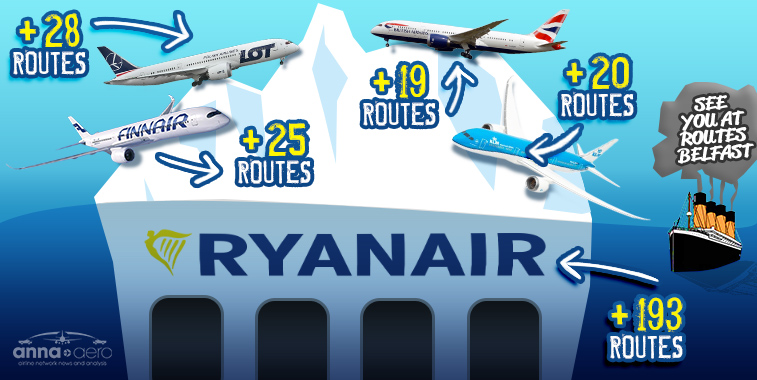 Believe it or not, anna.aero is not actually obsessed by Ryanair – but you can’t argue with the facts that 193 (net) new route launches swamp those offered by the (much-improved) top-four European flag carriers, over 20 years after the arrival of low cost airlines on the scene. Ryanair will be offering a “Route Surgery” at the FREE-TO-ATTEND British-Irish Airports EXPO at the Birmingham NEC 7-8 June 2017.

Our recent analysis identifying those airlines that have started the most new routes at the start of the S17 season as usual revealed that Europe’s LCCs lead the way in these rankings. However, two European flag carriers (KLM and SAS) both made the top 15, while British Airways and Lufthansa both only just missed out. anna.aero has also noticed that, considering it operates from a capacity-constrained airport, British Airways has done quite well at growing its route network from London Heathrow during the last couple of years. This got our data elves wondering which of Europe’s flag carriers has seen the biggest growth in its route network from its home base in recent times.

If this kind of analysis had been undertaken a couple of years ago the winner would most likely have been Turkish Airlines, but due to recent events in the country the airline’s network growth has slowed somewhat, though it still serves more destinations non-stop from its Istanbul Atatürk hub than any of its rivals do from their hubs. However, the European flag carrier airline that will have celebrated the most new route launches in the last two years, come 31 December 2017, will be LOT Polish Airlines, which has seen its network from Warsaw Chopin grow by 28 destinations from 46 in 2015 to 74 in 2016-17. Many of these ‘new’ routes are actually service resumptions after the carrier cut routes as part of a deal with the EU regarding financial support. LOT was given permission to grow its route network once more from the beginning of 2016 and since then the Star Alliance member has been busy making up for lost time. While the rapid network growth is indeed impressive it is worth noting that way back in 2010 the airline was already serving more than 70 destinations non-stop from the Polish capital. 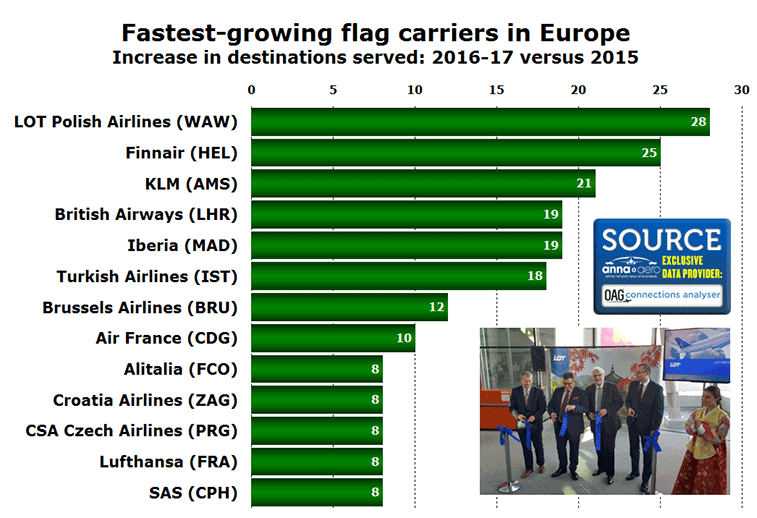 Finnair’s rapid growth from its Helsinki base has been more genuine, with the oneworld carrier starting several, low-frequency, seasonal, leisure destinations to its network in S16 and S17. In 2016 the airline began new routes to Billund, Edinburgh, Fukuoka, Guangzhou, Preveza, Puerto Plata, Pula, Rimini, Santorini, Skiathos, Varadero, Varna, Verona and Zakinthos. This year it has already added service to Alicante and Reykjavik/Keflavik with additional new connections to Astana, Corfu, Goa, Havana, Ibiza, Menorca, Puerto Vallarta and San Francisco set to begin before the end of the year. 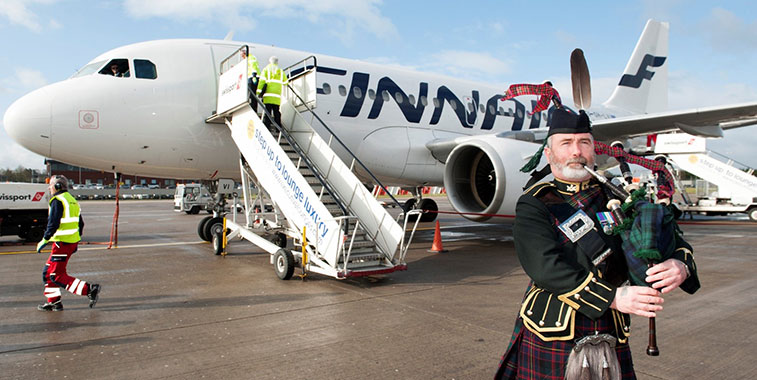 Can you guess where this new Finnair route was being celebrated? Yes, last April Finnair resumed service to Edinburgh, one of 25 new destinations added to the oneworld carrier’s network during 2016 and 2017. Only LOT Polish Airlines has launched more new routes (28) among Europe’s flag carriers but, in the case of the Warsaw-based carrier, many of them were resumptions of routes previously served.

In terms of destinations served non-stop, Turkish Airlines is way out in front among Europe’s flag carriers with non-stop flights in 2017 to almost 270 destinations, more than any other airline from a single airport anywhere in the world. In Europe, Lufthansa is in a clear second place with its Frankfurt hub, though the battle for third place is pretty close between Air France, British Airways and KLM. A total of 10 national airlines offer non-stop flights to at least 100 destinations. The main airports in Denmark (Copenhagen) and Sweden (Stockholm Arlanda) both offer almost 90 destinations with SAS. However, the Scandinavian carrier’s network from Oslo is rather smaller with fewer than 60 destinations served. 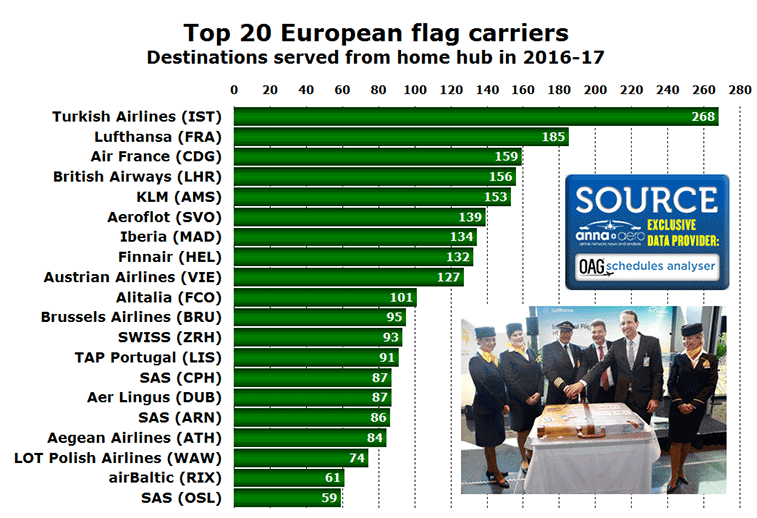 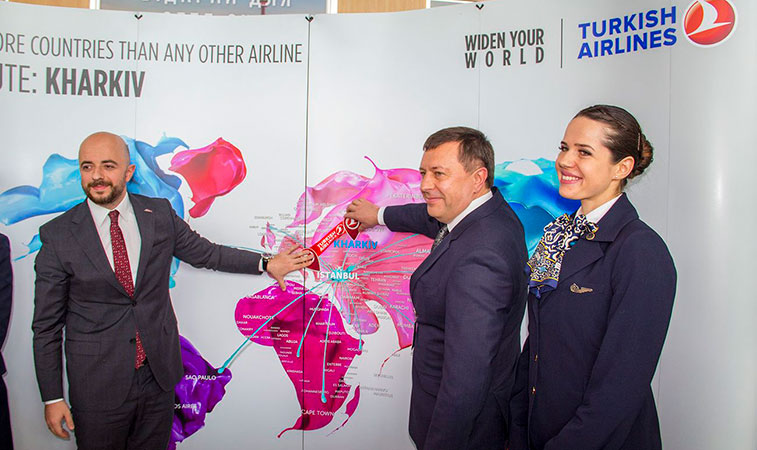 On 30 March 2017 Turkish Airlines launched a new route to Kharkiv in Ukraine. While the Star Alliance carrier has faced a number of challenges in the last 18 months, it continues to launch new routes. In 2017 the Turkish flag carrier will be connected non-stop to almost 270 destinations from its Istanbul Atatürk hub.