Volotea celebrates five years of flying; fleet of 28 aircraft expected to carry 4.3 million passengers on over 240 routes in 2017 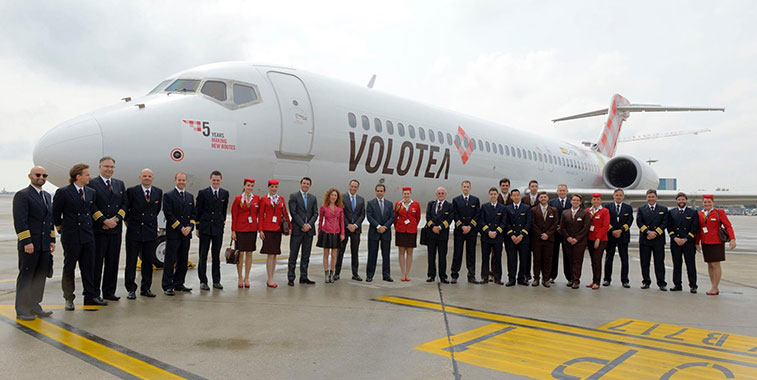 Volotea celebrated its fifth anniversary with this photoshoot. According to our analysis, since launching on 5 April 2012 the carrier has started 269 routes in its first five years with another 30 routes set to start before the end of the year. The airline’s original fleet of 125-seat 717s (of which it has 18) has now been augmented by 10 150-seat A319s.

On 5 April 2017 Volotea celebrated five years of flying. Headquartered in Barcelona, the carrier was formed in 2012 by the founders of Vueling, Carlos Muñoz and Lázaro Ros. Originally operating 125-seat 717s only, the carrier’s fleet has expanded to include a growing number of 150-seat A319s. This summer it will operate a total of 28 aircraft; 18 Boeings and 10 Airbus, with 40% of the airline’s flights being operated on the A319s. In January, the LCC carried its 10-millionth passenger and expects to transport around 4.3 million passengers in 2017.

The airline’s business model is to connect mostly unserved markets from airports in France, Italy and Spain usually with fairly low weekly frequencies. This summer the carrier will operate from nine bases; four in France (Bordeaux, Nantes, Strasbourg and Toulouse), four in Italy (Genoa, Palermo, Venice Marco Polo and Verona) and one in Spain (Asturias). The most recent of these, Genoa, opened on 11 April.

Impressively, by the end of 2012, less than nine months after launching, Volotea had already operated services on 89 routes involving 57 airports. In subsequent years the number of airports served has grown relatively modestly, but the number of scheduled routes flown has almost trebled. According to our analysis of OAG data, by the end of 2017 Volotea will have operated on 298 routes since its launch. 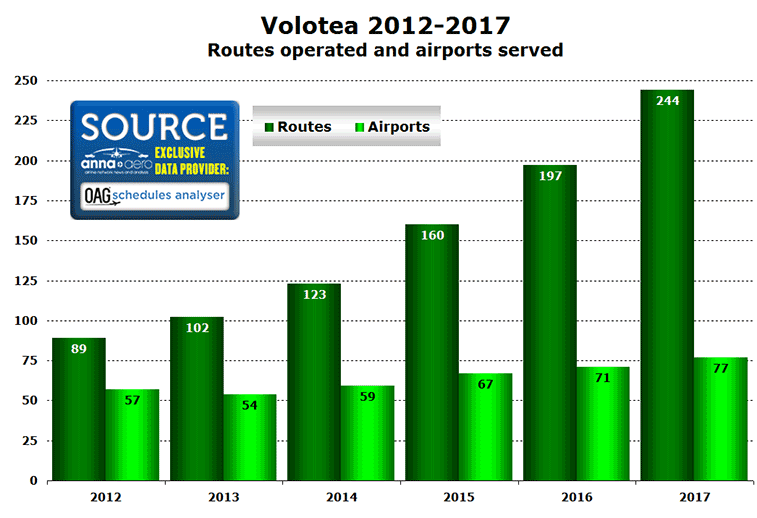 One thing that has been evident since the airline’s launch is its focus on only operating routes when there is sufficient demand. As a result Volotea’s operations are extremely seasonal with the carrier operating more than five times as many flights during the peak summer months (July and August) as it does in February and November. In fact, the airline’s seasonality profile is becoming more extreme. In the first quarter of 2017 it has operated virtually the same number of flights as in 2016 Q1, but in the second and third quarters of this year the number of scheduled flights is set to grow by 21%. 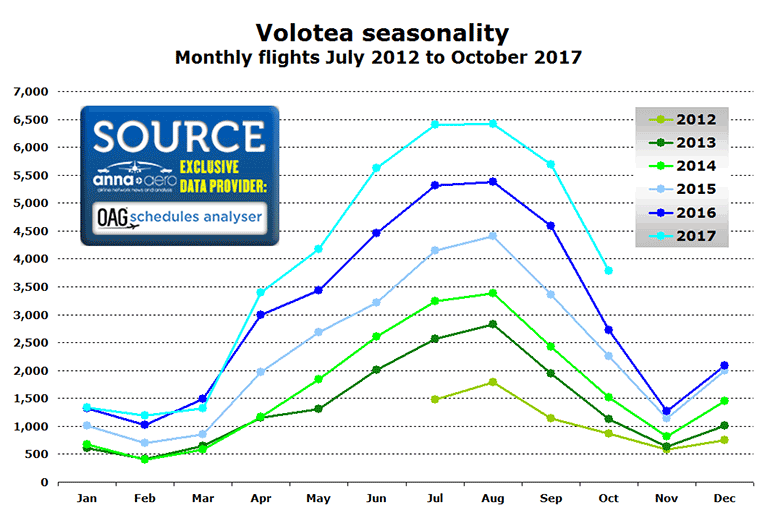 One of the airline’s main characteristics, similar to that of Allegiant Air in the US, is the low frequency at which most of the airline’s routes operate. In addition, rather than operate for the whole of the summer season (end of March to end of October), the carrier has no problem operating routes for much shorter periods. The following graph shows how many routes are operated, at what weekly frequency, during the first week of the summer months. 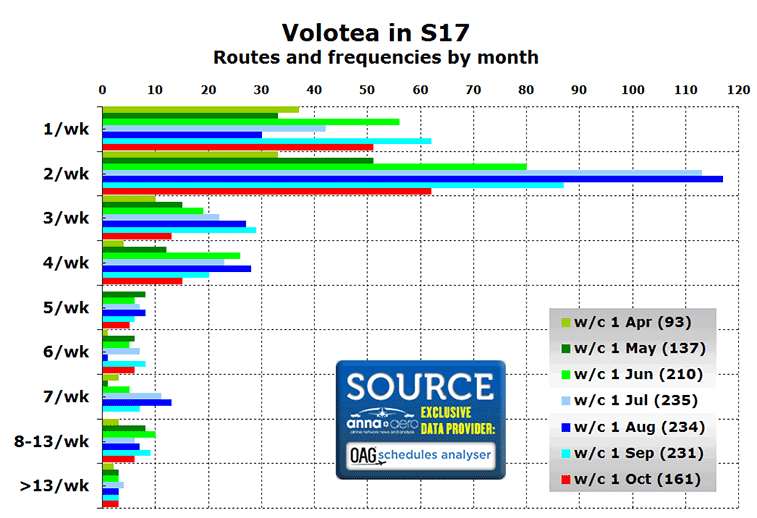 At the beginning of the summer season Volotea operates just 93 routes, increasing to 137 by the beginning of May and 210 by the start of June. In the peak summer period the LCC is operating over 230 routes before dropping back to 161 by the start of October. Almost half the routes in the peak summer period are operating with just two flights per week. In contrast, just three routes are flown at least twice-daily, with Verona to Catania being Volotea’s busiest route. This operates with up to four daily flights during the summer. 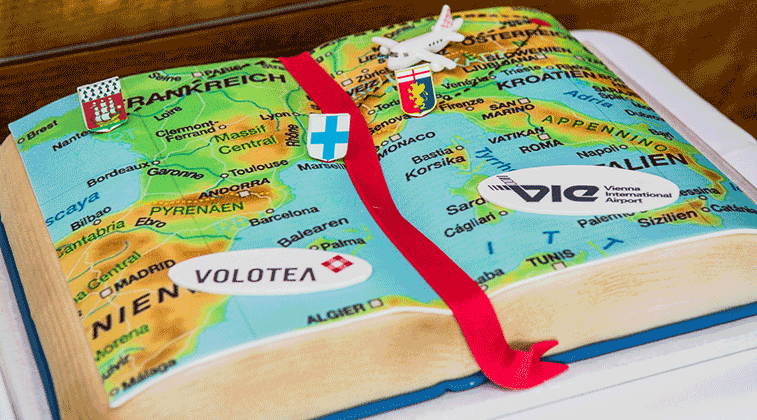 Vienna joined the Volotea network this summer with links from Genoa, Marseille and Nantes. This splendid cake was baked at the Austrian airport to celebrate the event.

Analysing OAG data for the whole of the S17 season confirms the importance of French and Italian airports to the airline’s network. Of the airline’s top 15 airports by flights this summer, seven are in Italy (shown in red), six are in France (shown in blue) and two in Spain (shown in orange). Although Venice Marco Polo has the most Volotea flights, the airline offers more seats from Nantes due to the majority of that airport’s flights being operated on the airline’s larger A319s. The airport where spotters will have to pay most attention to see a Volotea aircraft this summer are Kos and Rhodes in Greece from where the airline is operating just six scheduled flights. 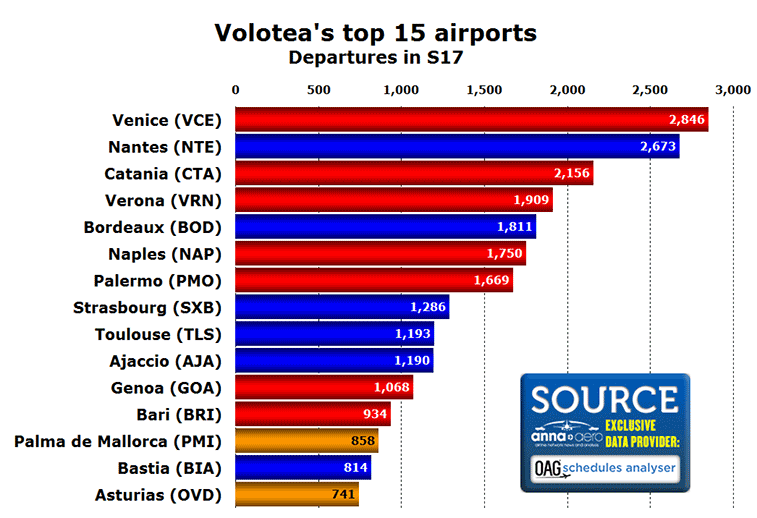 The same analysis for W16/17 shows the top airports in winter to be (in order) Catania, Verona, Naples, Strasbourg, Palermo, Venice Marco Polo and Nantes. A total of 47 airports were served in W16/17, with 10 of those airports welcoming fewer than seven flights across the whole of the winter season. 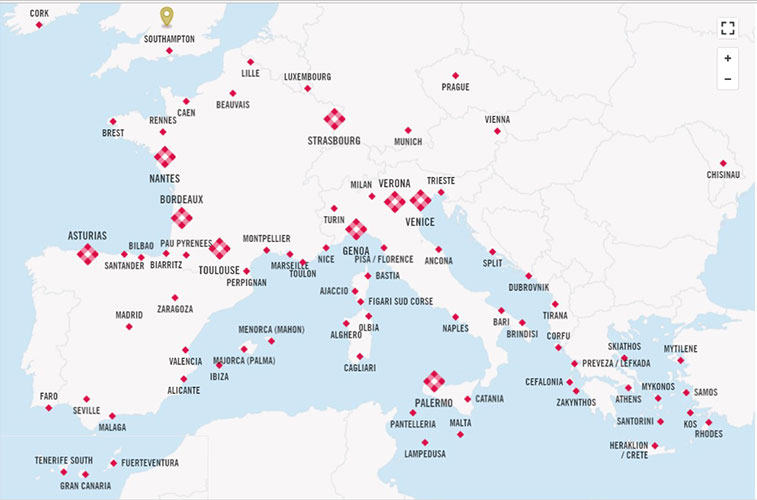 This summer Volotea will operate its 240-plus routes from nine bases across Europe; four in France, four in Italy and one in Spain. The airline’s longest sector at 2,523 kilometres is from Nantes to Santorini while its shortest is the 134-kilometre hop from Athens to Mykonos.