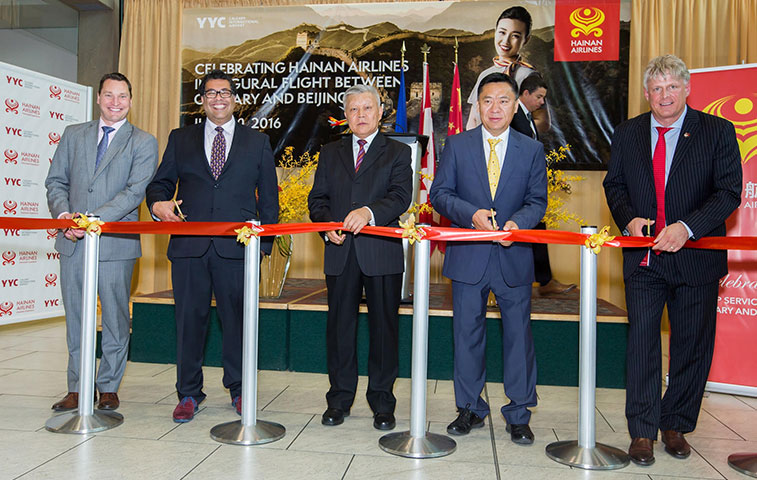 On 30 June 2016 Hainan Airlines started three times weekly non-stop service from Beijing to Calgary, an event that was celebrated with a ribbon cutting ceremony. With new services to London Gatwick (by WestJet) and Zurich (by Edelweiss Air) international (non-US) traffic grew by almost 9% at the Canadian airport to 1.6 million in 2016.

Calgary International Airport is Canada’s fourth busiest (after Toronto Pearson, Vancouver and Montreal) handling 15.7 million passengers in 2016. This was up 1.3% compared with the previous year. Domestic traffic was up 1.7% to 11.2 million, transborder (US) demand fell by 3.4% to 2.9 million, while international traffic grew 8.7% to 1.6 million. The biggest city in the province of Alberta, Calgary has a population of around 1.3 million people and hosted the Winter Olympics in 1988. The city grew quickly after oil was found in Alberta and it is a major player in the country’s oil and gas industry. It is also the home airport for Canada’s second biggest airline, WestJet, which started operations from the city on 29 February 1996. 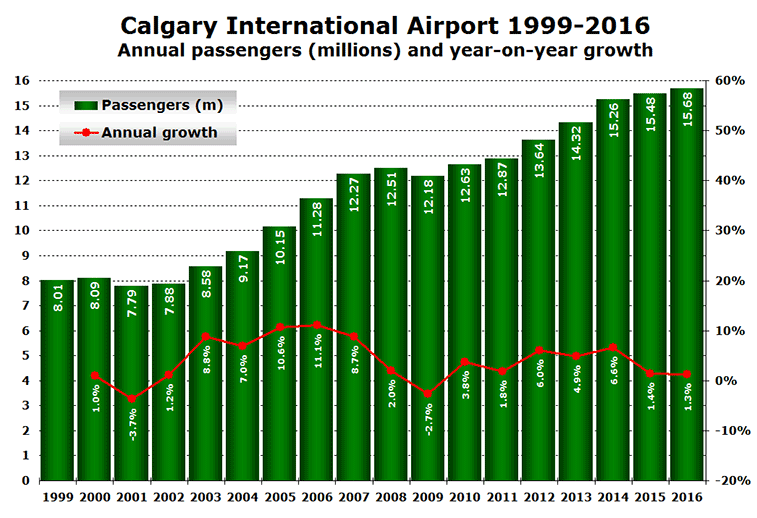 Since 1999, the airport has only twice reported a year-on-year drop in traffic, in 2001 (-3.7%) and 2009 (-2.7%). Since 2001 passenger numbers have doubled. Last year’s growth in international traffic was helped by new routes operated by Hainan Airlines (from Beijing), Edelweiss Air (from Zurich) and WestJet’s new transatlantic service to London Gatwick.

The airport’s seasonality profile has been remarkably consistent in recent years. Using anna.aero’s Seasonal Variation in Demand (SVID) calculator Calgary has scored an “Excellent” 0.84 in 2014, creeping up to 1.06 in 2015 and 1.09 in 2016. The first two months of 2017 suggest no great changes in the airport’s demand profile for 2017 with passengers up 2.2% in January and down 0.1% in February. 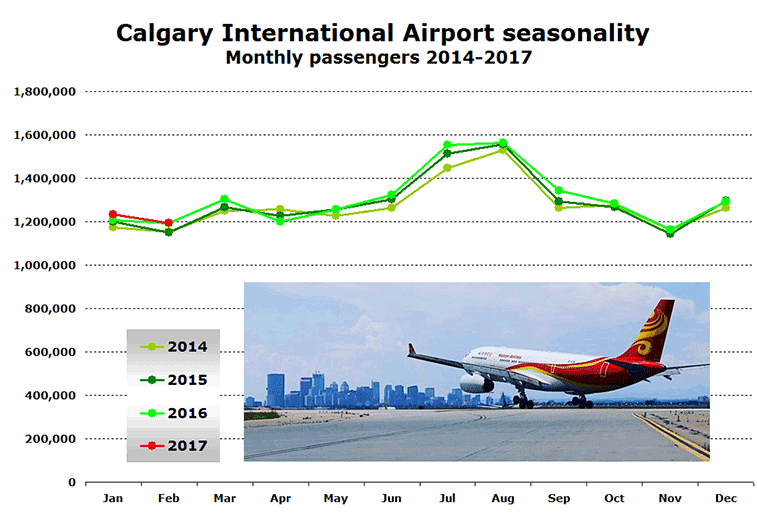 Toronto and Vancouver battle to be #1 in Calgary

The busiest routes this summer from Calgary are Toronto Pearson and Vancouver, with Edmonton a long way behind in third place. According to OAG data the top eight routes in S17 based on scheduled seat capacity are all domestic (shown in dark green), with Houston Intercontinental in Texas being the leading non-Canadian (shown in bright green) route in ninth place. As the home of the US oil industry this is not entirely surprising. Two other US destinations, Las Vegas and Los Angeles, just creep into the top 15. Only London Heathrow in 13th position is a long-haul route (shown in blue). 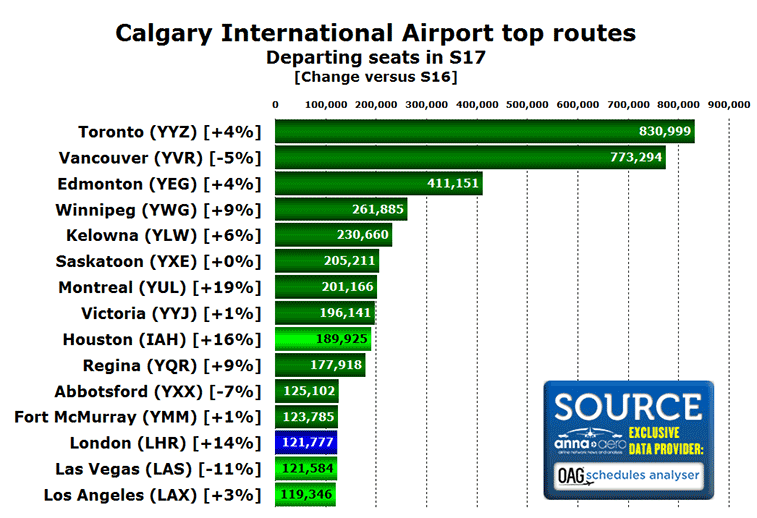 Of the top 15 routes by scheduled seats, only three are not currently showing capacity increases for this summer; Las Vegas (-11%), Abbotsford (-7%) and Vancouver (-5%). In total Calgary has scheduled services to 76 destinations this summer, of which 32 are in Canada, 22 are in the US and nine are in Mexico. The remaining 13 destinations include airports in the Caribbean, China, Europe and Japan. Non-stop flights to Asia are provided by Air Canada to Tokyo Narita and by Hainan Airlines to Beijing, a service which started just last summer. Apart from London Heathrow, other European airports served with non-stop flights are Amsterdam (weekly by Air Transat and daily by KLM), Frankfurt (by Air Canada and Condor), London Gatwick (by Air Transat and WestJet) and Zurich (by Edelweiss).

New services already announced for this summer include WestJet launching a new US route to Nashville in May, which will be operated twice-weekly. A few weeks later, on 1 June, Aeromexico will begin flights from Mexico City, the SkyTeam carrier’s first route to Calgary.

WestJet bigger than Air Canada at its home base

Toronto Pearson is now WestJet’s busiest airport in terms of flights and seat capacity, but Calgary, where the airline is headquartered, ranks second. Here it is almost 50% bigger than Air Canada, operating a network of 54 routes this summer, of which 26 are in Canada, 16 are in the US and eight in Mexico. The two big Canadian carriers go head-to-head on 16 domestic routes, six US routes and two to Mexico. There are six Canadian carriers operating in Calgary, shown in bright green on the graph. 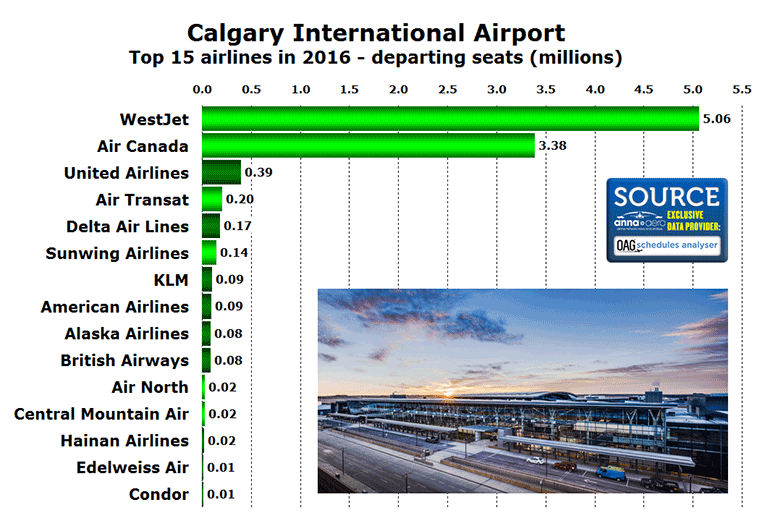 The top two carriers in 2016 accounted for over 86% of the airport’s total scheduled seat capacity. Leading non-Canadian carrier was United Airlines which, like Air Canada, is a member of the Star Alliance. The US carrier serves its hubs in Chicago, Denver, Houston and San Francisco. American Airlines (only operating from Dallas/Fort Worth) and Delta Air Lines (from Minneapolis-St. Paul, Salt Lake City and Seattle-Tacoma) both have a significantly smaller presence in Calgary. Both Hainan Airlines and Edelweiss were new airlines for Calgary in 2016. 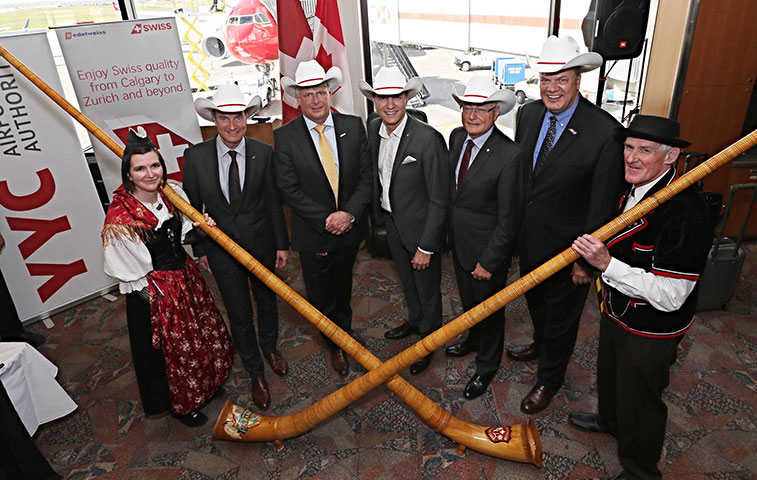 On 29 May 2016 Edelweiss Air began non-stop flights from Zurich to Calgary. The twice-weekly service, operated in conjunction with SWISS, will be flown again this summer by the carrier’s A330-300s. Zurich is one of a handful of European destinations served non-stop from Calgary which includes Amsterdam, Frankfurt and London.