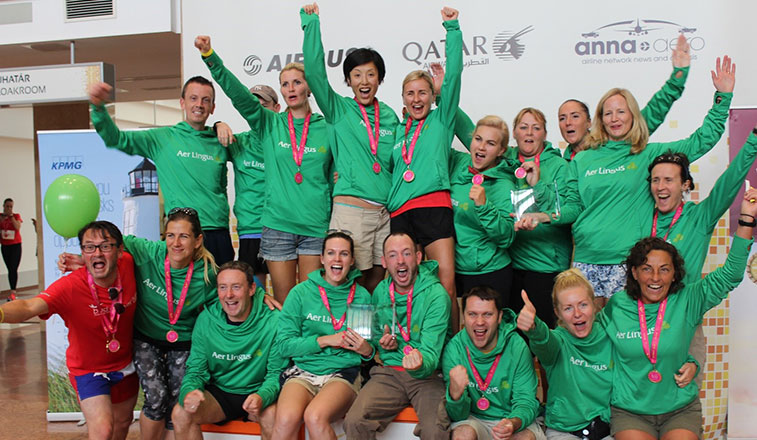 “We’re going for the hat trick!” Aer Lingus, ‘Fastest Airline in the World 2014 & 2016’, is ready to take on any challengers and looking to claim the coveted title for a third time. Taking place on Saturday 2 September 2017, the Budapest Airport-anna.aero Runway Run – a 5 and 10km race – is the air transport industry’s premier charity-sportive event.

Declared the “Fastest Airline in the World”, Aer Lingus proudly raised the team trophy in 2014 and 2016. Having only been knocked off the podium once (by SWISS in 2015) the Irish flag carrier is determined not to let the title slip out of its hands this year. Already entering a team of 12, some of which return for their fourth race and with runners still to enlist, the IAG airline will be back on Budapest Airport’s runway this September looking for a hat trick.

Think you can challenge Aer Lingus, and run off with the title of “The Fastest Airline in the World”? If you love the idea of running down the runway in the awesomely beautiful city of Budapest then register your place now:

All Budapest Airport-anna.aero entry fees are entirely donated to charity, equally split between Anthony Nolan and the Hungarian SUHANJ! Foundation. With Airbus once again stepping up to be main title sponsor, and Ryanair launching the fundraising efforts last week, the organiser’s team is already looking at smashing the mammoth amounts raised in previous years.

It’s all for charity…

All Budapest Airport-anna.aero Runway Run entry fees – just €30 before 1 July – are entirely donated to international child cancer causes and a Hungarian charity assisting the inclusiveness of handicapped people in sports. Besides 10 air transport industry trophies every finisher receives “The Bron’s Medal” named for Brontë “Bron” Hogan, the anna.aero publisher’s 12-year-old daughter, who passed away in 2011 after a five-year battle with leukaemia.

As most airlines and airports already have major charity commitments, there’s no need for participants to raise big cash sponsorship targets – competitors just have to pay an entrance fee, only €30 per runner, with 100% of this sum donated to the benefiting charities.