By end-2017 Qatar Airways will serve 19 more destinations than Emirates; latter has 70+ more aircraft; bilaterals holding it back 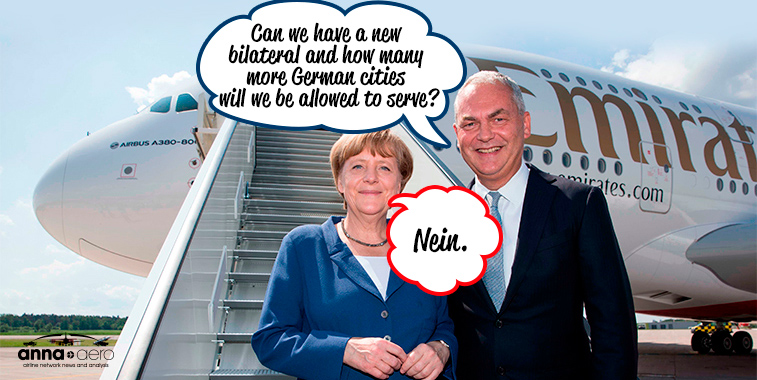 In May 2014 Thierry Antinori, Emirates’ EVP and CCO greeted German Chancellor Dr Angela Merkel at the steps of the Emirates A380 that was on display at ILA Berlin. Interestingly the German city is the #1 unserved O&D market from Dubai. However, it is not served due to the bilateral restrictions between Germany and the UAE. With nearly 1.5 million potential passengers (O&D + connection demand) to be captured from Berlin, it must be frustrating for Emirates knowing it cannot exploit this market, while rival Qatar Airways is.

The world’s leading operator of the 777-300 and the A380 – Emirates – has only two new destinations lined-up to commence this year, with those being Zagreb in Croatia (starting 1 June) and Phnom Penh in Cambodia (1 July). Fellow MEB3 carrier Etihad Airways has no new routes planned for 2017. Both have been overshadowed by the final carrier in the collective – Qatar Airways – with it scheduled to begin six new routes before the end of 2017: Chiang Mai (begins 31 October); Dublin (12 June); Nice (4 July); Skopje (17 July); Tabuk (19 June); and Yanbu (9 May). Not only that, but the Qatari airline has also planned its next destinations for 2018, with San Francisco, Cardiff, U-Tapao, Chittagong, Mykonos, Malaga, Accra, Lisbon, Abidjan, Prague, Kiev and Mombasa all being confirmed to begin at some point next year. So with Qatar Airways already having 18 cities ready to join its network within the next 18-24 months, how can Emirates catch-up with its Middle East rival?

So far Emirates only has Zagreb and Phnom Penh lined-up to join its network. The airline has been slow to announce new routes, instead choosing to increase capacity on existing services. One city which was meant to join the network last year was Panama City. However, the route, which was scheduled to be launched in February 2016, did not begin, and was pulled from the schedule weeks before it was due to commence.

Of course the leading factor to the MEB3’s successes is the demand for connection traffic between their respective hubs in Abu Dhabi, Doha and Dubai. But there is also the need to consider O&D traffic, which is the factor that anna.aero’s data elves have looked at first in regards to future Emirates destinations. The leading unserved O&D market from Dubai is Berlin, with an estimated 30,000 passengers travelling between Berlin Tegel and Dubai in 2016. Berlin is currently served by Qatar Airways. However, the current bilateral air transport agreement between Germany and the UAE limits Emirates’ number of landing points in Germany to four, with Düsseldorf, Frankfurt, Hamburg and Munich already served. The airline would be free to add Berlin, but it would have to give up one of its existing destinations. Until a new agreement between the two nations is agreed upon to allow Emirates, and also Etihad Airways, to expand operations in Germany, the 30,000 passenger market will remain unserved. What is even more stressful for the potential of a Berlin service with Emirates is that there is also a sizeable market of 1.4 million passengers that travelled indirectly from the German capital to Emirates destinations in Asia, Africa, Middle East and Oceania last year, making up approximately 98% of the overall potential market size from Berlin.

Following Berlin, the next destination Emirates should consider is Montreal. The Canadian city ranks 13th in relation to just O&D traffic from Dubai, but with its potential connection traffic demand (over 780,000 annual passengers), it would logically become the next likely destination to join Emirates’ network. In 1999 Canada and the UAE signed their first air agreement, under which Emirates and Etihad Airways would be allowed to fly into Canada six times a week. In October 2007 Emirates began offering three flights a week between Dubai and Toronto. Soon after this it began requesting that Canada allow increased flights to the country as part of an expansion plan to service increased demand between Canada and the UAE, citing the 27,000 Canadians residing in the UAE and important trade relationships between the two countries. However, to this day the agreement has not changed, with Emirates and Etihad Airways only offering three weekly flights between their hubs and Toronto Pearson. With the carrier also cutting capacity to the US (blaming the laptop ban as the reason for cutting capacity), it seems that any future destinations in North America seem unlikely at the moment. 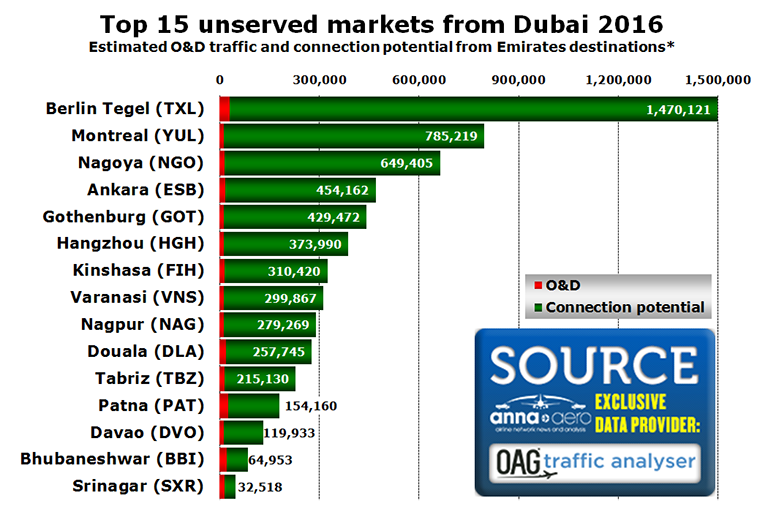 Interestingly the third airport in the list – Nagoya – already has a history with Emirates. The MEB3 carrier operated non-stop flights between Dubai and Nagoya until 28 March 2009, a route that it flew four times weekly.

Of the airports with the greatest O&D potential, Srinagar in India is the one that is showing the least demand for connection traffic, with that demand expected to only be around 69% of what Emirates could potentially carry on the route. Now that we have discovered the top unserved O&D markets from Dubai, we now identify the world’s busiest airports without an Emirates service.

Below are the top 15 airports in the world that do not yet have a service with Emirates, with the leading being the world’s largest airport, Atlanta, a market already served by Qatar Airways. Of the top 15, seven (highlighted in light green) are in the US, meaning that due to political issues these are not likely to be at the top of Emirates’ to serve route list at present. Taking out US destinations, that leaves Chengdu as the world’s largest airport without an Emirates operation, followed by fellow Chinese airports Kunming and Shenzhen. According to the airline, it carried 1.3 million passengers on flights to and from China in 2015/16, growing from an initial service to Shanghai that began in 2004. The 2013 UAE-China Air Services talks provided no immediate opportunity for Emirates to increase frequencies to Beijing, Shanghai and Guangzhou. However, Emirates was given the rights to serve Yinchuan and Zhengzhou and commenced a four times weekly service to these destinations in May 2016. Emirates has stated that it would like to continue to expand operations in China by adding flights to a number of non-hub destinations. The airline has said that it is seeking additional rights to expand services in line with growing market demand for international connectivity, paying particular attention to the CAAC’s vision for greater connectivity beyond the gateway airports of Shanghai Pudong, Beijing and Guangzhou. 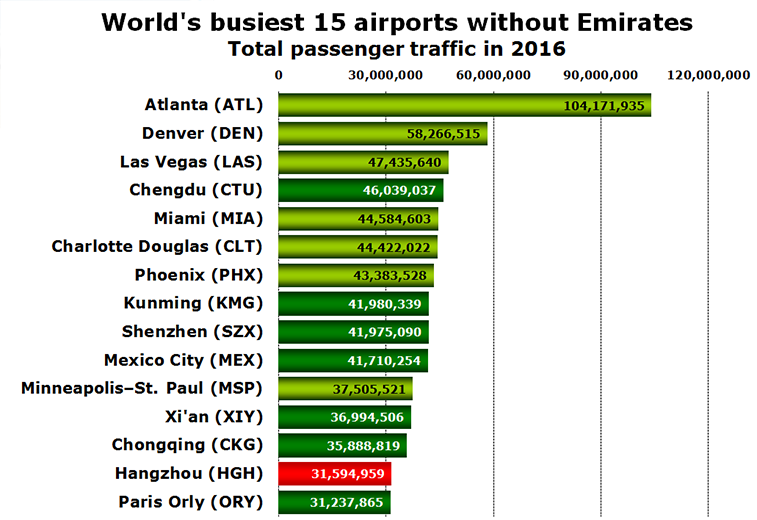 Highlighted in red is Hangzhou, as it is also one of the leading unserved O&D markets from Dubai in 2016. Now that we have looked at the world’s busiest airports without Emirates and those with the greatest O&D potential with Dubai, it is now time to look at the top airports with the greatest indirect traffic demand from Emirates’ current destinations. For this part of the analysis, we have excluded cities where another airport in that city already has an Emirates service (e.g Moscow Sheremetyevo as Moscow Domodedovo is already served), and US destinations due to Emirates’ current cutting of capacity to the country. It should also be noted that this also excludes Emirates destinations in the same geographical region as those analysed. 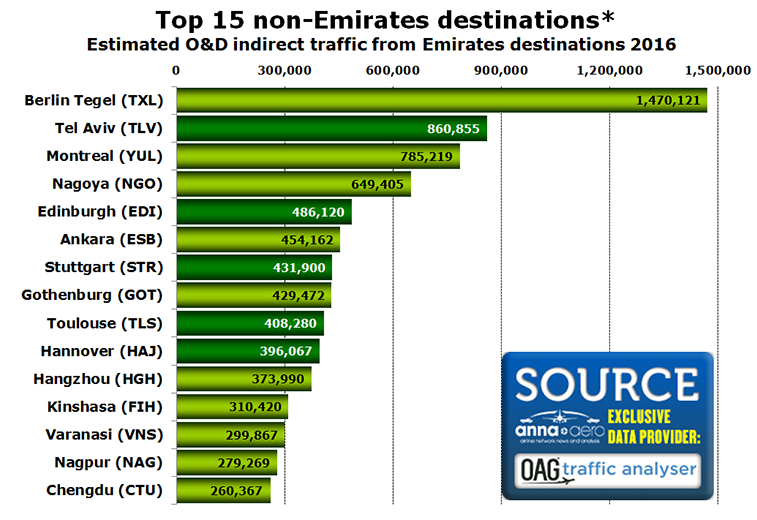 Source: OAG Traffic Analyser data. *Excludes airports where another airport in the city has an Emirates service, and also excludes US destinations.

With a demand of over 1.4 million, it is no surprise to see that Berlin Tegel is the leading airport without an Emirates service. However, due to bilateral agreements the carrier is unable to launch this route. With Stuttgart (seventh) and Hannover (10th) also making it into the top airports, these also cannot be launched until the agreements between Germany and the UAE have been renegotiated. Another route which may be difficult for the carrier to launch is Tel Aviv, the second-largest unserved Emirates destination, due to the conflicts of interests between Israel and Middle Eastern states. All routes in the top that are highlighted in light green have appeared in one of the other two graphs produced in this feature, for being either a leading unserved O&D destination from Dubai or being one of the world’s busiest airports.

Looking at the data, the leading airport which really should be joining Emirates’ network is Berlin Tegel. However, we know this is not possible at present, leaving it open for Qatar Airways. Taking Berlin and Montreal out of the equation, the airports which anna.aero suggests that Emirates should be looking to be adding onto its network are: Chengdu; Nagoya; Edinburgh; Ankara; Gothenburg; Toulouse; and Hangzhou. These are the most predominant as they are currently able to accept wide-body aircraft. Interestingly Chengdu and Edinburgh are already both served by Etihad Airways and Qatar Airways, while Ankara and Hangzhou are also served by the latter carrier. While Chinese routes cannot be launched at present, it seems to be the only market where the carrier is aiming to increase connectivity at present. If Emirates does consider single-aisle aircraft, then those destinations in the Indian sub-continent can be considered. If not, these may be good options for flydubai to consider.