Philippines AirAsia is #3 carrier in the Philippines; now operating 30 routes across 20 airports with a fleet of 16 180-seat A320s 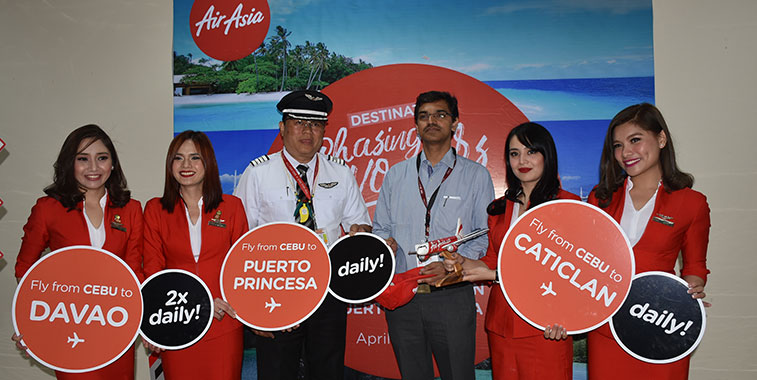 On 22 April 2017, Philippines AirAsia launched three domestic routes from Cebu, all served at least daily. The LCC now has around 11% of the domestic market, well behind Cebu Pacific Air (46%) and Philippine Airlines (33%). The carrier’s fleet currently comprises 16 180-seat A320s, two more than at the end of 2016. In total it serves 20 airports, 11 of which are outside of the Philippines.

The AirAsia Group’s operation in the Philippines is now known as Philippines AirAsia. The carrier (IATA code Z2) started out life as Zest Air before becoming part of the AirAsia family and being rebranded as AirAsia Zest. The airline took on its current name in January 2016. The LCC operates a fleet of 16 180-seat A320s, the most recent of which joined the airline in April of this year. According to AirAsia, the carrier transported 3.99 million passengers in 2016 at an average load factor of 87%, an increase of 11% compared with 2015 with the airline’s load factor improving by six percentage points. The average sector length jumped 10% to 1,109 kilometres, while the number of flights operated increased by 3% to 25,607. As a result ASKs (Available Seat Kilometres) grew by 14%, but RPKs (Revenue Passenger Kilometres) were up 22%. 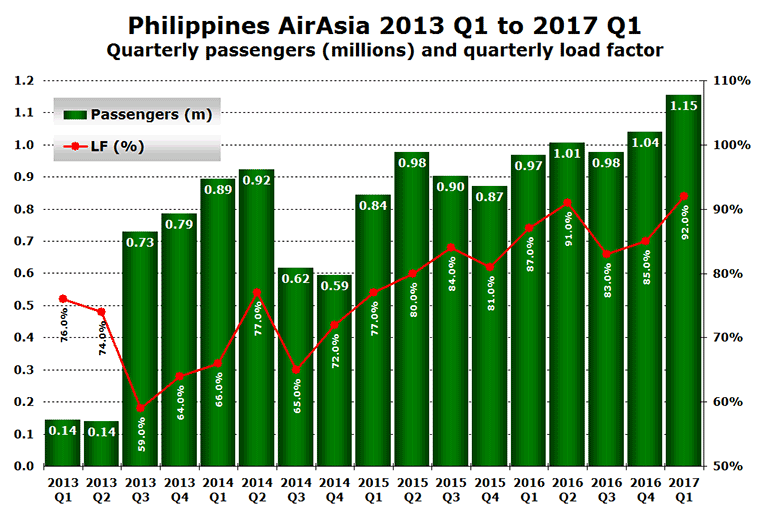 In the first quarter of 2017 the airline set a new record, handling 1.15 million passengers (+19%) at a load factor of 92% (plus five percentage points). According to anna.aero analysis of OAG schedule data for 2017 Q1, Philippines AirAsia has around 11% of the domestic market (well behind Cebu Pacific Air with 46% and Philippine Airlines with 33%) and around 4.6% of international seat capacity. Philippine Airlines (30%), Cebu Pacific Air (19%) and Cathay Pacific Airways (5.2%) are all bigger than the LCC in terms of international operations from the Philippines.

In the second quarter of 2017 the carrier has launched several new domestic routes; between Clark and Davao, as well as between Puerto Princesa and Davao. It has also started one, and resumed two, domestic links from Cebu. As a result, the airline’s network currently comprises 30 routes; the shortest just 283 kilometres from Cebu to Caticlan and the longest between Cebu and Kuala Lumpur, which clocks in at 3,029 kilometres. Of the 30 routes, 17 are served at least daily, with the 565-kilometre connection between Cebu and Manila having 51 flights per week. Cebu Pacific competes head-to-head on 22 of the airline’s 30 routes, while Philippine Airlines also provides direct competition on 22 routes. In the graph below domestic routes are shown in dark green with international routes in light green. 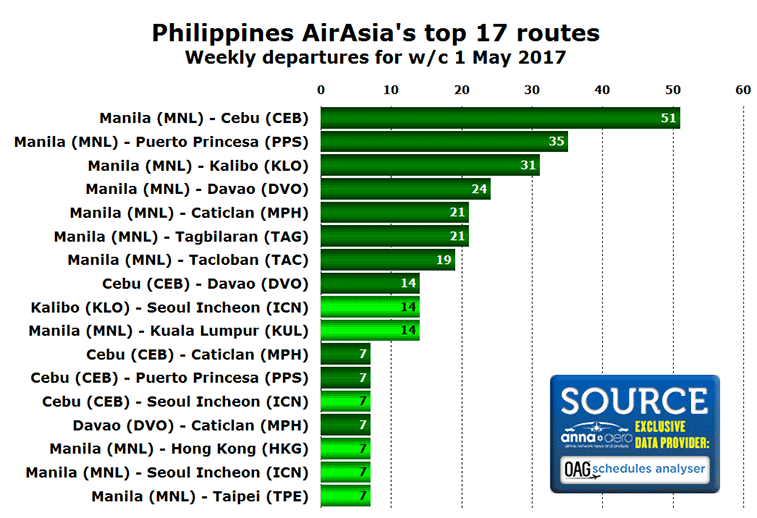 Philippines AirAsia serves 20 airports in May 2017

Philippines AirAsia currently serves 20 airports in all, nine of which are in the Philippines (shown in dark green), three are in China with two each in Malaysia and South Korea. In addition it flies to Hong Kong, Macau, Singapore and Taipei. Manila is the LCC’s busiest airport with 252 weekly departures followed by Cebu (97), Kalibo (57) and Davao (52). 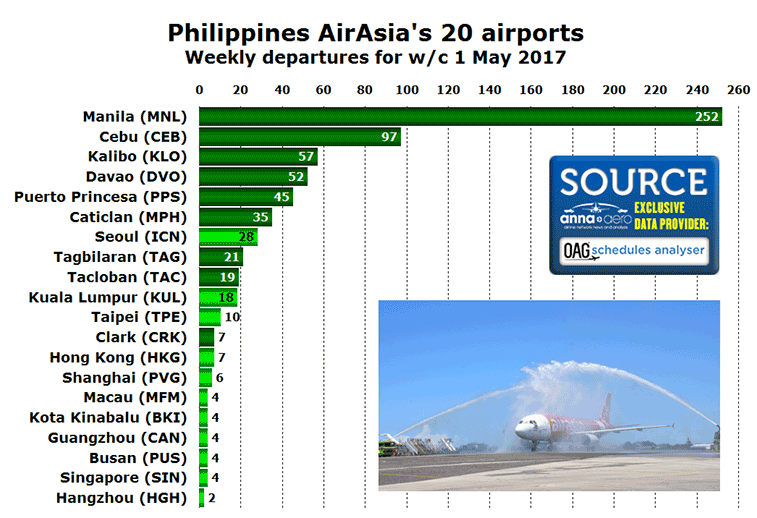 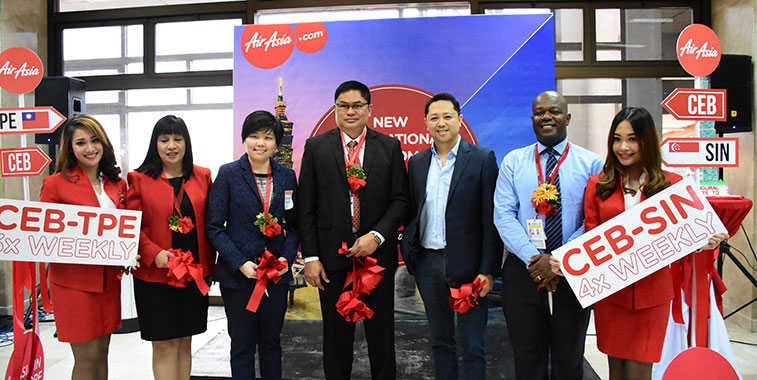 On 25 November 2016 Philippines AirAsia began connecting Cebu with Singapore (four times weekly) and Taipei (three times weekly). Singapore was a new route for the LCC, though it had started flights to Taipei from Manila a few days earlier.