anna.aero joins London Southend as it celebrates Flybe’s new connection to Milan Malpensa, one of 11 new routes with the airline 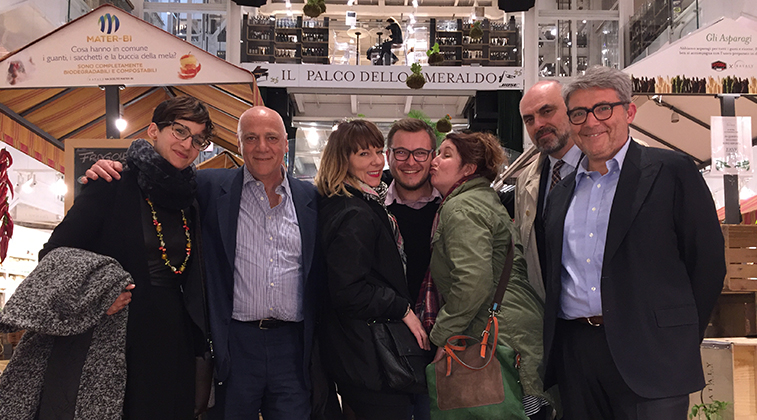 On 1 May Flybe, operated by Stobart Air, opened a new base at London Southend, placing two E195s at the London airport allowing it to open routes to 11 destinations, with one of those being Milan Malpensa. Along with Malpensa, services to Budapest, Cologne Bonn, Lyon, Prague, Venice Marco Polo and Vienna have also been launched this week from Southend with the carrier, while Dubrovnik, Perpignan, Reus and Zadar will launch in the coming days and weeks. Stobart Air already serves Caen, Groningen and Rennes from Southend on its fleet of ATR 72-500s. The result of Flybe’s basing of two E195s at Southend has meant that weekly seat capacity from the airport this summer has increased by 38% when compared to last summer (w/c 13 June 2017 v w/c 14 June 2016), and the destinations available has risen to 25 in 11 countries, up from 14 destinations last summer.

In order to celebrate Flybe’s (Stobart Air) services from Southend, anna.aero’s roving reporter Jonathan Ford was invited by the UK airport to take part in a celebration trip for the press to Milan. Of course Ford happily accepted the invitation, not only because this would mark his first flight from Southend Airport, but also because of the opportunity to have a go on a Segway for the first time! 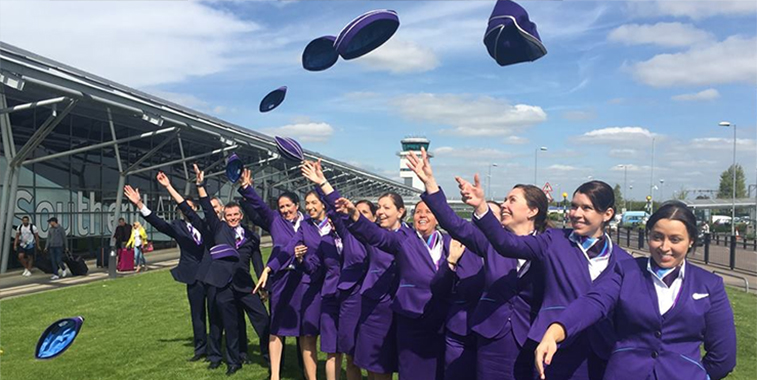 In order to make the new Flybe–Stobart Air base operational, the carrier has employed a series of new crew to help operate the flights, with 14 of them graduating with their wings in mid-April. They are seen celebrating their graduation outside Southend Airport’s terminal. In 2016 0.87 million passengers passed through Southend. However, with Flybe’s new services, it should pass the one million passenger barrier in 2017. 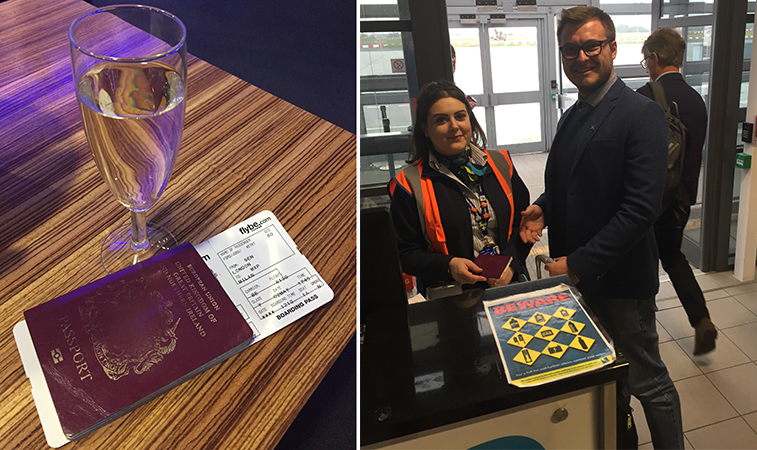 For anna.aero’s roving reporter Ford, this would be his 21st flight for work this year, with his previous work flight having been the week before, also with Flybe, to Birmingham from Belfast City after having attended Route Europe. Before boarding for Milan, Ford, along with the other members of the press delegation that was travelling to Italy, was invited to the Skylife Lounge at Southend Airport to enjoy a class of prosecco before boarding. For Ford, this would also be his first flight from Southend. Flight BE 6130 to Malpensa boarded on time at 17:45 from Southend. This was the second service that the airline had operated on the route, with the inaugural flight having taken place on 1 May. There were 85 passengers on the flight on 2 May to Milan (not including three ‘FTJs’ – failed to join), representing a load factor of 72%, very respectable for a new service. Having boarded through Gate 6 at Southend, passengers made their way to the aircraft. Parked next to Flybe’s E195 was an easyJet A319 that would operate EZY 7405 to Amsterdam that evening. 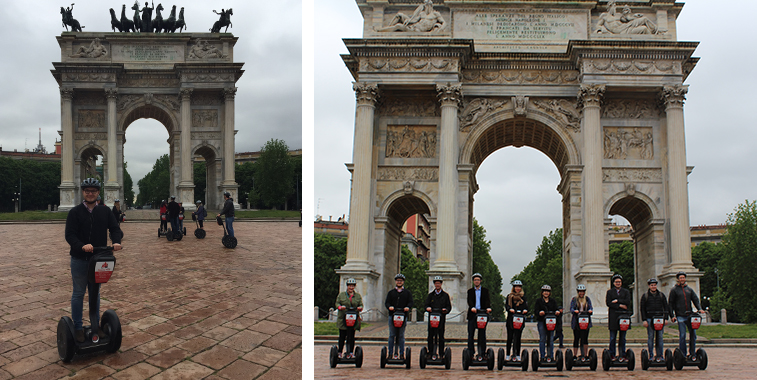 On the first day of the visit to Milan, those on the trip took part in a Segway tour of the city, marking Ford’s first outing on a Segway, along with many others from the Southend delegation. Among the sites visited in the city was the Porta Sempione. The gate is marked by a landmark triumphal arch called Arco della Pace (“Arch of Peace”), dating back to the 19th century, although its origins can be traced back to a gate of the Roman walls of Milan. 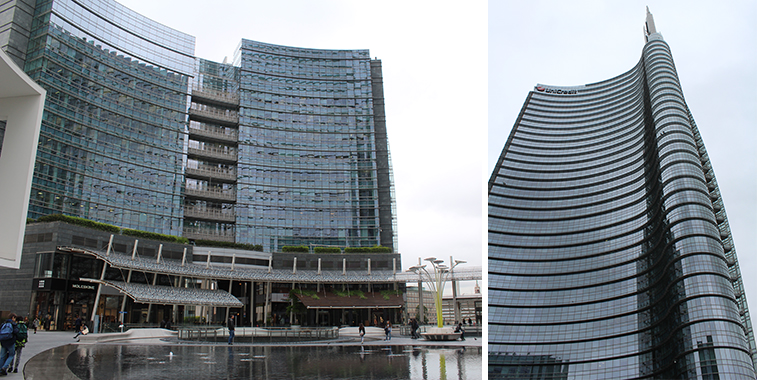 One of the other stops on the tour was Piazza Gae Aulenti, a 100-metre in diameter circle centre in the heart of Milan’s business district which opened in December 2012. A symbol of contemporary Milan, Gae Aulenti Square is the setting for various spot and photo services, as well as musical and social events, thanks also to the presence of the Unicredit Pavillion. One could mistake this spot for being the centre of Dubai, particularly with the Unicredit Tower, which opened in 2014, being topped with a spire that matches that of the Burj Khalifa. At 231 meters, the tower is the tallest building in Italy. 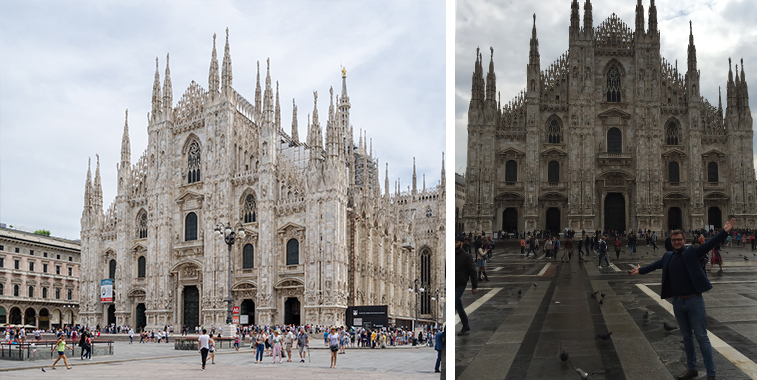 Another must-see in Milan is the Basilica cattedrale metropolitana di Santa Maria Nascente (Duomo of Milan), otherwise known as Metropolitan Cathedral-Basilica of the Nativity of Saint Mary. It is the largest church in Italy (St. Peter’s Basilica is in Vatican City) and fifth largest in the world.  According to a 2009 study, the cathedral is the most visited tourist attraction in Milan, with one of the visitors in 2017 being anna.aero’s Ford. He had also been there previously in 2013 while backpacking around Italy. On the final evening in Milan, both London Southend and Milan Malpensa airports went for dinner at Eataly, the largest Italian marketplace in the world, comprising a variety of restaurants, food and beverage counters, bakery, retail items, and a cooking school. The chain was founded in 2004 and opened in 2007 by Italian businessman Oscar Farinetti. The concept of the store brings the local products of Italy to a global audience, allowing those that are unable to afford to sell their products through their own funds on such a large scale. It is a must visit when going to Milan if you want to taste the best food from all around Italy in one location. anna.aero’s Ford would like to thank London Southend and Milan Airports SEA for a allowing him to take part in celebrating Stobart Air’s new service to Milan, in particular Tracey Jones, Brera PR & Marketing and Karin Donnelly, Marketing & PR, London Southend Airport.