Himalaya Airlines welcomed its third A320 direct from Airbus’ Hamburg plant on 31 March, with the aircraft being welcomed with a ceremony in Kathmandu. The aircraft, with the registration 9N-ALW, is the second brand-new aircraft to join the fleet in 2017. Vijay Shrestha, VP Administration for the airline, said of the aircraft’s arrival into the fleet: “2017 has been the year of achievements for Himalaya Airlines as we have welcomed our second aircraft on 31 January and launched two new sectors, Kuala Lumpur and Yangon, in February. With the arrival of a third A320, we plan to expand our global network and strengthen the air connectivity of Nepal to the international arena”. Himalaya Airlines has now added Dubai to its network since the third A320 joined the fleet in March.

Following on from 100 unit deliveries in February, Airbus and Boeing upped productivity in March, with both handing over a combined 136 aircraft, a 36% improvement on the total delivered in the previous month. When compared to March 2016, the total deliveries in the third month of this year were eight more than the 128 managed last year. Boeing is the leader with regards to aircraft handovers in March, with it distributing 74 units, 12 more than its European counterpart. While both handed over 47 narrow-body aircraft in March, Boeing managed to increase its lead over Airbus by handing over more wide-body variants. The result means that so far in the 2017 delivery race Boeing is leading Airbus 169 to 136 with regards to total unit handovers, a gap of 33 aircraft. In March, 69% of units delivered were single-aisle, with the remaining 31% wide-body. This compares to the 73% single-aisle and 23% wide-body ratio that was registered in the same month of 2016. 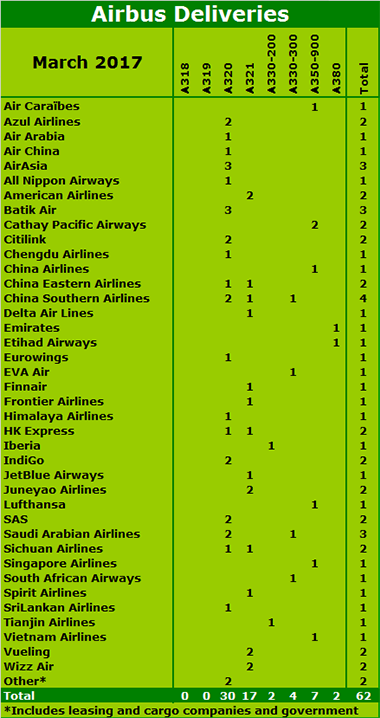 Airbus ended March with a total of 62 unit deliveries, 13 more than it delivered in February and five more than it did in the same month of 2016. For the third month this year, single-aisle deliveries were led by the A320, with 30 being handed over to 18 airlines and two leasing companies. The leading customers of the A320 in March were AirAsia and Batik Air, with both welcoming three units each into their retrospective fleets. Following the A320, the A321 was Airbus’ second most popular single-aisle type, with 17 being handed over. Of the 13 airlines which welcomed the A321, American Airlines, Juneyao Airlines, Vueling and Wizz Air were the leading customers, with all four welcoming two of the type into their fleets.

In relation to the wide-body market, Airbus handed over 15 units, five more than it managed in February and five more than it managed in March 2016. The leading aircraft type to be delivered was the A350, with seven being handed over to six airlines, with Cathay Pacific Airways taking the biggest share by accepting two units. Two A380s – one each for Emirates and Etihad Airways – two A330-200s and four A330-300s were also delivered in March. 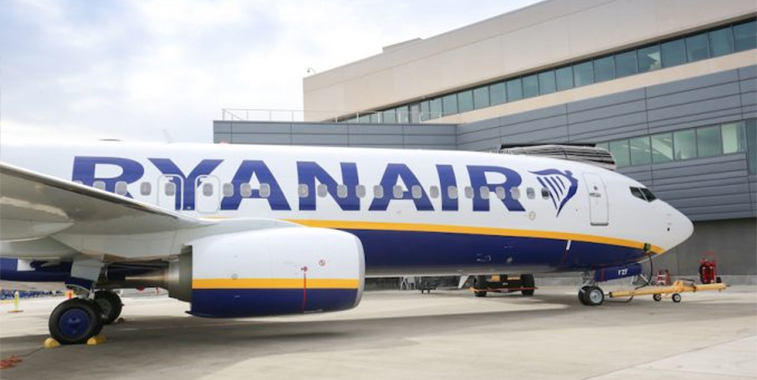 In March Ryanair welcomed its 450th aircraft, with it being seen here parked-up in Seattle before delivery. Mick Hickey, Ryanair’s COO said in a statement: “We are delighted to receive our 450th Boeing aircraft, which brings to 380 the number of Boeing aircraft in Ryanair’s current fleet. Ryanair is proud to partner with Boeing and has operated an all-Boeing fleet since 1994. We look forward to receiving many more aircraft in the years ahead from the manufacturer, including the rest of the ‘Next Generation’ 737-800s and 200 737 MAX ‘Gamechanger’ aircraft on order, as we grow out fleet to 585 by FY24.” 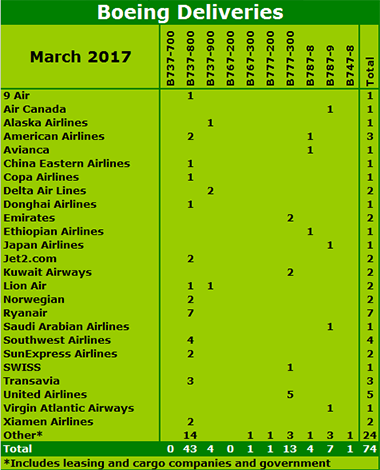 Boeing delivered 74 aircraft in March, 23 more than it delivered in February and three more than it managed to hand-over in March 2016. Of Boeing’s deliveries in the third month of 2017, 47 were single-aisle variants. The leading aircraft model of its single-aisle products was the 737-800, with 43 (10 more than in February) being handed over to 13 airlines and multiple leasing companies. The leading customer was Europe’s largest ULCC, Ryanair, with it welcoming seven of the type, the same as it did in the previous month. However, March was a significant month in relation to Ryanair deliveries, as it welcomed its 450th Boeing aircraft. Commenting on the arrival of the 450th aircraft to join Ryanair, Mick Hickey, the airline’s COO said in a statement: “We are delighted to receive our 450th Boeing aircraft, which brings to 380 the number of Boeing aircraft in Ryanair’s current fleet. Ryanair is proud to partner with Boeing and has operated an all-Boeing fleet since 1994. We look forward to receiving many more aircraft in the years ahead from the manufacturer, including the rest of the ‘Next Generation’ 737-800s and 200 737 MAX ‘Gamechanger’ aircraft on order, as we grow out fleet to 585 by FY24.” Other leading carriers to receive the 737-800 in March were Southwest Airlines and Transavia, with the former welcoming four and the latter three units respectively.

An analysis of the wide-body market shows that Boeing handed over 27 units in March, 12 more than its European counterpart. The leading model was the 777-300, with 13 being handed over to four airlines and three leasing companies. The biggest customer was United Airlines which welcomed five of the type into its fleet. Along with the 777-300, seven 787-9s, four 787-8s and one 747-8 were also delivered, while one 777F and one 767-300 were handed over to two separate cargo airlines.