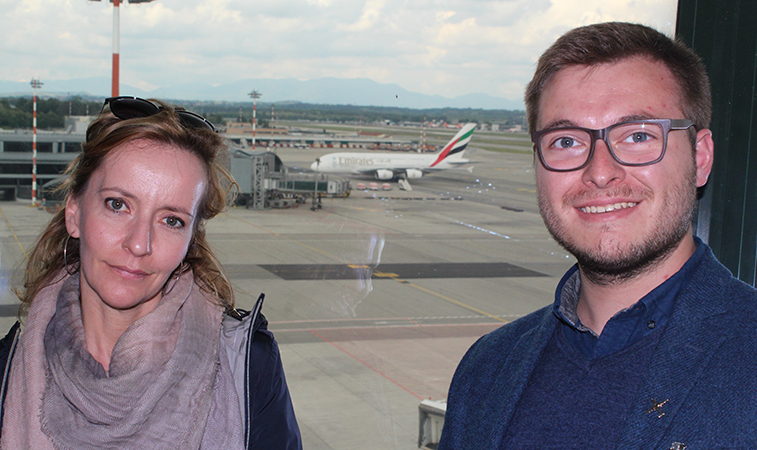 Last week anna.aero’s roving reporter and Assistant Editor Jonathan Ford visited Milan Malpensa Airport where he met with Laura Sogli, Network Analysis Manager, Milan Airports SEA, who gave him a tour around the airport. On the tour they stopped by the control centre where they overlooked the turnaround of Emirates flight EK 205 which operates via Malpensa on its way to New York JFK from Dubai. The MEB3 carrier now offers four daily flights from Malpensa, three to Dubai and one to JFK. Looking at weekly seat capacity for S17, Emirates is Malpensa’s third largest airline.

Milan Malpensa is the busiest of the three airports that serve Milan, with Milan Bergamo (11.2 million passengers in 2016) and Milan Linate (9.6 million) being the other two airports which serve the city. Last year Malpensa handled over 19.3 million passengers across its two terminals, which represents a 48% market share of all Milan traffic in 2016, with the city welcoming just over 40 million passengers.

By welcoming 19.3 million passengers in 2016, Malpensa witnessed an increase in traffic of 4.7% when compared to 2015. Looking at statistics for Q1 2017, growth for the year so far is much stronger than last year, with traffic up by over 11% for the first three months of this year, with a little over 4.4 million passengers using the airport. However, what is important is that most of this traffic is growing from an O&D perspective. “During the last winter season, Milan Malpensa welcomed 7.3 million O&D passengers, a record season for the airport,” commented Andrea Tucci, Aviation Business Development, Milan Airports SEA, to anna.aero at Routes Europe in Belfast last month. “This O&D traffic figure represents nearly 13% growth on the same season the year before.” Tucci commented that this was even more impressive considering it was natural growth. “In 2015 the EXPO was held in Milan and in 2014 Malpensa welcomed Ryanair traffic from Bergamo as it was closed for runway work, so this year is the first to have seen natural growth which makes this result even more impressive.” For this calendar year, the hope is that Malpensa will break the 20-21 million passenger barrier, which is achievable given the current recording for the first three months of 2017. 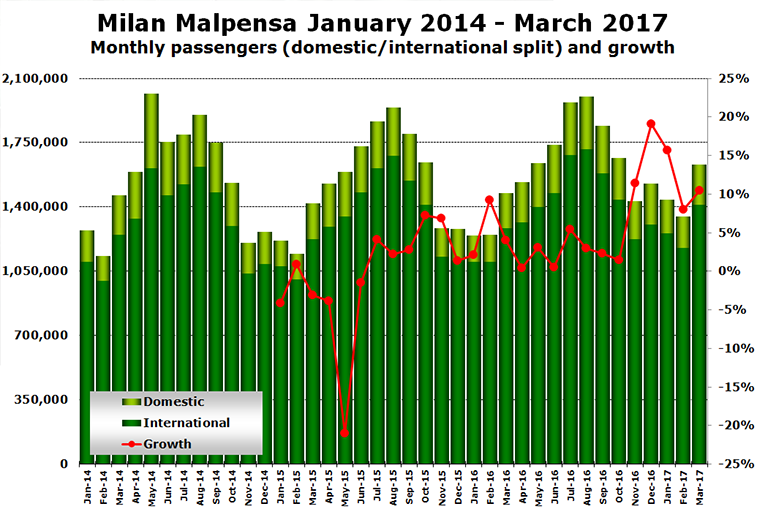 Seat capacity up 14% this summer

When referring to OAG schedules, this summer’s seat capacity from Malpensa has risen by 14%, matching the growth patterns of passenger traffic for the year so far, with just under 300,000 weekly one-way seats on offer, up from 259,000 weekly seats in June last year. The largest carrier at Malpensa is easyJet, with it occupying 29% of weekly seat capacity in S17. Malpensa is the airline’s joint-largest base in continental Europe, with it occupying 4.6% of monthly seat capacity in S17, the same as easyJet’s Geneva base, while London Gatwick leads with 12% of capacity. Last year easyJet carried 6.75 million passengers from Malpensa, with 4.6 million flying on international services and over 2.1 million on domestic routes. In recent weeks the airline has added new routes from Malpensa to Stockholm Arlanda, Granada and Santiago de Compostela, helping the UK LCC report a 3.1% increase in weekly seats this summer.

The next-largest carrier at the airport is Ryanair, an airline which has grown its weekly seat capacity from the airport by a mighty 189% in the last year, with it having been the airport’s 10th biggest carrier in S16. Looking ahead to the winter season, Ryanair will expand further from Malpensa by adding an extra seven routes, with its next destinations including Alicante, Eindhoven, Katowice, Lamezia Terme, Liverpool, Palermo and Valencia. Malpensa officially became a Ryanair base in December 2015. 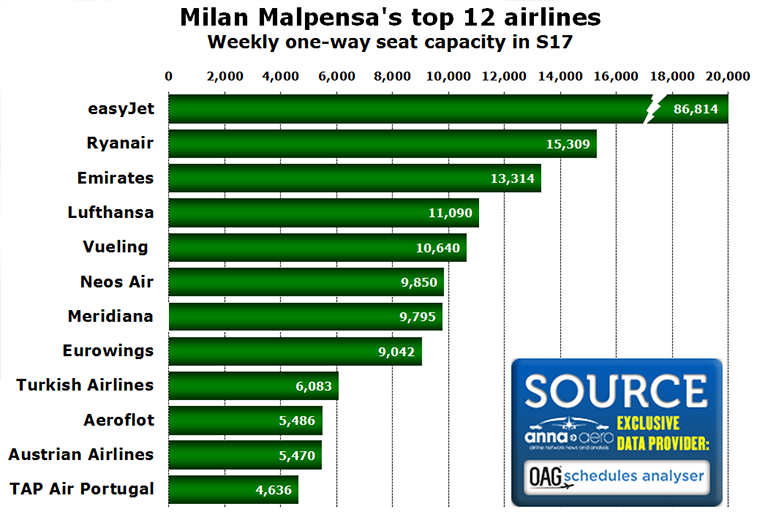 Outside of the top 12 many airlines are reporting growth, with one of those being Flybe, the carrier that brought anna.aero’s Assistant Editor to Malpensa. The carrier is reporting 45% growth in weekly seats for S17. In total 73 airlines are operating flights into Malpensa this summer, with the top 12 making up 63% of the overall seats when referring to OAG schedules.

Malpensa welcomes the return of Air France and KLM

On 26 March Malpensa Airport welcomed the return of two carriers after an absence of five years, with Air France beginning five daily flights from Paris CDG and KLM beginning a four daily service from Amsterdam.  As a result of both airlines’ return to Malpensa, Air France and KLM have become the airport’s 14th and 15th largest carriers respectively, with both of them sitting behind Italian national carrier Alitalia (which operates flights to Abu Dhabi, New York JFK and Tokyo Narita from Malpensa) in 13th. It should be noted that Air France and KLM still serve Milan Linate.

With the arrival of Air France on the connection between Paris CDG and Malpensa, the route has welcomed a 45% increase in weekly seats this summer, with the airport pairing already served by easyJet (43 weekly flights). Along with CDG, Catania and Amsterdam (all highlighted in light green) have all welcomed an additional carrier in the past year, allowing all three to climb into the airport’s top four routes, with them joining Barcelona in third. In 2016 Barcelona was the #1 route from Malpensa. 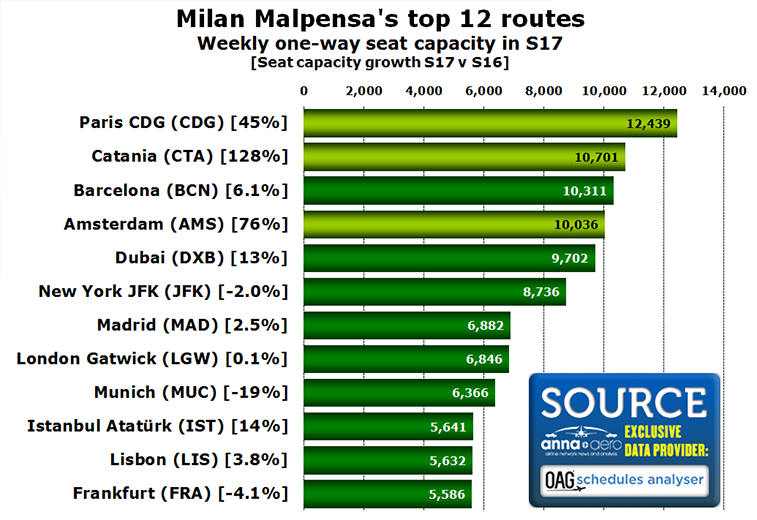 Currently this summer 152 non-stop destinations are served directly from Malpensa when referring to OAG schedules, with new routes recently launched including London Southend with Flybe and Moscow Domodedovo with Meridiana. While at Malpensa Ford was given a tour around the airport’s two terminals and airside areas by Arnaud Mimouni, Director of Operations, Milan Malpensa SEA. Among the highlights on the tour were the baggage systems of Terminal One, and the new cargo facilities to the south of the airport. 50% of cargo to Italy passes through Malpensa, and new operational centres are now being opened by FedEx and UPS at the airport. Another new feature to the airport are two de-icing pads which accommodate code F aircraft.