Would Alitalia be missed in Italy? Only has 9% of international seats this summer; easyJet, Ryanair and Vueling could take up domestic slack 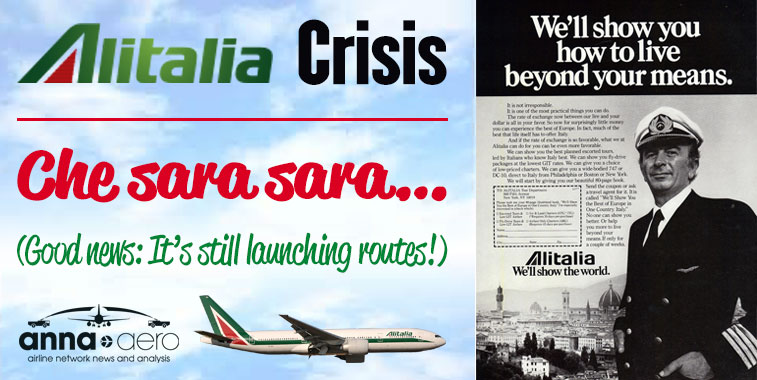 A lot of people will sadly lose their jobs if Alitalia eventually goes bust (although hopefully the fool who thought this advert was a good idea already lost theirs long ago). However, anna.aero believes that some other potential big losers – Milan Linate (LIN) and Rome Fiumicino (FCO) – are both massively attractive markets and would recover very rapidly.

When anna.aero was launched back in July 2007 our fourth lead story examined what the consequences of Alitalia’s possible demise might be. Since then the only major domestic rival, Air One, was absorbed by Alitalia before being shut down, while Windjet ceased operations in August 2012. Volare/Volareweb which also came under Alitalia’s control was eventually dissolved in early 2015. However, despite its precarious financial position, Alitalia continues to operate (and start new routes), despite having recently entered into special administration and relying on a bridging loan from the Italian government to keep it operating while it looks for new investors, or, as appears to be the wish of the staff who rejected the airline’s restructuring plans which were supported by the unions, the airline is renationalised. So this week anna.aero takes a closer look at the Italian market and Alitalia’s role focussing on schedule data for this summer.

Alitalia has 40% of domestic market, less than 10% of international market

Looking first at the domestic market, Alitalia’s share of Italian domestic flights is just under 45% with those flights also accounting for 40% of domestic seat capacity. Ryanair is second with 25% of flights and 31% of seats, with easyJet a distant third with around 8% of both. Meridiana and Volotea also both have more than 5% of the domestic market this summer.

However, looking at Alitalia’s top 15 domestic routes this summer, it has a monopoly on 10 of them and offers the most flights on the remaining five. This gives the carrier 84% of capacity across these 15 routes. Ryanair is the main competitor on the Rome routes to Catania and Palermo, with Vueling providing a third option for passengers on those routes. 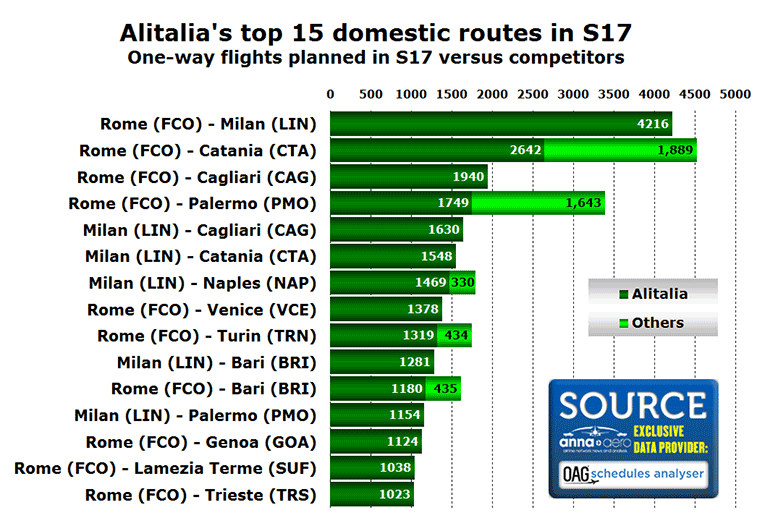 At least until the end of this summer, easyJet will be offering indirect competition on the Rome-Milan route with its service between Milan Malpensa and Rome Fiumicino, as well as flights between Milan Malpensa and Cagliari. Ryanair also provides further indirect competition from Milan to Bari, Catania and Palermo by offering service either from Milan Malpensa or Milan Bergamo. The ULCC also serves Rome Ciampino from Cagliari and Trieste. As a result, Alitalia’s biggest real monopoly route is the 410-kilometre between Rome and Venice. The only other two genuine monopoly routes are the 399-kilometre connection between Rome and Genoa and the 467-kilometre route from the Italian capital to Lamezia Terme.

Alitalia has less than 10% of Italian international market

In the more competitive international market, Alitalia’s share of seat capacity this summer is just 8.6%, lagging well behind Ryanair (19.9%) and easyJet (11.5%). This compares very badly with Europe’s other leading flag carriers in those countries with significant domestic markets. Lufthansa has almost 27% of international capacity from German airports this summer, which does not include the additional 10% share from Eurowings, its in-house LCC. Air France has 24% of international seat capacity from all French airports, while the figure for British Airways in the UK is just under 17%. In Spain, although Iberia has just 7.6% of international seats, Vueling (like Iberia part of IAG) has a further 8.5%. 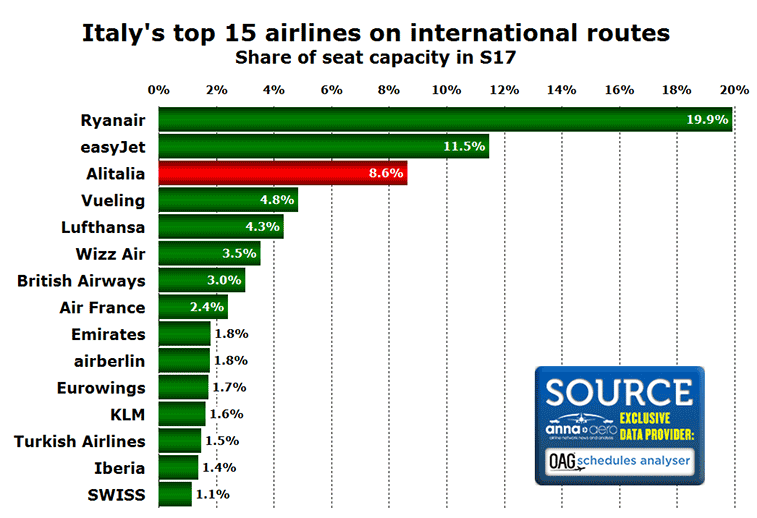 To see which airports would suffer the most from the complete collapse of Alitalia we have looked at the airline’s share of seat capacity this summer at Italy’s 15 busiest airports in 2016. At two airports, Milan Bergamo and Rome Ciampino, Alitalia is not present at all, while at a further five airports the flag carrier accounts for less than 10% of capacity. At a another five airports Alitalia has between 10% and 25% of seats, leaving just Cagliari (32%), Rome Fiumicino (39%) and Milan Linate (60%). 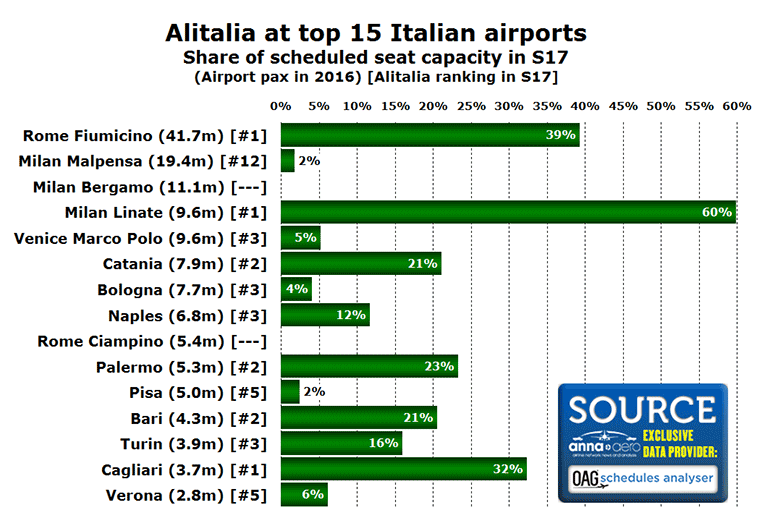 Given that Milan Linate has been artificially constrained for many years and is also the most convenient airport for downtown Milan, it is likely that other carriers would be more than happy to back-fill the majority of capacity lost by the collapse of Alitalia. Obviously Rome would take a big hit in the short term, but being the capital city airport and fantastic destination it seems likely that the airport could recover quite quickly in a similar way to what happened in Budapest when Malev collapsed. 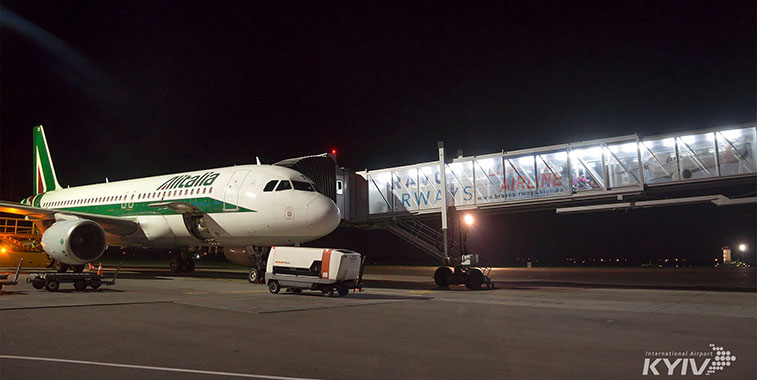 Despite the airline’s current woes Alitalia continues to launch new routes. On 1 May it began daily flights from Rome Fiumicino to Kiev Zhulyany in Ukraine operating during the night. Arriving in Kiev at 02:50 in the morning the flight departs back to the Italian capital at 05:00.