Luxembourg-Budapest is “Skyscanner Unserved Route of the Week” ‒ nearly 35,000 searches; Luxair’s next link after Alicante?? 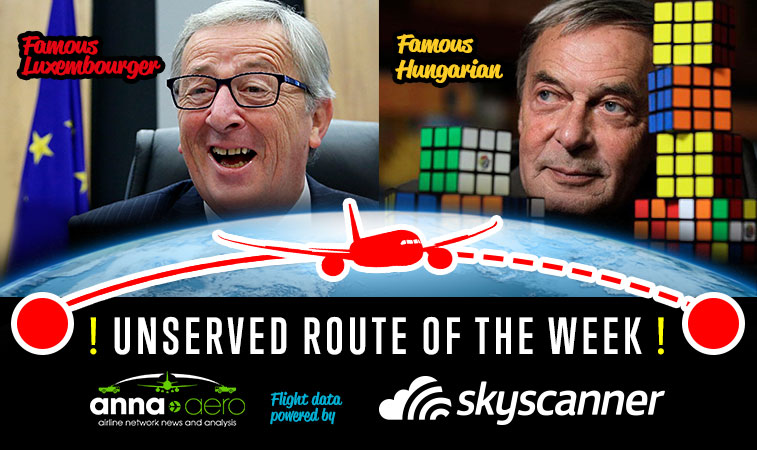 Jean-Claude Juncker, President of the European Commission: does any of his compatriots seriously challenge him as the most famous Luxembourger in history, ever? But will Juncker’s universal recognition outlive the endurance of Ernő Rubik’s equally enigmatic puzzle, or perhaps László Bíró, whose ball point pen makes it possible to issue an estimated million parking tickets in Europe every day.

With nearly 35,000 searches in the last year, a potential city pair from Luxembourg to Budapest has been identified as this week’s “Skyscanner-anna.aero Unserved Route of Week” – a powerful analysis based on aspirational data captured from the Skyscanner.net flight comparison site used by +60 million unique visitors per month. “Budapest is one of those very popular and trendy capital cities which is missing on our route map,” asserts Johan Vanneste CEO Luxembourg Airport. “I’m therefore not surprised that this route surfaced as the Unserved Route of the Week from Luxembourg Airport.” 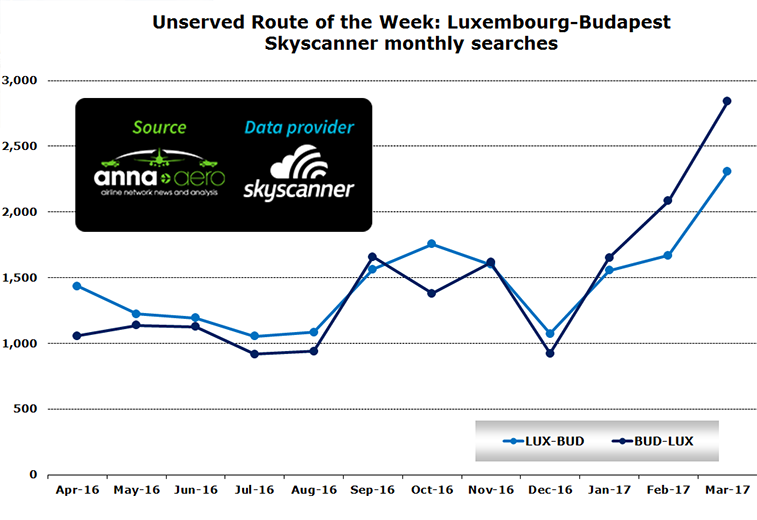 anna.aero would love Luxair or Wizz Air to serve this route

Skyscanner demand on this week’s unserved route shows a very slight bias towards the Luxembourg end of the city pair, with a near 50/50 split, so on this basis we looked at potential carriers at the Luxembourg end first. Unsurprisingly, Luxair is the biggest carrier at the airport, commanding 54% of weekly seats according to OAG data for the week commencing 9 May. The airline currently offers 54 non-stop services from Sydney, of which four are to destinations in Central or Eastern Europe – namely Bourgas, Varna, Prague and Dubrovnik. Services to the Czech capital, last served by the airline in 2012, were re-launched in March 2016, while flights to Dubrovnik, operated in conjunction with Zadar, were commenced in May 2016. So clearly the improving the network in region is on the flag carrier’s agenda, hopefully with this Skyscanner data now being made public, Budapest will be the next addition.

Luxembourg’s second largest carrier is Lufthansa, which holds a 8.6% share of weekly seats, as a result of its four times daily service to Frankfurt and 23 times weekly operation to Munich. The German flag carrier will not be an ideal solution for this route opportunity, so we look to the third largest airline at the airport, which is Ryanair (8.5% share), ahead of fellow LCC easyJet in fourth (5.6%). The Irish ULCC has a five destination portfolio at Luxembourg at the moment, with a daily service to London Stansted, five times weekly to Porto, and four times weekly to Lisbon, Madrid and Milan Bergamo. Budapest is currently Ryanair’s 37th largest operation, so there may well be other opportunities for further growth at Luxembourg that the carrier is considering before the Hungarian capital. By contrast, easyJet’s network from Luxembourg is slightly smaller with only four points presently flown, and all cities served by its nemesis, namely Milan Malpensa, London Gatwick, Lisbon and Porto. Unlike Ryanair, easyJet does not have Budapest base, so it should be accepted that the Irish carrier is more likely than it arch rival to consider this unserved opportunity at this time. 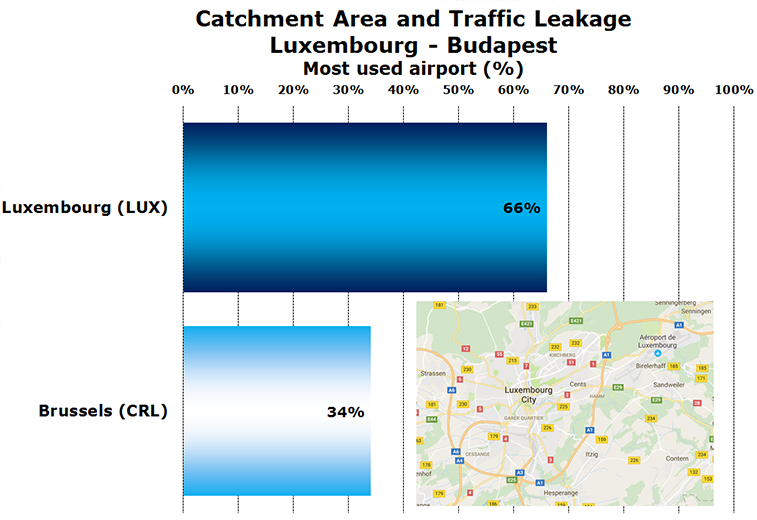 Faical Allou Skyscanner’s Business Development Manager says: “Luxembourg serves 66% of the traffic from the catchment (100km around the airport) going to Budapest. With better service, such as a non-stop operation, the traffic could grow up to 51%.”

Contemplating the Hungarian end of the route, the potential carriers at Budapest were considered next. The airport’s capacity is led by a ULCC, with Wizz Air holding around 29% of weekly seats, more than double the size of the #2 carrier, Ryanair. While its current 52 routes from the airport are widespread across the whole Europe, the Middle East and North Africa from the airline’s home hub and second biggest operation (London Luton is bigger in terms of weekly seats), Wizz Air does not currently offer any sectors into Luxembourg. However, with LCCs starting to become more prominent in this previously more LCC-reluctant market, now might be the time for Wizz Air to consider staking a claim from its stronghold in Central and Eastern Europe to Luxembourg before the opportunity is missed.

When looking at the previous year of search data, the busiest month for potential traffic flows (for both directions on the route combined) is March 2017, with over 5,000 searches, over 3,000 higher than the lowest monthly figure, which was recorded in July 2016 (2,000 searches). The seasonality profile of this search data is more extreme than the last Unserved Route of the Week (Sydney to Osaka)  with the low-month traffic representing 38% of the highest month. According to OAG Traffic Analyser, because there is no direct service, the top three connecting options chosen by those passengers who did book travel between Luxembourg and Budapest in the past year indicates that the majority of connecting travellers used Munich (25%), Amsterdam (22%) and Frankfurt (19%). In total, 14 different airports were used by travellers to get between the two cities.

Indeed, an O&D that is not served by a non-stop flight will typically display a low purchase rate and low traffic. In this instance Skyscanner’s Travel Insight indicates a monthly average of 6.7% for the Luxembourg to Budapest route (see graph below). Therefore, if there was a Luxembourg to Budapest route, and if bookings performed in line with the “Skyscanner market average” for direct services at both airports (7.0%), the airline operating this route could immediately expect an improved purchase rate of 4.3%, without any increased marketing spend. However, with over 35,000 annual searches at least a twice-weekly service should be immediately viable for the airline selecting to start this potential city pair. “We always felt that a number of direct connections to major cities in Eastern Europe were lacking in our route network. Last year Luxembourg was lucky to add two new Eastern European capitals to its portfolio: Warsaw with LOT Polish Airlines and Prague with Luxair. We would love for Budapest to be next,” concludes Vanneste. 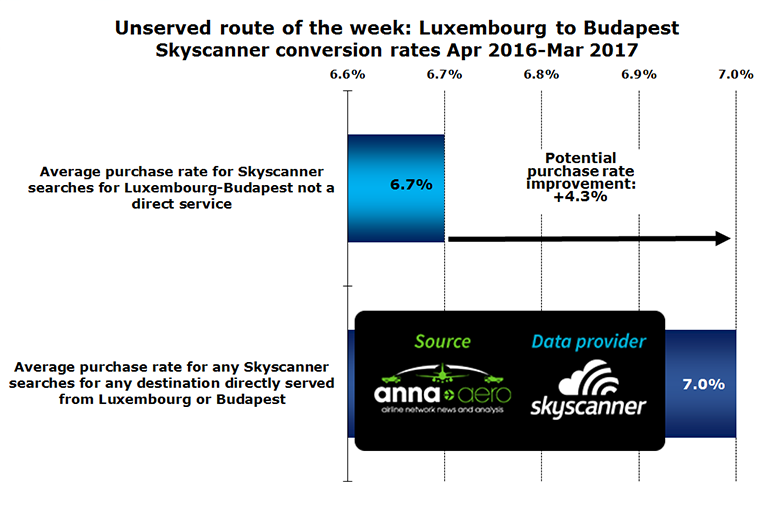