anna.aero joins Nuremberg Airport and bmi regional as both celebrate the start of the carrier’s new connection from Birmingham 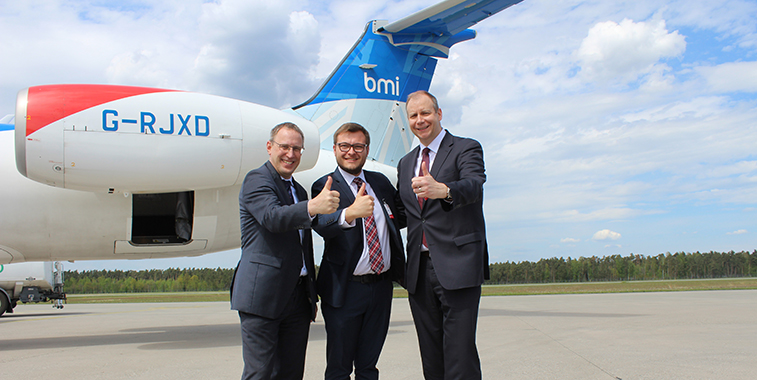 On 11 May Nuremberg Airport celebrated the arrival of its newest carrier – bmi regional – with it beginning a six times weekly connection from Birmingham. Seen celebrating the new route at the German airport are: Dr. Michael Hupe, CEO Nuremberg Airport; Jonathan Ford, Assistant Editor of anna.aero; and Jochen Schnadt, CCO of bmi regional.

On 11 May, anna.aero flew to Nuremberg to join the airport as it celebrated the arrival of its newest carrier, bmi regional, as it began a new six times weekly connection from Birmingham. The route, which officially began on 8 May, will be flown on the regional airline’s fleet of ERJ 145s.

Along with Nuremberg, bmi regional has opened new services from Birmingham this year to Gothenburg (six times weekly) and Graz (four times weekly; twice-daily on Mondays and Fridays). As a result of the carrier’s investment in Birmingham, it will add over 27,000 one-way seats this year from the city. For the UK airport, Nuremberg is its eighth scheduled destination in Germany after Berlin Tegel, Düsseldorf, Frankfurt, Hannover, Hamburg, Munich and Stuttgart. For Nuremberg, Birmingham becomes its third connection in the UK, with Ryanair offering twice-daily flights to London Stansted and a daily service to Manchester.

The rationale behind bmi regional’s decision to open a direct link between Birmingham and Nuremberg is due to the automotive industry connections between the two cities. Speaking briefly to anna.aero in Nuremberg, Jochen Schnadt, CCO of bmi regional, said of the new route: “This service is all about connecting the key manufacturing hubs of the Midlands in the UK and the Bavarian region surrounding Nuremberg. The two regions are closely connected through their manufacturing prowess, especially in the automotive sector.”

anna.aero’s Assistant Editor Jonathan Ford was kindly invited to attend the celebratory flight of bmi regional’s new connection between Birmingham and Nuremberg by the German airport’s Head of Aviation Marketing & Business Development Christian Käser at Routes Europe in Belfast a few weeks prior to the launch. Of course Ford kindly accepted the invitation and was soon on his way to Nuremberg for the second time in six months, having previously visited the airport when Ryanair opened a base their in October for the start of W16/17. Time to board in Birmingham. Flight BM 1423 to Nuremberg boarded on time at 10:55 on 11 May, 30 minutes prior to the scheduled departure time. Alongside Ford, and many business travelers on their way to Nuremberg, several people on the Thursday flight were going to the historical German city for a long weekend break, making the most of the airline’s new connection. Once all passengers were on the aircraft, (registered G-RJXD for those interested), it was time to taxi out for departure, with the runway at Birmingham for the day’s departure being Runway 15. However, while the flight had boarded on time, it was delayed for a couple of moments to allow for Icelandair’s flight from Reykjavik/Keflavik to arrive. Another flight delayed by the Icelandic arrival was Blue Air’s service to Larnaca, a route which commenced at the start of S17. Once clear, BM 1423 was soon on its way, with a great view of Birmingham Airport on departure. After a comfortable flight of 01:30, it was time to land in Nuremberg. After touchdown, the baptising of the route took place, with the German airport’s firefighters producing a splendid water arch salute to welcome its newest carrier. 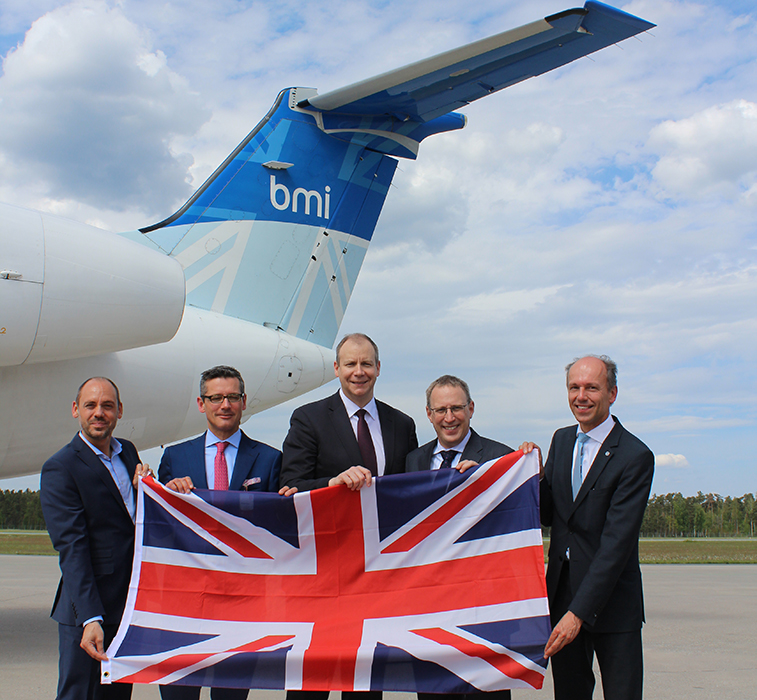 bmi regional’s new automotive connection! To toast the start of the route, a cake was commissioned by Nuremberg Airport. The cake is a car tyre, showing the automotive connection between the cities of Nuremberg and Birmingham. The cake, layered in cream, sponge and marzipan (the best in Germany anna.aero was told by bmi regional’s CCO) was indeed delicious. Seen cutting the cake are Hupe, Schnadt and Fraas. 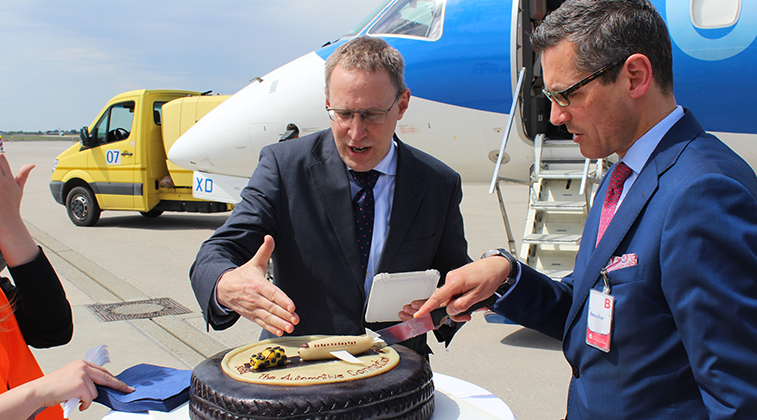 Of course one of the key roles of being an airport CEO is knowing how to perfectly cut the route launch cake, as it is important that everyone gets a fair amount of the route launch showstopper. Here we see Hupe giving Fraas a masterclass in cake cutting. 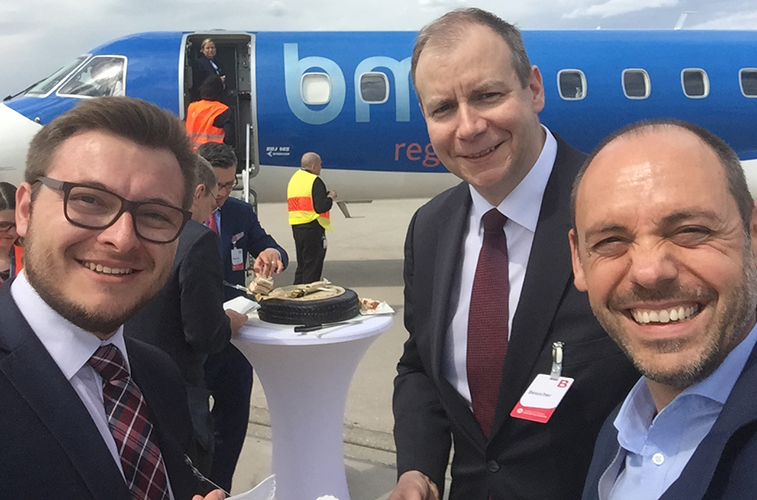 Time for a selfie! Once all the official cake photos had been taken and it had been cut and shared around, it was then time to enjoy some of the calorific wonder. Seen posing for a selfie mid-eating (forks visible at the bottom of the image) are Ford, Schnadt and Käser. Ford would like to thank Käser for allowing him to be part of celebration of bmi regional’s new route from Birmingham, and for bmi regional for arranging his flight to Nuremberg. From anna.aero, we wish both parties all the best for their new venture.