Bilbao-Athens is “Skyscanner Unserved Route of the Week” ‒ over 110,000 searches; Vueling’s next Basque boost?? 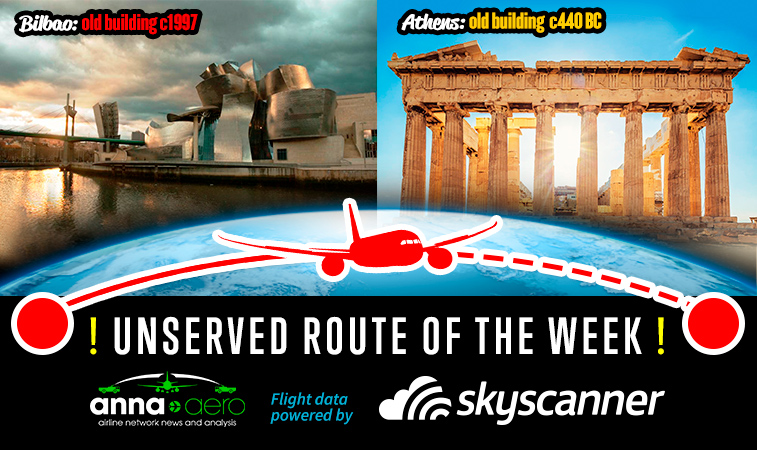 When the Guggenheim Museum Bilbao opened in 1997, it was immediately hailed as one of the world’s most spectacular buildings; the same was sure to have been said nearly 2,500 years earlier in Athens, when the equally-revered Parthenon was completed in 438 BC. Over 110,000 travellers, including possibly lovers of Greek and contemporary architecture, have searched for a flight between the two cities in the last year.

With over 110,000 searches in the last 12 months, a potential city pair from Bilbao to Athens has been identified as this week’s “Skyscanner-anna.aero Unserved Route of Week” – a powerful analysis based on aspirational data captured from the Skyscanner.net flight comparison site used by +60 million unique visitors per month. The Spanish airport will be the host of next year’s Routes Europe conference between 22-24 April. 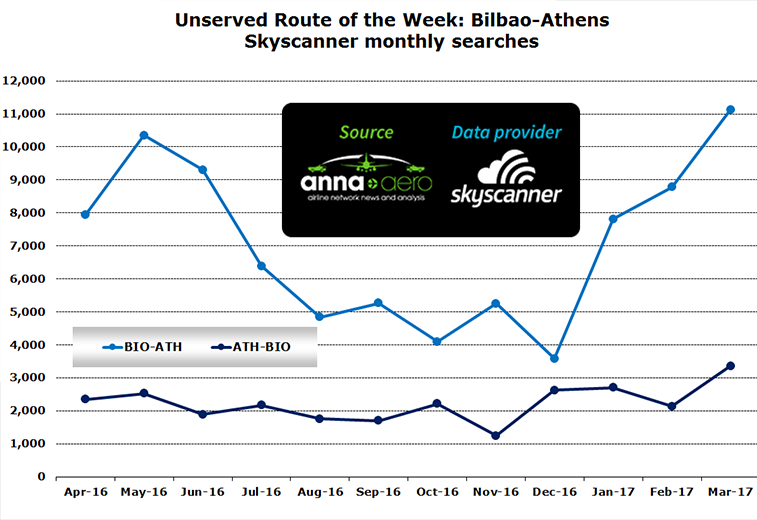 anna.aero advises Vueling or Aegean to add this route

Skyscanner demand on this week’s unserved route shows a significant bias towards the Bilbao end of the city pair, with a 76/24 split, so on this basis we looked at potential carriers at the Spanish end first. Vueling is the biggest carrier at the airport, commanding 36% of weekly seats according to OAG data for the week commencing 15 May. The airline currently offers 18 non-stop services from Bilbao, of which only six are to international destinations – namely London Gatwick, Amsterdam, Berlin Tegel, Rome Fiumicino, Milan Malpensa and Paris Orly – with the remainder being domestic sectors. With many European capitals already on the LCC’s network from Bilbao, it may indeed not be long before Athens is given some consideration, particularly as the market is not unfamiliar to the airline, as it serves the Greek capital with a daily service from its biggest base at Barcelona. However, as Vueling has not added a new route from Bilbao in the last 12 months, and none are expected from the LCC for the remainder of 2017, the airline’s new route growth seems to have plateaued of late, so hopefully with this Skyscanner data now being made public, Athens will be its next addition.

Bilbao’s second largest carrier is Iberia, which holds a 14% share of weekly seats, as a result of its five domestic sectors to Madrid, Santiago de Compostela, Valencia, Alicante and Vigo. On this evidence, the Spanish flag carrier will not be an ideal solution for this route opportunity (despite it flying five times weekly to Athens from Madrid), so instead we look to the third largest airline at the airport, which is Lufthansa (10% share), ahead of fellow Air Europa in fourth (8.0%). The German national airline is again a non-starter, while Air Europa, like its homeland rival, currently has a limited and wholly domestic network from Bilbao, with a near-four times daily operation to the capital, along with four weekly flights to Palma de Mallorca and Tenerife North, as well as a twice-weekly service to Lanzarote. So it would seem that this unserved route opportunity is presently in the hands of Vueling alone at the Spanish end of the potential city pair. 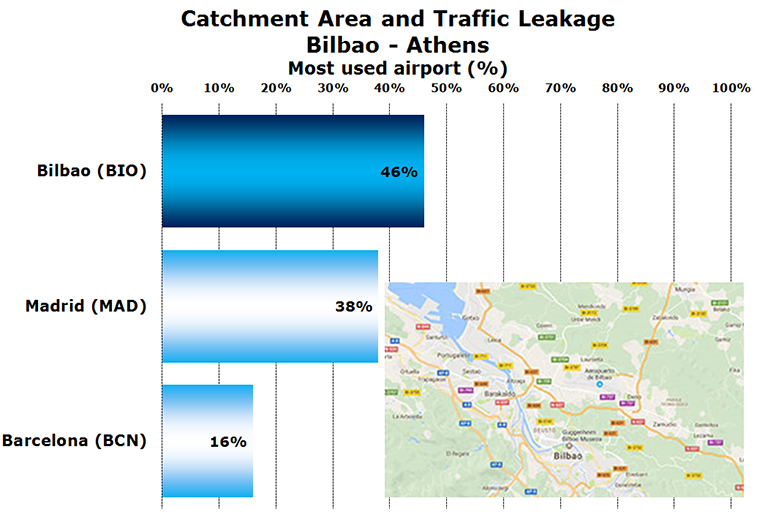 Faical Allou Skyscanner’s Business Development Manager says: “Bilbao serves 46% of the traffic from the catchment (100km around the airport) going to Athens. With better service, such as a non-stop operation, the traffic could grow by up to 120%.” Note: given the sample size the confidence interval for the share of Bilbao is +/-3%.

Considering the Greek end of the route, the potential carriers at Athens were contemplated next. The airport’s capacity is led by Olympic Air, which holds around 25% of weekly seats, slightly larger than the #2 carrier, and its partner, Aegean Airlines (23%). The former’s current 27-airport route network is all domestic, with the latter undertaking the majority of Greek-based international flights from the airport. Aegean presently operates to 59 predominantly European destinations, as well as several points in the Middle East and North Africa from Athens. It also has experience in the Spanish market from its biggest hub, offering eight weekly flights to Madrid and a daily service to Barcelona. With 18 destinations being flown from the Greek capital, ULCC Ryanair is next in the airport’s capacity pecking order, but currently with no Spanish destinations in operation from Athens, or indeed any routes from Bilbao. Bearing these factors in mind, the most likely carrier on this potential city pair from the Greek end will therefore be Aegean, unless of course Vueling beats them to it.

When looking at the previous year of search data, the busiest month for potential traffic flows (for both directions on the route combined) is March 2017, with nearly 14,500 searches, over 8,000 higher than the lowest monthly figure, which was recorded in December 2016 (6,200 searches). The seasonality profile of this search data is less extreme than the last Unserved Route of the Week (Luxembourg to Budapest) with the low-month traffic representing 43% of the highest month. According to OAG Traffic Analyser, because there is no direct service, the top three connecting options chosen by those passengers who did book travel between Bilbao and Athens in the last 12 months indicates that the majority of connecting travellers used Amsterdam (24%), Munich (16.4%) and Madrid (16%). When looking at the options used by transfer travellers originating in Athens, Munich is now dominant (28%) from Amsterdam (18%) in second, but with Istanbul Atatürk now in third spot (14%).

Indeed, an O&D that is not served by a non-stop flight will typically display a low purchase rate and low traffic. In this instance Skyscanner’s Travel Insight indicates a monthly average of 6.3% for the Bilbao to Athens route (see graph below). Therefore, if there was a Bilbao to Athens route, and if bookings performed in line with the “Skyscanner market average” for direct services at both airports (8.3%), the airline operating this route could immediately expect an improved purchase rate of 33%, without any increased marketing spend. However, with over 110,000 annual searches in the past year, at least a three or four times weekly service should be immediately viable for the airline selecting to start this potential city pair. 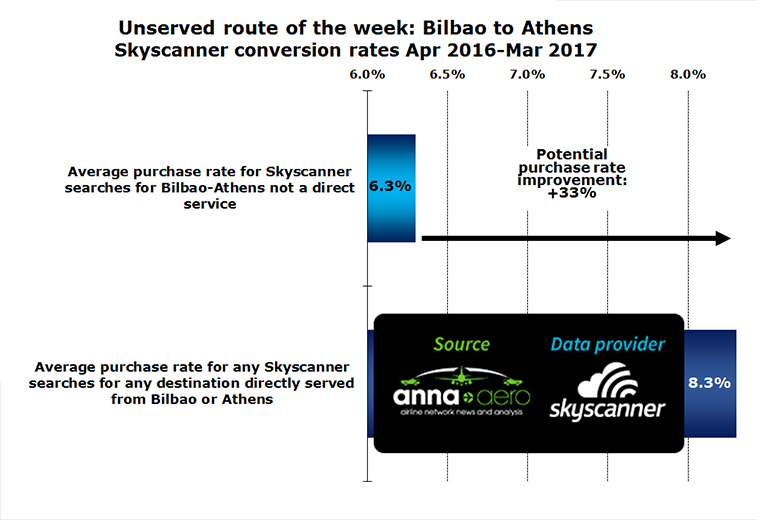