Bristol Airport celebrates the return of British Airways and four new European routes – anna.aero joins in on the celebrations 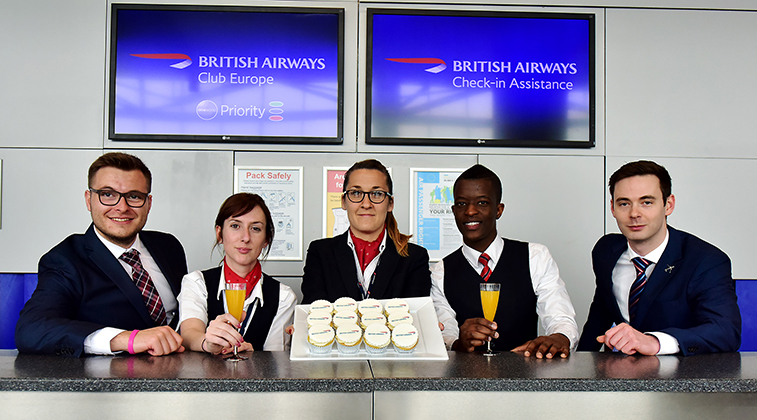 Welcome back to Bristol British Airways! On 20 May British Airways returned to Bristol Airport with flights from Florence, Ibiza, Malaga and Palma de Mallorca. Seen celebrating the new routes with BA-branded cupcakes and Bellini along with Swissport staff, the handling agent for BA flights from Bristol, are Jonathan Ford, Assistant Editor of anna.aero and Pete Downes, Head of Aviation Development at Bristol Airport.

Saturday 20 May was an exciting day in the history of Bristol Airport as it welcomed the return of British Airways, an airline which has not served the UK airport since 2007, after Flybe acquired BA Connect. The oneworld member this summer is operating four routes from Florence, Ibiza, Malaga and Palma de Mallorca to the airport, with all of them being flown weekly on London City based E170s and E190s. It should be noted that the carrier has also opened the same four routes this weekend from Birmingham, with the aircraft stopping in Europe overnight and operating w-patterns into the UK on weekends i.e Malaga–Bristol–Malaga–Birmingham–Malaga. The most significant of BA’s new routes to Bristol is Florence, as this is a sector that is not served by any other carrier from the UK airport. With this launch, Bristol is now connected to nine destinations in mainland Italy, along with flights to Olbia in Sardinia and Catania in Sicily. With the additional flights to Ibiza, Malaga and Palma de Mallorca with BA, Bristol this summer will be offering passengers a choice of over 165 weekly flights to Spain.

This year has got off to a flying start for Bristol, with it having welcomed over 1.5 million passengers during Q1 2017, an increase of nearly 13% when compared to the same period of 2016. Among the highlights so far this year, along with the return of BA, is the restoration of long-haul services with Thomson Airways. On 6 May it re-started flights to Cancún and Orlando Sanford, routes that the carrier had not flown since the end of S13. These flights with Thomson Airways also marked the start of 787-8 flights from the airport, with the carrier having last flown these routes to the US and Mexico from Bristol on 767-300s according to OAG schedules. Along with Thomson Airways, Thomas Cook Airlines has added flights to Almeria from Bristol, while easyJet has begun services to Kefalonia.

All of this success comes in a year where Bristol Airport turns 60. The airport welcomed its first flight in May 1957, and now it has grown to accommodate over 7.6 million passengers a year. Robert Sinclair, CEO at Bristol Airport, said of the airport’s milestone: “Looking back over our 60-year history is a reminder of how far we have come from the days when flying was a special experience for a small number of people. Air travel today has made new sights, experiences and opportunities accessible to millions, but it is important we in the Southwest do not take our international connectivity for granted.”

A few weeks ago at Routes Europe in Belfast, Pete Downes, Head of Aviation Development, Bristol Airport invited anna.aero’s Assistant Editor Jonathan Ford down to the UK’s West Country to celebrate the return of British Airways. Of course Ford accepted the invitation, and was soon tottering down the M4 to Bristol to celebrate the carrier’s arrival. Of course no route launch is complete without a piece of sweet sponge, and Bristol Airport chose British Airways-branded cupcakes as their sweet treat selection to celebrate the arrival of the UK flag carrier. Seen having their picture taken with the mini baked gems are the airport’s: Becky Eastwood, Marketing Communications Executive; Shirley McColl, Business Development Executive; and Pete Downes, Head of Aviation Development. 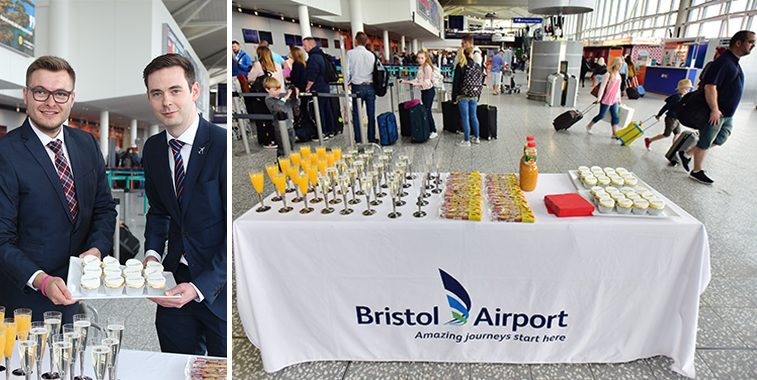 On hand to hand out cupcakes to passengers were Jonathan Ford of anna.aero and Pete Downes of Bristol Airprort. Along with cupcakes, passengers were treated to Bellini, Prosecco and Biscotti as they checked in for the first flight to Florence. Touchdown, the inaugural flight from Florence touched down at Bristol at 12:13, some 12 minutes ahead of schedule. Once the aircraft had landed, it taxied and parked on Stand 2, and soon after the first passengers from Florence disembarked. While the turnaround began, the passengers on the first flight made their way to Gate 25 for BA 7017, the flight number given for the outbound service to Florence. Once the passengers had disembarked it was time for the official photo to be taken on the apron. It was a very windy and rainy day at Bristol, but that did not dampen (no pun intended) spirits. Posing with the promotional banner for the new routes along with the crew are Luke Hayhoe, GM Customer and Commercial, BA CityFyer, and Pete Downes, Head of Aviation, Bristol Airport. BA will operate all four routes weekly (Saturdays) throughout summer. 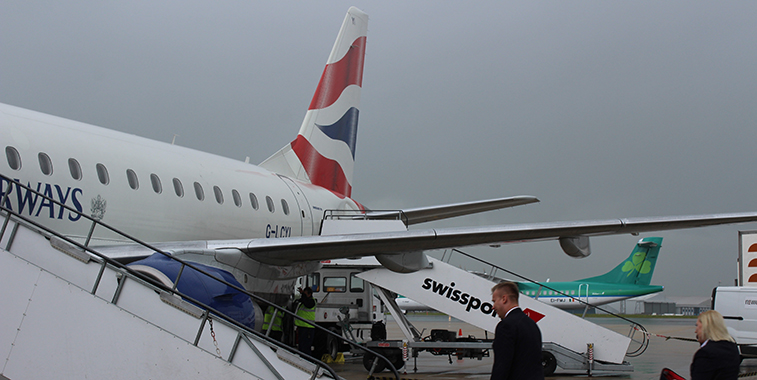 As the crew dashed back onto the aircraft after the photo shoot on the apron, Ford noticed an Aer Lingus ATR 72-500 taxing by for departure to Dublin, the only other IAG-owned carrier that operates into Bristol. Aer Lingus operates 23 weekly flights between Bristol and Dublin, offering passengers good connections onto its North American network. 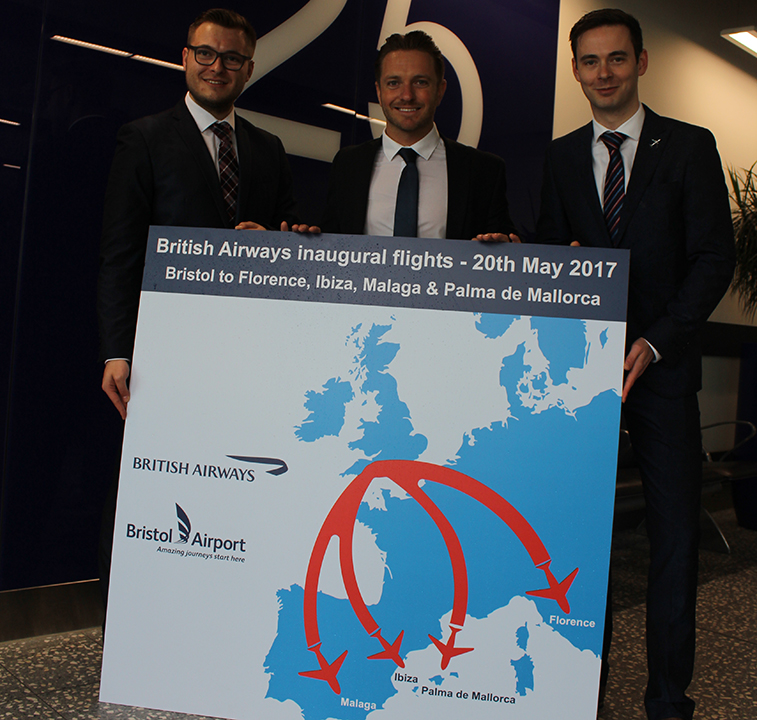 Once back in the confines of a warm and dry terminal, Ford joined Hayhoe and Downes for a further photo to promote BA’s new routes. Along with opening flights from Bristol to Florence, Ibiza, Malaga and Palma de Mallorca, the carrier has also opened up the same routes from Birmingham, with all flights being operated on London City based E170s and E190s. 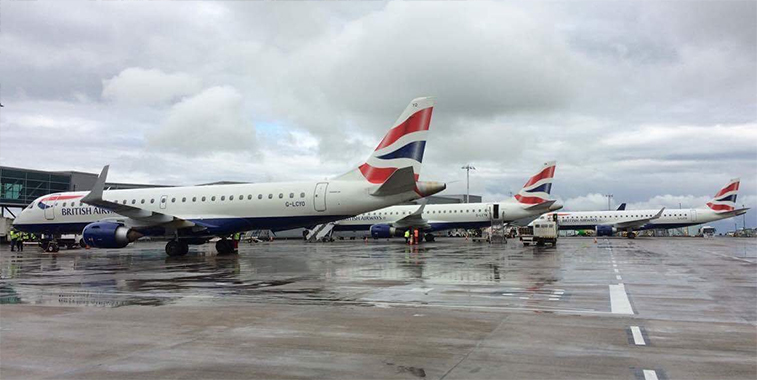 Just like buses…no BA tailfins for years…then three turn up at once! After the Florence flight had departed, the rest of the first flights from Ibiza, Malaga and Palma de Mallorca arrived within moments of each other, with them all seen here on stand at Bristol. anna.aero would like to thank Bristol Airport, in particular Pete Downes, for allowing us to be part of one of the airport’s most historic events in recent years.