UK-Spain market saw biggest growth in over 20 years in 2016; S17 seats up 11% as Jet2.com drives growth with Stansted and Birmingham bases 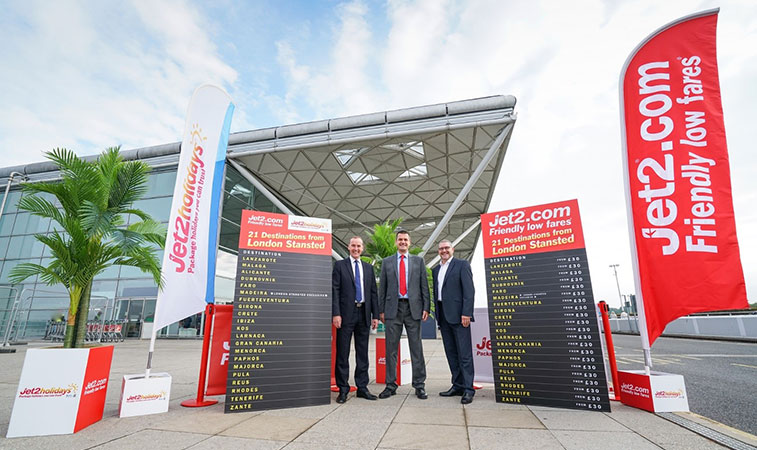 Jet2.com is the main driver of growth in the UK-Spain market this summer. With new bases at London Stansted and Birmingham, the leisure carrier is responsible for almost half of the additional capacity in the market this summer. After record growth of 15.7% (to over 41 million passengers) in 2016, this summer’s capacity growth is a slightly more modest, but still impressive, 11%.

Last year saw over 41 million passengers travelling on flights between the UK and Spain. This was an increase of 15.7% on the 2015 figure of 35.7 million, and the fastest growth in the market in over 20 years. Safety and security concerns in other traditional leisure destinations such as Egypt and Turkey worked in Spain’s favour as airlines and tour operators redirected capacity to this more established market. 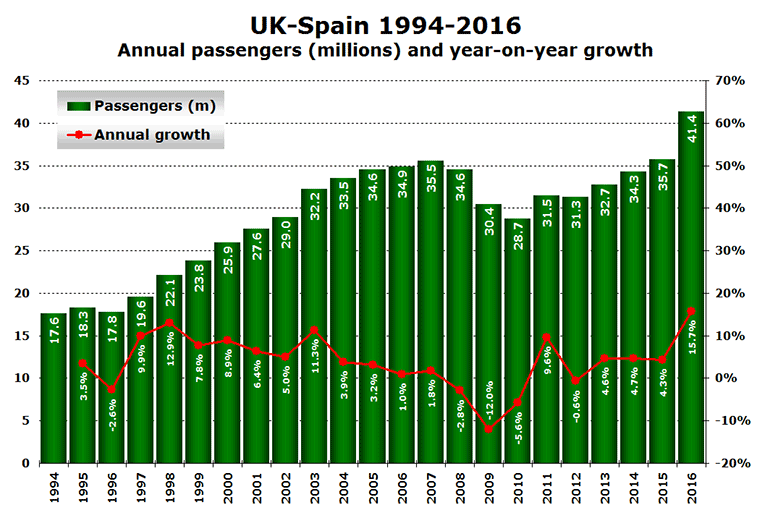 Of the UK’s top 15 airports for Spanish routes, 10 saw double-digit growth. Five airports recorded growth of more than 20% led by Birmingham (+34%), Edinburgh (+31%) and Newcastle (+29%). In volume terms Manchester’s growth of 25% represented an additional 1.1 million passengers just on routes to and from Spain. Four London airports (shown in bright green) ranked in the top eight, with Luton (+24%) recording the highest growth. 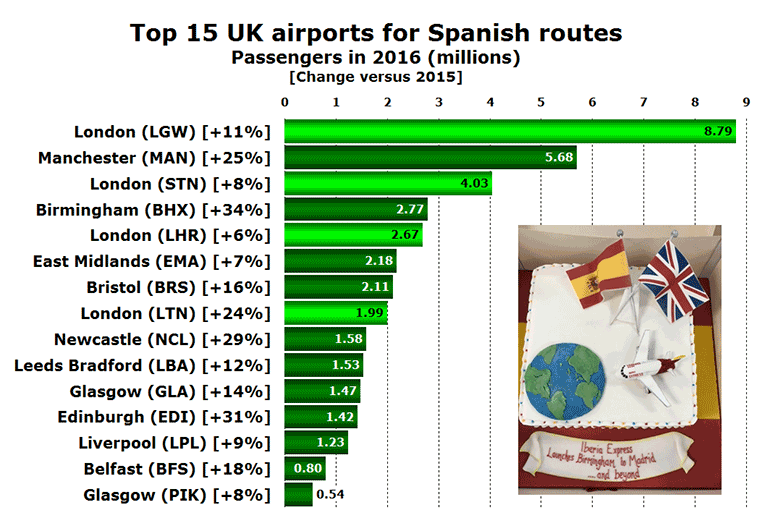 Airports outside the top 15 that also recorded impressive growth include Belfast City (+64%), Doncaster Sheffield (+36%) and Cardiff (+23%). London’s share of the UK-Spain market (which also includes London City and London Southend airports) fell in 2016 by two percentage points from 45.8% to 43.8%. What this highlights is that UK-Spain traffic from outside of the London area grew by almost 20% last year.

Malaga, Palma and Alicante battle for #1 status from UK 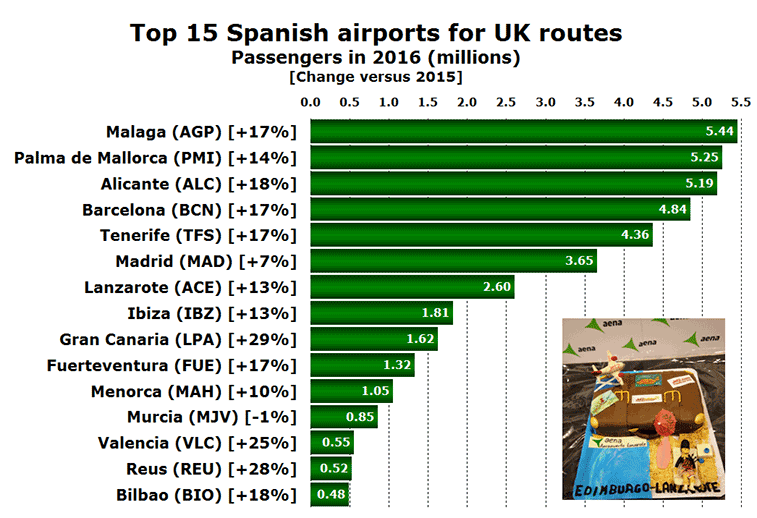 Outside the top 15 there was impressive growth at Almeria (+62%) and Asturias (+60%) while Castellon saw traffic increase from just under 20,000 passengers in 2015 to almost 73,000 in 2016 thanks to Ryanair’s services from Bristol and London Stansted.

Jet2.com accounts for almost half of all UK-Spain capacity growth in S17

Looking at schedule data for this summer, the increase in UK-Spain seat capacity is around 11%, with an additional 1.9 million one-way seats from UK airports. Although Ryanair and easyJet remain the top two airlines, Jet2.com has overtaken Thomson Airways to become the third biggest carrier. Having opened bases this summer at Birmingham and London Stansted, the leisure carrier has added almost 900,000 one-way seats, accounting for 47% of the growth this summer. 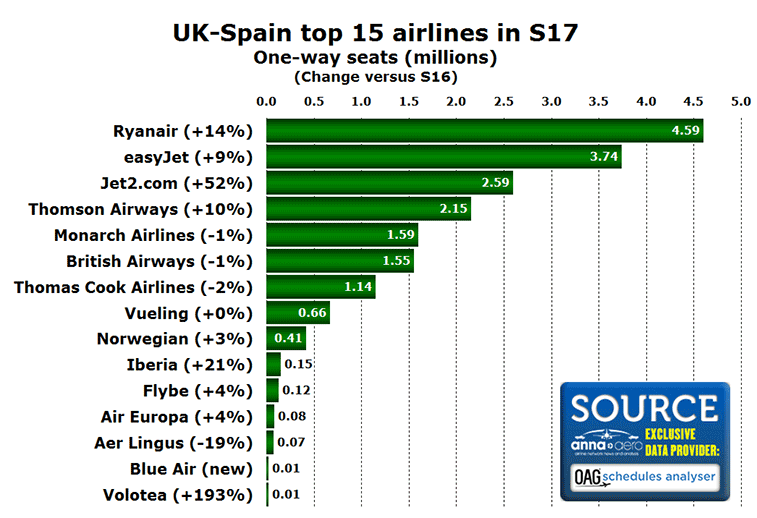 Ryanair has added around 550,000 one-way seats, easyJet 315,000 and Thomson Airways just under 200,000 according to OAG data. Blue Air is the only additional carrier in the market this summer having launched three times weekly flights from its new base in Liverpool to Alicante, a route already served by Ryanair (10 weekly flights) and easyJet (seven weekly flights). 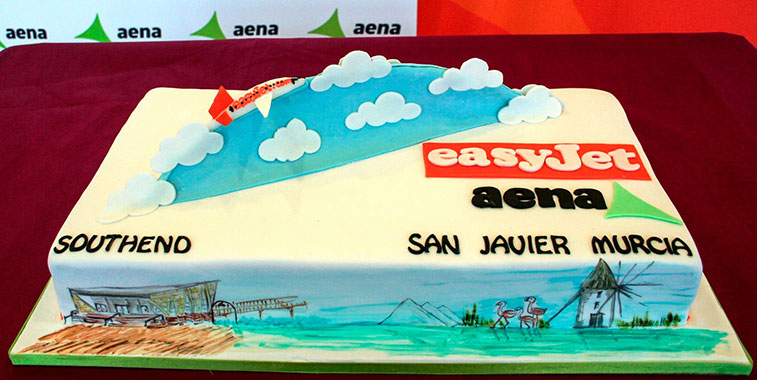 On 27 April 2017 easyJet began a new twice-weekly service between London Southend and Murcia. In 2016 Murcia was the only one of Spain’s top 15 airports for UK traffic to see a decline in passengers (of just 1%) while overall traffic between the two countries was up almost 16%. However, with new routes from London Heathrow (with British Airways) and easyJet the airport will hope to register growth on UK services in 2017.