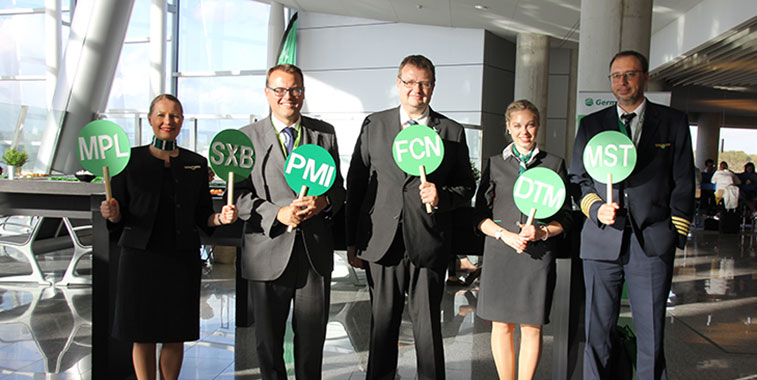 Germania opened a base in Palma de Mallorca this week, and used the opportunity to start three new routes – Dortmund, Maastricht and Strasbourg. “Palma de Mallorca is Germania’s largest departure airport. With 73 flights per week, our aircraft take off and land here more frequently than at any other airport in our network,” says Claus Altenburg (centre, holding FCN), Germania’s Director Sales Development Routes and Systems. Those carrying out the ribbon cutting to mark the start of Germania’s Rostock to Zurich operation were: Claus Altenburg, Director Sales Development Routes and Systems, Germania; Sylvia Bretschneider, President of the Landtag of Mecklenburg-Vorpommern; Dörthe Hausmann, MD Rostock Airport; Roland Methling, Mayor of Hansestadt Rostock; along with the Germania crew.
Tweet