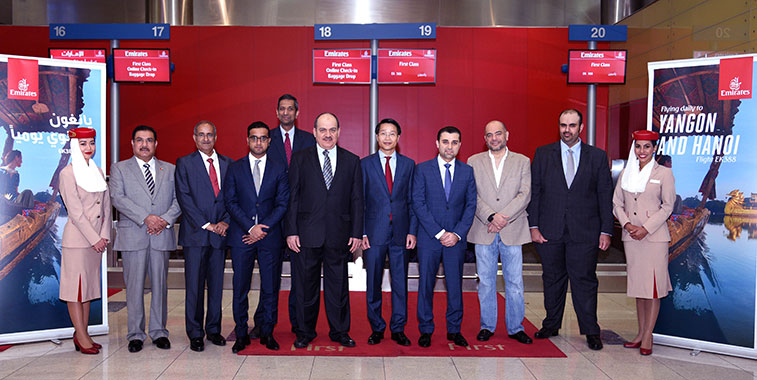 You know you’re doing something right when Emirates starts flying to your country. Myanmar’s main airport at Yangon welcomed the start of daily Emirates services last August. Fellow MEB3 carrier Qatar Airways has been serving the country since October 2012.

Myanmar is a rapidly evolving country. This is reflected in the growth of air services to, from and within the nation. According to OAG Schedule Analyser data, seat capacity at the country’s airports has more than doubled in just two years, from 2014 to 2016. Myanmar’s international gateway, Yangon International Airport, has accounted for roughly half of all scheduled seat capacity in the country for most of the last decade. anna.aero estimates that the airport handled around six million passengers last year. 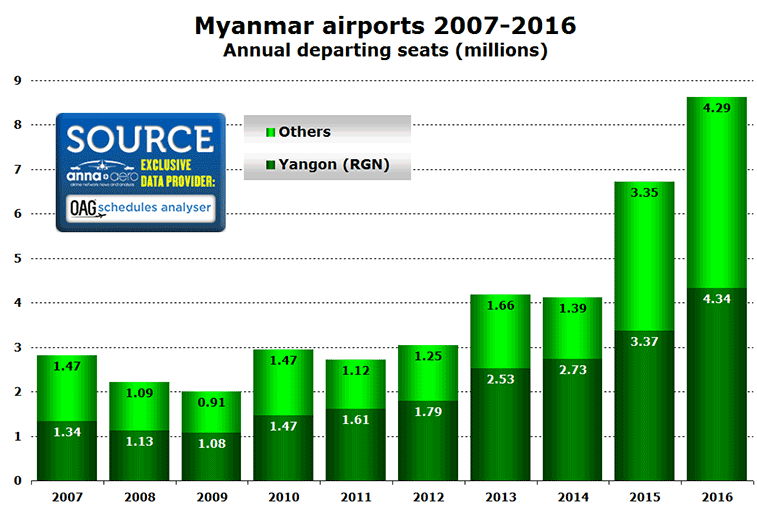 27 airports with scheduled services in Myanmar in S17

According to OAG data Myanmar has 27 airports with scheduled services this summer. Yangon is by far the busiest airport ahead of Mandalay and Heho. While Yangon is the biggest city in the country, the capital has been at Nay Pyi Taw since 2005. The airport serving the capital is currently only the country’s fifth busiest and its only international services are to Bangkok and Kunming. Apart from Yangon and Nay Pyi Taw the only other airport offering international flights is Mandalay. 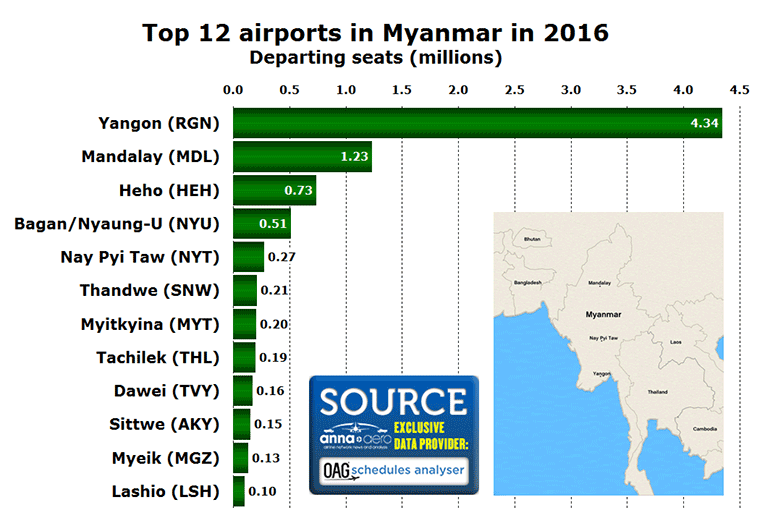 Nine of top 15 airlines are based in Myanmar

Analysis of OAG schedule data for this summer indicates that of the country’s top 15 airlines (by seats) nine are based locally. Going forward it seems unlikely that the country can sustain as many as nine local airlines. but while Myanmar is developing rapidly there are clearly opportunities. Myanmar National Airlines, the biggest domestic carrier, is the state-owned designated flag carrier and currently operates a fleet of 17 aircraft; 11 ATR 72s, two E190s and four 737-800s. 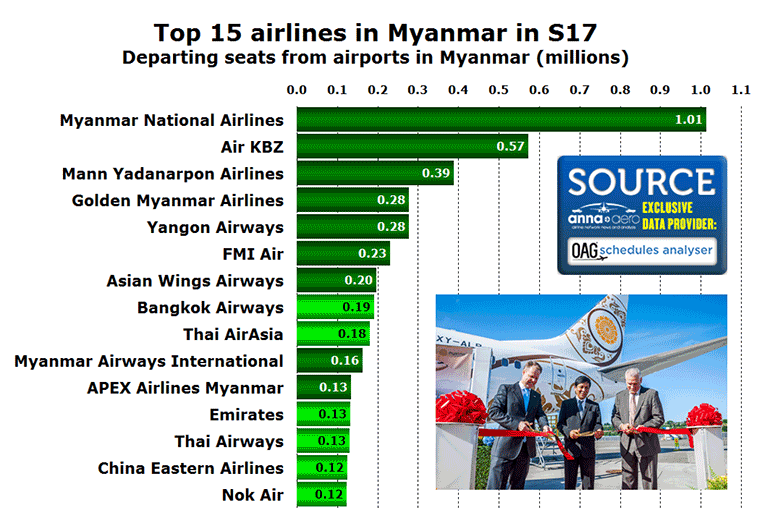 Of the six foreign carriers in the top 15 (highlighted in bright green), four are based in neighbouring Thailand while the remaining two are China Eastern Airlines and Emirates. The Dubai-based carrier began daily non-stop flights last August with an onward connection to Hanoi in Vietnam. From 1 July this will change as Hanoi will get its own non-stop service. The Yangon route will then continue on to Phnom Penh in Cambodia.

Bangkok is top international connection – and second as well

The country’s domestic air travel network is dominated by flights from Yangon to the other airports, with Mandalay and Heho being served regularly with at least 10 daily flights. There are at least seven daily departures between Mandalay and Heho. Domestic services vary in length from 97 kilometres to 951 kilometres (between Myitkyina and Yangon).

Regarding international services the country’s two leading international destination airports both serve the same city, Bangkok in Thailand. Bangkok Suvarnabhumi is served with over 90 weekly flights from airports in Myanmar, while Bangkok Don Mueang welcomes 63 weekly flights, holding off Singapore which has 57 for second place. A total of 14 destinations are served with at least daily flights from Myanmar, with the remaining 11 international airports being located across Cambodia, China, Hong Kong, Japan, Malaysia, South Korea, Thailand, the UAE and Vietnam. 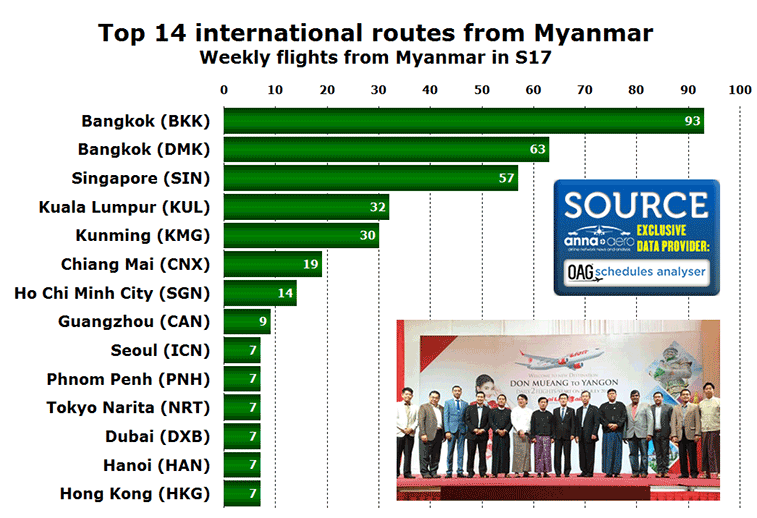 Looking ahead, with Emirates shifting its Hanoi connection to Phnom Penh from 1 July, VietJetAir is seizing the opportunity to enter the Hanoi to Yangon market, which is already served by Vietnam Airlines. The LCC has announced plans to launch daily flights from 31 August. It already serves Yangon from Ho Chi Minh City. 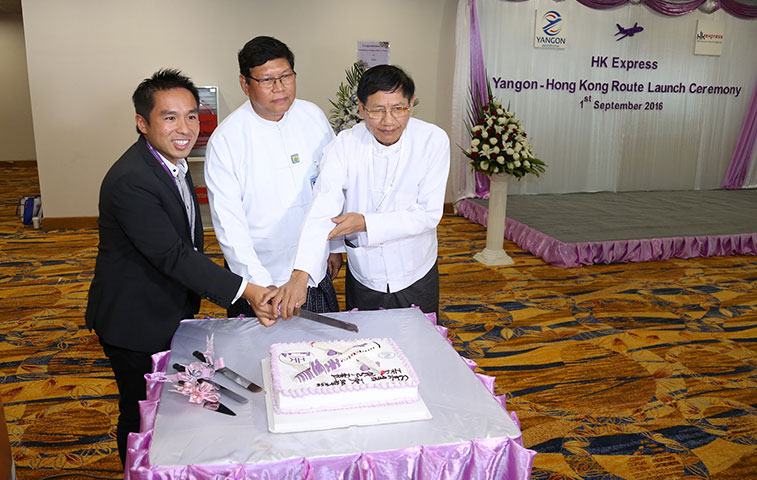 Last September HK Express began twice-weekly flights between Hong Kong and Yangon. According to OAG data the service ended on 22 May 2017. Hong Kong is still connected to Myanmar thanks to Cathay Dragon’s six times weekly service to Yangon, and a weekly service by Myanmar National Airlines to Mandalay.