2017 has got off to a flying start at Nuremberg Airport, with it recording a 23% increase in traffic for Q1. Not only that, but the airport was recently awarded with a highly commended accolade at the Routes Europe Marketing Awards in Belfast. Seen collecting the award from Steven Small, Brand Director of Routes, are Nuremberg Airport’s: Jürgen Kohstall, VP Marketing and Communications; Dr. Michael Hupe, CEO; and Christian Käser, Head of Aviation Marketing & Business Development. Along with this, the airport has also recently welcomed the arrival of bmi regional and its new service from Birmingham, a route that will be flown six times weekly on its fleet of ERJ 145s.

The city of Nuremberg is home to a population of over 500,000 people, an important industrial centre with a strong standing in the markets of Central and Eastern Europe. With a strong manufacturing prowess, items made in the area around the city include electrical equipment, mechanical and optical products, and printed materials. The city is also strong in the fields of automation, energy and medical technology, with one of the city’s biggest employers being Siemens. Nestled in the northern part of Bavaria, the city is served by Nuremberg Airport, the tenth largest airport in Germany which last year welcomed just under 3.5 million passengers. The airport has had many successes during the past year, including the opening of a new Ryanair base, and the team being highly commended at this year’s Routes Europe Marketing Awards in Belfast.

Nuremberg Airport has had an exceptional start to 2017, with Q1 traffic up 23% when compared to the same three-month period of 2016. Passenger figures for January were up 22%, while February indicated a 25% rise and March 23%. Looking at the international and domestic markets, the former welcomed a 37% increase in traffic during Q1, while the latter showed a more modest 3% rise, highlighting that international expansion is the driving force behind Nuremberg’s impressive growth. According to ADV monthly statistics, the average growth during the first quarter of 2017 across Germany’s leading airports was 4.5%, showing that Nuremberg is well above the national average. 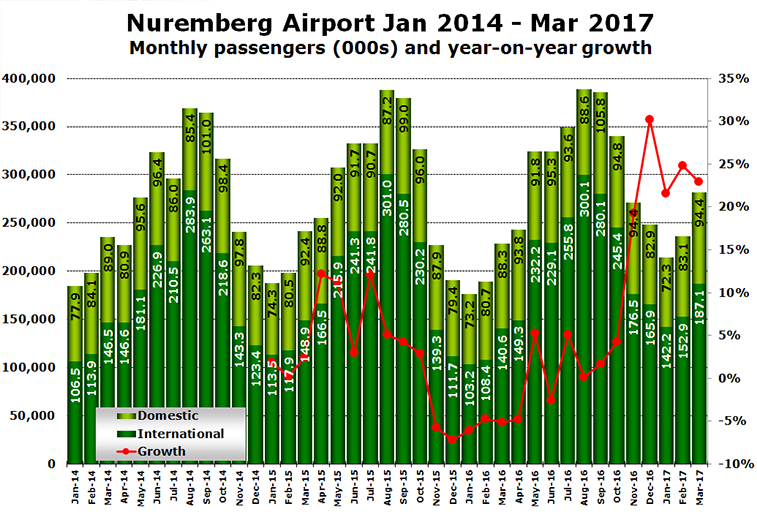 With the airport’s exciting growth comes the news that it is Germany’s fastest-growing top 10 airport for Q1, with only Berlin Schönefeld (sixth largest airport; 16% growth in Q1 2017) and Düsseldorf (third; 13%) also registering double-digit growth. If Nuremberg’s growth pattern continues throughout 2017, then it should welcome around 4.2 million passengers this calendar year.

When taking Nuremberg’s 2016 monthly passenger statistics and placing them in anna.aero’s Seasonal Variation in Demand calculator (SVID) it performs well, generating a score of 5.48 – a “Good” rating. This is an improvement from the 6.26 (also good) that it scored for its 2015 monthly statistics. What this indicates is that with Nuremberg’s impressive traffic growth, the impact has not damaged its seasonality. In fact with the seasonality profile of the airport being reduced, even with more traffic, shows that Nuremberg has demand for year-round services, not just summer seasonal ones when the airport is at its peak. 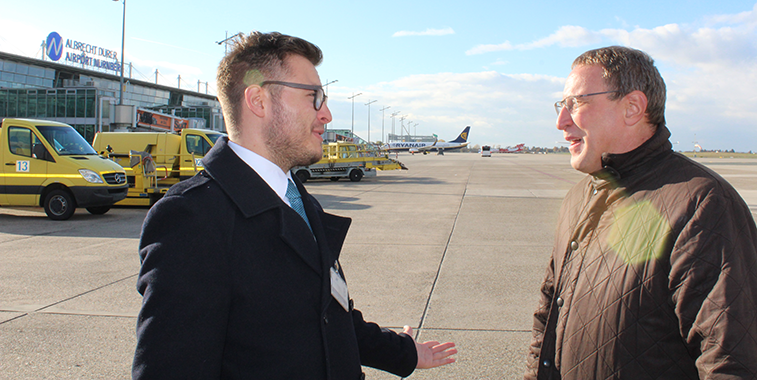 Last October, having attended the opening of Ryanair’s base at Nuremberg, anna.aero’s Assistant Editor Jonathan Ford was given a tour of the airport by its CEO Dr. Michael Hupe. One of the biggest developments at the airport during the last year was the base opening which has resulted in the airline becoming Nuremberg’s largest carrier this summer.

Since Ryanair opened its base at Nuremberg in October 2016, it now has two 737-800s stationed at the Bavarian airport and as a result it has grown to become Nuremberg’s largest airline. In total the ULCC occupies 18% of weekly departing seat capacity this summer, with its own individual seat capacity growing by over 420%, a result of the based aircraft. Last year the airline occupied 4.4% of weekly seat capacity during summer. In the past year the airline has opened flights to Bari, Budapest, Madrid, Manchester, Milan Bergamo, Palermo, Porto, Rome Ciampino and Verona from Nuremberg. In total the airline will offer 58 weekly flights from the city during S17. Wednesdays and Sundays are the busiest of the week with nine flights each, while the rest of the week sees eight daily departures. Looking ahead to W17/18, the most significant route that Ryanair will open from Nuremberg is Krakow, the first connection to be offered between the Polish and German sister cities, and Nuremberg’s first direct flight to Poland. Ryanair will also connect Nuremberg to Vilnius from the end of October. 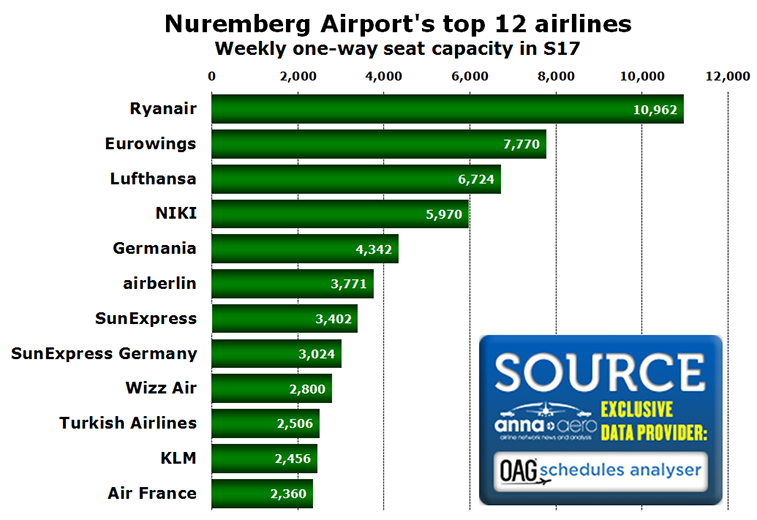 The most recent carrier to join the airline roll call at Nuremberg is bmi regional which began flights from Birmingham on 8 May, a route which will operate six times weekly and which anna.aero was fortune to attend the launch of. In total, weekly seat capacity this summer from Nuremberg has risen by nearly 32% when analysed with S16 data.

Antalya is fastest-growing route for Nuremberg in S17

With SunExpress increasing its seat offering between Nuremberg and Antalya by 128% during the past 12 months, the Turkish resort is the fastest-growing top 12 route from the German airport this summer. It is followed by London Stansted which has seen its capacity increase by over 71%, the result of Ryanair increasing its frequency to 12 times weekly (twice-daily Mondays to Fridays) from daily on the route to the UK capital. The leading route from Nuremberg this summer is Palma de Mallorca, a title it holds on to from S16 despite a 8.5% drop in capacity. Of Nuremberg’s top 12 routes, five (highlighted in light green) are domestic services. 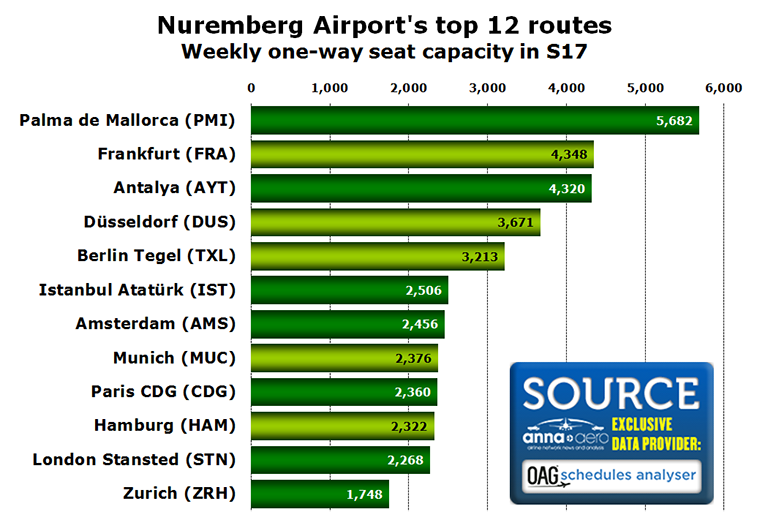 Looking at OAG schedules for this summer, Nuremberg will have direct flights to 58 destinations (w/c 13 June 2017), an increase of 15 when compared to the same week of 2016. Along with the new routes to Krakow and Vilnius being launched by Ryanair, other services that are to be introduced from Nuremberg during the remainder of 2017 include Adana, Athens, Dalaman, Reykjavik/Keflavik and Tel Aviv with Germania, with the latter two being the airport’s first flights to Iceland and Israel. Finally Wizz Air, which has grown its seat capacity from Nuremberg by 122% since last summer, will begin services from Kiev Zhuliany in August. 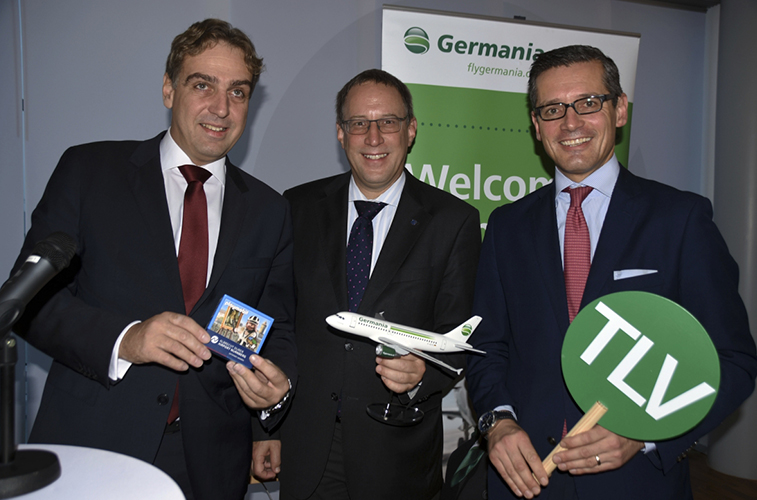 Looking ahead to the rest of 2017, one of the most significant route launches from Nuremberg is to Tel Aviv, a sector that will be inaugurated by Germania in November. Along with Tel Aviv, Germania will also add Reykjavik/Keflavik to its Nuremberg schedule from June, becoming the German airport’s first flights to Israel and Iceland. Other important route launches from Nuremberg in 2017 include Krakow and Vilnius with Ryanair, and Wizz Air adding Kiev Zhulyany flights.