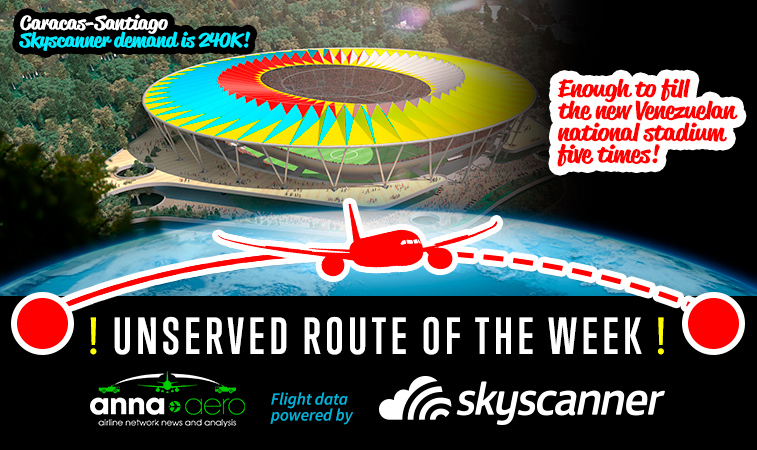 It’s not easy to be positive about Venezuela, but the strength of market demand is inescapable, with an incredible 240,000 searching Skyscanner annually for Caracas-Santiago flights. That’s enough to fill the new Estadio Nacional de Fútbol de Venezuela (opening autumn 2017) almost five times over, a tribute to both the potential of this unserved route, and Skyscanner’s market position in South America.

With nearly 240,000 searches in the last year, a potential city pair from Caracas to Santiago has been identified as this week’s “Skyscanner-anna.aero Unserved Route of Week” – a powerful analysis based on aspirational data captured from the Skyscanner.net flight comparison site used by +60 million unique visitors per month. 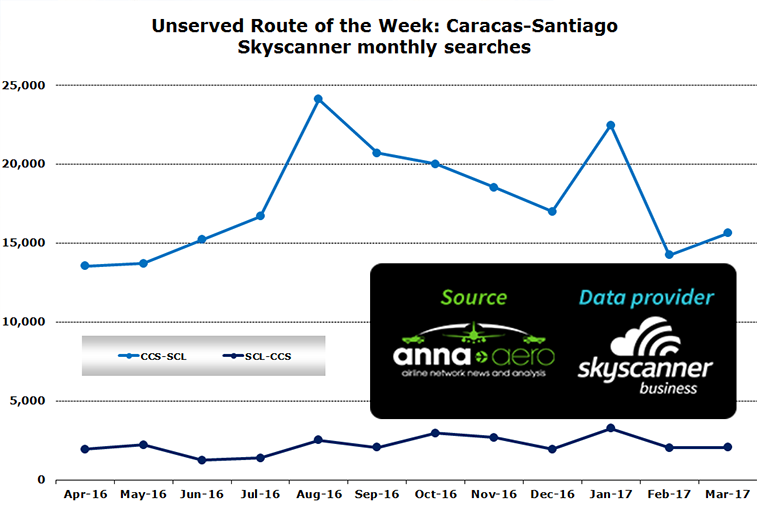 anna.aero to convince Conviasa or LATAM to add this link

Skyscanner demand on this week’s unserved route shows a significant bias towards the Caracas end of the city pair, with a 89/11 split, so on this basis we looked at potential carriers at the Venezuelan end first. Flag carrier Conviasa is the biggest carrier at the airport, although it far from dominates the capital city facility with just 17% of weekly seats according to OAG data for the week commencing 22 May. The airline currently offers 20 non-stop services from Caracas, of which only five are to international destinations (none in Chile) – namely Panama City, Buenos Aires Ezeiza, Guayaquil, Havana and Bogota. At 5,106 kilometres, Conviasa’s weekly service to the Argentinian capital is slightly longer than the potential 4,886-kilometre sector to Santiago, so clearly it has the operational capability to start the service. However, having consulted anna.aero’s new route database, the airline has not added a new route from Caracas for some time (and none are expected from Conviasa for the remainder of 2017), so the airline’s new route growth seems to have stagnated of late, but hopefully with this Skyscanner data now being made public, Santiago will be its next welcome addition.

Caracas’ second largest carrier is Laser Airlines, which holds a 15% share of weekly seats as a result of its five domestic sectors, as well as three international city pairs (none in Chile) to Panama City, Santo Domingo and Aruba. On this evidence, a sector to Santiago for the #2 carrier might be a network jump too far for Laser at this stage, so instead we look to the third largest airline at the airport, which is Aserca Airlines (10% share). The third largest airline is again a non-starter, as its network from Caracas is limited to domestic and regional services at this time. So it would seem that this unserved route opportunity is presently in the hands of Conviasa alone at the Venezuelan end of the potential city pair. 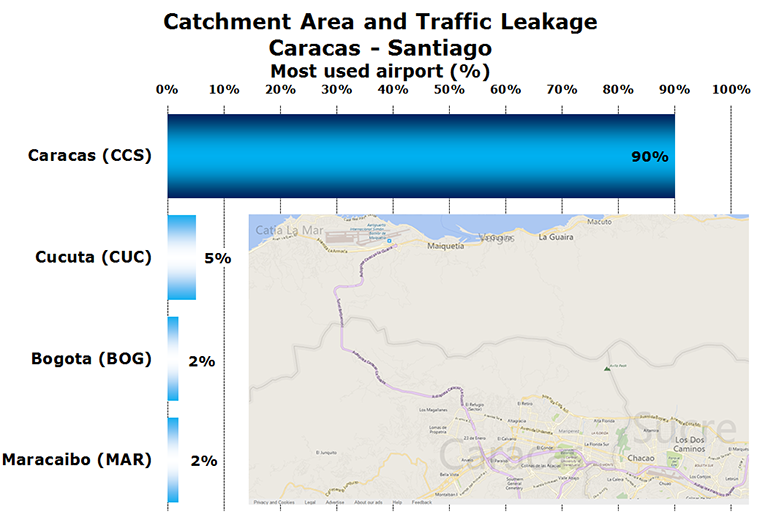 Faical Allou, Skyscanner’s Business Development Manager says: “Caracas serves 90% of the traffic from the catchment (100km around the airport) going to Santiago. With better service, such as a non-stop operation, the traffic could grow by up to 11%.” Note: given the sample size the confidence interval for the share of Caracas is +/-1%.

Contemplating the Chilean end of the route, the potential carriers in Santiago were considered next. The airport’s capacity is led by LATAM Airlines, which holds around 61% of weekly seats. The airline’s current 46-destination non-stop route network has a significant international proportion, including five city pairs in Upper South America, the region in which we also find Caracas. LATAM presently offers links to Lima (57 weekly flights; Peru), Bogota (14; Colombia), Guayaquil (eight; Ecuador), La Paz (four; Bolivia) and Santa Cruz Viru Viru (three; Bolivia) in the region. Although it has no services to Venezuela at this time, a route to the capital city would appear to be the most likely destination to added in the future, if and when LATAM chooses to extend its coverage in Upper South America to six cities.

When looking at the previous year of search data, the busiest month for potential traffic flows (for both directions on the route combined) is August 2016, with nearly 27,000 searches, over 10,000 higher than the lowest monthly figure, which was recorded in February 2017 (16,200 searches). The seasonality profile of this search data is less extreme than the last Unserved Route of the Week (Bilbao to Athens) with the low-month traffic representing 61% of the highest month. According to OAG Traffic Analyser, because there is no direct service, the top three connecting options chosen by those passengers who did book travel between Caracas and Santiago in the last year indicates that the majority of connecting travellers used Panama City (37%), Bogota (32%) and Lima (29%). In total 11 different airports were used by travellers to get between the two South American cities in the last 12 months.

With a lack of direct services, travellers between these two cities have clearly got used to these one-stop alternatives. However, the market demand is extremely buoyant – as the graph below shows, with 14% of the Skyscanner searches for these indirect Caracas to Santiago services converted into ticket sales – that’s more than the average 9.1% achieved for Skyscanner conversion/purchase rates for all direct routes available from either Caracas or Santiago. However, with nearly 240,000 annual searches a five times weekly or perhaps even a daily service should be immediately viable for the airline selecting to start this potential city pair. 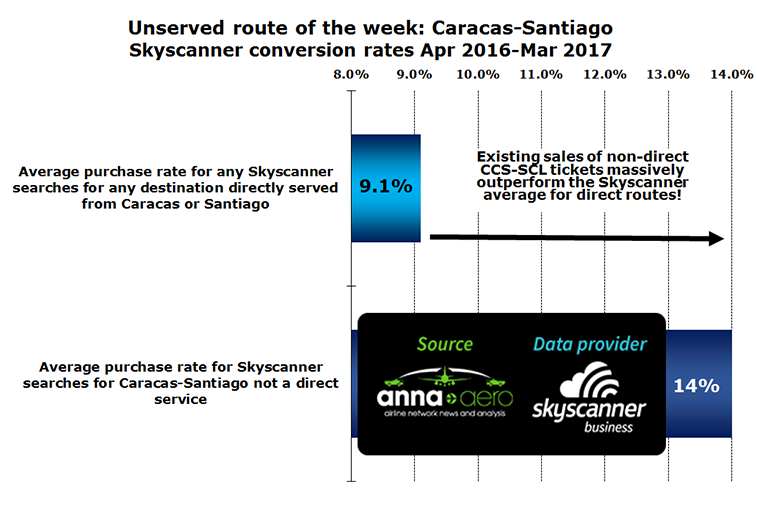