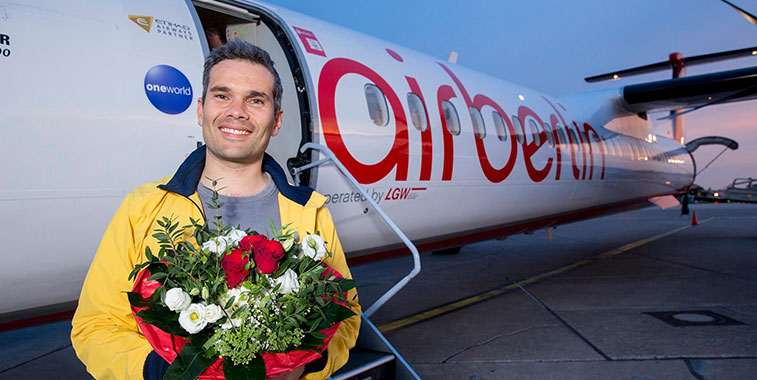 On 2 May 2016, airberlin launched a three times daily service between Düsseldorf and Bologna using Q400s operated by Luftfahrtgesellschaft Walter (LGW). The regional carrier operates 20 of the type which account for over one quarter of all airberlin’s flights at present and 13% of the oneworld carrier’s weekly seat capacity.

airberlin appears to be a step closer to taking full control of its regional partner Luftfahrtgesellschaft Walter (also known as LGW – not to be confused with London Gatwick!) according to news reports in Germany, after the government gave its approval to the proposed full takeover. The Dortmund-headquartered regional carrier has been an airberlin partner for a decade, currently operating a fleet of 20 Q400s on behalf of the oneworld carrier. According to OAG data for the week commencing 29 May, these aircraft account for just over 27% of the airline’s weekly flights and 13% of its weekly seat capacity.

The Q400s operate a total of 22 routes, 13 from Düsseldorf and nine from Berlin Tegel, ranging from the 280-kilometre sector from the German capital to Prague, to the 895-kilometre sector from Düsseldorf to Florence. These 22 routes have an average weekly frequency of just over 18 flights per week, equating to roughly three flights per day on weekdays with reduced frequency at the weekends. The most recently launched routes were from Düsseldorf to Bologna (May 2016) and Geneva (November 2016), though the Berlin Tegel to Gdansk service resumed on 4 May 2017 after a 13-month hiatus. 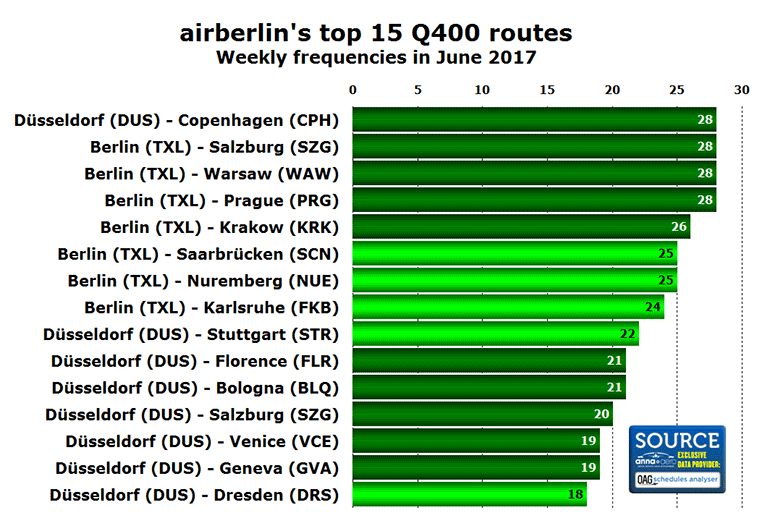 Five of the top 15 routes by weekly frequency are domestic routes (shown in bright green), while Salzburg services account for a further two routes. The remaining eight routes involve three routes to Italy, two to Poland and additional routes to the Czech Republic, Denmark and Switzerland. The seven other routes not in the top 15 include five more domestic routes plus Berlin to Gdansk and Düsseldorf to Milan Linate.

Would help airberlin secure slots at its two main bases

With airberlin focusing its hub networks in Berlin and Düsseldorf, taking full control of LGW would secure its slots at these busy airports. This may be important for the future with speculation that it is only a matter of time before Lufthansa makes a move to acquire its financially-troubled local rival.