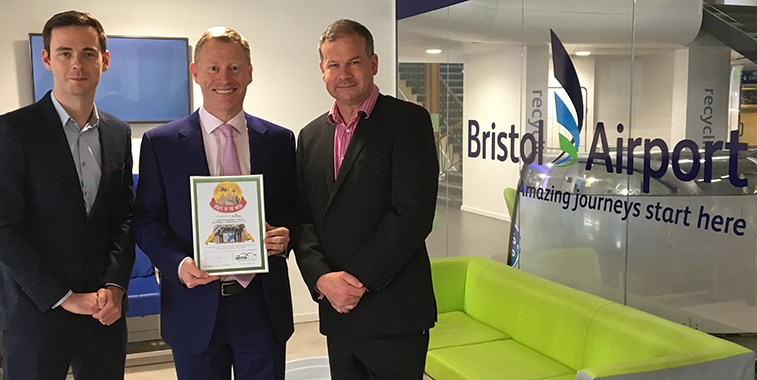 Bristol Airport this week celebrated winning the anna.aero Route of the Week award, given to the airport in recognition of the return of British Airways after a 10-year hiatus. The oneworld member now offers weekly flights from Bristol to Florence, Ibiza, Malaga and Palma de Mallorca. Seen celebrating the airport’s Route of the Week win are: Pete Downes, Head of Aviation Development; Robert Sinclair, CEO; and Shaun Browne, Aviation Director. 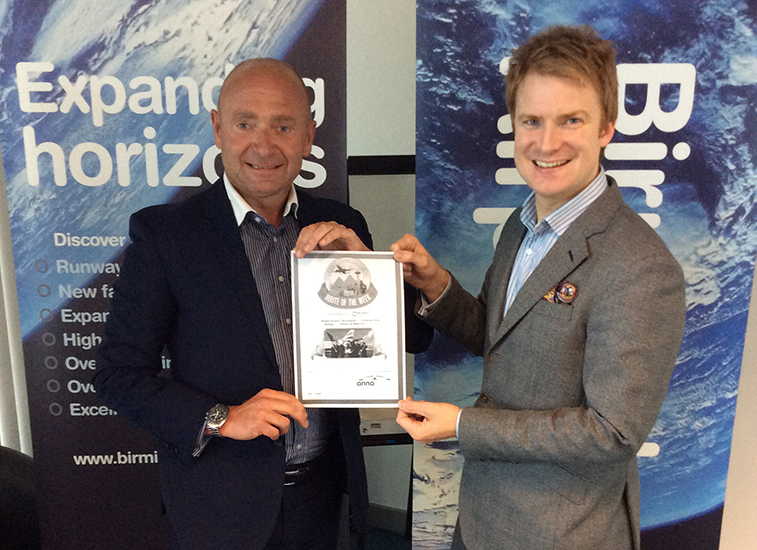 Birmingham Airport also received the Route of the Week title for the return of British Airways on 20 May, with the oneworld member also serving the same four routes that it does from Bristol. Seen showcasing Birmingham’s win are the airport’s William Pearson, Aviation Development Director and Tom Screen, Head of Aviation Development. Along with BA, other oneworld members operating into Birmingham are Iberia Express from Madrid and Qatar Airways from Doha. 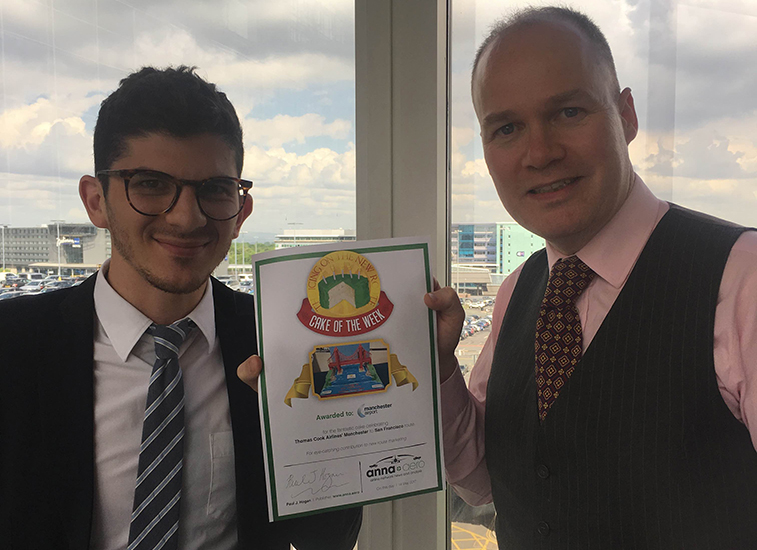 Manchester Airport was recently awarded the anna.aero Cake of the Week award, given for the Golden Gate Bridge-inspired cake which it baked for the start of Thomas Cook Airlines’ new service to San Francisco. Seen posing with the certificate are the airport’s Nico Spyrou, Trade Marketing Manager and Patrick Alexander, Head of Marketing. 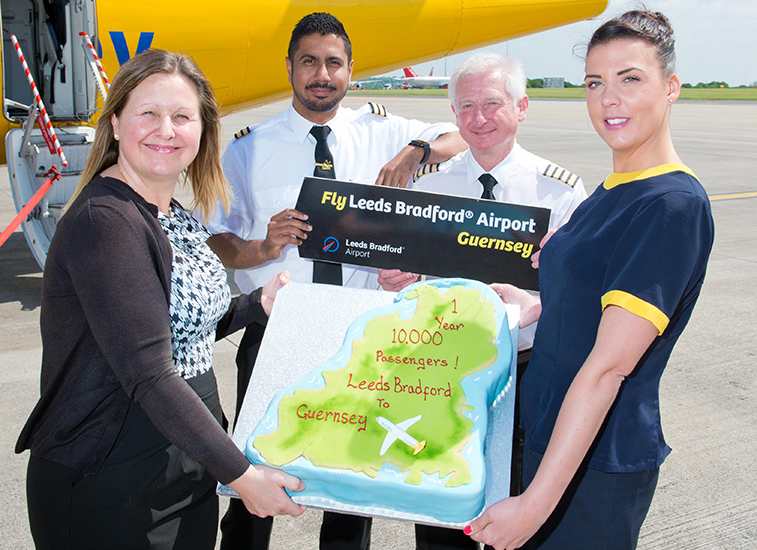 Aurigny celebrated the one-year anniversary of flights between Guernsey and Leeds Bradford on 26 May, with the airline having flown 10,000 passengers on the route during its first year. Commenting on the anniversary, Aurigny’s Commercial Director Malcolm Coupar said he was pleased with the popularity of the route in its maiden year: “The Leeds Bradford service has proved to be a great success, with well over 10,000 passengers in our opening year, exceeding all our expectations.” Seen posing with the cake that was baked to mark the anniversary are Emma Holliday, Aviation Sales Manager, Leeds Bradford Airport, along with Captain Peter Saunders and Senior Cabin Crew Member Sophie Scott. On 30 May Southampton Airport celebrated passing the two million passenger barrier within a 12 month period. Between May 2016 and April 2017 the airport welcomed 2,029,873 passengers, up 14% when compared to the same time period the year before. The airport held a celebration outside the terminal and made some special cupcakes. Dave Lees, MD Southampton Airport, said of the news: “We are thrilled to have hit the two million passenger milestone. The airport has been working extremely hard to deliver the routes and services that our passengers demand. We’ve enjoyed tremendous success over the course of the past 12 months in strengthening our route network and this has translated into passenger growth.” 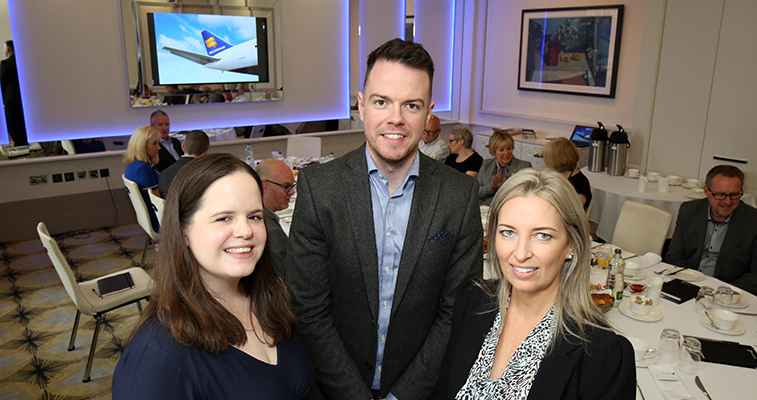 Belfast City Airport held a VIP trade breakfast for its next airline partner this week, Icelandair. From 1 June the carrier will offer three weekly flights between Belfast and its hub at Reykjavik/Keflavik. Seen here at the breakfast are: Ellie McGimpsey, Business Development Manager, Belfast City Airport; Mike Reynolds, Account Manager at Icelandair; and Diane Risk, Travel Trade Consultant at Belfast City Airport. Reynolds added by saying: “I was delighted to be offered the opportunity to speak directly to the Northern Irish travel trade about our product and what it can offer local travellers. The route, which will operate on Tuesdays, Thursdays and Sundays, will not only provide a link to the wonderfully unique city of Reykjavik, but will also offer smooth connections with a host of cities in the US and Canada including Boston, Seattle and Toronto.” 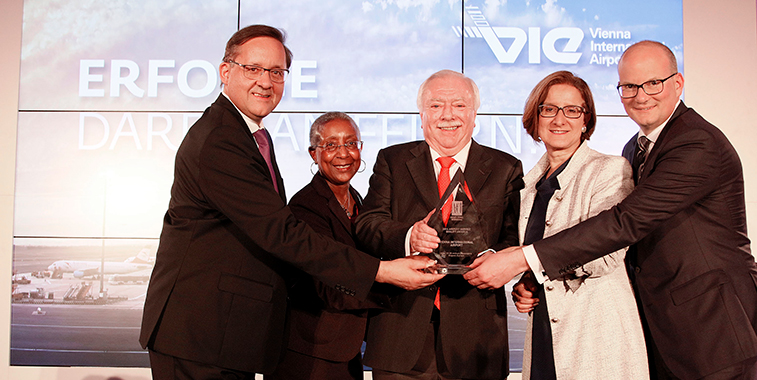 Airports Council International (ACI) this week presented Vienna Airport with the gold award in the category ‘Europe and 15-25 Million Passengers’ for its outstanding service quality. Seen at the award presentation are Günther Ofner, Member of the Management Board, Vienna Airport; Angela Gittens, Director General, Airports Council International (ACI); Michael Häupl, Mayor of the City of Vienna; Johanna Mikl-Leitner, Governor of Lower Austria; and Julian Jäger, Member of the Management Board Vienna Airport. Aberdeen Airport officially opened its new international arrivals facilities on 30 May. Arriving passengers were welcomed into Aberdeen’s new facility with a surprise performance by the world’s most famous bagpipe band: The Red Hot Chilli Pipers. The first international passengers arrived from Stavanger at 07:30 and were able to use the airport’s new passport control and baggage reclaim facilities. Seen celebrating the opening of the arrivals facility are: Carol Benzie, MD Aberdeen Airport; Karen Bain, traditional piper and Terminal Safety Officer, Aberdeen Airport; and John Deffenbaugh, Head of Capital. Benzie said of the opening: “The launch of our new international arrivals facility marks the first stage of several years of planning, and it is so exciting for us to see those plans start to come into reality today.” The full terminal transformation project is due to be completed by 2019 with this, the first phase of the project, launching a month ahead of schedule. 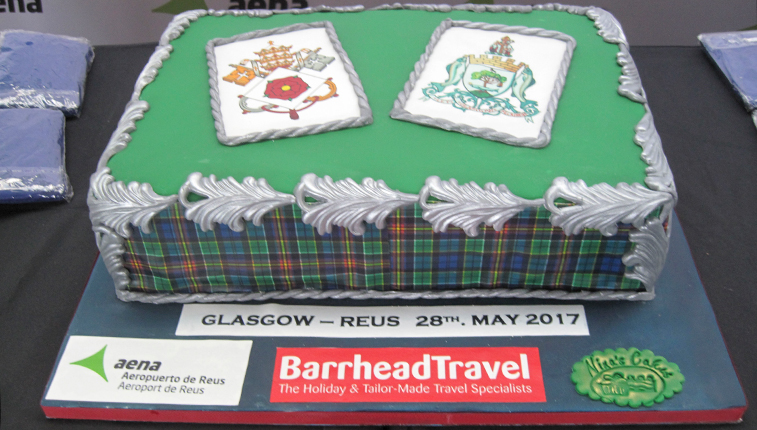 Reus Airport celebrated the arrival of Barrhead Travel charter flights from Glasgow on 28 May, with the Spanish airport baking this tartan-themed cake to celebrate the new operation. Flights, which according to Barrhead Travel’s website will be flown by British Airways weekly, leave Glasgow at 05:45 on Sundays, arriving in Reus at 09:25. Flights will operate throughout S17 according to the travel company’s flight booking engine on BA CityFlyer E170s and E190s.