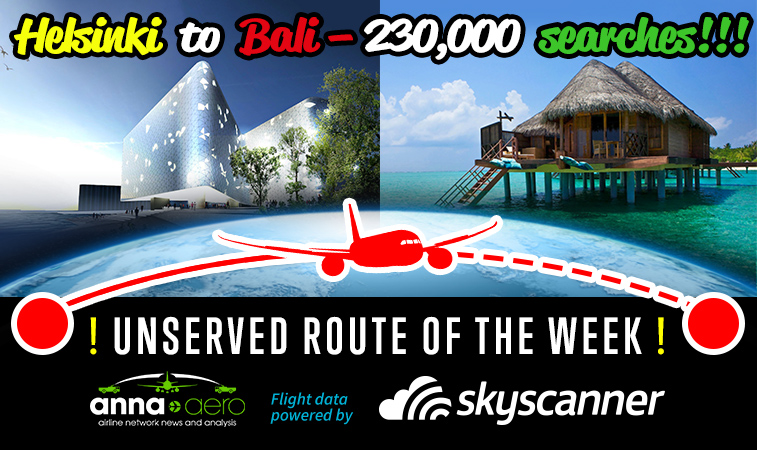 With nearly 230,000 searches in the last 12 months, a potential city pair from Helsinki to Denpasar has been identified as this week’s “Skyscanner-anna.aero Unserved Route of Week” – a powerful analysis based on aspirational data captured from the Skyscanner.net flight comparison site used by +60 million unique visitors per month. “Helsinki already has 18 direct destinations in Asia serving all the main mega cities,” says Timo Jarvela, Head of Accounts and Route Development, Finavia. “Denpasar via Helsinki to Europe would provide the shortest and fastest routing from Bali to all main European markets.” 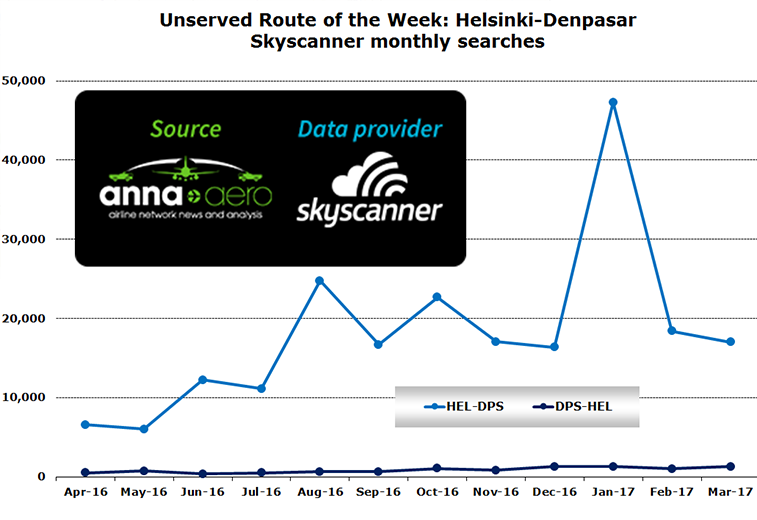 anna.aero to convince Finnair or Garuda to go for this route

Skyscanner demand on this week’s unserved route shows a significant bias towards the Helsinki end of the city pair, with a 95/5 split, so on this basis we looked at potential carriers at the Finnish end first. Flag carrier Finnair is the biggest of the 28 serving carriers at the airport, dominating the capital city facility with 66% of weekly seats according to OAG data for the week commencing 30 May. The airline currently offers 99 non-stop services from Helsinki, of which 14 are to Asian destinations – many of these are also served on at least a daily basis. On some of the smaller destinations operated by the oneworld carrier – such as Fukuoka in Japan or Xi’an in China – it is the only European airline flying to these cities (China Eastern Airlines and Hainan Airlines also fly to Europe from Xi’an), and the sectors rely on substantial levels of connecting traffic from its European feeder services. An operation for Finnair to Denpasar would similarly fall into this category too, as no other airline presently offers direct services to Bali from Europe. Asian destinations, with a predominantly leisure mix of traffic are also seemingly on the airline’s agenda, as it intends to launch a twice-weekly A330-300 operation to Goa in India on 29 November this year. On this basis, and hopefully augmented with this Skyscanner data now being made public, Denpasar will be the next welcome addition in this market segment for Finnair.

Helsinki’s second largest carrier is Norwegian, which holds a 11% share of weekly seats as a result of the 25 domestic and European sectors flown from the airport. Unlike Scandinavia’s three other big hubs where the airline has long-haul kit based – Copenhagen, Oslo Gardermoen and Stockholm Arlanda – Norwegian does not have any of its 787-8s or 787-9s based in Finland at this time. So it would seem that this unserved route opportunity is presently in the hands of Finnair alone at the Finnish end of the potential city pair. Jarvela is still upbeat and thinks the market potential numbers speak for themselves. “Denpasar is the main unserved O&D market in Asia from Helsinki, with 17,000 O&D passengers and growth of 49% in the last 12 months.” 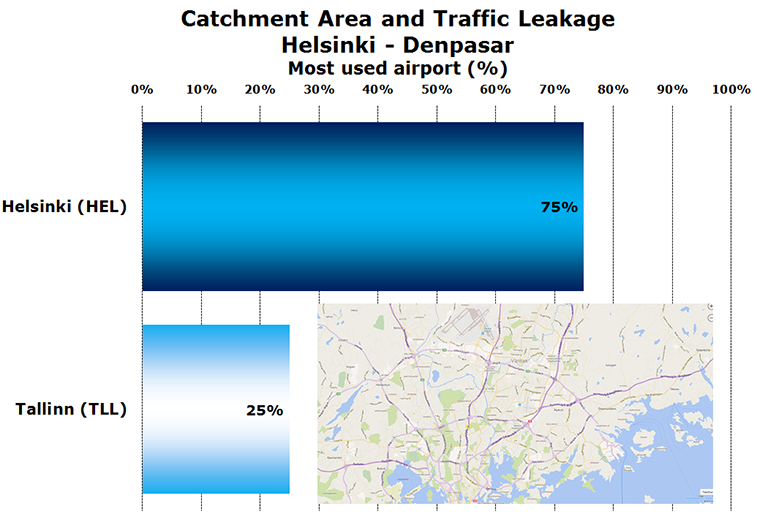 Faical Allou Skyscanner’s Business Development Manager says: “Helsinki serves 75% of the traffic from the catchment (100 km around the airport) going to Bali. With better service, such as a non-stop operation, the traffic could grow by up to 33%.” Note: given the sample size the confidence interval for the share of Helsinki is +/-3%.

Considering the Indonesian end of the route, the potential carriers in Denpasar were contemplated next. The airport’s capacity is led by Garuda Indonesia, which holds around 22% of weekly seats. The airline’s current 29-destination non-stop route network has a significant international proportion, including three city pairs in Australia (Sydney, Melbourne and Perth), and the airline does utilise its 777-300 and A330-200/300 fleets from the airport (predominantly for domestic and traffic-heavy regional routes), but it does not offer any city pairs outside of Asia and Australasia. The third largest airline at Denpasar (short-haul LCC Lion Air is #2 with 16%) is AirAsia X Indonesia with 6.8% of weekly seats. Again, while it does fly long-haul capable aircraft from Bali, its A330-200s are flown on a limited regional network to Tokyo Narita (launched on 24 May), Kuala Lumpur and Mumbai (via Kuala Lumpur) only. On this basis, a new service to Helsinki from the Indonesian end of the airport pair, should be considered as unlikely at this point in time, but with national carrier Garuda best placed to react should market conditions alter.

When looking at the previous year of search data, the busiest month for potential traffic flows (for both directions on the route combined) is January 2017, with nearly 48,000 searches, nearly 42,000 higher than the lowest monthly figure, which was recorded in May 2016 (6,800 searches). The seasonality profile of this search data is significantly more extreme than the last Unserved Route of the Week (Caracas to Santiago) with the low-month traffic representing just 14% of the highest month. According to OAG Traffic Analyser, because there is no direct service, the top three connecting options chosen by those passengers who did book travel between Helsinki and Denpasar in the last 12 months indicates that the majority of connecting travellers used Hong Kong (40%), Doha (31%) and Singapore (21%). Looking at the traffic flows in the opposite direction, Singapore has leapt to top spot (28%), with Doha still in second place (27%) and Amsterdam now in third position (7.6%).

Indeed, an O&D that is not served by a non-stop flight will typically display a low purchase rate and low traffic. In this instance Skyscanner’s Travel Insight indicates a monthly average of 5.2% for the Helsinki to Denpasar route (see graph below). Therefore, if there was a Helsinki to Denpasar route, and if bookings performed in line with the “Skyscanner market average” for direct services at both airports (8.8%), the airline operating this route could immediately expect an improved purchase rate of 71%, without any increased marketing spend. However, with over 230,000 annual searches in the past year, at least a three or four times weekly leisure service should be immediately viable for the airline selecting to start this potential city pair. 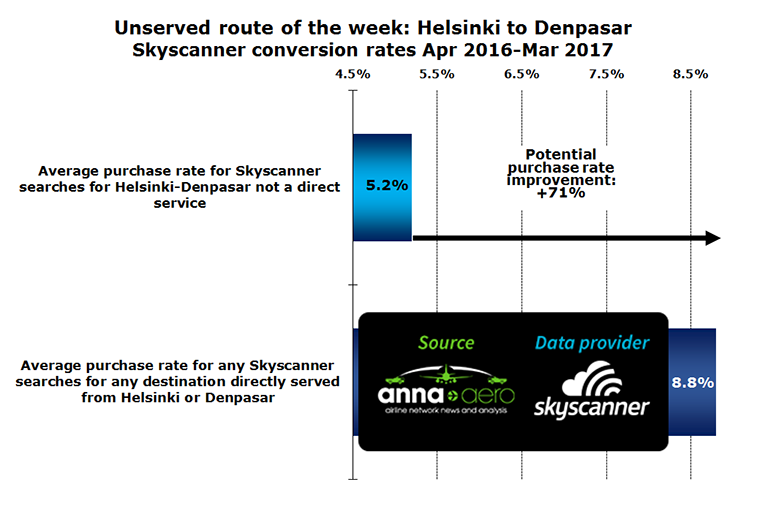