Icelandair inaugurates new services to the UK and US Belfast City Airport stepped up the game in the global battle for Cake of the Week by introducing 4D effects to its route launch showstopper to celebrate the arrival of Icelandair, with the cake smoking to represent the volcanic activity of Iceland. Once the smoking had ended, the VIPs of the route launch posed with the culinary masterpiece, including: Ciaran Doherty, Head of Co-operative Marketing at Tourism Ireland; Brian Ambrose, CEO Belfast City Airport; Arni Gunnarsson, CEO of Air Iceland; and Gerry Lennon, CEO Visit Belfast. Flights between Reykjavik/Keflavik and Belfast City will operate three times weekly on Air Iceland Q400s. 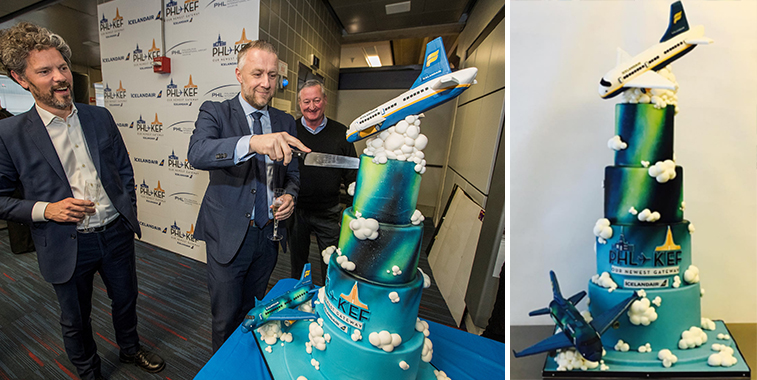 Like Belfast City, Philadelphia too has put in a strong performance with its route launch cake, with this mightily impressive four-tier Northern Lights-themed cake which was made by The Night Kitchen Bakery & Cafe. Seen watching over Icelandair CEO Birkir Holm Guðnason as he tentatively cuts the calorific tower are Reykjavik Mayor Dagur Eggertsson and Philadelphia Mayor Kenney. Icelandair will operate four weekly flights to Philadelphia on its 757-200s.