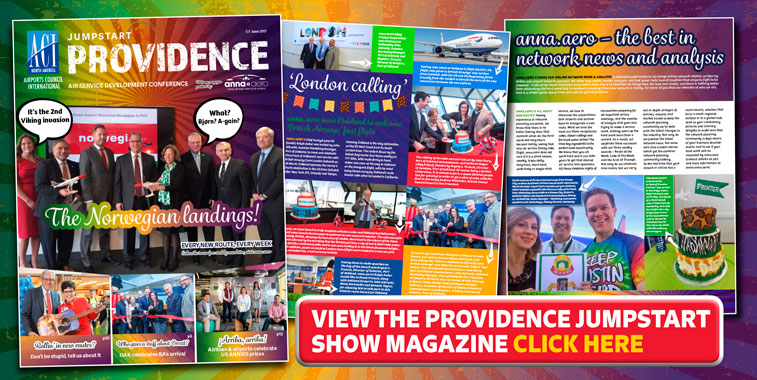 Read our electronic version of the anna.aero Show Daily magazine, created for the ACI-NA JumpStart Air Service Development Conference, hosted by Providence Airport. There are 28 pages to enjoy, including an interview with the hosts, some of our trademark analysis, as well as plenty of pre-show news.

Wedged snugly between Routes Europe in April (held in Belfast) and the IATA Slot Conference this month (in Kuala Lumpur next week), there is a North American air service development event this week ‒ ACI-NA JumpStart, hosted this year by Providence Airport. Attendance this year is high, with some 450+ air service colleagues assembled in Rhode Island, and representation from over 30 airlines. As a result of this attendance, there will have been more than 1,300 one-on-one meetings by the end of the conference. The event, included an opening keynote speech from Dave Clark, VP, Sales and Revenue Management, JetBlue Airways. The delegate magazine is rammed full of coverage from attending airports, informative interviews, as well as an overview of what anna.aero is all about – not just cakes and fire truck water arches!