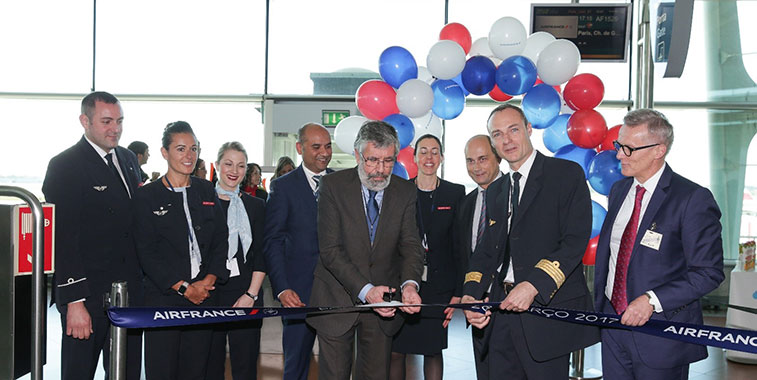 Route launch pictures from Paris CDG are hard to find so here’s a picture from Porto celebrating the launch of Air France’s new service to the Portuguese city on 28 March of this year. This summer Air France has also launched new routes from the French capital to Accra, Agadir, Marrakech, Milan Malpensa and Palma de Mallorca.

Paris CDG (Charles de Gaulle) Airport is Europe’s second busiest, handling almost 66 million passengers in 2016. Only London’s Heathrow Airport is busier (with 75.7 million passengers last year), but whereas the UK airport currently has just two runways, the airport serving the French capital has four. Located some 25 kilometres northeast of Paris, it is more than twice as busy as the constrained Paris Orly Airport, which is around 13 kilometres south of the French capital.

After rapid growth in the late 90s, passenger demand has grown by just 37% in the 16 years since 2000. Since the turn of the millennium growth has only exceeded 5% on three occasions, with the last of those being back in 2007. At just 0.3%, last year’s growth was the slowest at the airport since the 2009 recession-influenced decline of just under 5%. According to UAF statistics, low-cost airlines accounted for just over 12% of the airport’s traffic in 2016, up from 8% in 2009. However, despite its relatively small share of the market LCCs have been responsible for 42% of the airport’s growth since 2009, increasing from 4.6 million to 8.0 million (or 74%), while non-LCC traffic grew by just 9% over the last seven years. 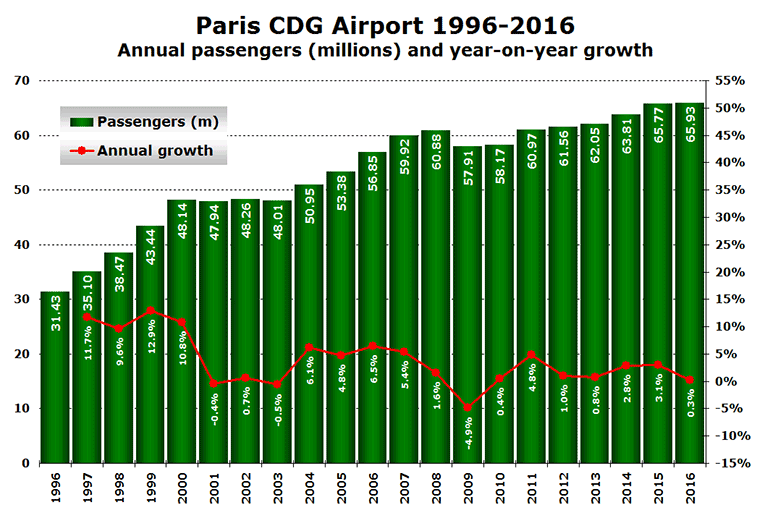 August is traditionally the airport’s busiest month, with passenger numbers reaching between 6.5 and 6.7 million in each of the last three years. February is the quietest month with around 4.5 million passengers, resulting in the airport scoring an “excellent” 1.57 on anna.aero’s Seasonal Variation in Demand (SVID) calculator in 2016. This is an improvement on the “good” score of 2.18 that the airport achieved in 2015

Analysing OAG schedule data for 2016 and 2015 reveals that Air France is by far the biggest carrier (no surprise there), with easyJet second. The French flag carrier’s one-way seat capacity is almost eight times more than that of the UK-based LCC. However, easyJet itself is almost three times bigger than the third busiest airline at CDG, namely Air France’s US SkyTeam partner Delta Air Lines. Air France will this summer offer passengers over 150 destinations served non-stop from CDG.

Among the top 15 airlines, four showed significant growth in 2016 in terms of scheduled seat capacity; Vueling grew by 62%, Flybe by 51%, Air Algérie by 41% and American Airlines by 30%, though the latter’s growth was from the merger of its operations with US Airways. Several airlines, including Air France, had virtually unchanged capacity at the airport. Flybe’s growth was helped by its new routes from Doncaster Sheffield, London City and Southampton, as well as frequency increases from Cardiff and Manchester. Vueling launched eight new routes in May 2016, meaning that it operated a total of 13 routes from CDG last summer, as well as 19 from Paris Orly. 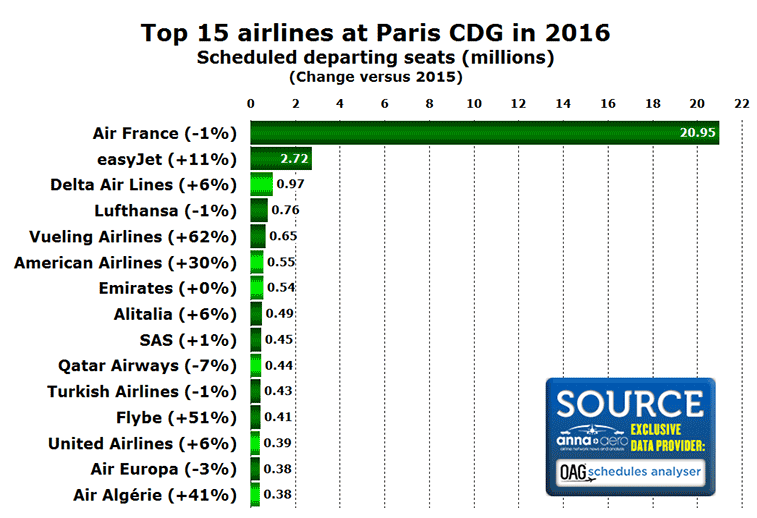 Of the top 15 airlines, six (highlighted in bright green) are based outside of Europe; three in the US, two in the Middle East and one in Africa. In total, around 100 airlines offer regular scheduled flights from Paris CDG, which is more than at any other airport in Europe.

While domestic routes dominate at Paris Orly (accounting for 37% of seats, well ahead of Spain with 11%), at Paris CDG the US market leads the way with over four million one-way seats in 2016 compared with 3.3 million on French routes. The five biggest European markets rank second to sixth, with China the second biggest non-European market in seventh place. The UK (+16%) and Algeria (+20%) were the fastest-growing markets among the top 15 countries. Non-European country markets are shown in bright green. 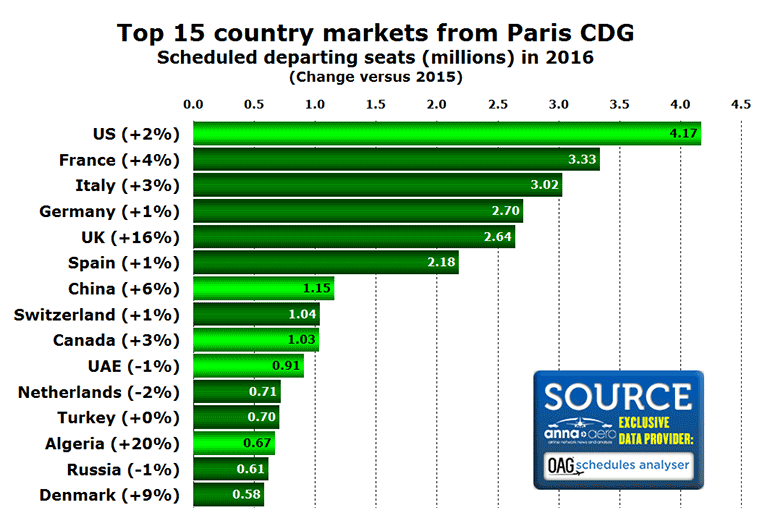 Outside the top 15 there were significant double-digit declines for Japan (-19%), Norway (-15%) and Morocco (-13%). Overall, while passenger numbers grew by just 0.3%, according to OAG data, seat capacity grew by 1.7% last year, suggesting a small drop in average load factor at the airport.

Passenger numbers in the first four months of 2017 are up an excellent 5.3% to 20.9 million (at Paris Orly they are up 6.4%). As a result, CDG’s rolling 12-month total has now almost reached 67 million passengers. By the end of July, Air France will have added new routes from CDG to Accra, Agadir, Marrakech, Palma de Mallorca and Porto, as well as having resumed multiple daily flights to Milan Malpensa. Meanwhile easyJet has added a new route to Bilbao, while suspending service to Naples.

Other new services launched so far in 2017 include: airBaltic to Vilnius; airberlin to Berlin Tegel; Eurowings to Munich and Salzburg; FlyOne to Chisinau, while SmartWings has begun seasonal, low-frequency services to Fuerteventura, Gran Canaria, Heraklion, Lanzarote and Palermo.