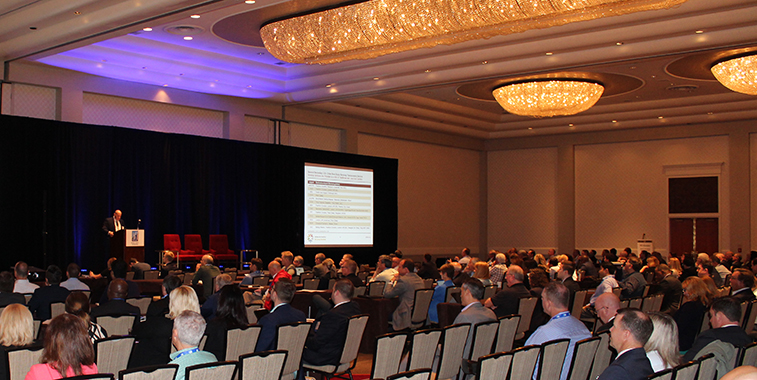 At the start of June, anna.aero, along with many North American airlines and airports, attended the annual ACI-NA JumpStart Air Service Development Conference in Providence, Rhode Island. More than 1,300 one-on-one meetings took place over the course of the event, with over 450 air service colleagues representing multiple airports and 30+ airlines.

Between 5-7 June, ACI-NA’s annual JumpStart Air Service Development Conference took place at the Omni Hotel in Providence, Rhode Island. Attendance at this year’s conference was high, with some 450+ air service colleagues assembling in Providence, including representation from over 30 airlines and multiple airports. As a result of this attendance, more than 1,300 one-on-one air service development (ASD) meetings took place by the end of the conference. Along with various airports and airlines from North America, anna.aero was there too, producing one of its famous show daily magazines for the third-year running – click here to take a look – featuring the latest news and developments from various airports attending the conference, including the host, Providence Airport. It is also known as T. F. Green Airport, and has just welcomed its first Norwegian-operated transatlantic flight from Edinburgh, with services from Belfast International, Bergen, Cork, Dublin and Shannon soon to follow.

June has been a very exciting month for Providence, not only with the arrival of Norwegian, but also because during JumpStart, Allegiant Air announced that it will begin serving Providence from Punta Gorda (starts 28 September), St. Pete-Clearwater (27 October) and Cincinnati (17 November). Iftikhar Ahmad, President and CEO of the Rhode Island Airport Corporation, said of Allegiant Air’s announcement: “Ultra-low-cost non-stop service to these popular markets is certain to attract more passengers to Providence. We know these flights will be popular, not only because of Allegiant Air’s great fares, but the destinations are also important to our customers. We welcome our new partner to T.F. Green Airport and look forward to a long and successful relationship.” However the good news does not stop at Allegiant Air. It is now the third carrier to announce that it will start flying to Providence in 2017. Along with Norwegian and the Las Vegas-based ULCC, from August Frontier Airlines will begin flights to Providence from Orlando and Denver, with the latter becoming the first connection between the state capitals of Rhode Island and Colorado. 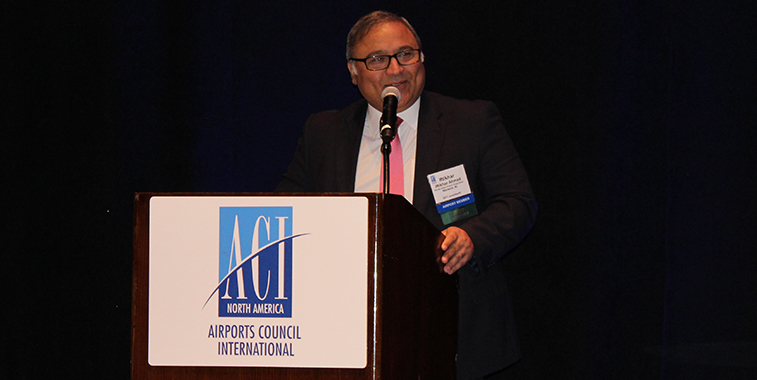 The 2017 JumpStart Air Service Development Conference was kicked-off Iftikhar Ahmad, President and CEO of Rhode Island Airport Corporation (RIAC), host of this year’s event. “Firstly I would like to thank you all for coming to Providence and I hope you enjoy your next few days in this great city. With many meetings booked, I wish you all the best of luck in developing and gaining new air services,” commented Ahmad, who went on to introduce the next speaker, Kevin Burke. 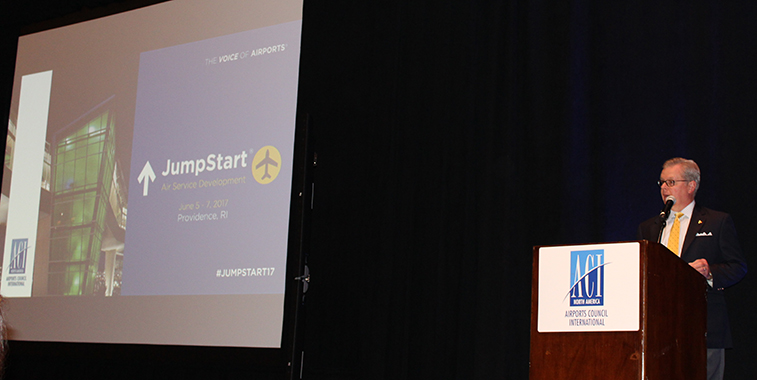 The welcoming address to this year’s JumpStart was conducted by Kevin Burke, President and CEO of ACI-NA. “With more than 1,300 one-on-one meetings taking place over the course of the next few days, with over 450 air service colleagues representing some 100+ airports and 30+ airlines, it is surely going to be yet another successful JumpStart,” commented Burke. This year’s JumpStart Keynote Address was conducted by Dave Clark, VP Sales and Revenue Management, JetBlue Airways. Among the highlights of Clark’s presentation was the expansion of the airline’s Mint services which will soon encompass Las Vegas, San Diego and Seattle-Tacoma. “We are the number one airline when it comes to customer satisfaction, the number one mid-size and low-cost airline in North America and once again we have been voted among the top 10 best airlines in the world by Tripadvisor,” commented Clark. “What we aim for is to be a low-cost carrier, by keep fares as low as possible, but at the same time having a network that fits similarly into that of a hub and spoke airline. With that JetBlue has low costs but high revenues,” adds Clark. After Clark’s presentation, the next speaker on the stage was Faye Malarkey Black, President, Regional Airline Association. Among the highlights of Black’s presentation was that pilot shortages will increase at a greater demand year-on-year, and by 2026 there will be a shortfall of over 13,000 pilots in the US. Other highlights from the presentation included the development of air services at US airports between 2013 and 2016. “Between these years, 39% of US airports experienced schedule reductions of 10% or more, with 23% of airports seeing a reduction of over 20%, while 18 airports lost air service all together,” informed Black. While reductions have been seen at multiple airports, it is still not bad news for the US. “Between 2013 and 2016, 26% of US airports have witnessed a growth of 10% of more in seats, with 33 of those airports seeing a loss in the number of departures despite increased seat capacity,” added Black. Next to speak was Courtney Miller, Director, Lessor Sales, Bombardier Aerospace. The main highlight of Miller’s vibrant presentation was that there are still 360 markets in the US that are not yet served by a US LCC, with the full service carriers still having the monopoly on those routes. However entering these markets is not as easy as it sounds according to Miller: “What we have seen over the past few years is that airlines are converting to larger aircraft at unsustainable rates. What this has caused is the vicious cycle of unit costs. With larger aircraft comes increased capacity and therefore lower yields. But while having lower unit costs has its advantages, if you cannot create the revenue with more seats it results in a lost route which is a worse-case scenario for an airport and airline. What that means is that you need lower unit costs to make the route work and then we get to the start of the cycle again,” informs Miller. Using Southwest Airlines as an example, with it up-gauging to 737-800s from -700s, it has dropped 178 routes in recent years. The final speaker before the beginning of the Plane Talk Sessions was John Heimlich, VP and Chief Economist, Airlines for America. Among the highlights of his presentation was that since 2002 the Canadian share of traffic on transborder connections has increased, and in 2006 it became the larger of the two markets in US-Canada traffic, with its share of O&D passengers now accounting for nearly 55% of traffic. Along with looking at the transborder market, Heimlich also spoke about the growing long-haul connections to secondary US cities. “Markets such as Providence are now welcoming growing numbers of transatlantic flights, and this trend is starting to be shown throughout the US with secondary cities seeing more and more long-haul services,” informed Heimlich. Among the selected route case studies were: Pittsburgh and its new WOW air and Condor services; San Jose, Oakland and New Orleans’ new British Airways routes; and Norwegian’s expansion from Oakland.

Once the initial speakers had presented their findings about the changes and challenges of US ASD, it was then time for the Plane Talk Sessions to take place. With ASD remaining a very important challenge for the majority of airports, Plane Talk focused on ASD from an airline perspective, giving airports a unique view into how various carriers deal with managing and developing their route networks. Carriers provided attendees with a 30-minute overview of the latest updates from their airline including network additions, changes to the fleet and insights into the future. The Plane Talk speakers at this year’s JumpStart included: John Kirby, VP Capacity Planning, Alaska Airlines; David Sunde, Director, Network and Operations Planning, Surf Air; Lukas Johnson, SVP Commercial, Allegiant Air; and Mark Weithofer, Senior Manager, Domestic Network Planning, United Airlines. The first of the four Plane Talk Sessions was delivered by Alaska’s Kirby. He was introduced to the stage by Pat Rowe, Marketing & Communications Director, Milwaukee Airport. “With the merger with Virgin America, we are not looking to shrink operations, the focus is on growth. Since the announcement we have not lost any cities from the network, and we have seen a 21% increase in routes since the news of the merger broke,” commented Kirby. “The merger has been a great success, as both airlines are sharing and learning new ideas that we keep bouncing off each other.” 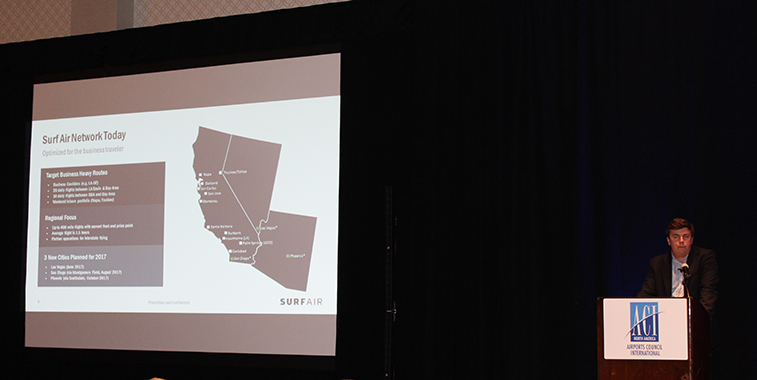 Once Kirby of Alaska Airlines had concluded his presentation, it was then time for David Sunde, Director, Network and Operations Planning, Surf Air to take to the stage. “For 2017 we have three new cities planned to join the Surf Air network, including Las Vegas which will join this month, San Diego [via Montgomery Field; planned for August 2017] and Phoenix [via Scottsdale; October 2017],” commented Sunde. By introducing flights to Las Vegas and Phoenix, these will be Surf Air’s first flights outside of California. Surf Air is the first private air travel club of its kind offering all-you-can-fly service for one monthly fee. It provides its members with an effortless flying experience that saves valuable time. Operating a fleet of Embraer Phenom 300s and Pilatus PC-12s, it flies to convenient airports along the US West Coast and Silicon Valley, with it also gearing up to launch a European operation. Surf Air’s main focus is on regional flying, with the carrier’s average flight time being 1 hour 30 minutes. Its target is business heavy routes, with it now offering up to 28 daily flights between Los Angeles and the Bay Area in northern California. 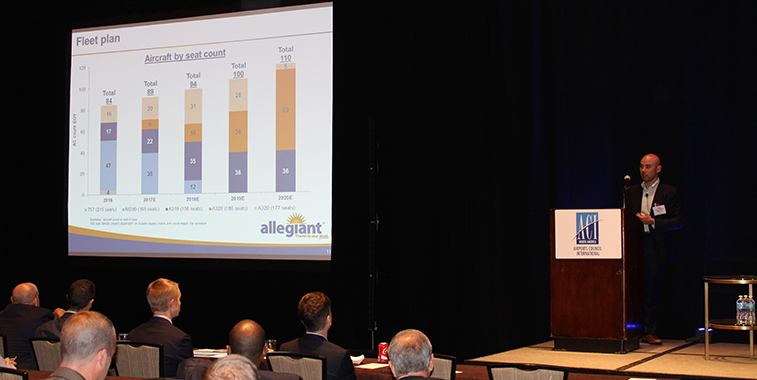 The third Plane Talk Session was Allegiant Air, with the carrier being represented by Lukas Johnson, SVP Commercial. “In the last 12 months we have added Cleveland, Denver, Louisville, New York Newark, Ogdensburg, San Juan and Trenton to our network, showing that we are diversifying the markets that we serve,” commented Johnson during his presentation. While JumpStart was taking place, on the last day the carrier announced that it is going to start serving Providence with operations from Punta Gorda, St. Pete-Clearwater and Cincinnati. “We’re thrilled to announce that we are bringing our unique brand of ultra-low-cost, convenient travel to Providence,” said Johnson of the announcement. “We know that New England travelers are eager to have a convenient, non-stop connection to these great destinations at a fare that everyone can afford.” 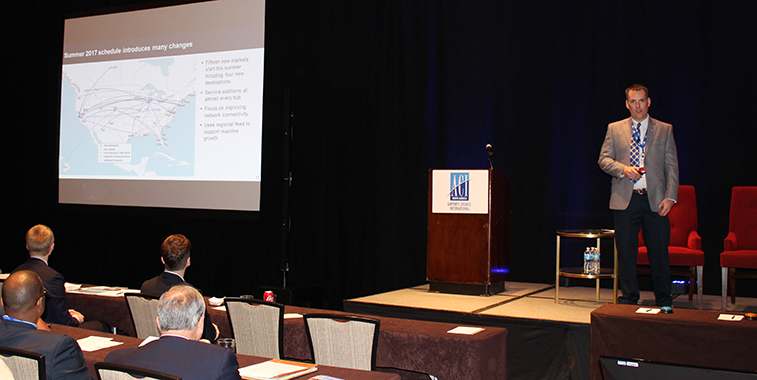 The final Plane Talk Session was presented by Mark Weithofer, Senior Manager, Domestic Network Planning, United Airlines. “The main focus of United’s domestic growth at the moment is about using regional feed to support mainline growth, with the aim of improving network connectivity. We have seen service additions at pretty much every hub with 15 new markets starting this summer, including the addition of four new airports to the United network,” explained Weithofer. 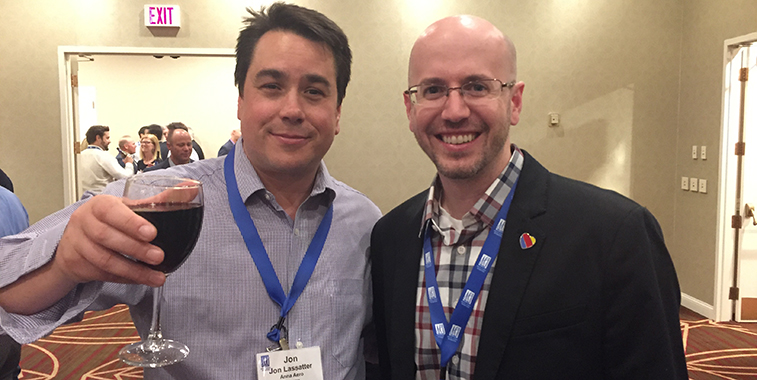 Along with the many presentations and meetings that took place at JumpStart this year, it was also a chance for airports and airlines to network and catch up with each other. Here anna.aero’s Business Development Manager Jon Lassetter grabs a moment to hear about all of Southwest Airlines’ latest route announcements from the carrier’s Senior Manager of Business Development Seth Quillin after a busy day of airline presentations. On Sunday 4 June, the carrier introduced 22 new routes to its network. If you want to know more from the presentations that took place during JumpStart, do so at this link.