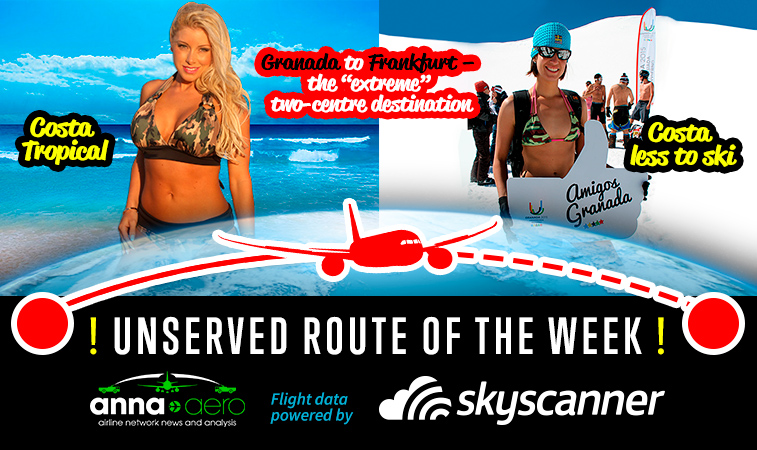 Ski and swim on the same day: Granada’s 3,300m Sierra Nevada mountains are a mere 25km from the airport – yet the beaches of Motril on the Costa Tropical are just 65km to the south. In fact there’s plenty of time to change out of your swimwear…Granada is a no-brainer route for Frankfurt and, for that matter, many European cities.

With nearly 30,000 searches in the last year, a potential city pair from Granada to Frankfurt has been identified as this week’s “Skyscanner-anna.aero Unserved Route of Week” – a powerful analysis based on aspirational data captured from the Skyscanner.net flight comparison site used by +60 million unique visitors per month. “Back in the period of 2006-2008 there were regular services between these two cities, peaking at around 43,000 annual passengers, and we feel that the time is now right for the market to return,” suggests Irene Gracia Lacarra, Head of Airport Marketing, Aena. 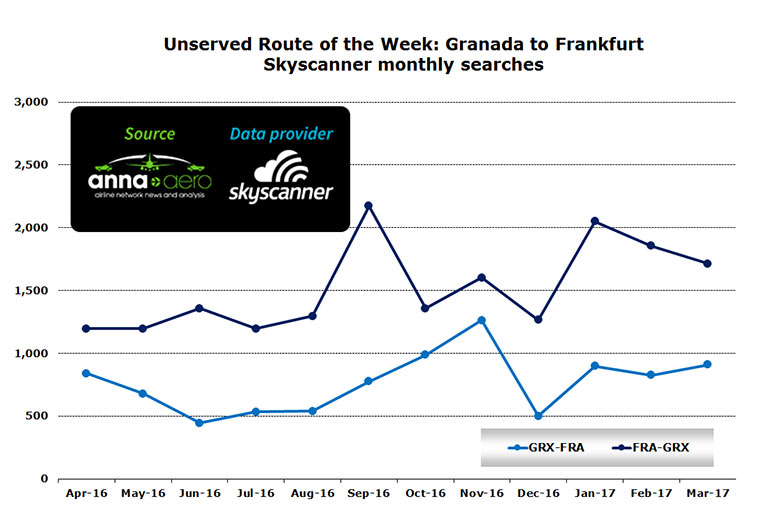 anna.aero to convince Lufthansa to go for this link

Skyscanner demand on this week’s unserved route shows a significant bias towards the Frankfurt end of the city pair, with a 66/34 split, so on this basis we looked at potential carriers at the German end first. Unsurprisingly, Star Alliance carrier Lufthansa is the biggest of the 89 serving carriers at the airport, dominating Germany’s busiest facility with 64% of weekly seats according to OAG data for the week commencing 26 June. The airline currently offers 167 non-stop services from Frankfurt, of which 10 are to Spanish destinations – led in terms of weekly frequency by Barcelona (56), Madrid (28) and Bilbao (21). In total, the German hub has a network of 17 Spanish destinations, just not Granada! Lufthansa clearly has Spain in its sights when it comes to network development, as it has added operations to Alicante (2 April 2016) and Santiago de Compostela (27 March 2017) in the last year or so. On this basis, and hopefully augmented with this Skyscanner data now being made public, Granada will be the next welcome addition in this market segment for Lufthansa.

Frankfurt’s second largest carrier is Condor, former daughter company but still partner of Lufthansa, which holds a 4.9%% share of weekly seats as a result of the 72 short-, medium- and long-haul sectors flown from the airport. The leisure carrier also serves eight Spanish destinations from Frankfurt, two of which are also served by Lufthansa – Palma de Mallorca and Ibiza. However, with perhaps a reasonable component of business and connecting traffic from Granada, it would seem that this unserved route opportunity is presently in the hands of Lufthansa alone at the German end of the potential city pair. “In 2016, 115,000 German tourists visited Granada,” adds Gracia Lacarra. 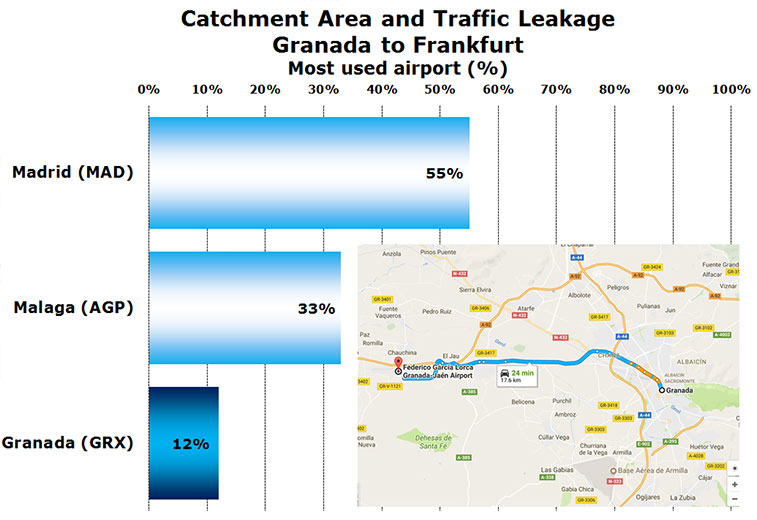 Faical Allou Skyscanner’s Business Development Manager says: “Granada serves just 12% of the traffic from the catchment (50 km around the airport) going to Frankfurt. With better service, such as a non-stop operation, the traffic could grow by a massive 742%.” Note: given the sample size the confidence interval for the share of Granada is +/-6%.

Contemplating the Spanish end of the route, the potential carriers in Granada were considered next. The airport’s capacity is led by Vueling, which holds around 50% of weekly seats. The airline’s current two-destination non-stop route network is a 100% domestic operation, offering a high-frequency connection to Barcelona (26 times weekly), as well as a four times weekly service to Palma de Mallorca. The second largest airline at Granada is fellow IAG-owned airline Iberia with 31% of weekly seats. Again, while it does fly a high-frequency link to Madrid (33 times weekly), that is currently the oneworld carrier’s only service from Granada. On this basis, a new service to Frankfurt from the Spanish end of the airport pair should be considered as unlikely at this point in time, unless a strategic shift in either IAG airlines towards offering international sectors occurs in the near future.

When looking at the previous year of search data, the busiest month for potential traffic flows (for both directions on the route combined) is September 2016, with nearly 3,000 searches, over 1,200 higher than the lowest monthly figure, which was recorded in July 2016 (1,700 searches). The seasonality profile of this search data is significantly less extreme than the last Unserved Route of the Week (Helsinki to Denpasar) with the low-month traffic representing 59% of the highest month. According to OAG Traffic Analyser, because there is no direct service, the top three connecting options chosen by those passengers who did book travel between Granada and Frankfurt in the last year indicates that the majority of connecting travellers used Madrid (95%), Barcelona (2.8%) and London City (1%). Only five different airports were used for connecting traffic in the period being analsyed. “Indirect traffic on the route has grown steadily since 2012, nearly doubling in size in that period,” concludes Gracia Lacarra.

Indeed, an O&D that is not served by a non-stop flight will typically display a low purchase rate and low traffic. In this instance Skyscanner’s Travel Insight indicates a monthly average of 7.1% for the Granada to Frankfurt route (see graph below). Therefore, if there was a Granada to Frankfurt route, and if bookings performed in line with the “Skyscanner market average” for direct services at both airports (8.8%), the airline operating this route could immediately expect an improved purchase rate of 24%, without any increased marketing spend. However, with nearly 30,000 annual searches in the past year, at least a two or three times weekly leisure service should be immediately viable for the airline selecting to start this potential city pair. 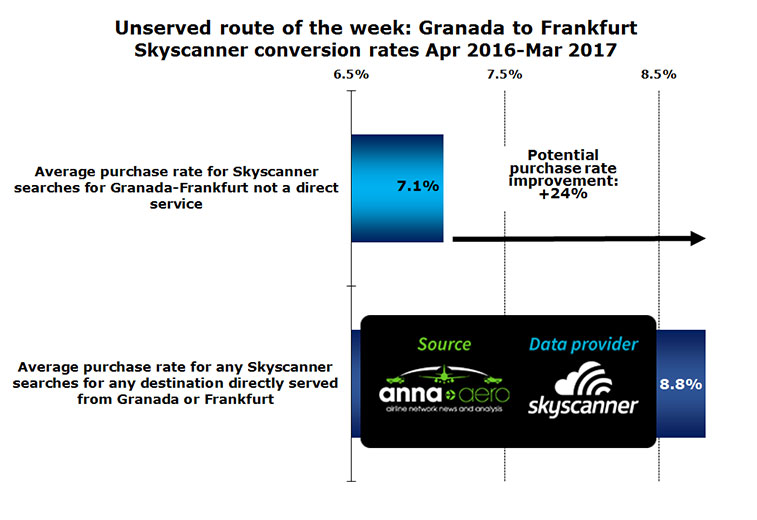