Iceland tops ranking for European countries dominated by local carriers; Lithuania and Slovakia among others with no home carriers 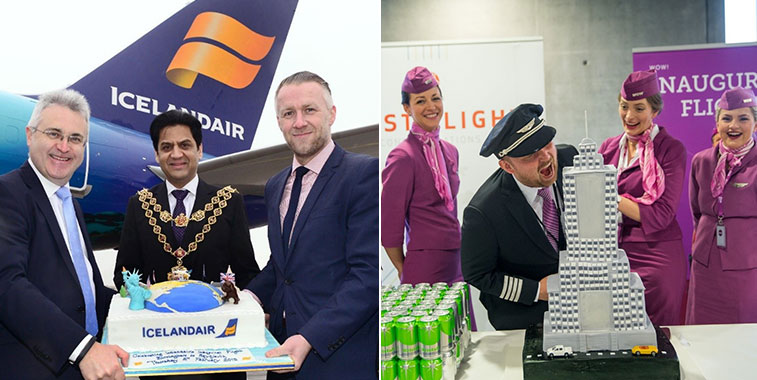 Thanks to Icelandair and WOW air, 80% of seat capacity on international flights from Iceland this summer will be flown on carriers based in the country. This is the highest percentage of any European country, just ahead of Turkey and Ireland. In contrast, some countries like Lithuania and Slovakia don’t have any home grown carriers at present.

With European LCCs setting up more and more bases in countries outside of their registered home country, flag carriers across Europe would appear to be under ever greater threat. This week anna.aero uses the latest S17 schedule data to look at the share of international seat capacity being offered by foreign airlines across 40+ European countries. For this analysis we have made a number of assumptions: SAS is considered to be a home airline in Denmark, Norway and Sweden, but Norwegian is considered only as a Norwegian carrier. Hungary is considered the home of Wizz Air while Volotea’s home is in Spain. easyJet is considered a UK carrier only, even though it has a Swiss-based subsidiary. The two now operate under the same “U2” code so are treated as both belonging to the UK.

UK and Germany have similar 50:50 splits 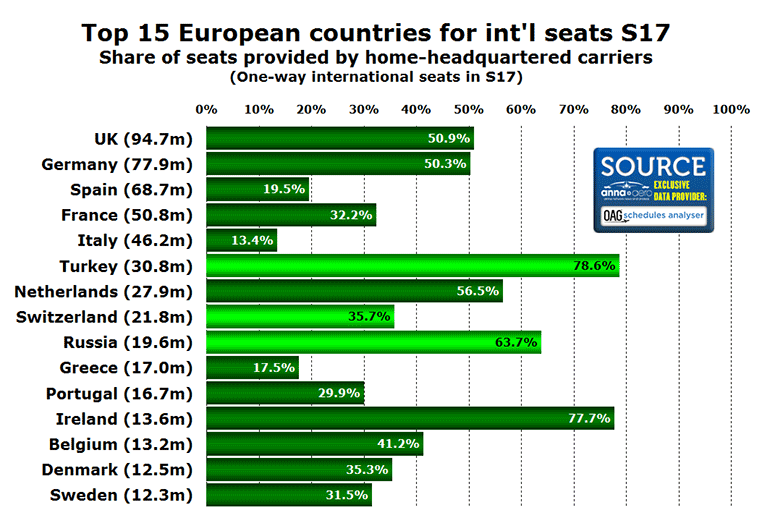 At the other end of the scale Italy is dominated by foreign carriers for international services despite the existence of Air Dolomiti, Alitalia, Blue Panorama, Meridiana and Neos Air. Between them they only account for just over 13% of capacity on international routes. Ryanair and easyJet are both much bigger than Alitalia while Vueling and Wizz Air combined offer as many international seats from Italy as the nation’s flag carrier. Other countries with low shares for home-based carriers in summer are Greece and Spain, arguably the region’s top two leisure destinations.

KLM and Transavia help the Netherlands to maintain over 50% of international capacity on home carriers. Despite Air France’s best efforts and the support of its local version of Transavia, French carriers only account for around one-third of seat capacity on international services from French airports this summer. easyJet, Ryanair and Vueling combined offer almost as many seats as Air France, while Air Algérie, British Airways and Lufthansa are all offering over one million seats this summer from French airports.

If we examine all European countries we find that Iceland tops the rankings for the highest proportion of seat capacity offered by home-based airlines, thanks to Icelandair and WOW air. Between them they account for 80% of international seat capacity in Iceland in S17, with easyJet a very distant third. In these rankings it is noticeable how six of the top seven countries are not members of the EU (shown in bright green). The exception is Ireland, where the presence of both Aer Lingus and, probably more significantly, Ryanair, acts as something of a barrier to entry. British Airways is best of the rest in Ireland with easyJet and Wizz Air both being completely absent from the Irish market. 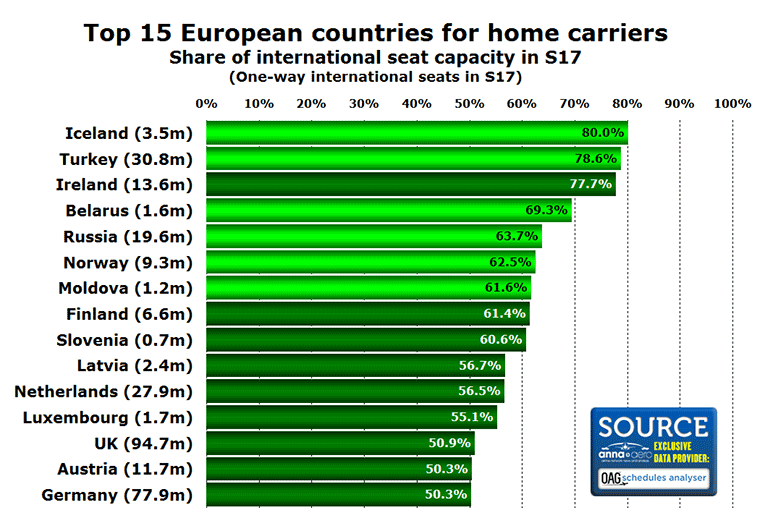 Among other EU nations, Finnair does a good job of being the dominant carrier in Finland, with Norwegian and SAS a long way behind. In the much smaller Slovenian market, Adria Airways grabs just over 60% with Turkish Airlines and easyJet its nearest rivals with around 9% of the market each.

Several states have no home carriers

Several smaller European countries do not have any home-based scheduled carriers. The demise of Air Lituanica in May 2015 has left Lithuania without a home airline. After Estonian Air ceased operations in November 2015 it was replaced by Nordica. However, since last November this airline has been using LOT Polish Airlines aircraft and flight codes and so is not considered by anna.aero to be an Estonian-based carrier. Following SkyEurope’s failure in 2009 Slovakia has been without a national carrier. Ryanair, SmartWings and Wizz Air are the country’s biggest airlines for international service.

Two other countries lacking a home-based airline are Macedonia and Bosnia & Herzegovina. In a curious coincidence Wizz Air is the leading airline in both markets, while Turkish Airlines and Austrian Airlines are second and third respectively in both countries. Wizz Air has been serving Skopje since June 2011 and made the airport a base in October 2012. This summer it serves 24 destinations from the Macedonian capital. Tuzla in Bosnia & Herzegovina became a Wizz Air base in June 2015. This summer it is basing two aircraft at the airport and offering flights to 16 destinations. Wizz Air flights to Sarajevo only began earlier this year with twice-weekly flights to Budapest. 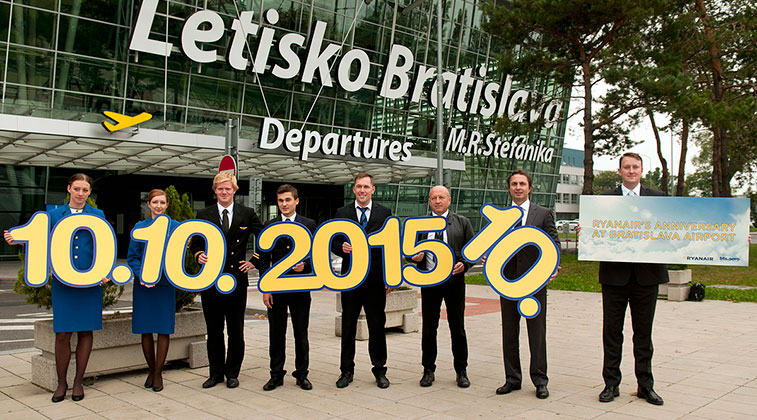 Ryanair celebrated 10 years of operations from Bratislava in October 2015. Since the demise of SkyEurope in 2009 the Irish ULCC has been the biggest carrier in Slovakia with around 40% of seat capacity in S17. Its nearest rivals SmartWings and Wizz Air have about 20% each.