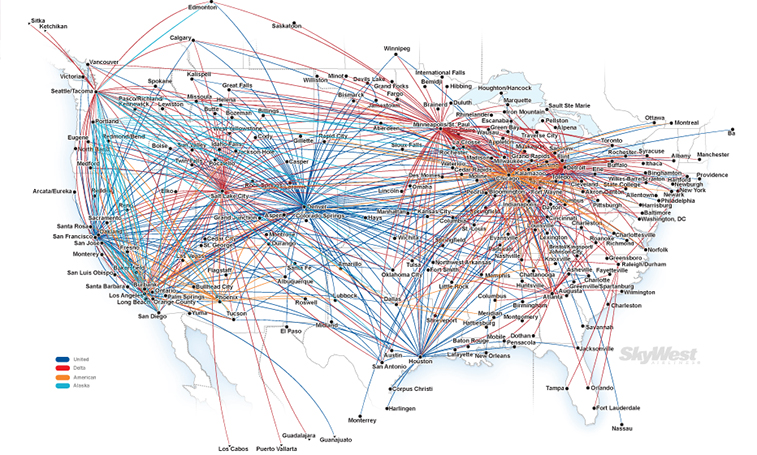 SkyWest Airlines operates for Alaska Airlines, American Airlines, Delta Air Lines and United Airlines. Looking at OAG schedules for w/c 20 June the carrier is present at over 230 airports in North America. Last year the airline carried 31.2 million passengers, up 3.7% when compared to 2015, a year which saw the airline break the 30 million passenger milestone for the first time. According to the airline’s website, it operates a fleet of nearly 400 aircraft.

SkyWest Airlines was founded on 26 April 1972 when Ralph Atkin purchased Dixie Airlines. Now the carrier has grown to become one of the US’ leading operators. SkyWest serves as a feeder carrier, operating under contract with various major airlines. It flies as SkyWest in a partnership with Alaska Airlines, as United Express on behalf of United Airlines, as American Eagle on behalf of American Airlines, and as Delta Connection on behalf of Delta Air Lines. According to its website. SkyWest has a fleet of 399 aircraft, made-up of: 101 E175s; 36 CRJ 900s; 85 CRJ 700s; and 177 CRJ 200s.

In 2016 SkyWest welcomed over 31 million passengers, up 3.7% when compared to 2015, a year which saw the airline break the 30 million milestone for the first time. Since 2007 the airline’s passenger count has increased 41% from the 22 million that it carried 10 years ago. According to statistics published by the Bureau of Transportation Statistics, only one year in the past decade saw SkyWest passenger numbers decline, with traffic falling 6.3% between 2007 and 2008. 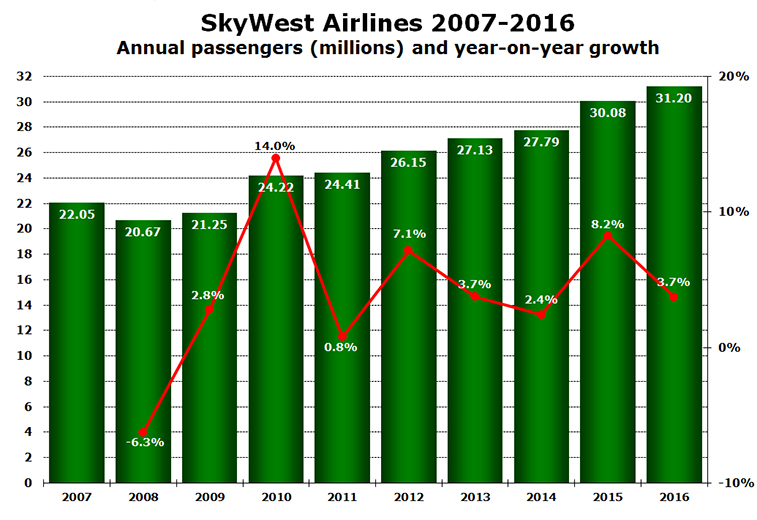 Of the 31 million passengers that flew SkyWest in 2016, 2.10 million used the carrier on international services, around 6.7% of its total traffic. In 2007 the airline carried 1.08 million international passengers, which equals to 4.9% of traffic that year. While the international market share of traffic has increased during the past decade by two points, it should be noted that between 2015 and 2016 traffic in the market dropped by 6.2% from 2.24 million passengers, signifying a shift in capacity to focus on US domestic services.

Chicago O’Hare is SkyWest’s leading hub, with it occupying close to 12% of the carrier’s weekly seat capacity in S17. It should be noted that in 2013 O’Hare was only SkyWest’s fifth largest airport, with it at the time having just a 5.2% share of capacity. That year Los Angeles was the airline’s leading hub (now sixth), with it having a 9.4% share of capacity. According to its website, the carrier’s other hubs include: Salt Lake City (second largest airport operation; 6.1% of weekly seat capacity); Denver (third; 6.0% ); San Francisco (fourth; 4.8%); Detroit (fifth; 4.7%); Los Angeles (sixth; 4.3%); Minneapolis-St.Paul (seventh; 4.3%); Seattle-Tacoma (eighth; 3.5%); Phoenix (ninth; 2.2%); Portland (12th; 1.5%); and Houston Intercontinental (13th; 1.4%). In total SkyWest is serving 237 airports this summer according to OAG schedules, of which 15 are international (nine in Canada and five in Mexico). 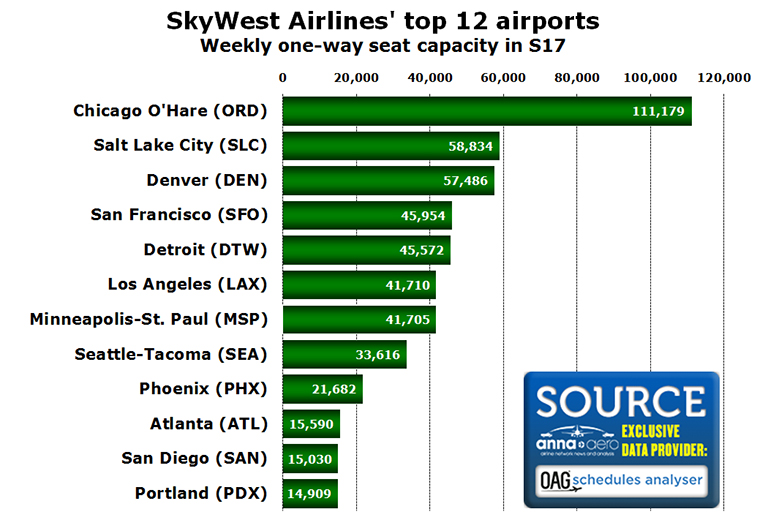 Top 12 SkyWest Airlines routes account for only 4.8% of capacity

SkyWest’s leading route is between its Detroit and Chicago O’Hare hubs, with it operating nearly 6,000 weekly one-way seats on the airport pair. SkyWest is the leading carrier, with it handling 47% of seats on the sector. Following SkyWest is Delta, with it occupying 20% of seats, with American third with 13%. The remaining 20% is made-up by four carriers, namely: Republic Airlines (8.8% of seats – on behalf of United); United (7.6%); GoJet Airlines (2.8% – Delta) and Envoy Air (0.6% – American). SkyWest’s top 12 routes only account for 4.8% of the carrier’s weekly seat capacity, with OAG schedules indicating that the airline is operating over 560 routes this summer. 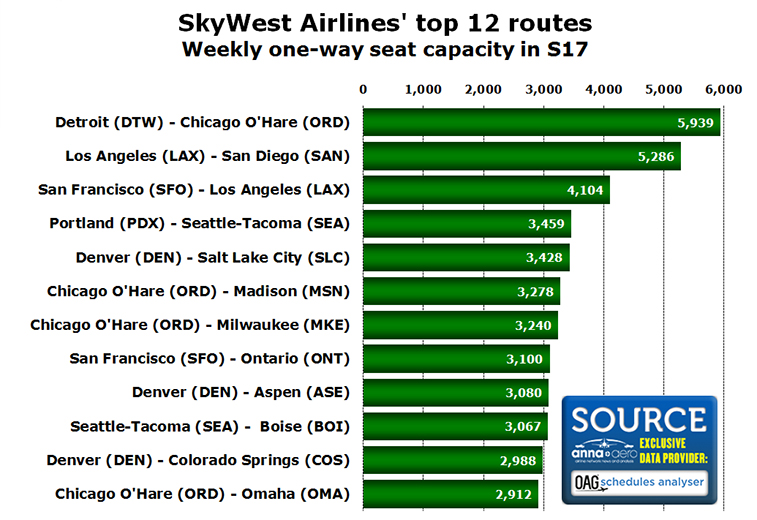 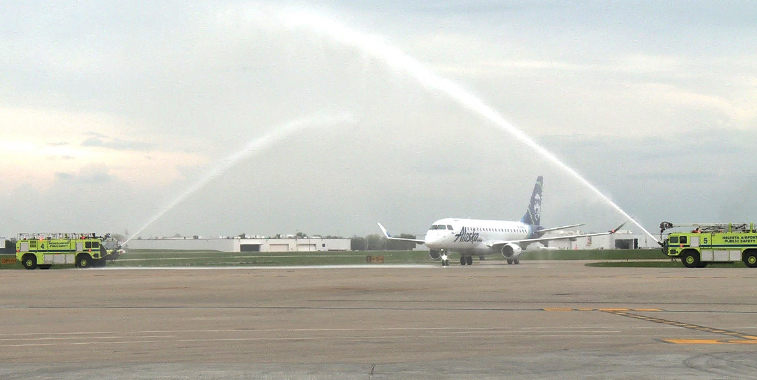 One of the most recent launches of SkyWest Airlines was on 13 April, the day in which it began flying between Seattle-Tacoma and Wichita in partnership with Alaska Airlines. Seattle-Tacoma is SkyWest’s eighth largest airport operation with 3.8% of seat capacity, with around 33,600 weekly one-way seats on offer from the Washington airport.