Malaga Airport could hit 19 million passengers in 2017 if growth continues; Ryanair leading carrier as it sets sights on four million 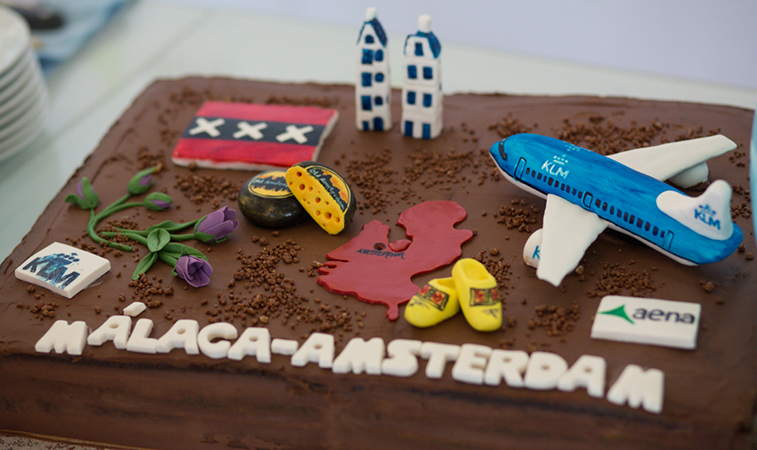 KLM arrived in Malaga on 1 April with weekly flights from Amsterdam. Since the launch, it has grew its Malaga schedule to seven weekly flights, with two flights on Saturdays and no Sunday rotation. The route was also started by Ryanair this year, the Spanish airport’s largest carrier. No doubt a factor for both airlines starting the route is due to its impressive growth, with easyJet, Transavia and Vueling combined seeing a 41% rise in traffic on the city pairing in 2016.

Nestled in southern Spain, Malaga is the nation’s fourth largest airport. Predominantly a leisure destination, Malaga handled close to 16.7 million passengers last year, a rise of nearly 16% when compared to 2015. With Spanish airports welcoming over 230 million passengers in 2016, it means that 7.2% of the nation’s traffic passed through Malaga. Sitting ahead of this Mediterranean hot-spot in the rankings are Madrid (50.4 million passengers in 2016), Barcelona (44.2 million) and Palma de Mallorca (26.3 million). While Malaga is not the biggest of these four airports, it is the fastest-growing of the quartet. Madrid witnessed traffic climb by 7.7% in 2016, with Barcelona and Palma de Mallorca both growing by around 11% respectively in 2016.

Between January and May this year, Malaga processed just under 6.49 million passengers, up 14% when compared to the same five-month period of 2015. Traffic has grown in every month of the year, with January (up 18%), February (15%), March (9.4%), April (17%) and May (11%) all seeing respectable increases. With the airport welcoming a little below 16.7 million passengers in 2016, if trends so far seen this year continue throughout the next seven months, then Malaga should witness just over 19 million passengers in 2017. 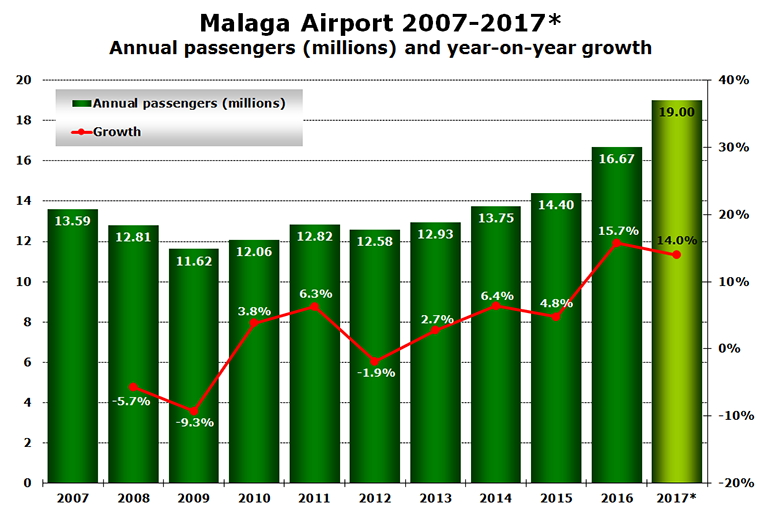 Last year, domestic traffic from Malaga accounted for close to 14% of the market, with 2.29 million passengers using Spanish services in 2016. Traffic in the domestic sector grew by 12% last year, with it rising from 2.04 million passengers in 2015, a year when the sector had a share of just over 12% of all passengers. Overall between 2015 and 2016 the domestic sector achieved a 1.5 percentage point gain of Malaga’s total traffic.

If we take Malaga’s monthly passenger statistics and place them in anna.aero’s Seasonal Variation in Demand calculator (SVID), the airport achieves a score of 12.09 – a “Poor” rating. In 2015 the airport achieved a score of 13.12, also poor, while in 2014 it recorded 14.10, which is again poor. So while Malaga’s seasonality is clearly evident, the growth that the airport is encountering is being spread throughout the year and not just in peak summer, meaning that Malaga’s traffic seasonality profile is steadily becoming flatter.

Ryanair is Malaga’s leading airline, with Europe’s largest carrier carrying 3.83 million passengers from the Spanish airport in 2016, up nearly 27% on the year before. The result means that the ULCC has a 23% market share of Malaga’s traffic. In second place is easyJet, with it having a 11% share of passengers, followed by Vueling (11% share) and Norwegian (7.1%). In total, the top 12 airlines accounted for 76% of the airport’s total traffic in 2016.

For the first five months of this year, Ryanair has carried 1.53 million passengers from Malaga, up 19% on the same period of last year. While its monthly growth rate has declined from 45% in January (winter capacity growth) to 8.9% in May, Ryanair will easily pass the four million passenger barrier from Malaga in 2017. This summer it is operating 55 routes from Malaga, with Dublin, London Stansted and East Midlands being its top three connections. 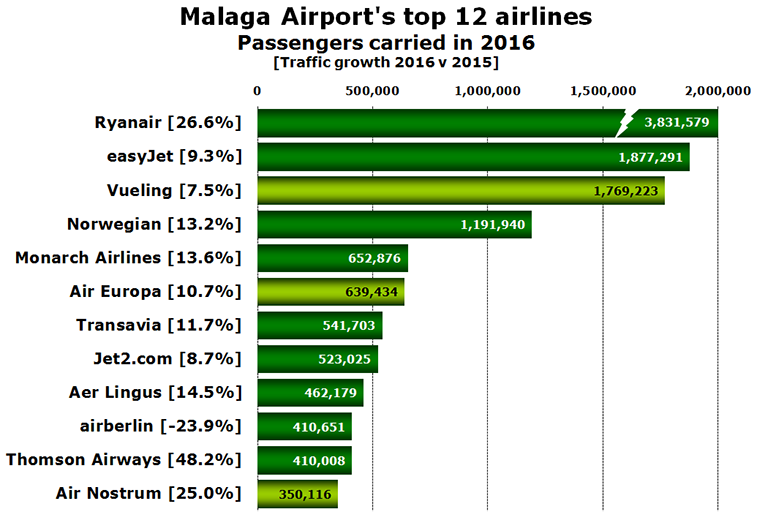 Only three of Malaga’s top 12 airlines are Spanish (highlighted in light green), with the leading home airline being Vueling (third largest operator), with it seeing its traffic grow 7.5% last year. Looking at OAG schedules for w/c 27 June, Vueling is operating 24 routes from Malaga this summer, including Amsterdam, Copenhagen and Birmingham, three of the airport’s fastest-growing top 12 routes (more detail below).

While Ryanair is the leading airline from Malaga, it does not serve the airport’s leading route – London Gatwick – with the airport pair hosting close to 1.18 million passengers in 2016, up 9.9% when compared to 2015. Of the airport’s top 12 routes, only one (highlighted in red) is domestic, with Barcelona seeing a respectable 13% increase in traffic during 2016. Four of Malaga’s top 12 routes (highlighted in light green) welcomed passenger growth of over 20% last year, with Manchester (25% growth), Amsterdam (41%), Copenhagen (37%) and Birmingham (30%) being the best performing routes for traffic gains in 2016. 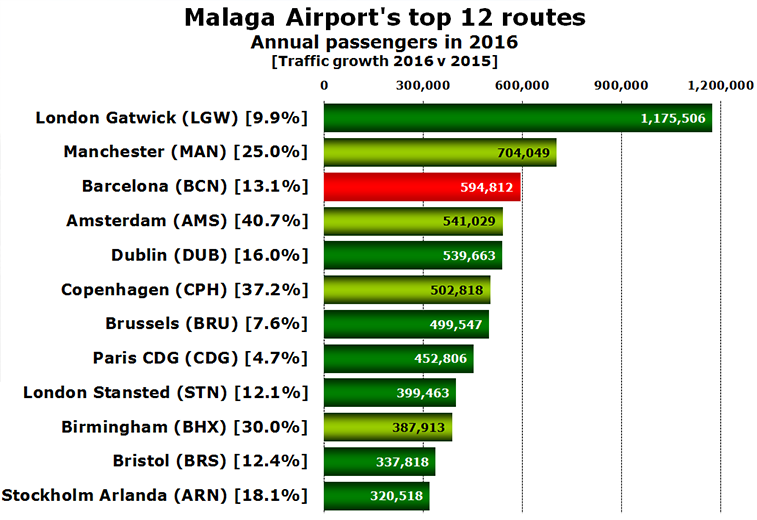 In total this summer Malaga is connected to 138 destinations, of which two are in North America (Montreal and New York JFK) and five are in Africa (Algiers, Casablanca, Melilla, Tangiers and Tindouf). Looking ahead to route launches coming up later this year, Ryanair will continue its expansion from Malaga by adding Prague on 29 October, while SAS will begin services to Helsinki on 4 November. The Star Alliance member will also serve new summer seasonal routes to Aarhus and Kristiansand from the beginning of July. 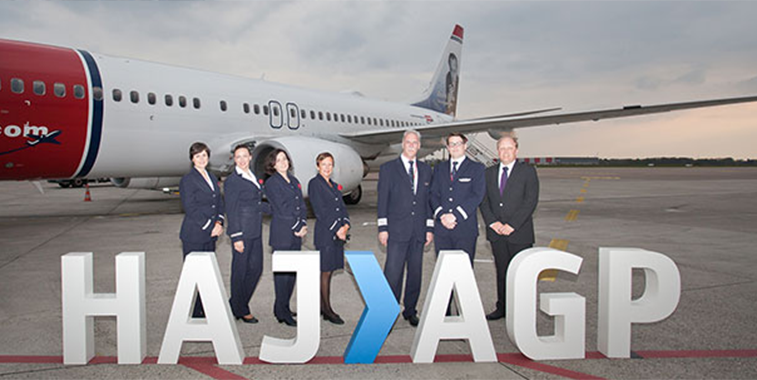 Norwegian is Malaga’s fourth largest carrier. One of the its most recent route launches from the Spanish airport was to Hannover. Last year the carrier’s traffic from Malaga grew by 13% to 1.2 million passengers.