Brisbane-Delhi is “Skyscanner Unserved Route of the Week” ‒ over 215,000 searches; Air India’s next Aussie adventure?? 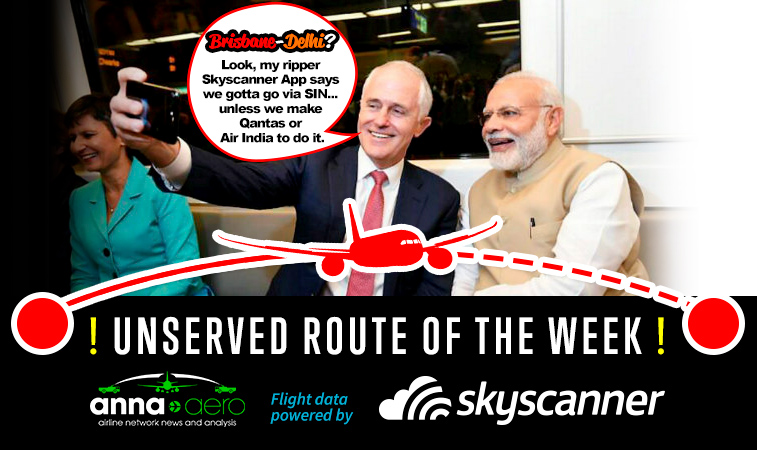 Until Qantas or Air India decides to take the plunge and start a new service between Brisbane and Delhi, Australian Prime Minister Malcolm Turnbull and Indian Prime Minister Narendra Modi will have to settle for using the Delhi metro. The city pair is the Australian airport’s biggest underserved market, overtaking Phuket in the last year.

With over 215,000 searches in the last 12 months, a potential city pair from Brisbane to Delhi has been identified as this week’s “Skyscanner-anna.aero Unserved Route of Week” – a powerful analysis based on aspirational data captured from the Skyscanner.net flight comparison site used by +60 million unique visitors per month. “The overall India-Brisbane and India-Queensland market is growing quickly,” says Jim Parashos, Head of Aviation Business Development, Brisbane Airport. “Brisbane-Delhi overtook Brisbane-Phuket as the largest unserved market this year, with over 60,000 passengers.” 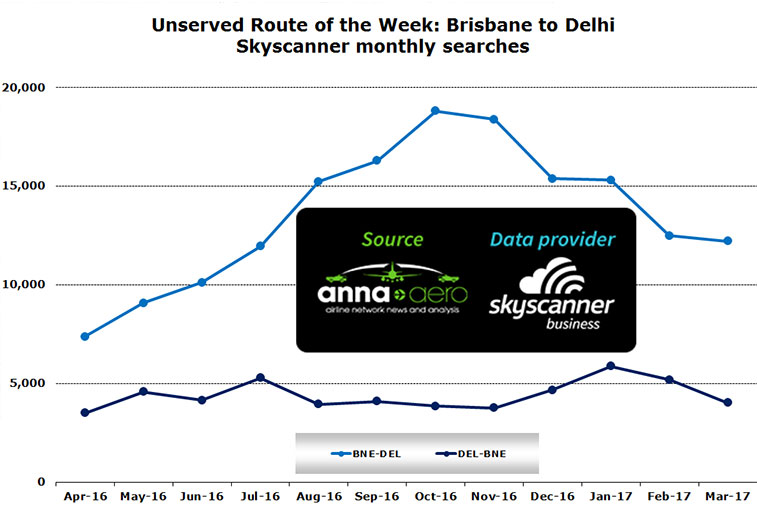 anna.aero advises Qantas or Air India to add this link

Skyscanner demand on this week’s unserved route shows a significant bias towards the Brisbane end of the city pair, with a 75/25 split, so on this basis we looked at potential carriers at the Australian end first. Flag carrier Qantas is the biggest carrier at the airport, although it far from dominates the capital city of Queensland facility with 35% of weekly seats according to OAG data for the week commencing 26 June, with the typical four-way split of capacity between it, Virgin Australian Airlines and their daughter LCCs of Jetstar Airways and Tigerair Australia. Qantas currently offers 37 non-stop services from Brisbane, of which nine are to international destinations, including some also in Asia – namely Hong Kong, Singapore and Tokyo Narita. At 7,142 kilometres, the carrier’s daily service to the Japanese capital is significantly shorter than the potential +10,000-kilometre sector to Delhi, but with based A330-200s and 300s in Brisbane, Qantas clearly has the operational capability to start the route. Having consulted anna.aero’s new route database, the airline has added several international sectors from Brisbane in the past couple of years (Narita, August 2015; Christchurch and Wellington, December 2015; and Port Moresby, October 2016), so the airline clearly has overseas development on its radar, and hopefully with this Skyscanner data now being made public, Delhi could be its next welcome addition.

Brisbane’s second largest carrier is Virgin Australia, which holds a 32% share of weekly seats as a result of its 24 domestic and 12 international sectors. Unlike its nemesis however, its overseas network is confined to primarily regional destinations, with Los Angeles being the only exception. On this evidence, a sector to Delhi for the #2 carrier might be a network jump too far for Virgin Australia at this stage, so instead we look to the third largest airline at the airport, which is Jetstar Airways (12% share). The Qantas in-house LCC is again a non-starter however, as its international network from Brisbane is limited to regional services at this time, with the fourth largest carrier – Tigerair Australia – presently offering a domestic-only operation. So it would seem that this unserved route opportunity is presently in the hands of Qantas alone at the Australian end of the potential city pair. 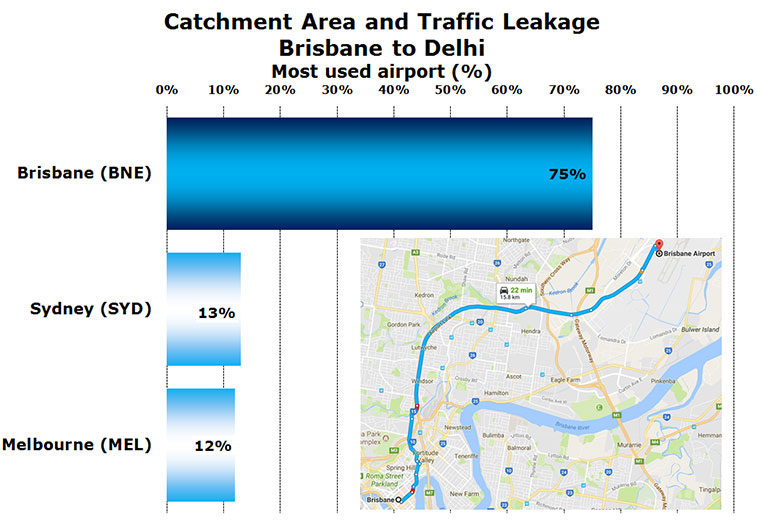 Faical Allou Skyscanner’s Business Development Manager says: “Brisbane serves 74% of the traffic from the catchment (100 km around the airport) going to Delhi. With better service, such as a non-stop operation, the traffic could grow by 35%.” Note: given the sample size the confidence interval for the share of Brisbane is +/-1%.

Considering the Indian end of the route, the potential carriers in Delhi were contemplated next. The airport’s capacity is led by LCC IndiGo, which with is 195,000 weekly seats controls around 26% of capacity. The airline’s current 34-destination non-stop route network only has a small international proportion (just 6,300 weekly seats), with only three international city pairs – to Dubai, Doha and Kathmandu. By contrast, Delhi’s second largest carrier, Air India (18.7% or 19.2% of weekly seats if Air India Express’ capacity is included), has a robust international network of 28 destinations from the 64 offered non-stop from the Indian capital city. Indeed, the Star Alliance carrier is also the only operator between the Indian and Australian markets, with its four times weekly Sydney route, as well as a three times weekly sector to Melbourne. These Australian cities were originally linked to Delhi as a triangular operation, so perhaps a new service to Brisbane could be inaugurated in this way too, with a partner airport in the region – perhaps Perth, Adelaide or Auckland?

When looking at the previous year of search data, the busiest month for potential traffic flows (for both directions on the route combined) is October 2016, with nearly 23,000 searches, nearly 12,000 higher than the lowest monthly figure, which was recorded in April 2016 (11,000 searches). The seasonality profile of this search data is more extreme than the last Unserved Route of the Week (Granada to Frankfurt) with the low-month traffic representing 48% of the highest month. According to OAG Traffic Analyser, because there is no direct service, the top three connecting options chosen by those passengers who did book travel between Brisbane and Delhi in the last year indicates that the majority of connecting travellers used Singapore (60%), Bangkok Suvarnabhumi (13.9%) and Guangzhou (13.6%). Looking at the traffic flows in the opposite direction, originating in India this time, the same three airports, and in the same order, have controlled the connecting market over the last year.

“Singapore Airlines holds a significant share [over 40%] of transfer traffic,” adds Parashos. “The decision to split the Bangkok-Brisbane schedule by Thai Airways in October 2016 has reaped rewards, with the airline now holding the second highest share. Interestingly, China Southern holds the third highest share of 12% [Source: Airport IS].” He continues: “We are looking at other options to increase capacity on Brisbane-Delhi.  While non-stop services are a high priority, we are also looking at options to increase capacity and connectivity via the major Asian hubs with key partners.”

With a lack of direct services, travellers between these two cities have clearly got used to these one-stop alternatives. However, the market demand is extremely buoyant – as the graph below shows, with 11.8% of the Skyscanner searches for these indirect Brisbane to Delhi services converted into ticket sales – that’s more than the average 10.3% achieved for Skyscanner conversion/purchase rates for all direct routes available from either Brisbane or Delhi. However, with over 215,000 annual searches a three or four times weekly service, perhaps as a suggested initial triangular route, should be immediately viable for the airline selecting to start this potential city pair. “Travel between India and Brisbane is built on VFR [42% of total two-way travel]. In the 2011 Census, 22,100 Brisbane residents were born in India, making it the third largest ethnic community in the city,” concludes Parashos. 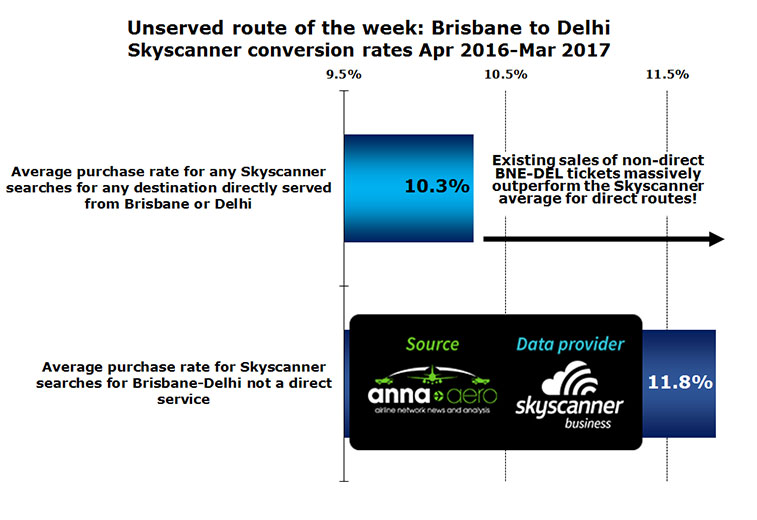