Europe-Asia long-haul capacity up 6% this year; UK and China lead way for most seats as Aeroflot overtakes Lufthansa as #1 airline 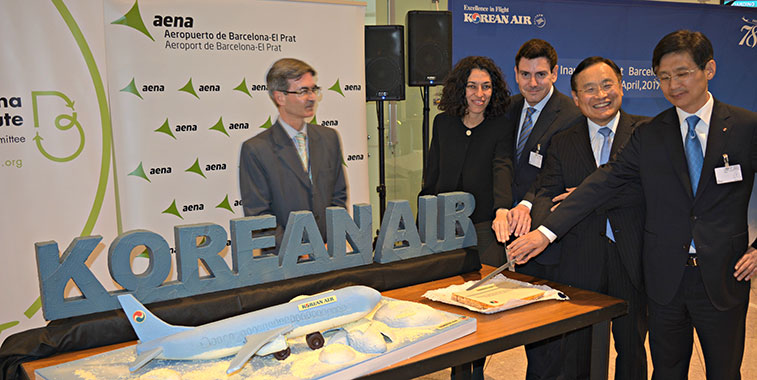 This year scheduled seat capacity on long-haul routes (those greater than 4,000 kilometres) between Europe and Asia is set to grow by an estimated 6%, based on anna.aero’s analysis of current OAG schedule data. This is an improvement on the 2% growth seen in both 2016 and 2015 respectively. Looking at monthly capacity data for the period from 2014 to 2017, the first dip occurs in November 2015, at the start of the W15/16 season. This also coincided with the terrorist attacks in Paris on 13 November which definitely had an impact on traffic between Asia and Paris, as confirmed by ADP’s traffic statistics for the year, which showed that Asian traffic to/from Paris was down almost 7% across all of 2016. In the first half of 2016 seat capacity was up just 0.2% but recovered to register 3.5% growth in the second half of the year. 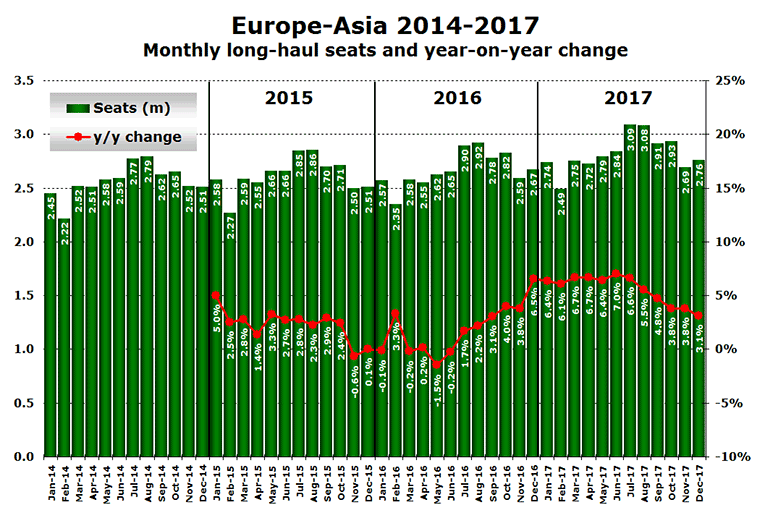 For the first seven months of 2017 seat capacity between Europe and Asia is up between 6% and 7% in every month, before trailing off slightly towards the end of the year. However, airlines are still tweaking their schedules for the start of the W17/18 season.

Unlike studying other inter-regional flows (such as Europe to North America, or Asia to North America) there is no major ocean between Europe and Asia. In fact, it is interesting to note that Russian airports are present in both regions. As a result there are some quite short domestic or even regional routes which are between Europe and Asia. However, for the purposes of this analysis we are interested in long-haul routes between the continents, so we have excluded all routes of under 4,000 kilometres.

Despite this, the leading airline in terms of long-haul seat capacity between the two regions this summer is Aeroflot, overtaking last summer’s champion Lufthansa. Six of the top seven airlines are based in Europe with Air China being the notable exception. However, after the top seven, six of the next seven airlines are based in Asia, with Finnair being the exception this time. Asian carriers are represented by the bright green bars on the following graph. 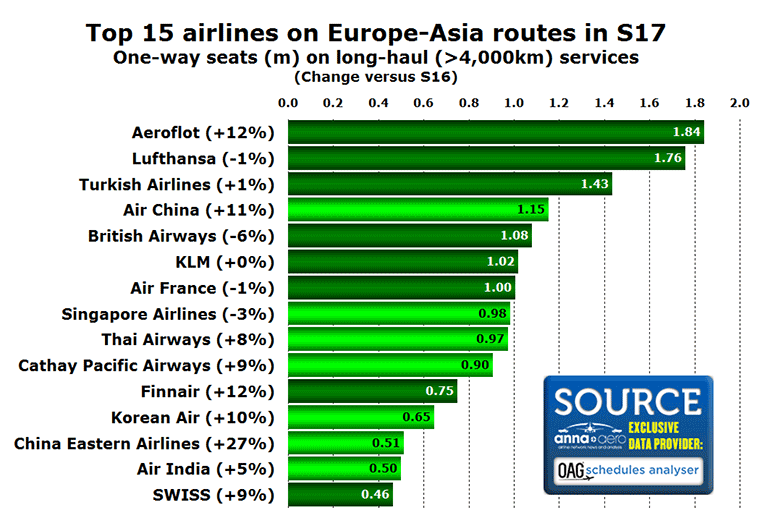 Despite overall growth of around 6%, four of the top 15 airlines are showing a small reduction in capacity this summer; Air France and Lufthansa (both down 1%), Singapore Airlines (down 3%) and British Airways (down 6%). How much of the British flag carrier’s fall in capacity is a response to a possible slowdown in bookings from Asia as a result of the recent terrorist attacks in the UK is unclear.

While Korean Air, Air China, Aeroflot and Finnair are all reporting solid double-digit growth, the star performer is China Eastern Airlines which has grown its capacity by more than a quarter since last summer. This has enabled it to jump from 16th to 13th among airlines serving the market. Dropping out of the top 15 to make way for the SkyTeam carrier is India’s Jet Airways, which falls to 16th.

UK #1 for Asian capacity while Spain sees doubling of seats

Looking at the European end of the market, the top 10 country markets for long-haul routes to Asia have remained unchanged and in the same order. However, two markets have shown a year-on-year decline in capacity (highlighted in red). In the top 10, Finland (+11%) and Russia (+17%) have reported double-digit growth. Just outside the top 10, in 11th place, Spain has seen an almost doubling of seat capacity since last summer. This has been helped considerably by new routes to Barcelona from Hong Kong (Cathay Pacific Airways – starting 2 July), Seoul Incheon (Korean Air) and Shanghai Pudong (Air China) as well as Air India’s Delhi to Madrid service which launched last December. Brussels Airlines’ decision to launch flights to Mumbai from Brussels has contributed significantly to the almost 50% growth in the Belgian market. 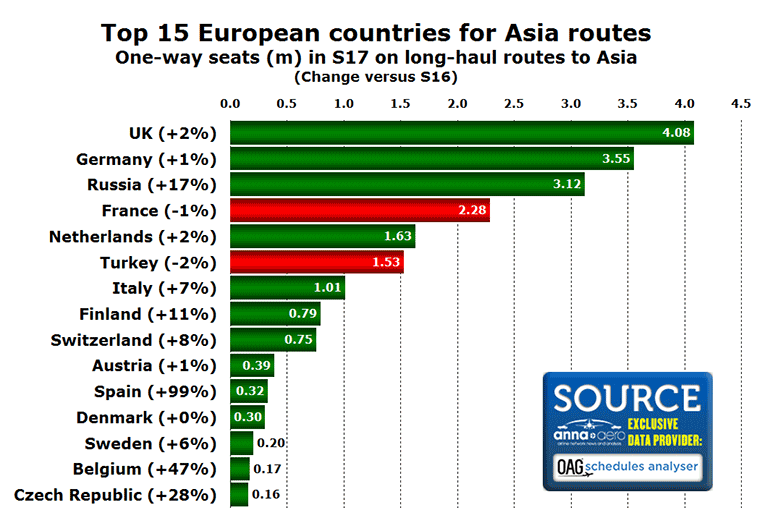 China way out in front while Taiwan sees 20% growth

In Asia only Malaysia (down 7%) and Japan (down 3%) have seen a reduction in European capacity this summer. These countries are shown in red on the graph. China is more than twice as big as the next biggest country in Asia – India. Thailand has overtaken Japan for third place, while Asian Russia and Vietnam (both +13%) and Taiwan (+20%) are the fastest-growing major markets. 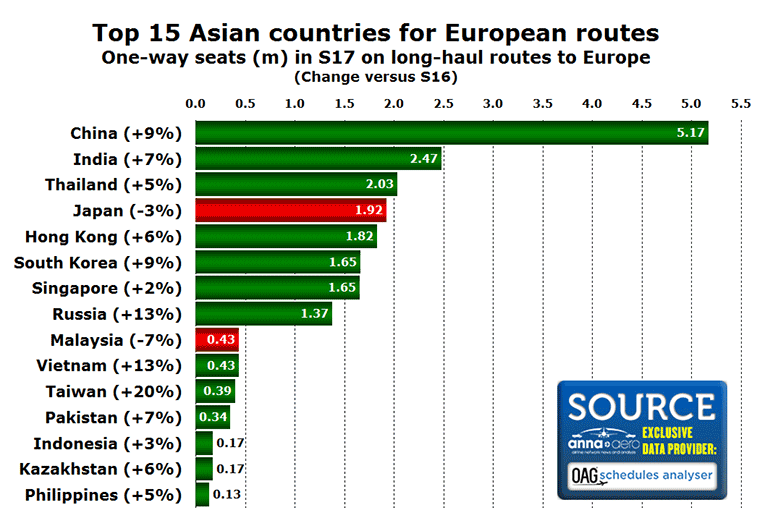 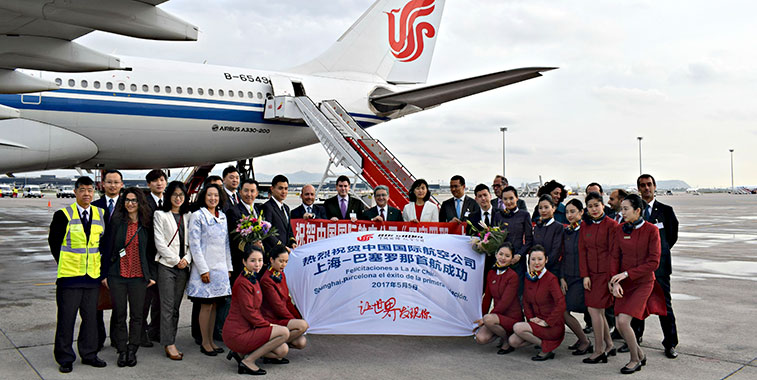 Air China was another carrier to launch new services to Spain from Asia this year. On 5 May the Star Alliance carrier began connecting Shanghai Pudong with Barcelona three times weekly using its A330-200s. Air China is the biggest Asian carrier in terms of long-haul seats between Europe and Asia, but ranks only fourth overall behind Aeroflot, Lufthansa and Turkish Airlines.