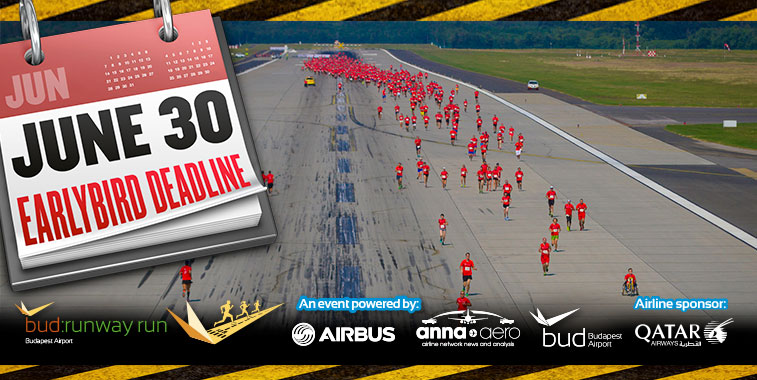 Friday is the last day to get the low price for the Budapest Airport-anna.aero Runway Run, sponsored by Airbus and Qatar Airways – its €30 today but goes up to €50 on 1 July. All entry fees are entirely donated to international child cancer charities and other good causes.

Friday is the last day to get the lowest possible price for the Budapest Airport-anna.aero Runway Run – it’s currently €30, but goes up to €50 on Saturday. Of course we’ll be delighted to take the extra money from you as all entry fees are entirely donated to international child cancer causes and a Hungarian charity assisting with the inclusion of handicapped people in sports.

Meanwhile, confirming its support as main airline sponsor for a second year, Qatar Airways has signed up alongside Airbus as recognition grows for the must-be-at aviation charity-sporting event of the year.

Without our devoted sponsors and advocates, the Budapest Airport-anna.aero Runway Run couldn’t go ahead and we thank you, the charities thank you: The leading sporting-charity event for the global aviation industry attracted 976 air transport industry runners last year. For the fifth consecutive year, Budapest Airport will close one of its two runways for four hours so runners drawn from airlines, airports and enterprises across the aviation community can once again compete for a series of anna.aero-Budapest Airport “Golden Cake Trophies”.

A reminder of the details…