This week in Dublin: anna.aero Publisher Paul Hogan welcomes Michael O’Leary to Future Travel Experience Europe, a sister business unit to anna.aero. Ryanair was the Headline Partner of Future Travel Experience Europe & Ancillary, where the Ryanair CEO gave a keynote presentation on the strategic goals of Year 4 of the Always Getting Better programme for which “Connecting Flights (Ryanair, then others)” is listed as the number-one priority. The whole presentation is available here.

Milan Bergamo is Ryanair’s largest mainland European base, with it accounting for 4.0% of the carrier’s weekly one-way seat capacity in S17. To put this into perspective, London Stansted has 7.9% of weekly one-way seats and has Dublin 5.1% respectively. On 21 June the carrier announced that Bergamo would become its second hub to offer connecting flights, following in the footsteps of Rome Fiumicino, the carrier’s 17th largest airport operation in S17, with the Italian capital airport handling 1.3% of ULCC’s weekly seat capacity.

A brief of Ryanair at Bergamo

anna.aero has been informed that 9.2 million passengers travelled on Ryanair from Bergamo in 2016, with its average load factor being 90% for the entire year across all routes. Now looking at Ryanair’s annual seat capacity for 2017 so far (winter changes could still be made), it is currently showing to be up 8.5% to over 11.3 million annual seats. Now if the carrier is able to maintain its 90% load factor for 2017 from Bergamo, that means the carrier will handle over 10.1 million passengers from the Italian airport this year. While this is very positive for the airline and indeed the airport, breaking the 10 million annual passenger milestone, it still means that there will be a surplus of one million unsold seats from the airport, so hopefully the carrier will be able to attract a fair amount of connecting passengers via Bergamo to fill the unused capacity.

At the start of this venture from Bergamo, Ryanair will offer connection options to passengers travelling between Alicante, Athens, Barcelona, Bari, Brindisi, Cagliari, Catania, Corfu, Ibiza, Lanzarote, Lamezia Terme, Madrid, Malaga, Malta, Naples, Palermo, Pescara, Trapani, Valencia and Zaragoza. Looking at the press release sent out by the airline, it states that the new connection options will open up to 300 new routes via Bergamo, however an analysis by anna.aero reveals that it will actually only open up 200 new booking options for passengers via the Italian city during the initial phase of the operation. Of these 200 routes, 65 are ‘illogical’ domestic connections, i.e Alicante – Bergamo – Barcelona. As part of this analysis, we have excluded all domestic-domestic connections, due to the unrealistic option of passengers taking such a route, and because of the geographical position of Milan. However, that does not mean that someone would not take that routing, if the price was right. 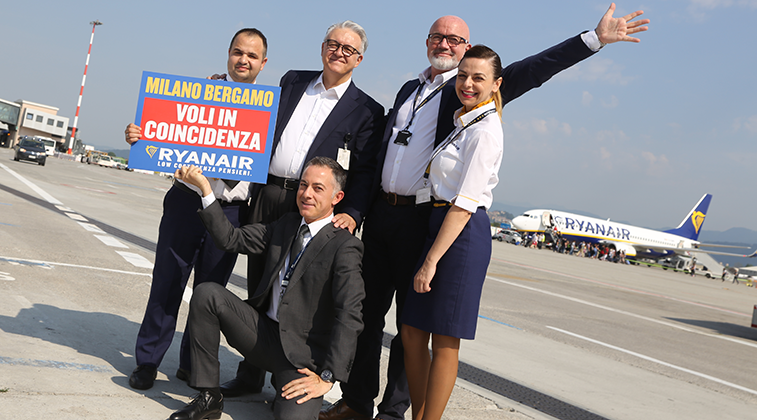 Of the remaining 135 routes left after excluding domestic-domestic connections, 33 sectors already have direct flights between them this summer. However, even with direct flights, an analysis of OAG Traffic Analyser data reveals that a significant proportion of these services still see a strong level of indirect traffic, so Ryanair can take advantage of this. Of those 33 routes that have direct flights, Ryanair already serves 13 of them. They are:

So by removing these 13 routes from the remaining 135 non-domestic routes opened up by Ryanair via Bergamo, only 122 are new connecting options for the carrier.

Athens and Madrid to lead the connection charge

anna.aero has conducted an extensive analysis of OAG Traffic Analyser data for each of the new connection options via Bergamo, and the results indicate that Madrid and Athens are the leaders when it comes to where people will be connecting to. For the analysis, anna.aero has assumed that Ryanair will be able to capture 5% of the indirect market on routes that currently have no direct flight, and 2.5% on services that are served directly by other airlines (excluding Ryanair’s 13 routes), regardless of the business model (legacy vs LCC).

In 2016, just over 275,000 passengers used Ryanair’s link between Madrid and Bergamo, representing a load factor for the carrier on the route of 92%. Looking at connections for Madrid using OAG traffic data, the new operation could generate a further 2,700 passengers on the route, which would help contribute to increasing the airline’s load factor to the Spanish capital to just under 93%. Athens’ load factor is not a good as Madrid’s (87%), however with a potential connecting market size of 3,500, this would jump to just below 89%. 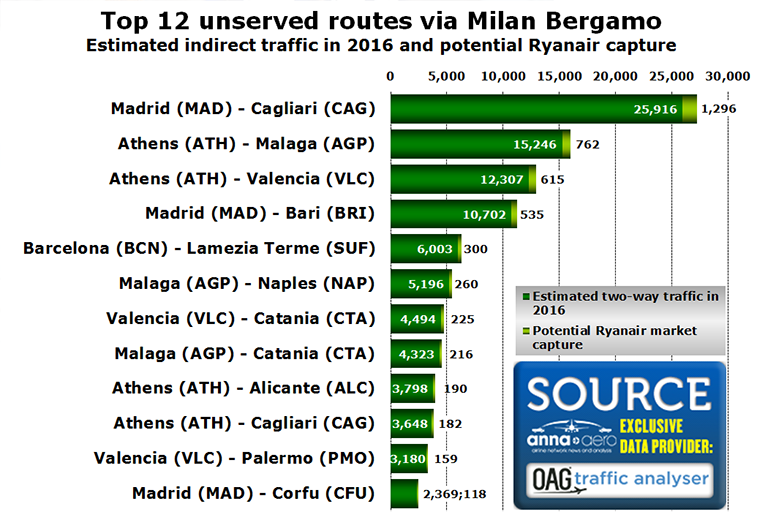 Looking at the top 12 unserved routes that are now available on Ryanair, four of them in 2016 saw over 10,000 indirect passengers. The leading unserved route is between Madrid and Cagliari, a sector which in 2016 saw 36 PDEW (It should be noted that the route has just been started by Iberia Express, with it beginning services on 16 June). If Ryanair is able to capture some of the market on all of these top 12 unserved routes and track them through Bergamo, it should generate 4,700 annual passengers for Bergamo, around 24% of the expected total connecting traffic that the new ULCC hub will generate. The table below shows how the new connections could help stimulate traffic from Bergamo on the initial 20 routes in more detail (assuming that seat capacity remains unchanged).

Looking at the routes, excluding Naples (highlighted in green) which only started on 1 May, the destination that sees the greatest benefit is Malaga, which if demand is to be believed, could see a healthy 3.4% increase in its annual load factor, while Athens is second with a predicted load factor increase of 2.0%.

First round of connections could lead to 19,000+ extra Bergamo passengers

With this first round of connection options via Bergamo, Ryanair can expect to welcome an additional 19,000+ passengers across these 20 routes. If we take the 122 routes that are not served directly by another carrier, a 5% share of the market would generate an extra 10,600 passengers. Of the routes that are served directly by another carrier, yet still see indirect traffic, Ryanair could accumulate 8,800 passengers if it was able to take a 2.5% share of the indirect market.

Now it should be pointed out that Ryanair is already offering connections via Fiumicino for passengers travelling from Alicante, Barcelona, Bari, Brussels, Catania, Comiso, Malta & Palermo, with six of these also being connection routes at Bergamo (excluding Brussels and Comiso). This option could effect the traffic demand that could pass through the Milanese airport. 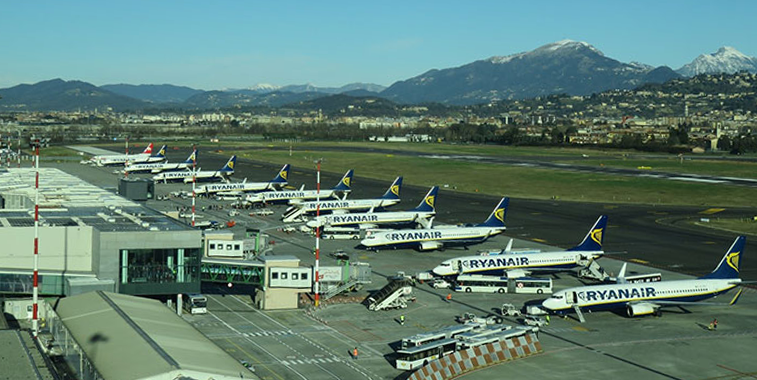 Milan Bergamo is Ryanair’s biggest base in mainland Europe, with it welcoming 9.2 million Ryanair passengers in 2016 and achieving an average load factor of 90%. The airport, with the addition of connecting traffic, can expect to welcome an additional 19,000 passengers (based on the anna.aero forecast) during the initial phase of the scheme, while O&D traffic should pass 10 million this year.