Seychelles seat capacity up 27% thanks to the arrival of Qatar Airways and Turkish Airlines; Asia and Europe lead growth 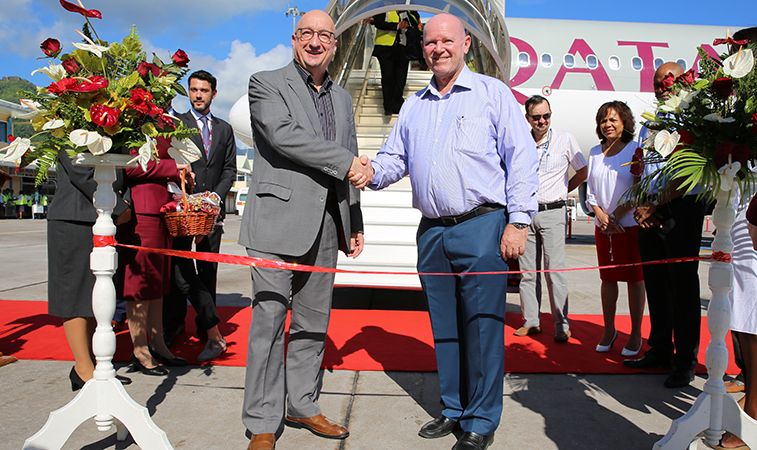 Qatar Airways’ CCO Dr. Hugh Dunleavy was welcomed by Seychelles’ Minister of Tourism, Civil Aviation, Ports and Marine, Alain St Ange, after the touchdown of the oneworld member’s inaugural flight to the Seychelles from Doha in December. OAG schedules show that weekly seat capacity to the nation is up 27% in S17 when compared to S16.

The Seychelles is an archipelago of 115 islands in the Indian Ocean, off the coast of East Africa. It’s home to numerous beaches, coral reefs and nature reserves, as well as rare animals such as the giant Aldabra tortoises. This predominately leisure destination (only 3.0% of visitors to the Seychelles in 2016 travelled for business) has a population of around 94,200 inhabitants according to the country’s National Bureau of Statistics.

For the w/c 27 June, schedules show that weekly seat capacity to the Seychelles is up 27% when compared to the same week of the previous year, no doubt helped by the arrival of Qatar Airways and Turkish Airlines towards the end of 2016. Looking at annual one-way seats for the nation between 2007 and 2016, the results show that the average year-on-year increase in capacity is 6.2%. With 2016 capacity rising by nearly 19%, and 2014’s having grown by close to 36%, it indicates that the popularity of the Seychelles has increased during the past few years when compared to the start of the decade. 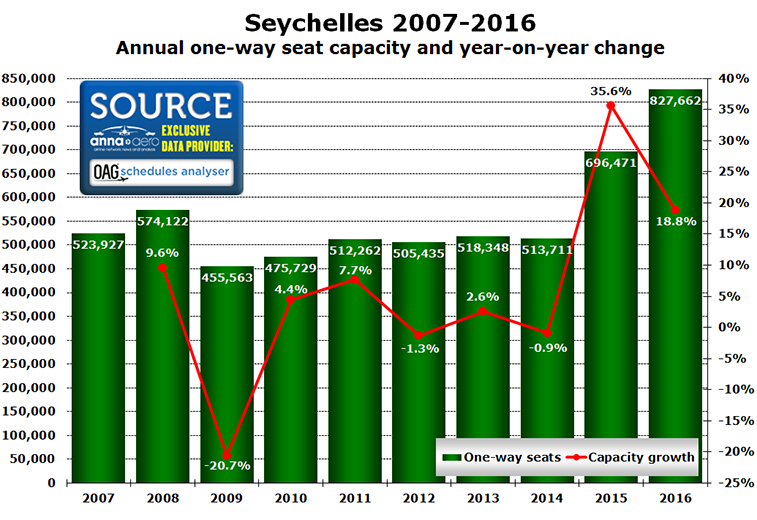 Referring to OAG schedules, the number of available seats from the nation is certainly higher than the visitor numbers published by the National Bureau of Statistics. Even if we doubled the visitor statistics to give a representation of one departure and arrival count per passenger, it still falls short of the total one-way seat capacity. However what both sets of data show is that the popularity of the Seychelles as a destination is certainly on the rise during the past few years.

Air Seychelles is the largest carrier of the 10 airlines (up from eight in S16) that serve its home nation, with it occupying just under 60% of all seats, however its overall share of the market has dropped 0.4% when compared to the same week last year. It currently has a fleet of: two A320s; two A330-200s; and six DHC-6 Twin Otters for intra-island hopping. Overall the carrier has increased its seat capacity from the nation by nearly 26% during the past 12 months. 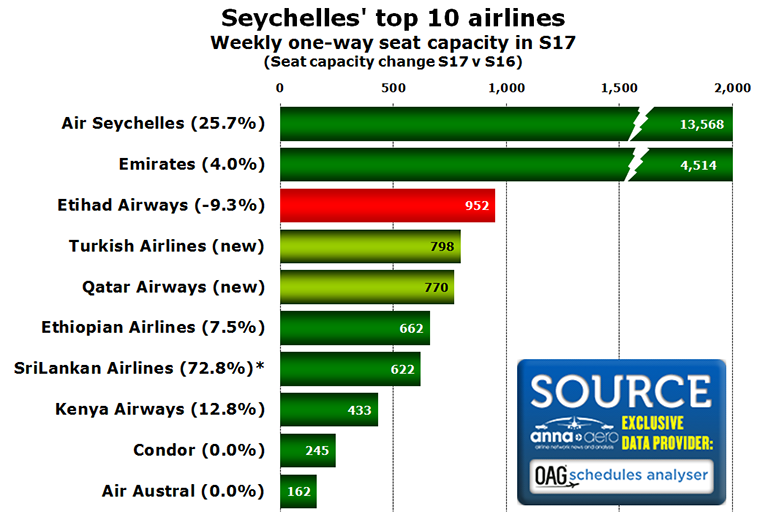 Source: OAG Schedules Analyser data. *SriLankan Airlines, while a new carrier, replaces Mihin Lanka on the route to Colombo, so therefore it is not a brand new service unlike Qatar Airways and Turkish Airlines.

The Seychelles has welcomed three new carriers during the past year – Qatar Airways, Turkish Airlines and SriLankan Airlines. While the latter is a new carrier to the nation, it replaced Mihin Lanka (which has now ceased operation) on the route to Colombo, so therefore it is not a brand new service unlike Qatar Airways and Turkish Airlines (highlighted in light green). Of the top 10 serving airlines, only one (highlighted in red) has posted a capacity decline over the last 12 months, that being Etihad Airways (-9.3%). A summary of the new routes launched in the last year from the Seychelles include: Air Seychelles to Düsseldorf and Durban (both launched 30 March); Qatar Airways from Doha (12 December); and Turkish Airlines from Istanbul Atatürk (31 October). One city pair that has ended in the past year is Air Seychelles’ service to Beijing (ended 15 February). 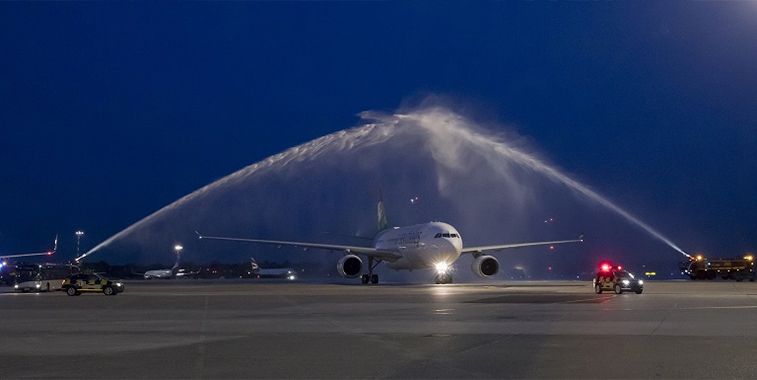 One of the two routes launched by Air Seychelles in the last year was Düsseldorf, with the first flight being greeted in the German city with a water arch salute. The carrier’s capacity from its home nation has increased by close to 26% during the past 12 months, with it occupying just under 60% of all seats from the nation in S17.