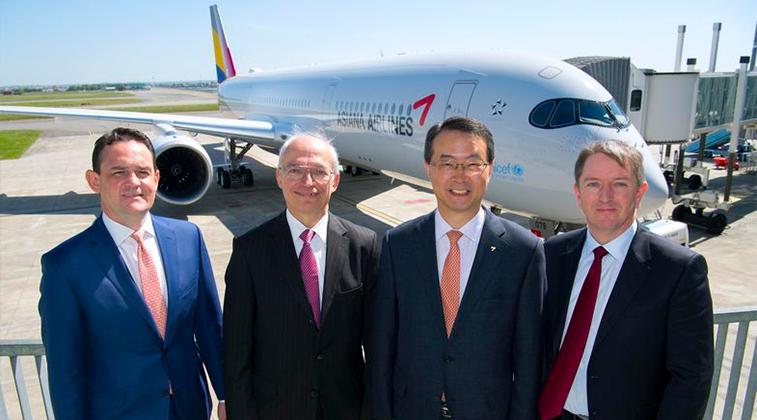 Asiana Airlines became the 12th airline to operate the A350 as it took delivery of its first one in Toulouse on 24 April. Seen at the delivery ceremony are: Ewen McDonald, SVP Asia-Pacific, Rolls-Royce; Didier Evrard, EVP Head of Programmes, Airbus; Soo Cheon Kim, President and CEO, Asiana Airlines; and Peter Barrett, CEO SMBC Aviation Capital.

Following on from 136 aircraft deliveries in March, Airbus and Boeing witnessed a slow-down in productivity during the fourth month of this year, with both companies combined managing to deliver 98 units in April, 28% fewer than the month before. When compared to April 2016, the total deliveries in the fourth month of this year were eight less (7.5% fewer) than the 106 provided last year. Boeing is the leader with regards to aircraft handovers in April, the same as it was in the three previous months of 2017, with it distributing 52 units, six more than its European counterpart. Boeing was also #1 in both narrow- and wide-body deliveries for April, with it distributing two more of the former and four more of the latter to airlines around the world. The result means that so far in the 2017 delivery race Boeing is leading Airbus 221 to 182 with regards to total unit handovers (29% more), a gap of 39 aircraft. In April, 76% of units delivered were single-aisle, with the remaining 24% wide-body. This compares to the 72% single-aisle and 28% wide-body ratio that was registered in the same month of 2016. 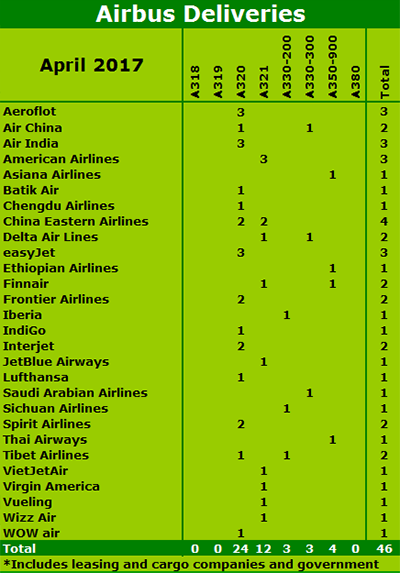 Airbus ended April with a total of 46 unit deliveries, 16 less than it delivered in March and six less than it did in the same month of 2016. For the fourth month of this year, single-aisle deliveries were led by the A320, with 24 being handed over to 13 airlines and one leasing company. The leading customers of the A320 in April were Aeroflot, Air India and easyJet, with each carrier collecting three of the type to add to their fleets. Following the A320, the A321 was Airbus’ second most popular single-aisle type, with 12 being handed over to nine carriers. American Airlines was the leading customer of the A321, with the oneworld member collecting three, and in second spot was China Eastern Airlines which picked up two.

In relation to the wide-body market, Airbus handed over 10 units, five less than in managed in March, but equal to its total for February this year and April 2016. The leading aircraft type to be delivered was the A350, the number one unit in March as well, with four being handed over to four separate carriers, including the aircraft’s latest and 12th operator, Asiana Airlines. Altogether Asiana Airlines has ordered 30 A350s, and will initially operate the aircraft on flights within Asia. From Q3 2017, the carrier will deploy the aircraft on premier long-haul routes to Europe and the US, beginning with services from Seoul Incheon to London Heathrow and San Francisco. Three A330-200s and three -300s were also handed over to six separate airlines during April. In April, EGYPTAIR took delivery of its latest 737-800, registered SU-GEH, which has a special 85-year livery to promote the carrier’s 85th birthday, with the airline having been founded in June 1932 as Misr Airlines. EGYPTAIR officials and crew can be seen welcoming the aircraft as it landed in Cairo from Boeing Field. 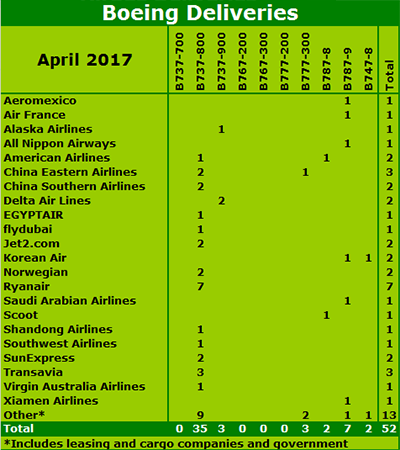 Boeing delivered 52 aircraft in April, 22 less than it delivered in March, and two less than it managed during the same month of last year. Of Boeing’s deliveries in the fourth month of 2017, 38 were single-aisle. The leading aircraft model of its single-aisle products was again the 737-800, with 35 (eight less than in March) being handed over to 13 airlines and many leasing companies. The leading customer was once again Europe’s largest ULCC, Ryanair, with it welcoming seven of the type, the same amount it received in March and February. Another leading carrier to receive the 737-800 in April was Transavia, with it accepting three units respectively.

An analysis of the wide-body market shows that Boeing handed over 14 units in April, 13 less than it managed in March. The leading model was the 787-9, with seven being handed over to seven airlines and leasing companies. Along with the 787-9s, three 777-300s, two 787-8s and two 747-8s were also delivered in April. 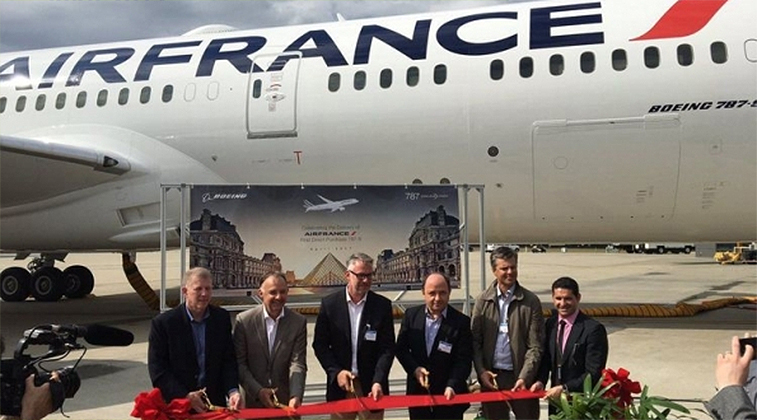 On 21 April Air France took hold of its latest 787-9 at a ceremony in Seattle, the second of the type to join the French flag carrier’s fleet. When referring to OAG schedules, the SkyTeam member is currently using the aircraft type on services from Paris CDG to London Heathrow, Lyon, Cairo and Montreal. The airline will use the aircraft on select routes to Africa from latter this year, including Freetown, Bamako and Abidjan. The 787-9 was the most popular long-haul unit to be delivered by Boeing in April.