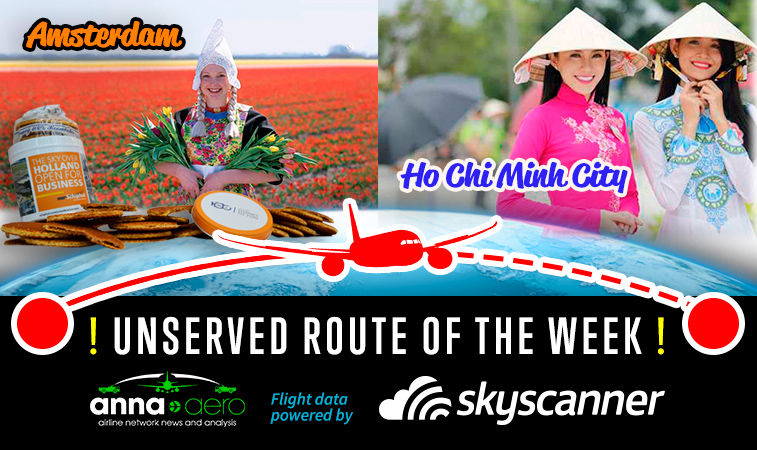 Some of the 530,000 potential travellers which looked for flights between Amsterdam and Ho Chi Minh City may well have needed a few Stroopwafels after their fruitless search for direct flights between the Netherlands and Vietnam. With this Skyscanner data we fully expect many of these people will be noshing on some Pho – the national dish of Vietnam – in the next 12-18 months.

With over 530,000 searches in the last 12 months, a potential city pair from Amsterdam to Ho Chi Minh City has been identified as this week’s “Skyscanner-anna.aero Unserved Route of Week” – a powerful analysis based on aspirational data captured from the Skyscanner.net flight comparison site used by +60 million unique visitors per month. “Vietnam was served many years ago by KLM – it operated between 1993 and 1998,” confirms Wilco Sweijen, Director Aviation Marketing, Amsterdam Airport Schiphol. “Over the years we have seen a stable growth of the O&D traffic [now all indirectly] from Amsterdam to Vietnam.” 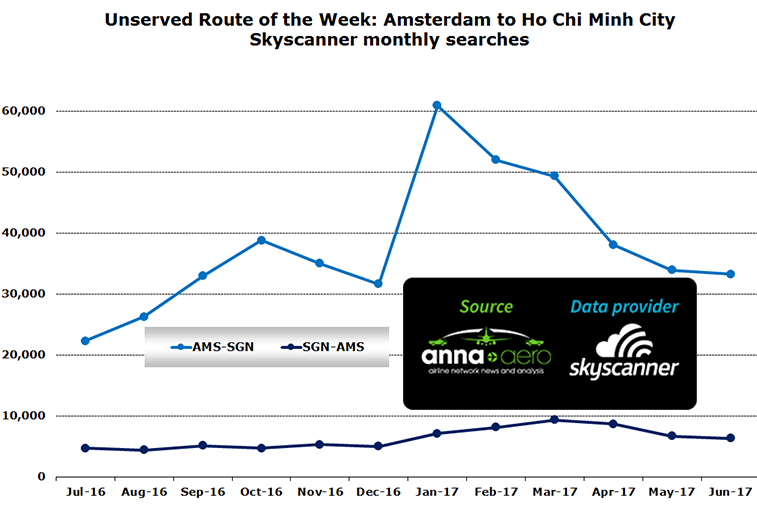 anna.aero to convince KLM or Vietnam Airlines to venture onto this link

Skyscanner demand on this week’s unserved route shows a significant bias towards the Amsterdam end of the city pair, with an 86/14 split, so on this basis we looked at potential carriers at the Dutch end first. Unsurprisingly, flag carrier KLM is the biggest carrier at the airport, commanding half (50%) of weekly seats at the facility according to OAG data for the week commencing 4 July. The Skyteam carrier currently offers 158 destinations from Amsterdam, of which 19 are to Asian destinations, including six in Ho Chi Minh’s sub-region of Southeast Asia – namely Bangkok Suvarnabhumi, Denpasar, Jakarta, Kuala Lumpur, Manila and Singapore. Having consulted anna.aero’s new route database, the airline is planning to add several long-haul sectors from Amsterdam in W17/18 – Mauritius, Mumbai and San Jose (Costa Rica) – the latter two of which are relaunches, so the airline is clearly dusting off the old business cases on formerly-operated routes, and hopefully with this Skyscanner data now being made public, Vietnam and Ho Chi Minh City could be its next welcome service resumption.

Amsterdam’s second and third largest carriers are Transavia (7.5%) and easyJet (7.0%) respectively, which are both unlikely to start services to Vietnam any time soon. To find the next most-likely Dutch-based airline to start this city pair, we have moved right down the rankings to the ninth largest carrier at the airport – TUI Netherlands. While it does have a broad long-haul network, predominantly to the US and Caribbean, among its 14 destinations from Amsterdam, none of them are presently in Asia. On this evidence, a sector to Ho Chi Minh City for the #9 carrier might be a network jump too far for TUIfly Netherlands, so it would seem that this unserved route opportunity is presently in the hands of KLM alone at the Dutch end of the potential city pair. 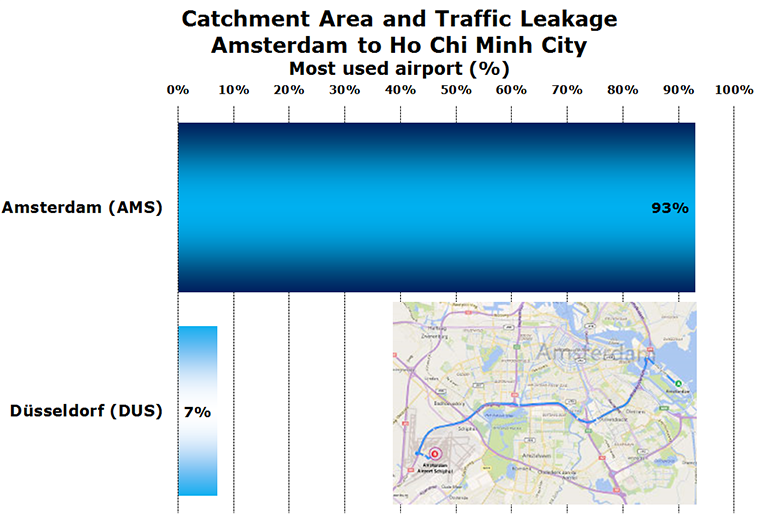 Faical Allou Skyscanner’s Business Development Manager says: “Amsterdam serves 93% of the traffic from the catchment (100 km around the airport) going to Ho Chi Minh City. With better service, such as a non-stop operation, the traffic could grow by 7%.” Note: given the sample size the confidence interval for the share of Amsterdam is +/-0%.

Contemplating the Vietnamese end of the route, the potential carriers in Ho Chi Minh City were considered next. The airport’s capacity is led by national carrier Vietnam Airlines, which with is 160,000 weekly seats controls around 36% of capacity. The airline’s current 38-destination network only has three European points (just 3,100 weekly seats), to Frankfurt (1,244), London Heathrow (933) and Paris CDG (915). So with four out of five of Europe’s biggest airports already served from Vietnam (Turkish Airlines flies from Istanbul Atatürk to Hanoi and Ho Chi Minh City), Amsterdam would seem to be the next logical choice for Vietnam Airtlines when next considering European expansion. “According to Schiphol’s Continuous Survey [based on passenger surveys at the airport] we see flows from Amsterdam to Ho Chi Minh City of around 21,000 one-way passengers,” adds Sweijen.

When looking at the previous year of search data, the busiest month for potential traffic flows (for both directions on the route combined) is January 2017, with over 68,000 searches, more than 41,000 higher than the lowest monthly figure, which was recorded in July 2016 (27,000 searches). The seasonality profile of this search data is more extreme than the last Unserved Route of the Week (Brisbane to Delhi) with the low-month traffic representing 40% of the highest month. According to OAG Traffic Analyser, because there is no direct service, the top three connecting options chosen by those passengers who did book travel between Amsterdam and Ho Chi Minh City in the last year indicates that the majority of connecting travellers used Dubai (18%), Hong Kong (15%) and Abu Dhabi (12%). Overall, 23 different airports were used by transit and transfer passengers looking to get between the two cities.

Indeed, an O&D that is not served by a non-stop flight will typically display a low purchase rate and low traffic. In this instance Skyscanner’s Travel Insight indicates a monthly average of 6.5% for the Amsterdam to Ho Chi Minh City route (see graph below). Therefore, if there was an Amsterdam to Ho Chi Minh City route, and if bookings performed in line with the “Skyscanner market average” for direct services at both airports (8.2%), the airline operating this route could immediately expect an improved purchase rate of 27%, without any increased marketing spend. However, with over 530,000 annual searches in the past 12 months, a daily service should be immediately viable for the airline selecting to start this potential city pair. “If the route is served by Vietnam Airlines this would strengthen Amsterdam’s position as the world’s most diverse SkyTeam hub; we are already the airport with the most SkyTeam airlines, with the addition of Vietnam Airlines we would only be missing two SkyTeam carriers,” concludes Sweijen. 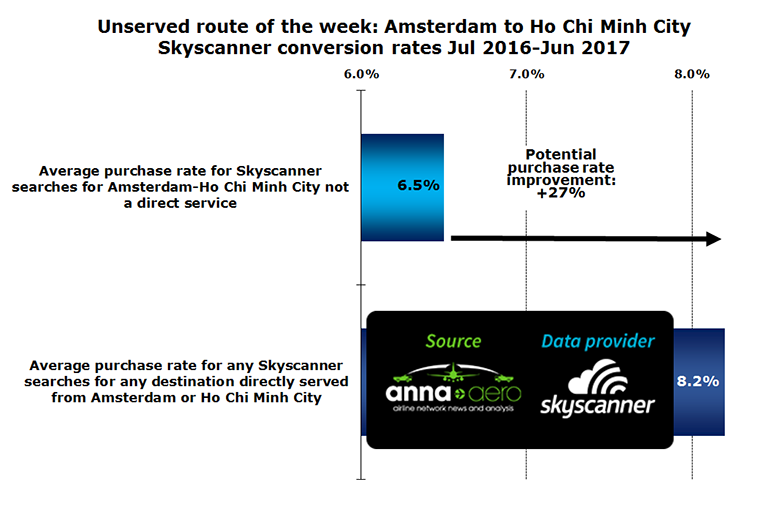