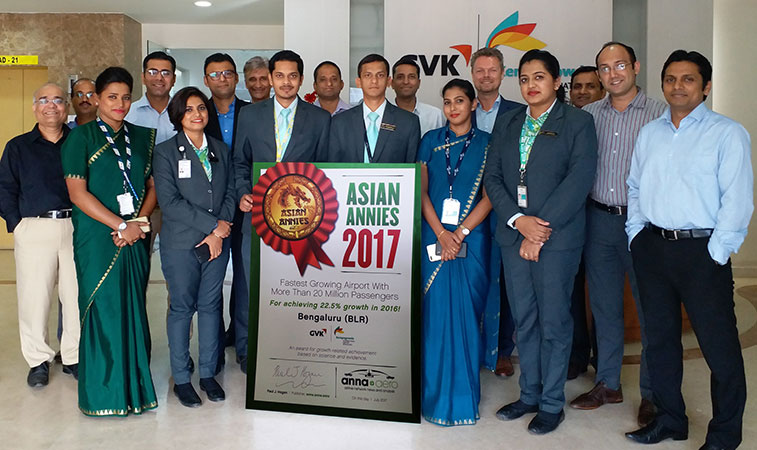 Bengaluru may have moved up into the ‘heavyweight’ division (for airports with more than 20 million passengers) but that didn’t stop it repeating its win from last year. With passenger numbers up 22.5% to 22.2 million in 2016 the Indian airport just edged out Ho Chi Minh City in Vietnam which registered passenger growth of 22.4%.

Following our recent US ANNIES Awards for airline and airport route development and traffic growth, this week we focus on Asia. Yes, it’s the 7th Asian ANNIES, awarded to eight airports and four airlines for their notable route development achievements in the Asian region over the past 12 months. Our awards are based on science, statistics and evidence rather than people’s opinions (and votes). Using OAG schedule data for 1-7 August 2017 compared to 1-7 August 2016 from across over 800 airports and 270 carriers operating in the Asian region, our team of data elves have studied the figures and we think we have come up with a more transparent way of rewarding airlines and airports that have achieved notable route and traffic related success in the Asian region during the last year.

Airport With The Most New Routes
Winner: Chengdu and Lanzhou;
Runners-up: Jinan, Kunming and Tianjin 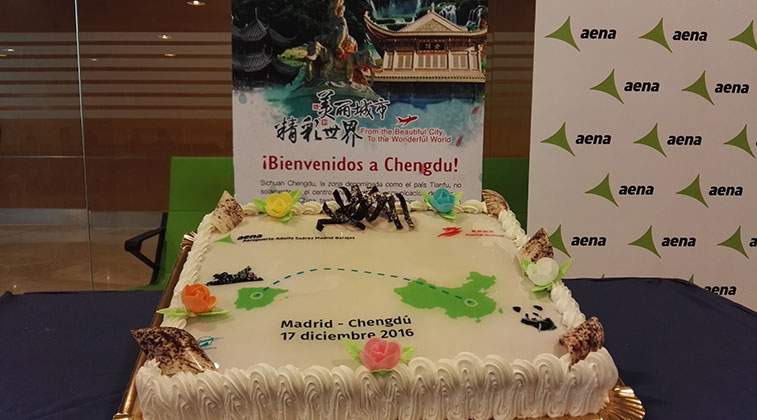 Chengdu, host of last year’s World Routes, saw a net gain of 22 routes during the last 12 months. This included a new route to Madrid with Beijing Capital Airlines which launched on 17 December.

Chinese airports dominate this category. The two previous years have seen wins for Shanghai Pudong (in 2015) and Nanning (in 2016). This year two airports share the award with Chengdu and Lanzhou both reporting a net gain of 22 destinations. Chengdu has gone from 129 to 151 while Lanzhou has increased its network from 40 to 62 destinations. The three airports tied in the runner-up spot all gained an additional 21 destinations. 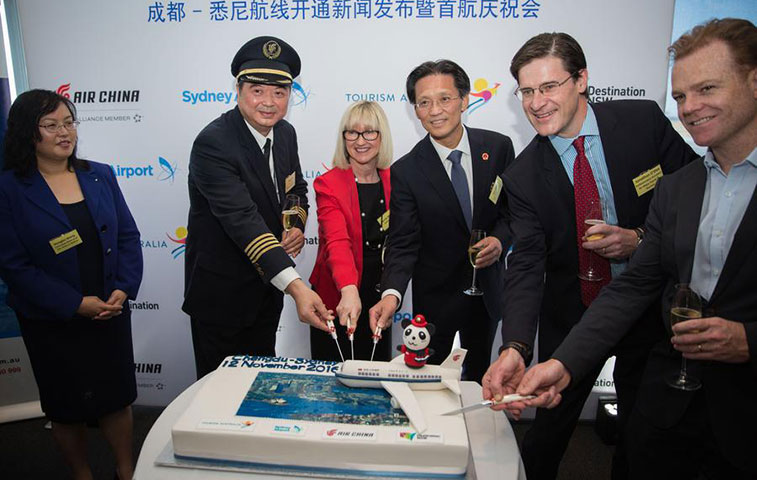 Another win for Chengdu which welcomed seven new long-haul destinations in the last 12 months. This included Sydney, a route launched last November by Air China and celebrated by the Australian airport with this impressive cake.

After three straight wins Beijing has been replaced as winner of this award by Chengdu. Our definition of a long-haul route is a flight of over 4,500 kilometres originating from the Asian region. Chengdu has grown its long-haul network from 10 to 17 destinations, a net gain of seven. Despite losing its London Heathrow service with British Airways, Chengdu gained new non-stop flights to Addis Ababa, Auckland, Denpasar, Dubai, Los Angeles, Madrid, Prague and Sydney. Guangzhou and Tokyo Haneda both increased their long-haul networks by five destinations. The Chinese airport’s long-haul additions consisted of Adelaide, Moscow Domodedovo, Muscat, Reunion and Toronto Pearson.

Airport With The Most New Carriers
Winner: Nanchang;
Runners-up: Dalian, Guangzhou and Sanya 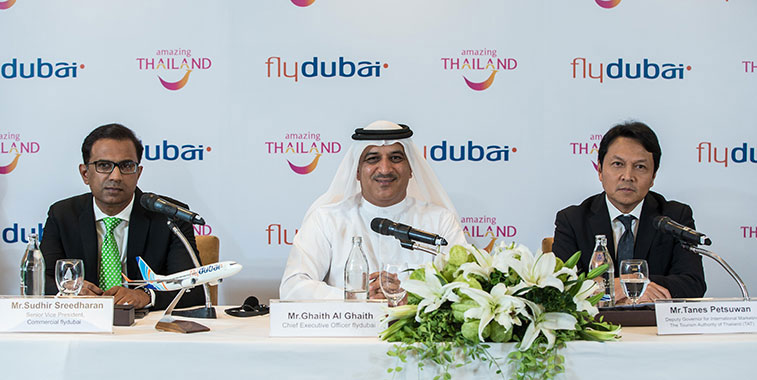 flydubai launched twice-daily flights to Bangkok in November, joining Emirates and Thai Airways on the route. This helped the Thai airport to grow its airline portfolio to 93, pulling even further clear of Hong Kong as the Asian airport with the most airlines.

For the sixth straight year Bangkok Suvarnabhumi wins the ‘planespotter award’ (as it is affectionately known by anna.aero data elves), once again beating Hong Kong (runner-up for the sixth time in a row). Suvarnabhumi’s airline portfolio currently stands at 93 airlines (up three from last year), 10 ahead of Hong Kong with 83 (up from 81 last year). Thailand’s busiest airport looks set to retain this award for a while yet as it increases its lead to its nearest rival. Among the top 10 airports in this category, the one gaining the most new airlines compared with last year was Guangzhou, which gained nine carriers and is now served by 68 airlines.

Using a combination of OAG Schedules Analyser data as a guide and then our Rest of World airport traffic database (and other sources) to check actual passenger numbers we have awards in four different categories based on the airport’s size (measured by annual passenger throughput). Just to confirm that what we are recording here are passengers numbers in 2016 compared with 2015.

Two airports here also won awards last year, but in different categories. India’s Bengaluru Airport won in the 10m-20m category last year and has won again, this time in the >20m airport category. It was a narrow victory over Vietnam’s Ho Chi Minh City. Jakarta’s second airport won the 2m-5m category last year but is now victorious in the 5m-10m category as Indonesia’s main airport in Jakarta continues to struggle with capacity issues. Four of the eight airports are in booming Vietnam, two in China and one each in India and Indonesia. 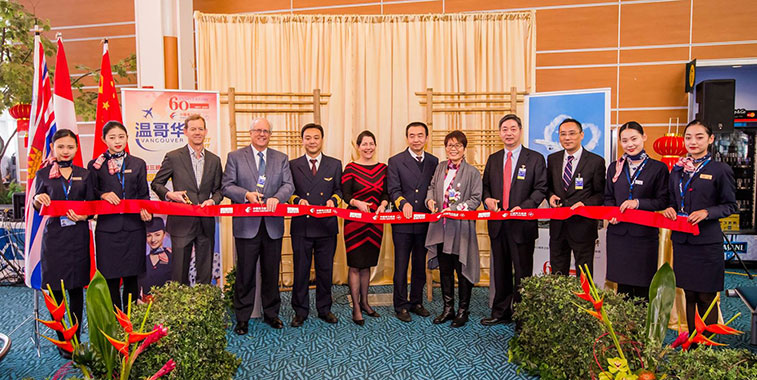 China Eastern Airlines launched non-stop service from Nanjing to Vancouver last December, celebrated here with a ribbon-cutting ceremony at the Canadian airport. In all the SkyTeam carrier has increased its network by 151 routes, though it should be noted that routes within Asia are double-counted.

China Eastern Airlines wins this award again, having last won it in 2015. That makes it four wins in a row for Chinese carriers. With 151 new routes the SkyTeam carrier is a clear winner with runner-up, Guangxi Beibu Gulf Airlines, registering 127 new routes according to our analysis of OAG data for the first week of August. In this category new routes within Asia are double-counted (once from each end of the route) while new routes to destinations outside of Asia are only counted once. 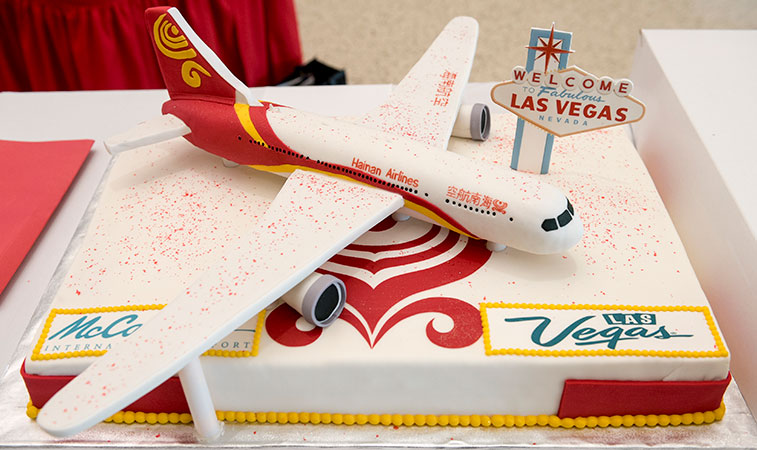 Hainan Airlines grew its long-haul network by over 40% from 19 to 27 routes in the last 12 months. Seven of the new routes are operated twice-weekly but the Beijing to Las Vegas route gets three weekly flights.

Last year’s winner Air China has to make do with being a joint runner-up this year as Hainan Airlines scoops the prize for the biggest net gain in long-haul routes (defined as flights of over 4,500 kilometres). It grew its long-haul network from 19 to 27 (a net gain of eight), including four new routes to Australia, three to the US and one to New Zealand. All of these currently operate with just two weekly flights apart from the Beijing to Las Vegas route which is flown three times weekly. In terms of total long-haul routes from Asian airports, Korean Air leads the way with 50 but is being caught by Air China (currently on 46) and All Nippon Airways (with 45).

After being runner-up last year, Guangxi Beibu Gulf Airlines goes one better this year, taking the prize thanks to seeing its list of airports served increase by 35 from 25 to 60 in the last 12 months. Launched in February 2015 and part-owned by Tianjin Airlines the carrier, also known as GX Airlines, currently has a fleet of 15 aircraft, a mix of A320s and E190s. Runner-up Lucky Air increased the number of airports served in the region by 24 from 61 to 85.

This award goes to the airline with the most scheduled seats operating from Asian airports in August 2017 that was not operating in, or to, the Asian region in August 2016. Based purely on OAG data the top two airlines in this category appear to be Chongqing Airlines and Joy Air. However, both airlines were operating last summer but were not sending data to OAG. As a result we are awarding the prize in this category to Serene Air of Pakistan (IATA code ER), an airline which launched in January 2017 and which currently operates three 737-800s on domestic routes involving six airports. 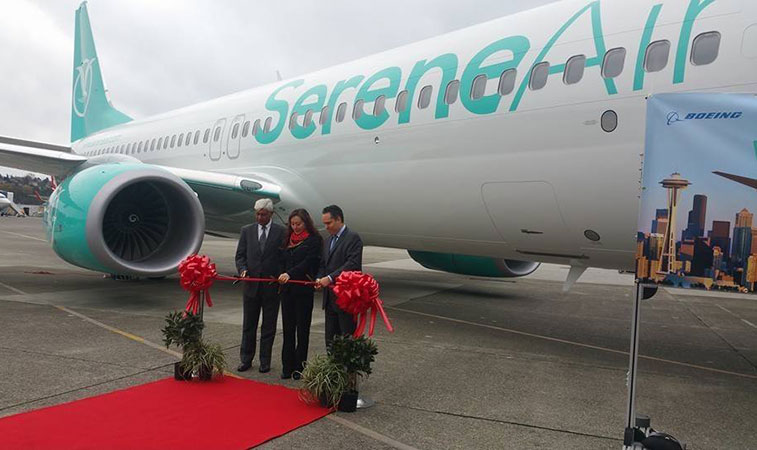 Serene Air of Pakistan took delivery of its first 737-800 at the end of last year before commencing operations in January 2017. It currently operates domestic flights from six airports in Pakistan.