Air Algérie seat capacity up 7.5% in 12 months; Budapest and Porto among new destinations; 31% of traffic flown on domestic routes 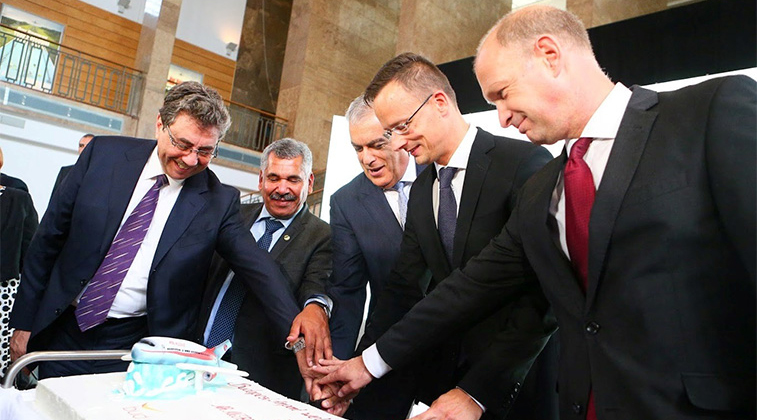 Last year, Air Algérie began flights to Budapest, one of a few new additions to the carrier’s route map in 2016. Overall the carrier’s weekly seat capacity has risen 7.5% in S17 when compared to S16. The North African carrier is far from dynamic however, as currently no new routes are planned for the rest of this year, nor are there any for 2018.

Air Algérie is by far the largest airline in its home market, with the carrier controlling 65% of all seats from Algeria in 2016 (up from 63% in 2015), with French carrier Aigle Azur second with 11% of seats and Tassili Airlines third on 3.9%. Overall, Air Algérie is Africa’s fifth largest carrier in relation to passengers carried, with it serving 5.5 million people in 2015. It trails behind EGYPTAIR (8.8 million passengers in 2015), Ethiopian Airlines (7.0), South African Airways (6.6), and Royal Air Maroc (6.2) when consulting data from the African Airlines Association (AFRAA).

Serving over 5.5 million passengers per annum

Acquiring data about Air Algérie is not as easy as it appears, with the airline not regularly publishing its accounts in an annual report. However anna.aero has been able to track down some figures for the airline via AFRAA, with 2015 being the last year when data was published. That year the carrier handled 5.5 million passengers, up 5.8% when compared to 2014, and up by an impressive 91% since 2007. 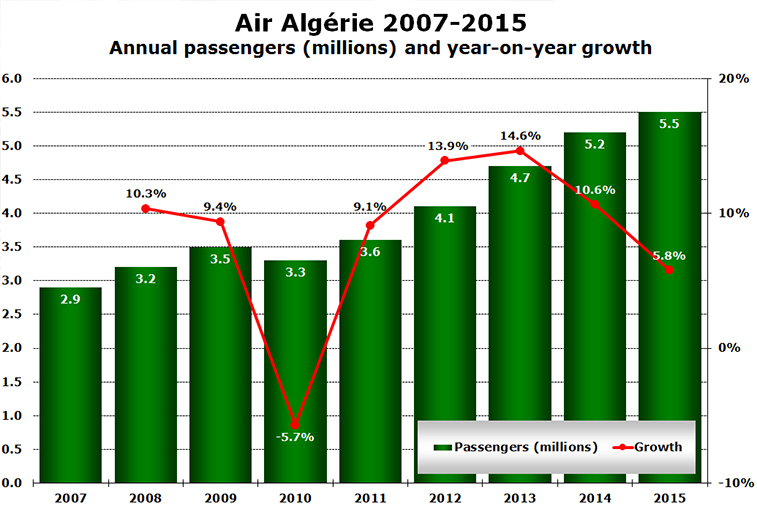 Of the passengers that travelled with the airline in 2015, 31% flew on domestic services, with 6.6% travelling on routes to other destinations in Africa and the remaining 62% using Air Algérie to fly intercontinental. For the three years when anna.aero has been able to obtain passenger traffic splits for Air Algérie (2013, 2014 and 2015), the market share ratios for passengers have remained unchanged, showing that the carrier is growing equally in all sectors. The best year for growth between 2007 and 2015 was in 2013, a year which witnessed traffic rise by close to 15%.

With this data, anna.aero has been able to calculate a theoretical average load factor for the airline over the past decade by comparing the passengers carried against the scheduled seat capacity data that is available in OAG. What the results show is that between 2007 and 2015, Air Algérie’s average load factor has increased from 57% to 68%, meaning the airline’s load factor in that period increased on average by 2.5% year-on-year. In the same time, the carrier’s average year-on-year growth in passengers was 8.6%. For 2016, according to OAG schedules, Air Algérie’s annual seat capacity increased by nearly 16%, way more than the carrier’s average for the years before. If we take the airline’s regular traffic increase and compare it to the growth in capacity, the airline should have carried just under six million passengers last year with a common load factor of about 64%. That would mean the airline’s load factor could be around four points lower than the 2015 average.

Algiers leading airport with 34% of capacity

Air Algérie’s leading airport is its hub at Algiers, with the Algerian capital airport accounting for 34% of the airline’s weekly seat capacity this summer, a share that has increased by 0.8% since 2015. Overall during the past 12 months the carrier has increased its seat offer from Algiers by 10%. Of the airline’s top 12 airports, half (highlighted in light green) are outside of Algeria, with the leading two international airports being Paris Orly (third biggest airport operation) and Paris CDG (fourth). Overall, the airline’s weekly one-way seat capacity this summer has risen by 7.5%. 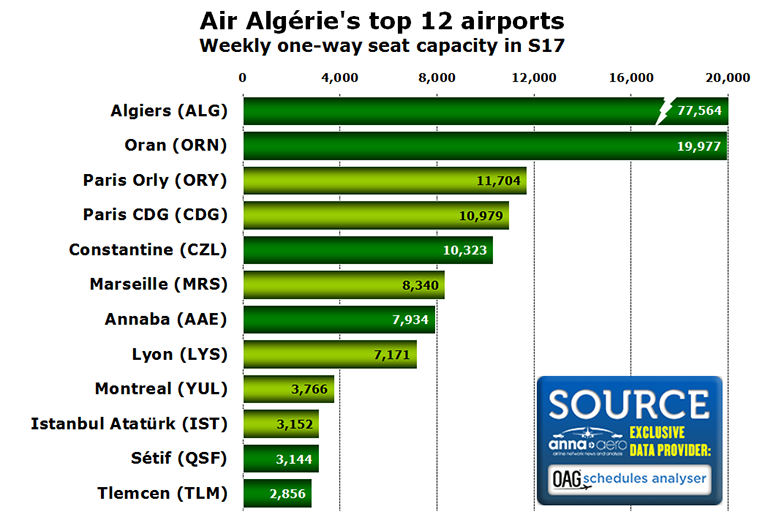 The top 12 airports account for 74% of Air Algérie’s one-way seat capacity this summer, up from the 71% share they had in S16. Since last summer, the carrier has added new services to Budapest and Porto. Flights to the Hungarian capital began on 15 September, while flights to the Portuguese city launched on 31 October, operating as a triangular service from Algiers via its existing Lisbon service when referring to OAG schedules. The latter route did have a break in operation between 25 March and 17 June, returning as a non-stop service from the Algerian capital. One city that was new last year but has now been dropped by the carrier after nine months of operation is Guangzhou. On 31 October, Air Algérie began twice-weekly flights between Algiers and Guangzhou, a route that ended on 17 June. This was the carrier’s second route into China after Beijing, with the latter service still being flown.

Along with the additions of Budapest and Porto, the airline has also recently begun several services between Algeria and France, including flights from Setif to Marseille (launched 21 June) and from Batna to Paris CDG (19 June). Apart from these sectors, the airline currently has no new routes planned for the rest of this year, however several city pairs have seen frequency increases when referring to OAG schedules. 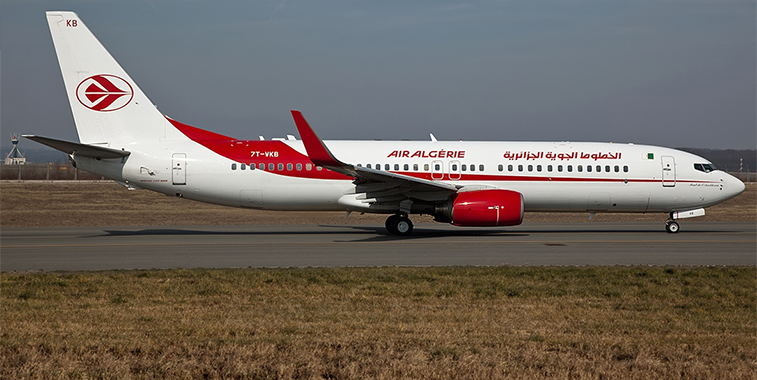 The 737-800 is the most popular aircraft in Air Algérie’s fleet, with the airline currently operating 25 of the type. The carrier last year used the aircraft to start new services to Budapest and Porto.