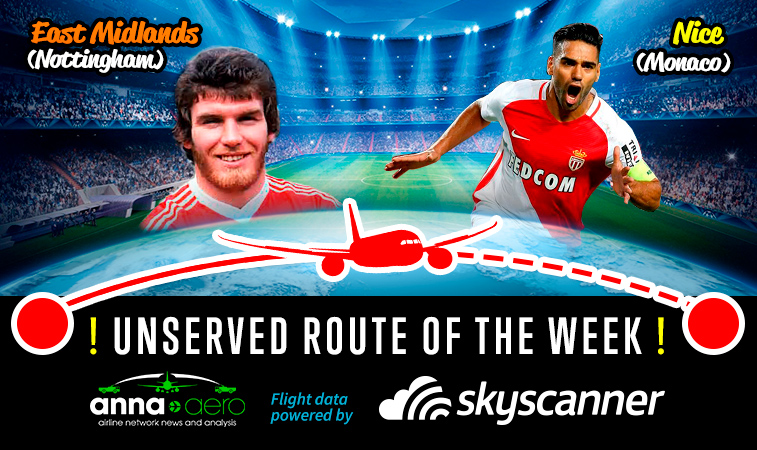 Uniting football champions with route development. Nottingham Forest won the English First Division (now the Premier League) in 1977-78, with Peter Withe (complete with hipster beard, 40 years ago) being the club’s top scorer in the league, with 12 goals (along with John Robertson). Radamel Falcao, of Monaco FC, who scored 19 goals in the team’s conquering of the French Ligue 1 last season is clearly incensed (he’s a big fan of Brian Clough – Forest’s manager in their triumphant season) that there is no route between East Midlands and Nice (the closest airports to Nottingham and Monaco), despite there being nearly 60,000 Skyscanner searches last year.

With nearly 60,000 searches in the last year, a potential city pair from East Midlands to Nice has been identified as this week’s “Skyscanner-anna.aero Unserved Route of Week” – a powerful analysis based on aspirational data captured from the Skyscanner.net flight comparison site used by +60 million unique visitors per month. “The glamour of the Côte d’Azur must be appealing to the people of the East Midlands!” says Howard Ebison, Commercial Director, East Midlands Airport (EMA). “In addition, it’s one of the biggest unserved routes from EMA.” 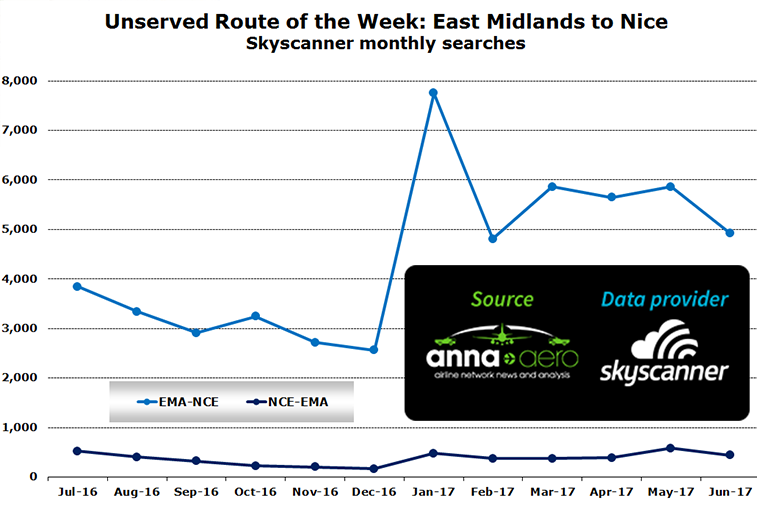 anna.aero recommends Ryanair or Jet2.com to jump onto this link

Skyscanner demand on this week’s unserved route shows a significant bias towards the East Midlands end of the city pair, with a 92/8 split, so on this basis we looked at potential carriers at the UK origin first. Europe’s largest airline, Ryanair, is the biggest carrier at the airport, with East Midlands being its 18th largest base in terms of weekly seats, commanding nearly half (47%) of weekly capacity at the facility according to OAG data for the week commencing 7 July. The ULCC currently offers 38 destinations from East Midlands, of which four are in France – namely Dinard (four times weekly), Limoges (three), Carcassonne (three) and Bergerac (two). Ryanair does also fly to Nice from two of its other bases, offering daily operations from Dublin and London Stansted this summer. Given its #1 position at East Midlands and with the airline already having a market presence in Nice, a service linking the two airports, as a result of this Skyscanner data now being made public, should be the next route Ryanair launches between the UK and France.

East Midlands’ second largest carrier is Jet2.com (23% share of weekly capacity), and with 33 direct destinations, it is the LCC’s fourth largest UK base, behind Manchester, Leeds Bradford and London Stansted. A bit like its rival, it also flies to Nice from two of these larger bases, Manchester (five times weekly) and Leeds Bradford (three). However unlike Ryanair, it does not have any existing French routes operating from East Midlands, so a move into into this market may well be a riskier option for Jet2.com. That said, both LCC’s could easily be making a coherent business plan to make this route work from the UK airport. “The potential route to Nice has the second highest demand to France after Paris,” confirms Ebison. 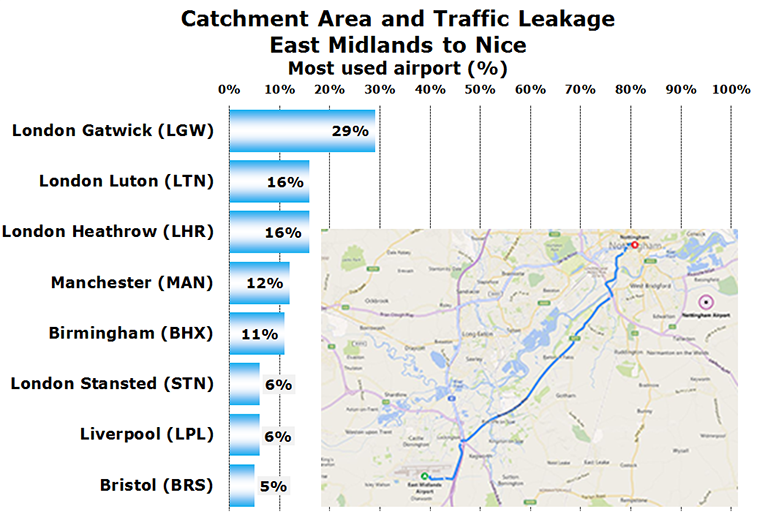 Faical Allou Skyscanner’s Business Development Manager says: “East Midlands serves less than 1% of the catchment (50 km around the airport) going to Nice. With better service, such as a non-stop operation, East Midlands will capture most of that traffic currently leaking to competing airports.”

Considering the French end of the route, the potential carriers in Nice were contemplated next. The airport’s capacity is led by another LCC, this time it’s easyJet, which with its near-50,000 weekly seats, controls around 26% of capacity. The airline currently serves eight UK airports with 88 weekly frequencies from France’s biggest airport outside of Paris. However, easyJet no longer has any market presence at East Midlands, as it closed its base there in 2010, which it acquired as a result of its acquisition of fellow LCC Go in 2003. However, the airline does operate to Bournemouth in the UK with just a single route (from Geneva), so if market conditions were right, then easyJet could re-evaluate the East Midlands market with a Nice operation in the first instance.

When looking at the previous year of search data, the busiest month for potential traffic flows (for both directions on the route combined) is January 2017, with over 8,000 searches, more than 5,500 higher than the lowest monthly figure, which was recorded in December 2016 (2,800 searches). The seasonality profile of this search data is more extreme than the last Unserved Route of the Week (Amsterdam to Ho Chi Minh City) with the low-month traffic representing just 33% of the highest month. According to OAG Traffic Analyser, because there is no direct service, the top three connecting options chosen by those passengers who did book travel between East Midlands and Nice in the last 12 months indicates that the majority of connecting travellers used Brussels (46%), Amsterdam (33%) and Palma de Mallorca (13%). While looking at the traffic flows in reverse, French-originating passengers opted for the same top two connecting options, however Dublin replaced Palma de Mallorca as the third most-used transfer point. “Our data shows that 50,000 people annually travel from EMA’s core catchment area to another airport to take a flight to Nice,” adds Ebison.

Indeed, an O&D that is not served by a non-stop flight will typically display a low purchase rate and low traffic. In this instance Skyscanner’s Travel Insight indicates a monthly average of 0.2% for the East Midlands to Nice route (see graph below). Therefore, if there was an East Midlands to Nice service, and if bookings performed in line with the “Skyscanner market average” for direct services at both airports (6.8%), the airline operating this route could immediately expect an improved purchase rate of a whopping 3700%, without any increased marketing spend. However, with nearly 60,000 annual searches in the past year, a two or three times weekly service should be immediately viable for the airline selecting to start this potential city pair. “The strength of East Midlands’ industry [advanced manufacturing, biomedical, car manufacturing] will support any business links between the two regions,” concludes Ebison. 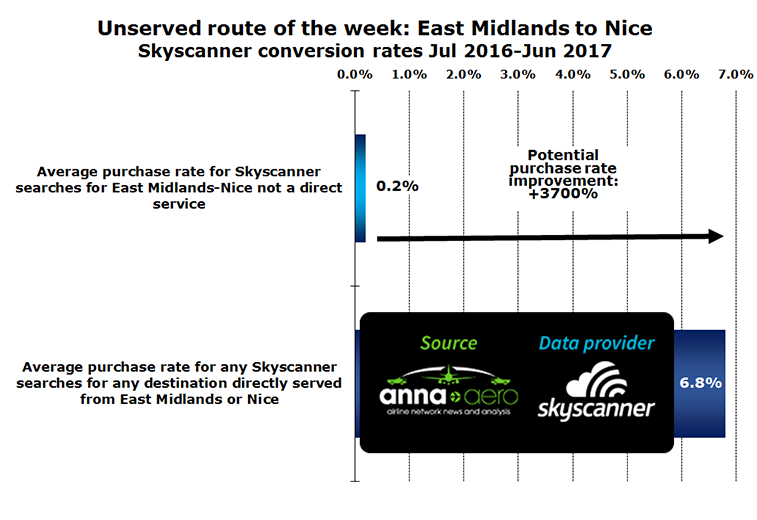