Halifax Airport passed 3.9 million passengers in 2016, its best year for growth this decade; airport to host Altitude East 2017 in September 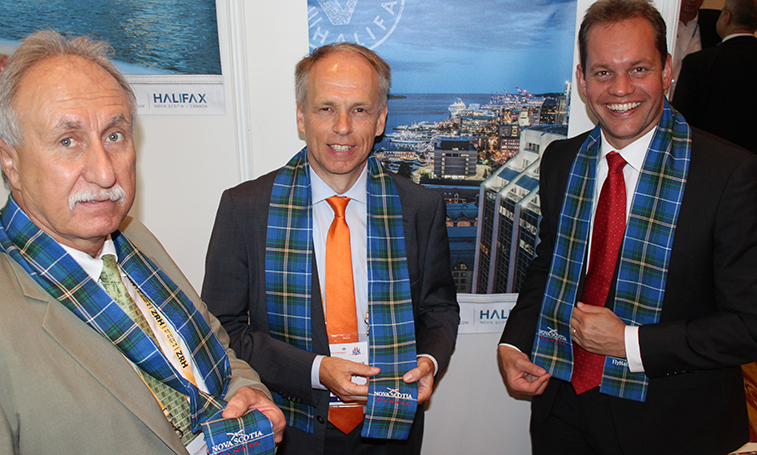 Halifax Airport in Canada, is the leading airport of Nova Scotia, and last year it welcomed 3.9 million passengers. With that, it means that Halifax was Canada’s eighth largest airport in 2016, with it sitting just behind Winnipeg which welcomed just over four million passengers. The airport serves the city of Halifax, mainland Nova Scotia and adjacent areas in the neighbouring Maritime provinces. The estimated population of Halifax in 2016 was 403,131, a rise of 3.3% when compared to 2011 census data provided by Statistics Canada. That puts Halifax as the 14th largest population in Canada. While the growth of inhabitants is impressive given its only over a five-year period, it means that demand for air travel from the city is increasing. Last year on average there were 9.6 passengers travelling through Halifax per head of the city’s population, up from an average of 9.2 trips in 2011.

As stated, in 2016 3.9 million passengers travelled from Halifax, an increase of 5.6% when compared to the year before. The growth witnessed last year was the biggest that the airport has seen during the past decade, with the next best year for growth being 2008, a year which saw traffic climb 3.2%. 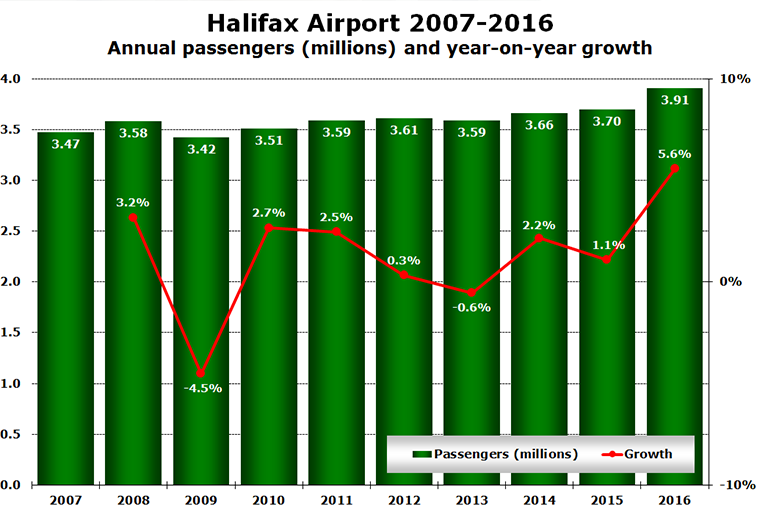 Halifax’s leading airline is Air Canada, with the nation’s flag carrier accounting for 48% of all seats this summer. It is followed by Canada’s leading LCC – WestJet – which operates 36% of seats. In third place is regional carrier Porter Airlines which has a 8.4% share of weekly seats in S17. The top international carriers are United Airlines and Condor, with the Star Alliance member’s service to New York Newark and the German leisure airline’s links to Frankfurt and Munich this summer occupying 1.7% of seats each. New airlines to Halifax during the past 12 months include Delta Air Lines and Elite Airways, with the SkyTeam member opening daily flights from New York JFK in January. The latter carrier is a recent addition, with it inaugurating a new link from Portland in Maine a few weeks ago. Another new tailfin for the start of S17 at Halifax is NewLeaf, self-proclaimed as Canada’s ULCC, with it linking the Nova Scotia airport to Hamilton towards the end of S16. NewLeaf’s flights are operated by Flair Air.

Halifax’s leading airport connection is Toronto Pearson, with the connection to Canada’s busiest airport accounting for over 27% of weekly departing seat capacity in S17. The link to Pearson is twice as large as Halifax’s second most popular route – Montreal – with it accounting for 12% of seats. Overall the top 12 routes, with 32 connections available this summer according to OAG schedules, make up 86% of weekly seat capacity. 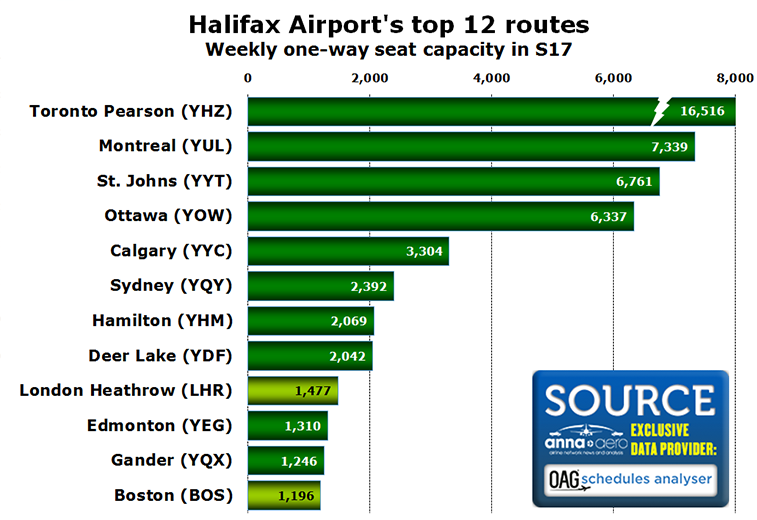 Of the airport’s top 12 routes, only two (highlighted in light green) are international connections, with the leading city pair being the long-haul sector to London Heathrow. The link to the UK capital is one of only two routes that are flown by Air Canada from Halifax on wide-body aircraft, with the Star Alliance member also using its 767-300s on some of its services to Pearson. According to OAG, around 18% of weekly seats between Halifax and Pearson are flown on the 767-300 in S17. Along with Air Canada, Condor also offers wide-body services from Halifax.

While a majority of routes from Halifax are domestic, with the Canadian market accounting for 88% of seats, the airport does have a strong offering of international services relative to its size. Along with Heathrow and Boston, this summer Halifax also has connections to New York’s JFK and Newark, Glasgow (flown by WestJet), Frankfurt, Reykjavik/Keflavik (Icelandair), Munich, Saint-Pierre (Air Saint-Pierre), Dublin (with onward service to Paris CDG – ASL Airlines France), Orlando  (WestJet) and Portland in Maine. There are also several international routes that are flown seasonally during winter from Halifax to destinations across the Caribbean, operated by carriers including Air Transat and Sunwing Airlines.

While Halifax has a varied collection of long-haul routes, particularly to Heathrow, Paris CDG and Frankfurt, one European hub service that the airport is keen to obtain is Amsterdam. Speaking to anna.aero recently at the 140th IATA Slot Conference in Kuala Lumpur, Richard Garson, ‎Manager, Air Service Development, Halifax Airport said: “Right now we are serving Heathrow, Glasgow, Frankfurt, Munich, Dublin, Paris CDG and Reykjavik/Keflavik in Europe, and the advanced bookings for this year are far stronger than last, so the market is showing that there is strong demand for more European services. There are currently five airlines operating between Halifax and Europe, so while we would like to see current airlines expand, we will happily welcome new business.” When referring to OAG Traffic Analyser data, around 8,700 passengers travelled indirectly between Halifax and Amsterdam in 2016, with 51% of passengers originating at the Canadian end of the city pair. The leading airports for connecting traffic in 2016 were Pearson (39% of traffic), Reykjavik/Keflavik (29%) and Heathrow (19%).

Between 12-14 September Halifax Airport will host Altitude East 2017, a forum that will be the largest and most significant of the year for Atlantic Canada’s airport, airline, and tourism professionals. The event will take place at the Halifax Marriott Harbourfront Hotel. Altitude East offers not only an incredible educational opportunity, with content highly focused on helping participants succeed in an extremely competitive and ever-changing environment, but also an amazing venue for networking and collaboration among airline industry stakeholders from around the world. To sign up for this year’s event, do so at this link. 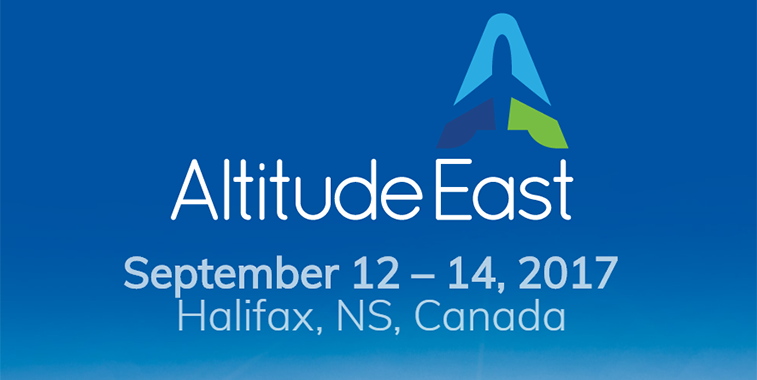 Save the date! Between 12-14 September Halifax will host Altitude East, a forum that will be the largest and most significant of the year for Atlantic Canada’s airport, airline, and tourism professionals. The event will take place at the Halifax Marriott Harbourfront Hotel. To sign up for this year’s event, do so at this link.