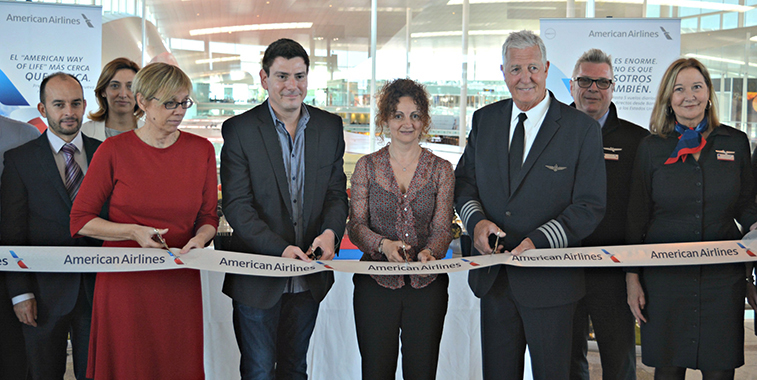 One recent addition to the international market from Chicago O’Hare for American Airlines is Barcelona. Seen cutting the ribbon at the launch in the Spanish city are: Sol de la Macorra, American Airlines GM, Madrid Station; Oscar Oliver, Commercial Director Aeroports de Catalunya; and Vanessa Requena, Head of the Cabinet, Barcelona Airport Director. While the international sector from O’Hare with American has increased by 1.9% this year, overall capacity in the non-US market has dropped 41% since 2007, while annual capacity in the domestic sector is 1.4% greater than it was in 2007.

American Airlines is Chicago O’Hare’s second largest airline, with it handling 35% of weekly seat capacity from the US hub this summer. It sits behind United Airlines which occupies 45% of seats. The market advantage that these two airlines have at O’Hare is evident, with the airport’s third largest carrier, Spirit Airlines, having only 3.9% of capacity, while fourth placed Delta Air Lines has 3.8%. In relation to the airline itself, O’Hare is the oneworld member’s third largest airport operation, with the US’ second city airport being home to 6.8% of the carrier’s weekly departing seats, with it sitting behind Dallas/Fort Worth (13% of weekly seats) and Charlotte Douglas (9.8%). O’Hare places just above Miami, with it handling 6.7% of weekly capacity, or around 2,800 weekly seats less than O’Hare.

In 2007, American operated over 2.04 million one-way international seats from O’Hare, however this year the oneworld member is scheduled to operate just 1.21 million, representing a drop in capacity over the past decade in the market of close to 41%. During the same period, the domestic market from O’Hare has seen its seat capacity rise by 1.4%. While the international market has suffered in recent years, it has returned to growth in 2017, with seat capacity in the non-US sector up 1.9% when compared to 2016. However, schedules for the remainder of 2017 could still be altered, so this result may change. 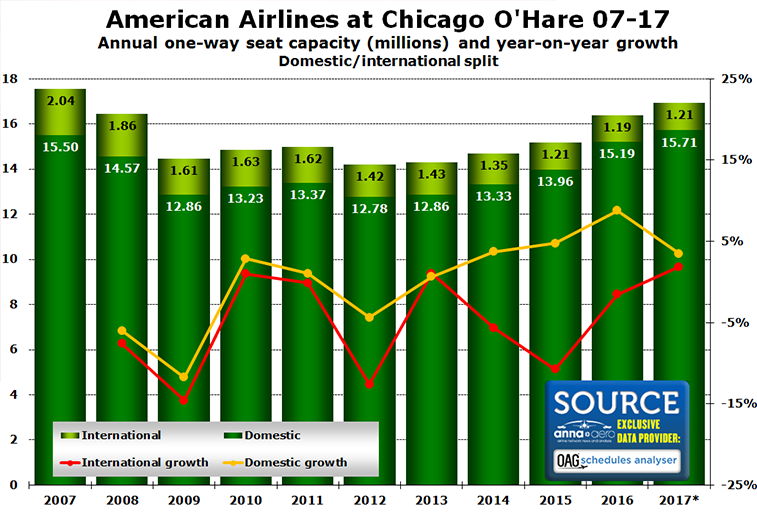 While the patterns for growth in both the domestic and international markets for American from O’Hare mirrored each other between 2007 and 2011, the former segment started to see the benefits as the carrier’s capacity re-surged from the US’ second city after 2012. The average year-on-year decline in capacity for the international market has been 4.6% since 2012, while for the domestic sector it has witnessed an average yearly increase of 2.8%. When we combine both markets together for a general overview of capacity, the average year-on-year increase since 2012 has been 2.1%.

During the past decade both American and United have lost market share at O’Hare. Back in 2007, American handled just over 36% of annual seats while United had nearly 48%. Last year the oneworld carrier had under 36%, a drop of 0.6%, while United’s was below 44%, a decline in market share of 3.8% when compared with 2007. So while both have lost ground to the airport’s other carriers, American has seen less of an impact than the Star Alliance member. 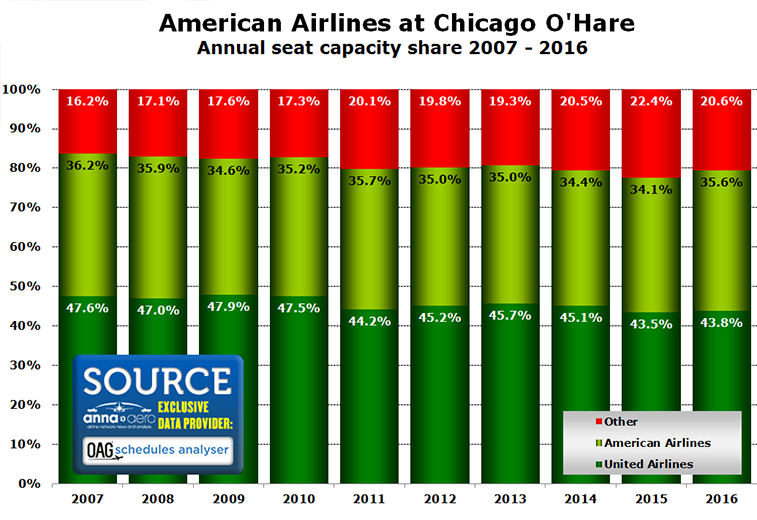 While American’s market share of seats at O’Hare is indeed down when cross-checked with 2007, between 2015 and 2016 the airline did see its market share increase by 1.5%, whereas United only saw a 0.3% upswing. However, with neither American or United planning much capacity growth over the next 12-18 months, and O’Hare preparing to welcome new airlines including Norwegian from London Gatwick, plus an increased presence from existing carriers such as LOT Polish Airlines, both could see shares drop once again.

American operates 138 routes from O’Hare, United serves 123 of them

Of the 138 routes that American is operating from O’Hare in 2017 when referring to OAG schedules, 123 of them are already flown by United. The former carrier has tried to hit back against its Star Alliance rival in relation to market coverage, with it starting six routes that United already serves last week. When sifting through the data, it takes until American’s 79th largest route from O’Hare – New York JFK – to find one where United does not offer a rival service. Along with JFK, other routes American operates without United competition from O’Hare include: La Crosse (82nd largest route); Manchester (85th); Dubuque (88th); Bloomington (92nd); Toledo (93rd); El Paso (106th); Sioux City (113th); Waterloo (114th); Barcelona (115th); Marquette (121st); Bismarck (123rd); Meridian Key (132nd); Ontario (134th); and Guatemala City (138th). 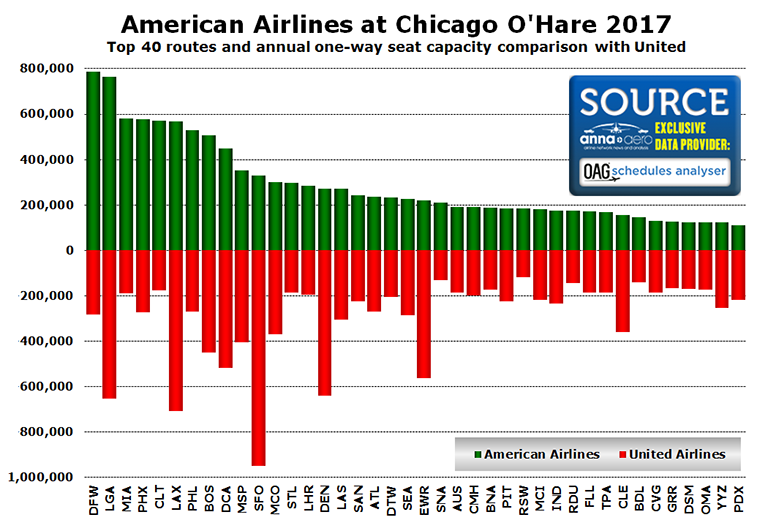 Of American’s top 40 routes from O’Hare, it has a greater amount of seats than United on 17 of them, with its strongest being its fifth largest connection – Charlotte Douglas – where American operates 76% of all seats operated on the city pair, United offers the remaining capacity. The second strongest connection is American’s leading route – Dallas/Fort Worth – where the oneworld member operates 74% of all seats, again split between the two rivals. 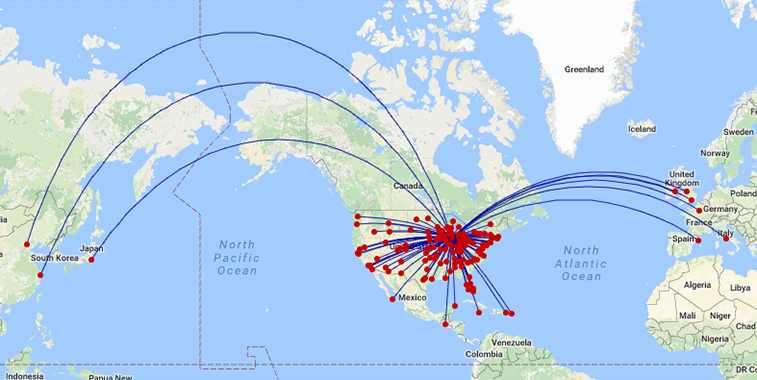 American Airlines S17 network from Chicago O’Hare. This year the oneworld carrier is offering 138 routes from O’Hare with United Airlines, the US airport’s leading carrier, offering direct competition on 123 of them. Overall, American’s annual seat capacity from O’Hare has risen by 3.4%, with international capacity up 1.9% and domestic 3.5%.