Qatar Airways launches flights between Doha and Skopje – anna.aero joins the airline and TAV Macedonia for the inaugural service 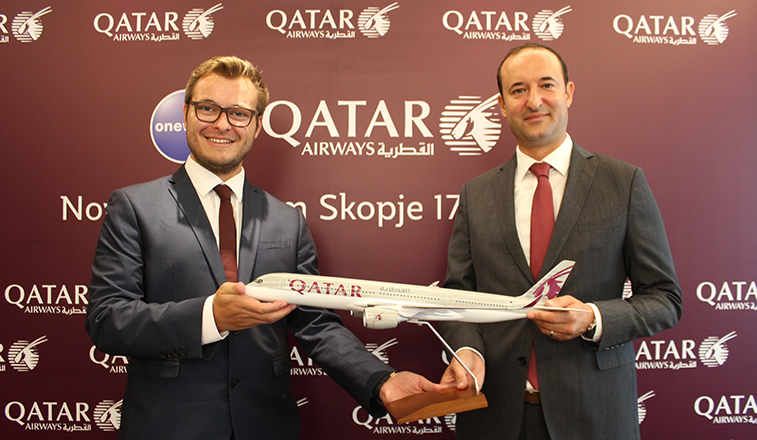 On 17 July Qatar Airways began a four times weekly service between Doha and Skopje, a sector that the airline will operate on its fleet of A320s. Seen celebrating the arrival of the MEB3 carrier to the Macedonian capital at the airline’s route launch press conference are Jonathan Ford, Assistant Editor of anna.aero and Alper Ersoy, GM TAV Macedonia.

Qatar Airways has added the Macedonian capital of Skopje to its network, commencing a four times weekly service from Doha that will be flown on the airline’s A320s. Launched on 17 July, the 3,309-kilometre route will operate on Mondays, Wednesdays, Fridays and Sundays. Commenting on the arrival of the carrier in Skopje, Qatar Airways CEO, Akbar Al Baker, said: “This summer is a busy one for Qatar Airways, as we continue our Eastern European expansion. Our new four times weekly service to Skopje is a much anticipated addition to our global route map, which will enable us to connect both business and leisure passengers to and from Macedonia. We look forward to welcoming our passengers on board flights to this captivating city.” Qatar Airways becomes Skopje’s first MEB3 and oneworld member carrier. The Macedonian capital becomes the airline’s 11th destination in Eastern Europe, with Qatar Airways already serving Baku, Belgrade, Bucharest, Budapest, Moscow Domodedovo, Sofia, Tbilisi, Warsaw Chopin, Yerevan and Zagreb. The carrier also has plans to begin flights to Prague, Sarajevo and Kiev Boryspil soon, while it already serves a further 30 destinations in Western Europe when referring to OAG schedules.

The route is not only seen as being an important outbound connection to destinations around the globe, but it will also improve access for key inbound markets with strong connections to Macedonia, in particular Australia, where more than 200,000 Macedonian Australians live. The Qatar Airways connections via Doha to Australia has now cut 10 hours off the shortest travel time currently available from Skopje, when before this new service (unless self-connecting) only a two-stop routing was available for passengers on one ticket. The evidence of the Australian connection was clear on the first flight to Skopje, with anna.aero observing many passengers on the flight connecting with the airline from Australia, with plenty coming from Melbourne in particular. Most Macedonians in Australia live in the southern part of the country. The first flight to Skopje, which had a 100% load factor, also had passengers from Singapore, Hong Kong and China.

It has been a busy week for Skopje Airport, not only with the arrival of Qatar Airways, but also due to the launch of a further three new routes by based airline Wizz Air. The ULCC has this week added Malta, Rome Ciampino and Vaxjo (all flown twice-weekly) to its ever-growing network at Skopje, with the airline now having four based aircraft in the Macedonian capital. With these route developments gains, it is no surprise to see that traffic from Macedonia has risen by 6.0% for the first six months of this year, when compared to the same period of 2016. A total of 860,130 passengers passed through both Macedonian airports between January and June this year.

anna.aero was invited by TAV to attend the launch of Qatar Airways to Skopje a couple of weeks ago. Fortunately for anna.aero, not only was it able to attend the launch, but it was also able to be on the first Qatar Airways flight from Doha to the capital of Macedonia, kindly arranged for them by the airline. This is the third Qatar Airways route launch that anna.aero has attended in the past 18 months. In March 2016, we covered the carrier’s inaugural service to Birmingham, while in February anna.aero travelled on the oneworld member’s first flight to Auckland, currently the longest commercial flight in the world. 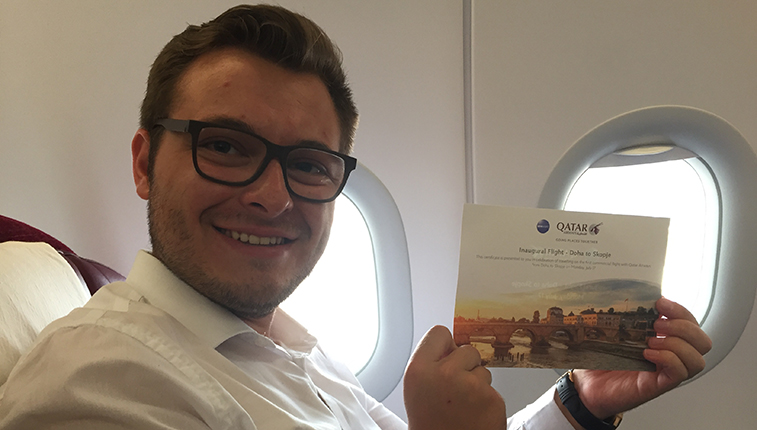 Talk about the long-way round! anna.aero’s Assistant Editor Jonathan Ford flew to Doha from London Heathrow on 16 July in order to then take the inaugural flight with Qatar Airways to Skopje. Here he is celebrating with his second Qatar Airways first flight certificate of 2017, having been on the carrier’s first flight to Auckland in February. The inaugural flight of Qatar Airways to Skopje departed from Doha Airport’s Runway 34L. Once airborne, passengers on the left side of the aircraft were treated to clear and splendid views of the Qatari capital, including the Museum of Islamic Art and Doha’s central district. Towards the end of the flight, which had a 100% load factor, the crew passed through the cabin to give passengers a postcard to say thank you for travelling on the first flight from Doha, including the date and inaugural flight number for passengers to remember. Time for the water arch salute. After a sector time of nearly five and a half hours, it was time for flight QR305, to receive its baptism salute from the Macedonian capital’s finest. The first passengers to disembark the aircraft were Ehab Amin, CCO Qatar Airways, who was greeted by a traditional bread called Pogača, and Vukica Krtolica Popovska, the Macedonian Ambassador to Qatar. After walking the red carpet they were met by officials from the airport, the Qatari Embassy in Macedonia, and the local government, including Goran Sugareski, Macedonian Minister of Transport and Communications, who greeted Popovska. 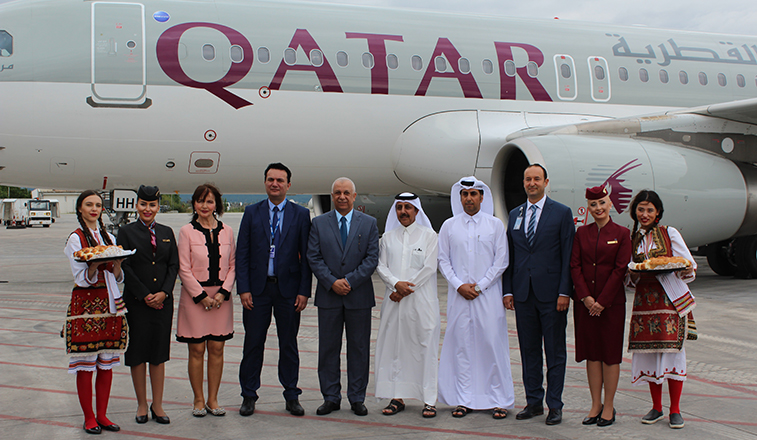 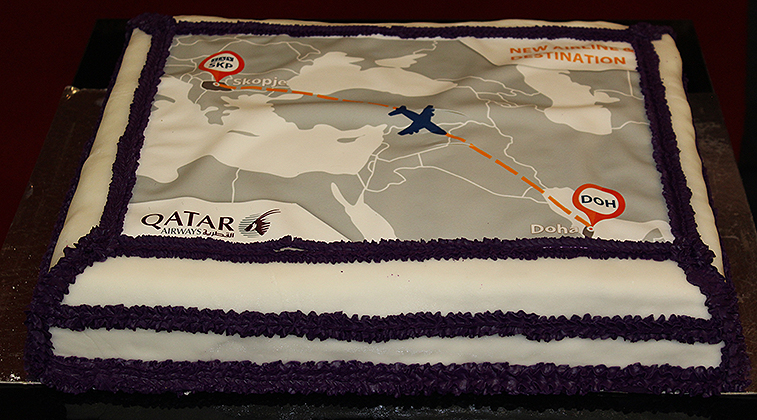 Once the official photos had been taken place on the apron it was then time to head inside and have a slice of cake, one of the key ingredients for a successful route launch event. The cake that was commissioned by Skopje Airport was a simple but effective design which shows the routing of Qatar Airways’ new route from Doha. 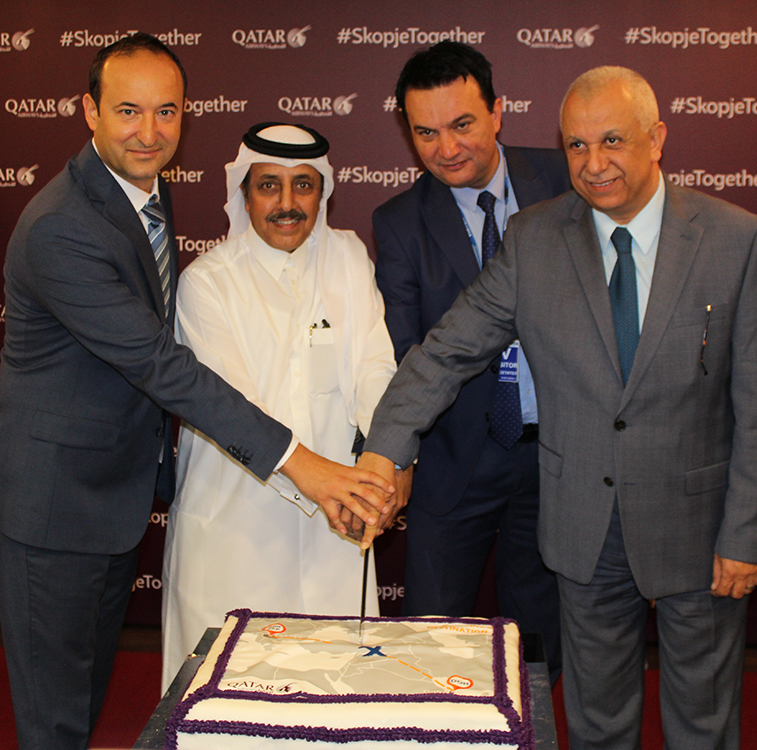 Seen conducting the cutting of the cake are: Alper Ersoy, GM TAV Macedonia; Hassan Bin Abdullah Zaid Al Mahmoud, Qatari Ambassador to Skopje; Goran Sugareski, Macedonian Minister of Transport and Communications; and Ehab Amin, CCO Qatar Airways. The cake was filled with chocolate and vanilla sponge. Once the celebrations at the airport had been completed, thoughts then moved to the evening’s gala dinner.

In the evening, after the celebrations had all taken place at the airport, it was then time for airline’s gala dinner which took place at the Marriott Hotel in the city centre. The gala dinner’s 100+ invitees including, Macedonian and Qatari VIPs, honoured guests from the travel industry and media, enjoyed a dazzling line-up of entertainment and a headline performance by famous Macedonian singer Jana Burceska who represented the nation at this year’s Eurovision song contest. Qatar Airways CCO Ehab Amin, said at the press conference: “I am delighted to be here today to celebrate the launch of Qatar Airways flights to Skopje, our new gateway into Eastern Europe from our hub at Hamad International Airport in Doha. Qatar Airways is proud to bring the five-star experience to the Macedonian capital, which is so rich in culture and history.”

Adding to Amin’s words, Alper Ersoy, GM TAV Macedonia, said: “Doha will be an exciting travel opportunity for Macedonian citizens, both in terms of leisure and business, but it will also become a new opportunity for Macedonians who live in Australia and New Zealand, to visit their motherland. Besides, we hope that Macedonia with its natural beauties and cultural-historical heritage, will be discovered as an interesting destination by Qatari tourists and businessmen. Presence of Qatar Airways in Macedonia as a brand, will make Skopje Airport even more attractive as a market, opening new possibilities for its development, while additionally it will contribute to further traffic growth.” 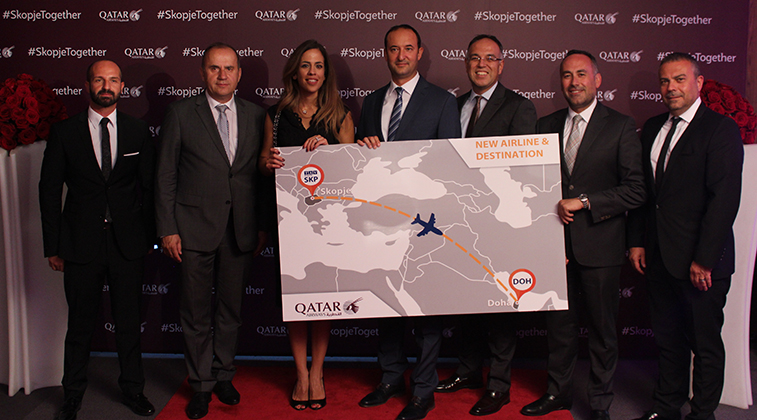 The gala dinner involved promotional videos of Doha, including it as a destination as well as a connecting hub, speeches, a live band, dancing and a performance by Macedonian star Jana Burceska who represented Macedonia at this year’s Eurovision song contest. Burceska apparently became the first person ever to be proposed to live on air during the competition according to the European Broadcasting Union. 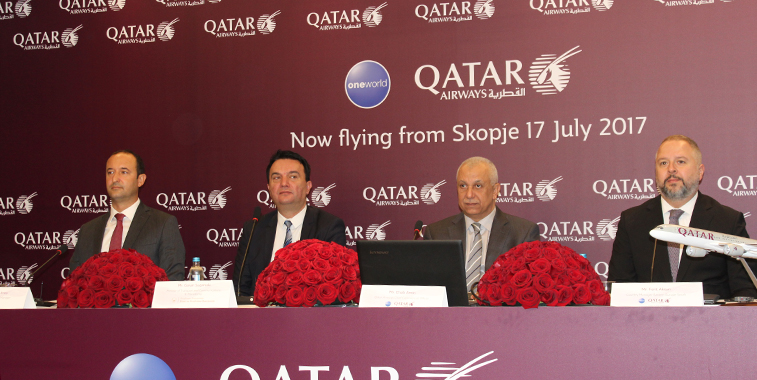 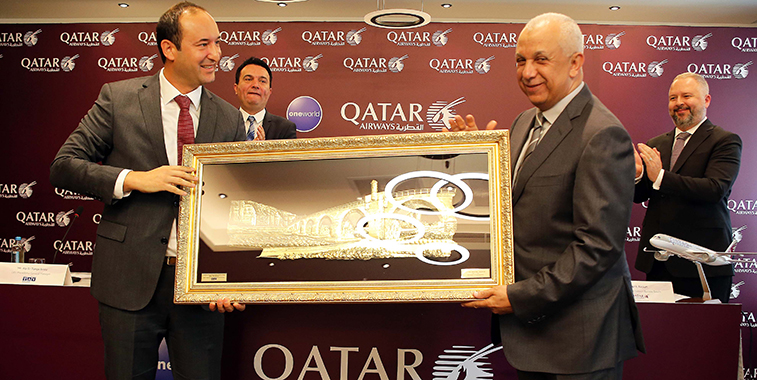 Once the press conference had ended, it was time for a gift giving exchange which was carried out by Alper Ersoy representing TAV Macedonia and Ehab Amin on behalf of Qatar Airways. The airport company presented the MEB3 carrier will a gold-sculpted image of the Skopje Stone Bridge, while the airline gave the airport a Swarovski Crystal statue. anna.aero would like to thank TAV Macedonia and Qatar Airways for allowing it to be part of this historic route launch, and we wish both the airline and the airport the best of luck with this new venture.