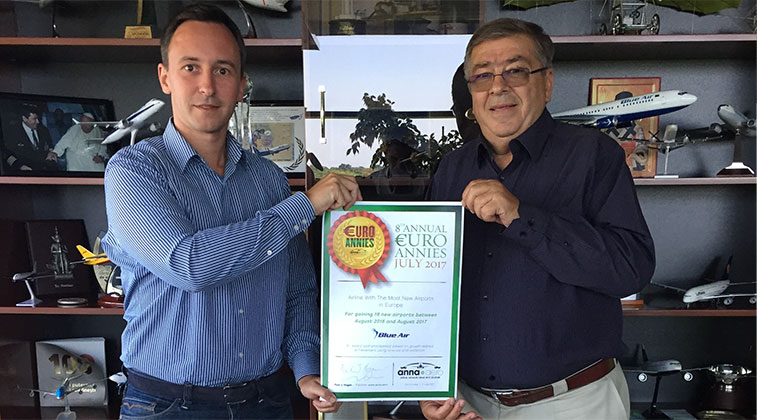 There is definitely a gap on the Blue Air CEO shelves for the Euro ANNIES certificate which the carrier was awarded for adding the most new European airports to its network in the period between August 2016 and August 2017. In the past year the Romanian hybrid LCC has grown from offering 43 airports to 62.

Following Part I last week – the airport awards ‒ we can now unveil the airline winners (and runners-up) in Part II of anna.aero’s eighth annual Euro ANNIES awards. Based purely on analysis of schedule data, these scientific awards are all about what the airlines have actually achieved. For those awards given to airlines relating to their network growth we have analysed OAG schedule data for the first week of August 2017 and compared it (where appropriate) with the first week of August 2016. Strictly speaking we are not calculating the number of new airport pairs, but the biggest net gain during the last year, to take into account those routes that may have been chopped by network planners for whatever reason.

We have four awards, and these are spread across four countries ‒ as it was last year, but some of the countries are different this time around. Unlike last year when Poland has managed to deliver an award-winning airport and airline, that feat has not been repeated this year, with the victorious carriers hailing from Albania, Ireland, Norway and Romania. Other countries represented among the runners-up are airlines in Hungary, Russia and Germany.

So, light the touch paper on the fireworks, and the first award goes to… 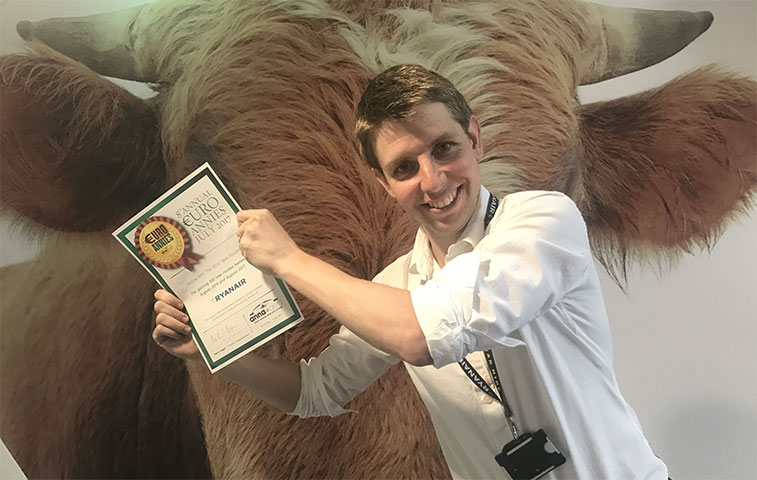 Moomentous. Udderly fantastic. Cowzat! (Cow) pat on the back. We can’t take any credit for these caption suggestions which all came from Ryanair’s PR guru Robin Kiely. In typical Ryanair style, he also added the following comment: “Given that Neal (McMahon, Director of Route Development) has never won anything, and as a fellow depressed Liverpool fan he has very little to celebrate generally, we’re off to the pub.” Of course, for last orders after another long, hard day in the office (if you’re reading MOL).

Basically Europe’s biggest airline is top of the pile for what it does best, launching new routes. The figures are staggering, especially when you consider that it delivered exactly double the number of new routes of second placed Wizz Air (which won this category in 2016). The #1 spot was achieved for starting 362 new routes (net – it will have started more, as undoubtedly it will have dropped some along the way too) in the 12 months to August – presumably one for every day of the year except Christmas Day, St Patrick’s Day, and obviously during the Cheltenham Festival, when clearly no work is done at Ryanair. 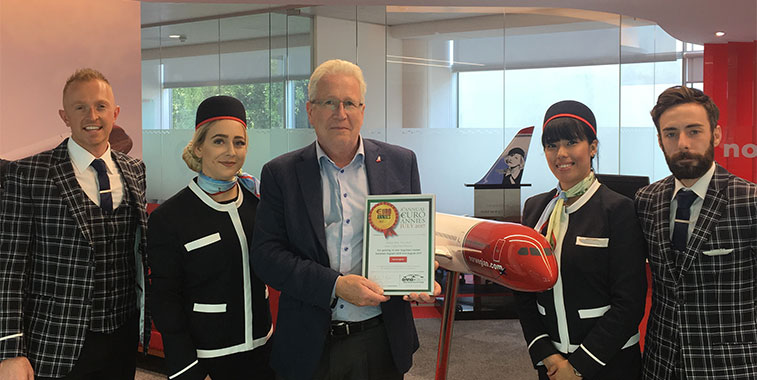 COO of Norwegian UK, Lennart Ceder, along with some of the airline’s long-haul crew, poses with the LCC’s latest award at its UK HQ at London Gatwick. The LCC currently offers six long-haul routes from its London base, with Denver (16 September), Seattle-Tacoma (17 September) and Singapore (28 September) to be added later this summer, as well as Buenos Aires Ezeiza (14 February), Chicago O’Hare (25 March) and Austin (27 March) next year.

Using the same criteria as in Part I of the Euro ANNIES, (long-haul = a route longer than 4,500 kilometres) there is another LCC winner for the category of the biggest net gain in long-haul services from European airports – with the 2016 winner claiming the title again (it also won this category in 2014). Growing by a net of 14 additional long-haul routes since last August is Norwegian. These are spread across a variety of the airline’s long-haul bases, new and old – Barcelona (to New York Newark, Los Angeles and Oakland); Paris CDG (to Orlando); and Copenhagen (Oakland); as well as the latest 737-800/MAX operations from Belfast Internatonal, Bergen, Dublin, Edinburgh, Cork and Shannon. However, there were two route casualties along the way, Stockholm Arlanda to Las Vegas and Bergen to New York JFK. The Scandinavian LCC beat-off Russian carrier VIM Airlines, which added 10 long-haul services to its network in the last year, including nine new routes from Moscow Domodedovo. 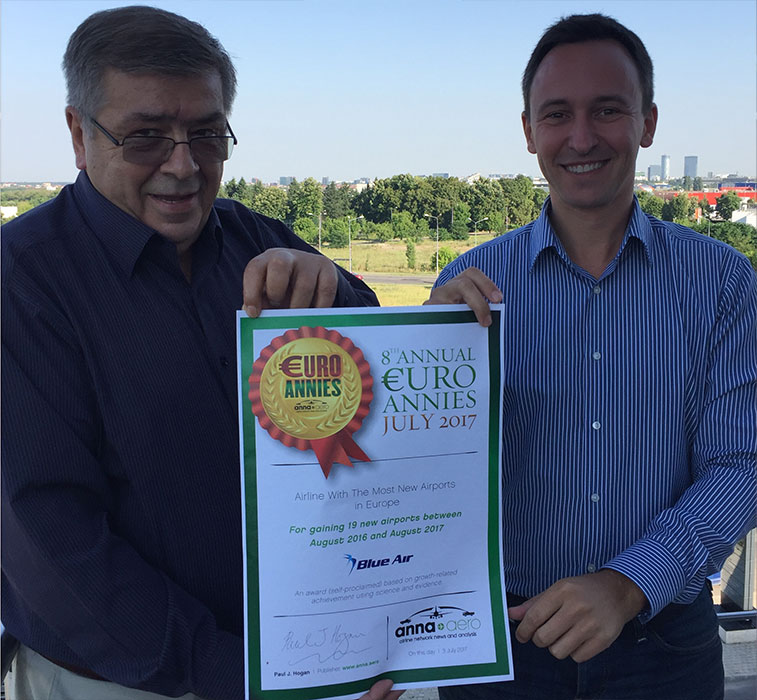 Taking a breath of fresh air to calm down after being presented with Blue Air’s first ever Euro ANNIES certificate is the airline’s CEO, Gheorghe Racaru and its CCO, Tudor Constantinescu. Last year this title was won by a legacy carrier, with LOT Polish Airlines securing the win with a net gain of 18 new European airports.

We know that Blue Air has been busy adding new airports (19), but this time in a less scientific way than the research undertaken by our data elves – by the number of Fire Truck Water Arches (FTWA) that the Romanian LCC has received so far in 2017. With 13 FTWAs so far, that is an impressive result which has only been beaten by one other airline – no not by ‘Airline With Most New Routes’ winner Ryanair, but the category’s runner-up Wizz Air, with 17. Second place in this section was Eurowings (which includes germanwings), which was three behind Blue Air with it adding 16 new airports to its network since last August.

This is perhaps the most controversial category of the four being awarded this week. Other airlines had provided more weekly seats than the winner – Albania’s Albawings – but were disqualified for the following reasons: Wind Rose Aviation – apparently founded in Ukraine in 2003 as a charter airline, now appears to be submitting regular scheduled flight data to OAG; Mistral Air – a very similar story to Wind Rose, founded in Italy in 1981 as a charter airline, started submitting regular scheduled flight data to OAG from 8 August 2016, but our data looks at 1-7 August. So was again disqualified. Second place to Albawings is one of its competitors, Italian LCC Ernest, which flies predominantly to…Albania!

How have the previous winners of this category performed? Are they still flying? The best way to describe their success is a ‘mixed bag’. So while the winners from 2016 (Cobalt) and 2015 (Pobeda) are still very much around, others like Atlasjet Ukraine (2014) and Eagles Airlines (who? 2012) have perhaps been less successful in the years after their momentous Euro ANNIES wins. Let’s hope that Albawings is in the first bracket of airlines and not the latter.