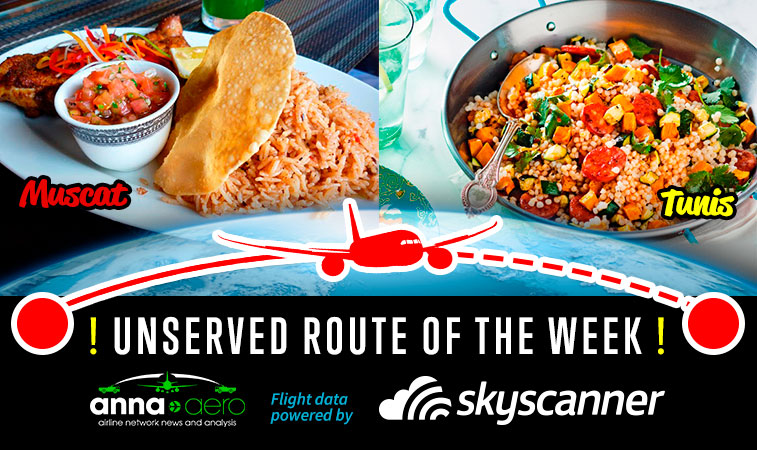 Yum-yum what a tasty offer. No, not the traditional dishes of Oman (Machboos) or Tunisia (couscous), but the availability of a city pair like Muscat to Tunis. Its amazing that a capital city to capital city link between the Middle East and North Africa is still unserved, hopefully with this Skyscanner search data now made public, that situation will not go on for much longer! Now what’s for lunch…

With over 30,000 searches in the last 12 months, a potential city pair from Muscat to Tunis has been identified as this week’s “Skyscanner-anna.aero Unserved Route of Week” – a powerful analysis based on aspirational data captured from the Skyscanner.net flight comparison site used by +60 million unique visitors per month. “As per the traffic rights agreement between Tunisia and Oman, both share unrestricted weekly frequencies from Muscat to Tunis, making it easier for negotiation with the Omani CAA for fifth freedom and code-sharing flexibility,” confirms Samer Ahmed Al Nabhani, GM Commercial Operation and Muscat International Airport, Oman Airports Management Company. 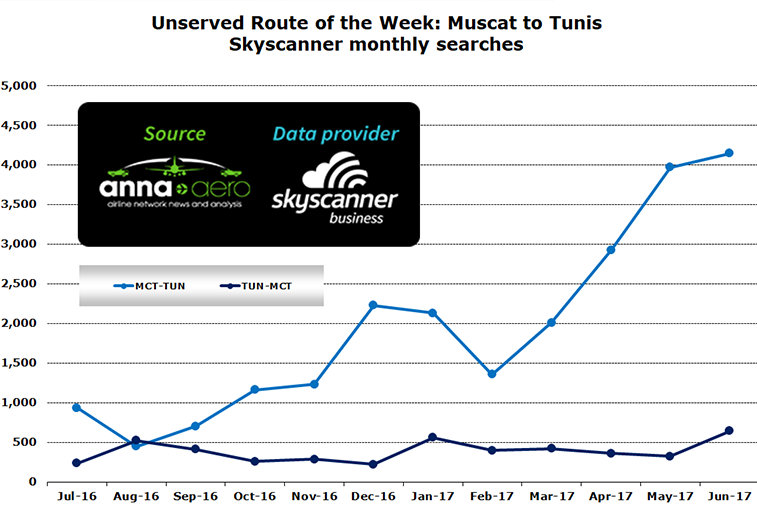 anna.aero orders Oman Air or Tunisair to try this route

Skyscanner demand on this week’s unserved route shows a significant bias towards the Muscat end of the city pair, with a 83/17 split, so on this basis we looked at potential carriers at the Omani end first. Unsurprisingly, flag carrier Oman Air is the biggest airline at the airport, with 59% of weekly seats according to OAG data for the week commencing 17 July. The carrier currently has network of nearly 50 non-stop city pairs, but strangely only one currently in North Africa – namely a 10 times weekly service to Cairo. Having consulted anna.aero’s new route database, the airline has no plans to add any new city pairs in W17/18 or S18 either, so Oman Air clearly has a need for some fresh impetus to its route development strategy, and hopefully with this Skyscanner data now being made public, Tunis could be its next welcome addition.

The next three largest carriers at the Omani capital city airport are all overseas airlines, led by Qatar Airways (4.3% share of weekly seats), flydubai, (3.9%) and Emirates (3.9%), so these operators can be ruled out as being an alternate provider of a new service to Tunis. The up-and-coming new entrant and fifth largest (3.7% share) airline in Muscat – local LCC SalamAir – is a likely candidate to be able to muster a service to the Tunisian capital. Its fast-growing, but fledgling network does offer regional international connections to Dubai, Jeddah, Madinah, Sialkot and Karachi, but no routes are presently offered to North Africa. On this basis, it would seem that either Omani-based carrier could take-up this unserved route opportunity, the only question is, which one will make the first decisive move.

Skyscanner has released its own analysis examining the IATA’s main findings reinforced with the travel search engine’s own data insights. In short, Skyscanner’s analysis supports IATA’s position that overall traveller growth remains steady, and sheds further light on data from two particular regions: North America and the Middle East. Skyscanner points to solid transcontinental travel demand from the US, especially to Europe where destinations such as Reykjavik are now the fastest growing destination by far from many several key US hubs. Europe and Far East dominate the fastest growing destinations from many US cities, while India and Philippines are popular from the Middle East.

Contemplating the Tunisian end of the route, the potential carriers in Tunis were considered next. The airport’s capacity is again led by its national carrier, Tunisair, which with is 40,630 weekly seats controls around 49% of capacity. The airline’s current 49-destination non-stop route network only has a small proportion of flights to the Middle East (just 912 weekly seats), with just three city pairs – to Beirut (four times weekly), Erbil (weekly) and Jeddah (weekly). So while other Middle Eastern hubs are served from Tunis, like Dubai (six times weekly; Emirates) and Doha (daily; Qatar Airways), and therefore offer a more challenging market environment, in operating to the Omani capital Tunisair could at least have unfettered access to the Muscat hub.

“Tourism is booming in Oman, no doubt helped by our position as a politically stable nation in the region. The Omani government’s huge investment in hotels, resorts, convention centers and infrastructure, successfully puts Oman on the global map as one of the prosperous new leading countries of the Middle East,” says Al Nabhani. “Passengers from Tunis also continue to grow year-on-year, driven by business passengers, tourists and education travel purposes.”

When looking at the previous year of search data, the busiest month for potential traffic flows (for both directions on the route combined) is June 2017, with nearly 4,800 searches, over 3,800 higher than the lowest monthly figure, which was recorded in August 2016 (1,000 searches). The seasonality profile of this search data is more extreme than the last Unserved Route of the Week (East Midlands to Nice) with the low-month traffic representing 20% of the highest month. According to OAG Traffic Analyser, because there is no direct service, the top three connecting options chosen by those passengers who did book travel between Muscat and Tunis in the last year indicates that the majority of connecting travellers used Dubai (36%), Doha (34%) and Istanbul Atatürk (27%). A total of 12 different airports were used by transfer passengers in the past 12 months to fly between the two capital cities. “Tunisian airlines will have the advantage to connect passengers through Jeddah, Madinah, Cairo and Beirut to Oman through their networks,” adds Al Nabhani.

With a lack of direct services, travellers between these two cities have clearly got used to these one-stop alternatives. However, the market demand is extremely buoyant – as the graph below shows, with 9.4% of the Skyscanner searches for these indirect Muscat to Tunis services converted into ticket sales – that’s more than the average 8.0% achieved for Skyscanner conversion/purchase rates for all direct routes available from either Muscat or Tunis. However, with nearly 30,000 annual searches, a two or three times weekly service should be immediately viable for the airline selecting to start this potential city pair. “Both countries share common grounds in language, similar cultures, similar food, hospitality, politically safe, and the stunning attractions Tunis has to offer for all age groups,” concludes Al Nabhani. 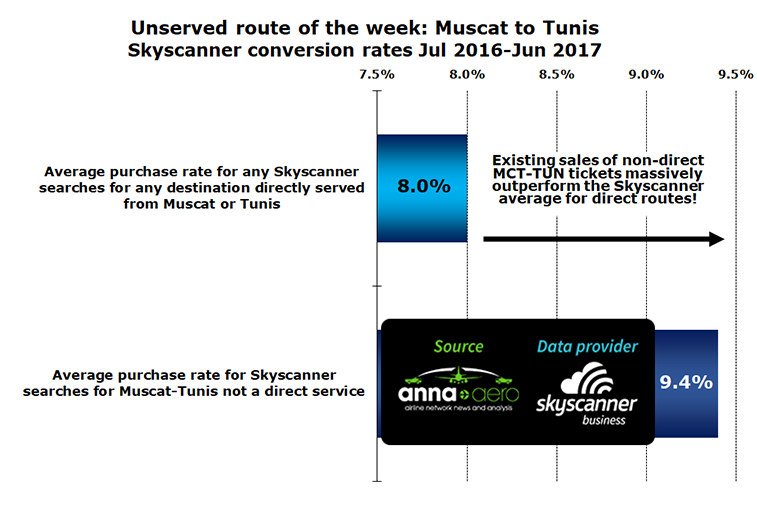