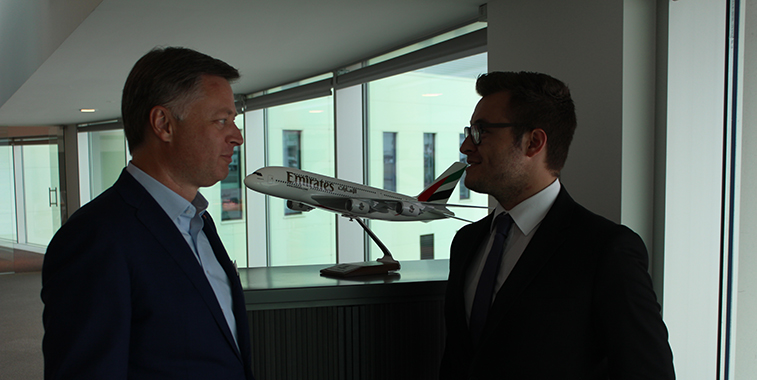 anna.aero recently travelled to Brussels to meet with the airport’s CEO Arnaud Feist. Here he is in the airport’s offices chatting to anna.aero’s Assistant Editor Jonathan Ford about how the airport is expecting to pass 24 million passengers in 2017. Among other highlights this year are the return of Mumbai services, with Shanghai flights resuming this winter.

Serving the capital of Belgium and indeed Europe, Brussels Airport is located at the heart of a population of 1.8 million people (Brussels’ metro area), with the city being part of a large conurbation which extends between Brussels, Antwerp, Ghent, Leuven and Walloon Brabanthas, with these combined having a population of five million. The airport this year is on track to welcome over 24 million passengers, which would make it a record-breaking year for the airport. With that, anna.aero recently travelled to the Belgian capital to meet with the airport’s CEO Arnaud Feist to learn more about growing Brussels.

Over 24 million passengers in 2017 predicted

In 2017, Brussels Airport should surpass 24 million passengers. Excluding statistics for 2016 (due to the events of March last year), when we compare January-June 2017 with January-June 2015, we see that Brussels’ traffic has increased by 6.3% (over 687,000 more passengers). If this level of growth is maintained for the remainder of 2017, then Brussels should easily pass 24 million passengers for the year, with around 24.8 to 24.9 million passengers predicted. “2017 will be a record-breaking year for Brussels,” comments Feist. “Since November, every month has been a record for passenger traffic, and we expect this to continue throughout this year,” he adds. Months highlighted in light green are those following the events that happened in March 2016. 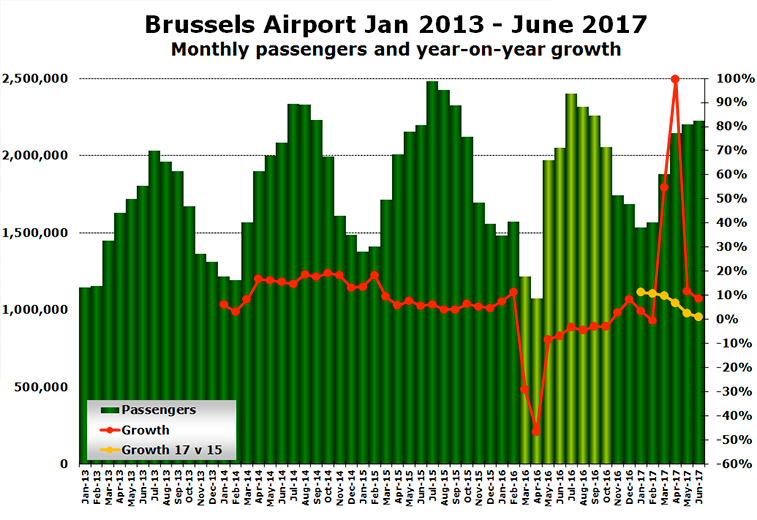 Taking a closer look at the airport’s passenger statistics reveals that the growth is not just in traffic to and from Brussels. When analysing connecting traffic for the period between January and June, it has risen by just under 18% when compared to the same six months of 2016. When we compare 2017’s figures with those from the first six months of 2015, we see that traffic in the sector has grown by a little below 19%, showing that Brussels’ operation as a hub is intensifying. 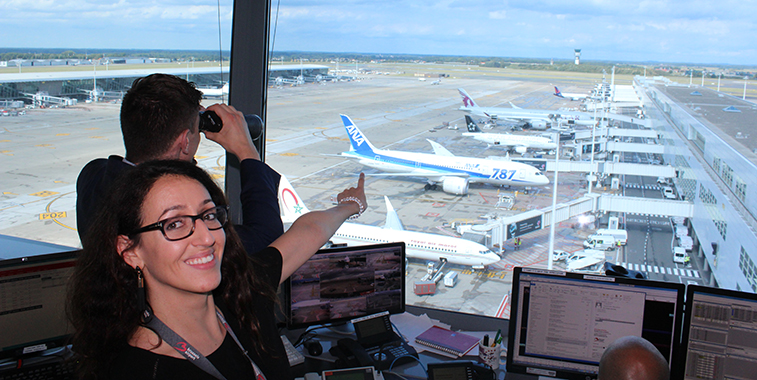 Wow, that’s quite the line-up! Seen gracing the tarmac at Brussels airport is a number of carriers that have had many developments at the airport during the past 18 months. The most significant is All Nippon Airways which in October 2015 began a daily service from Tokyo Narita. We also see a Qatar Airways A350, with the aircraft type having recently been introduced onto the airline’s service from Doha. In the far distance we also see a CityJet SSJ 100 which is currently operating for Brussels Airlines. Seen over-viewing their valued customers are the airport’s Manager Aviation Marketing, Geert Van Dessel, and Airline & Trade Marketing Manager, Tania Ter-Ossepiantz.

It is of course no surprise to see that Brussels Airlines is indeed the largest carrier at its home base with the Star Alliance member accounting for 36% of weekly one-way seat capacity from the airport this summer, up from a market share of 34% which it had in S16. The carriers highlighted in light green are all members of Star, with these airlines combined increasing their seat capacity from Brussels by 7.6% since last summer. TAP Portugal (14% individual seat capacity growth); SWISS and Brussels Airlines (both 11%) are the three leading carriers for growth from Brussels among the top 12. 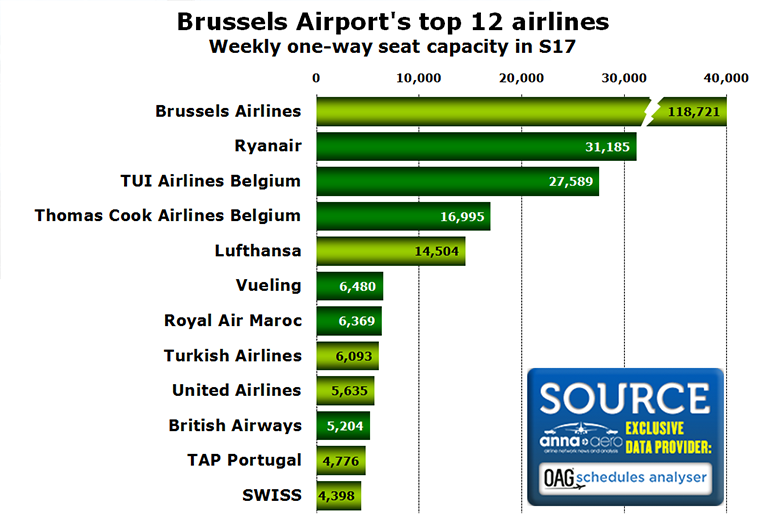 The biggest new airline at Brussels in the past 12 months is WOW air, which recently began services from Reykjavik/Keflavik. With the launch of this service, it now means that Brussels is able to offer passengers a low-cost carrier option to travel via the Icelandic hub to North America. anna.aero asked Feist how important it was for Brussels to have WOW air, to which he replied: “WOW air is growing fast, it is incredible what they have done and we wanted a piece of the action. We want to offer our passengers a different type of product so they have greater options for travel, and with this new route to Iceland, we can give them this low-cost option as well as our many direct services to North America. Not just that, but Iceland is a booming tourism destination as well, so this also complements Icelandair’s service and adds capacity to an ever-growing market from Belgium.”

Hainan expansion with the return of Shanghai

One of the biggest gains for Brussels this year is the return of Hainan Airlines services from Shanghai Pudong, a route that it has not operated since December 2011. The carrier will return the route to the Belgian capital on 25 October, ending a six-year hiatus on the 9,020-kilometre sector, with it currently scheduled to operate the new connection three times weekly on 288-seat 787-9s. “Hainan Airlines arrived at Brussels in 2006 with a three times weekly service from Beijing which at the time was flown on 767s. This route has now grown to a daily service during summer flown on A330-300s, so it is great to see them expand further with the relaunch of flights to Shanghai,” comments Feist. Looking at the current schedule, services to Beijing will operate four times weekly this winter, the same that was offered in W16/17, so with Shanghai’s arrival, this will be the first winter where Brussels has had a daily service to China, with it having had six weekly flights in winter when Hainan last operated Shanghai.

While the importance of growing links to China is important for the tourism sector, with Feist telling anna.aero that it is great for both inbound and outbound tourism, the connection is also much-needed for business links. Looking at statistics published by Visit Brussels for 2015, of the overnight stays in Brussels for Chinese visitors, 42% were in the city on business, with overnight stays in the Belgian capital by Chinese nationals increasing to over 130,000 visitors that year.

Return of Mumbai a big boost for the airport

One recent long-haul addition that was vitally important for the airport was the return of India to its network, with Brussels Airlines now serving Mumbai. “It was not a surprise that Jet Airways left the market, it is something that we were expecting,” comments Feist, with the Indian carrier relocating its European feeder hub to Amsterdam. “So with its departure we asked, what can we do to fill the gap? We worked with Brussels Airlines to start the route, which could not have been inaugurated sooner,” insists Feist. “It has been three months since the airline began services and now most of the flights are full. India is the third largest continental market from Belgium so more services are most certainly needed.” Feist also mentioned that Delhi was a route of priority for the airport.

However, the airport is actively pursuing more routes in the long-haul sector to other areas outside of China and India, with Feist confirming to anna.aero that the airport is hoping to gain services to Hong Kong, Manila, Seoul Incheon and Singapore in Asia, more to Africa, with Bogota and Sao Paulo in South America also targets. “While we are seeking many long-haul services, it does not mean that we are not committed to enhancing our European network,” informs Feist. “One thing that is important to us is to see a strengthened European operation with Brussels Airlines and Star carriers to help feed long-haul routes that we currently have, and new ones we attract in the future.” Unlike most of Europe’s major hubs, Brussels has a lot of available capacity and slots available, making it an attractive route proposition for many global airlines wanting to expand their presence in one of Europe’s most important cities. “Brussels is a great market opportunity for carriers. We have a great mix between business and leisure, and passengers love using the airport,” insists Feist. 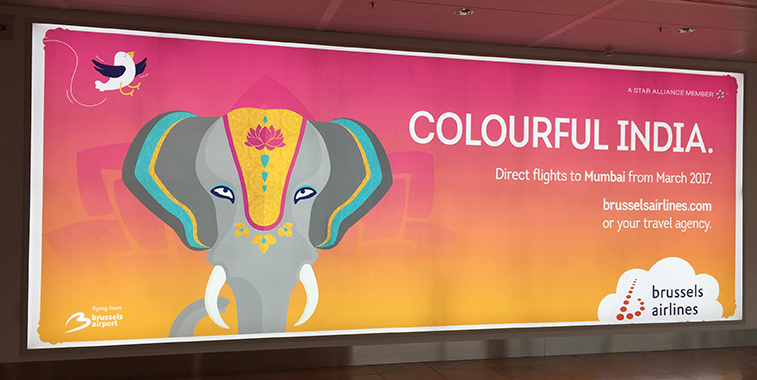 When walking around the terminal at Brussels, anna.aero noticed an eye-catching advert for Brussels Airlines’ new route to Mumbai which began in March. Speaking to anna.aero, Feist said that: “Brussels is a very efficient airport with plenty of room, and we have plenty of capacity. Not only do we have room, but we can give airlines good marketing support for new services and help them to develop their business in our catchment and all over Belgium.”