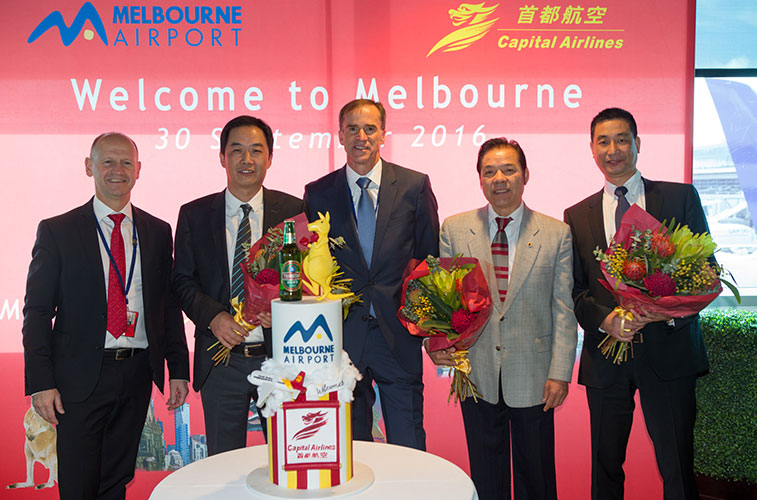 Australia’s domestic air travel market is not exactly the world’s most dynamic. When we last looked at the market around a year ago domestic traffic had grown by 1.7% in the previous 12 months. Well, in the subsequent 12 months (to May 2017) it has grown 1.6%, to 59.2 million passengers. This modest growth on RPT (Regular Public Transport) services was achieved thanks to a 1.3 percentage point improvement in load factor, as available seats actually fell by 0.3%.

At a route level, of the top 10 domestic city pairs, eight reported growth according to the latest BITRE statistics. Leading the way was the Gold Coast-Melbourne route (+5.5%), followed by Hobart-Melbourne (+5.4%). The two routes showing a decline both involved Perth, with Sydney traffic down 1.2% and Melbourne demand falling by 3.1%. The busiest route, between Sydney and Melbourne, grew by 2.0% to 8.94 million passengers.

Among the top 50 routes the only one reporting double-digit growth was the Sydney to Ayers Rock connection, which saw demand jump 13.9% to 191,300 passengers. The route is served by both Jetstar Airways and Virgin Australia. The biggest drop was on the Perth-Karratha route where passenger numbers fell by 16.7% to 464,500. Routes in Western Australia have been hit by the downturn in the mining industry which is a key driver of demand in that region. Bars highlighted in red below indicate months where the domestic market witnessed a downturn in growth when compared to the same month the year before, with the last month to see a downturn in traffic being February this year. 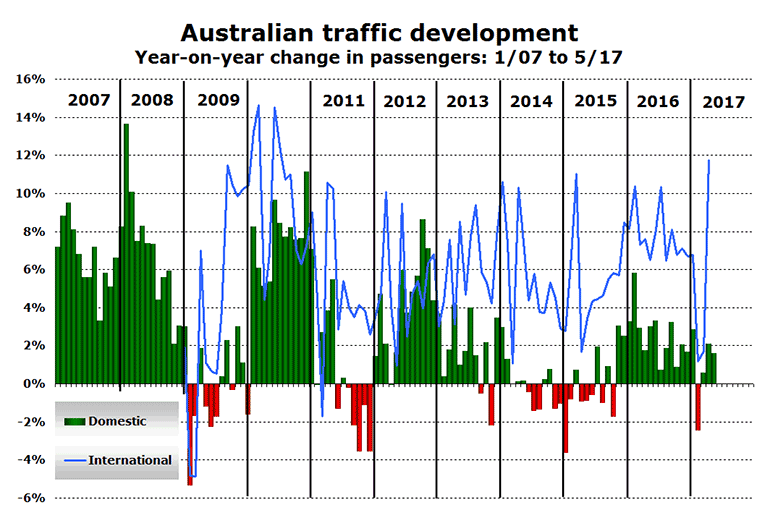 International traffic to Australia up 6.8% in the year to end of April 2017

The country’s international air travel sector showed faster growth, up 6.8% to 38.3 million in the year ending April 2017. While the top 10 city pairs saw growth of just 2.3%, all other city pairs grew by 8.9%. Sydney-Auckland remained the busiest international route, with demand up 1.6% to almost 1.6 million passengers. Among the top 10 routes, the fastest-growing was Melbourne to Singapore (up 9.8%) while the fastest-shrinking was Sydney to Los Angeles (down 5.3%).

Among Australian airports Sydney leads the way with 15.4 million international passengers (up 6.9%), followed by Melbourne with 9.9 million (up 7.8%) and Brisbane with 5.5 million (up 4.5%). Perth reported almost 4% growth to 4.4 million, while Gold Coast reported 11% growth to just over 1.1 million passengers.

According to the latest BITRE figures for April 2017, Qantas has just 16.5% of the international market followed by Jetstar Airways (8.9%). Emirates is third with 8.3% followed by Singapore Airlines (7.9%) and Air New Zealand (6.7%). Compared with last April, AirAsia X has seen the biggest gain, growing its share of the market from 3.5% to 4.3%. 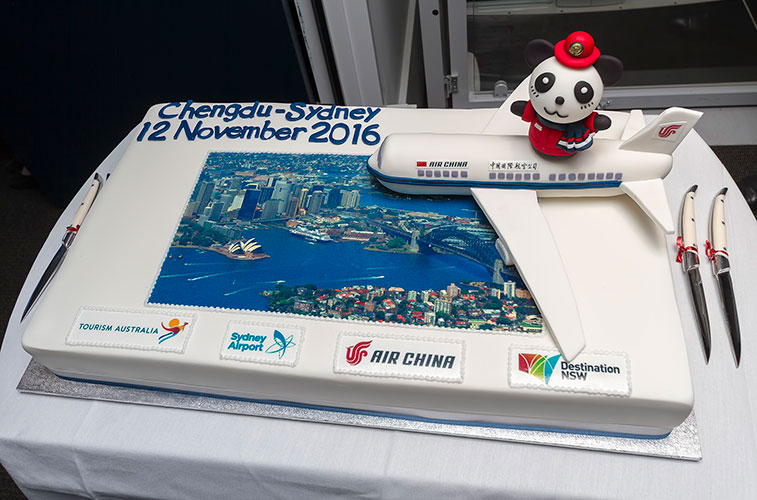 On 11 November 2016 Air China launched non-stop service between Chengdu and Sydney. The 8,711-kilometre route is flown three times weekly by the Star Alliance carrier. This cake celebrated the first return flight on 12 November. Passenger numbers on routes between Australia and China have grown by 23% in the last 12 months.