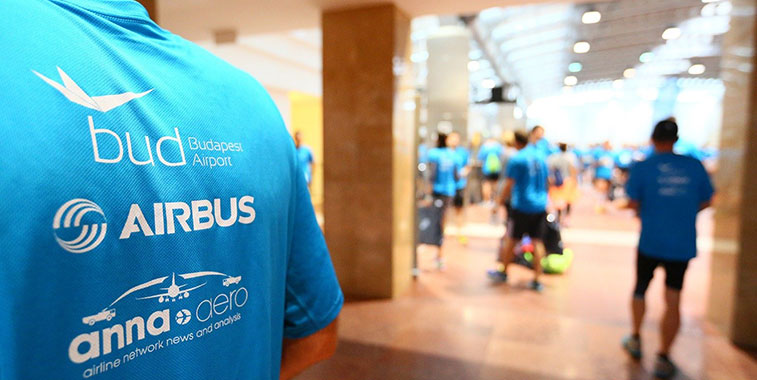 From early on Airbus acknowledged the importance of the Budapest Airport-anna.aero Runway Run. Stepping up as headline sponsor for a third year, the global manufacturer continues to be a huge supporter of the leading sporting charity event for the global aviation community, while also signing up another 12-strong team as the returning “Fastest Aviation Enterprise”.

As a host of major Airbus users register to take part in the 5th Budapest Airport-anna.aero Runway Run including Wizz Air, Aer Lingus, Emirates and Qatar Airways, the global manufacturer has registered another 12-strong team in the hope to be named ‘Fastest Aviation Enterprise’ once again. 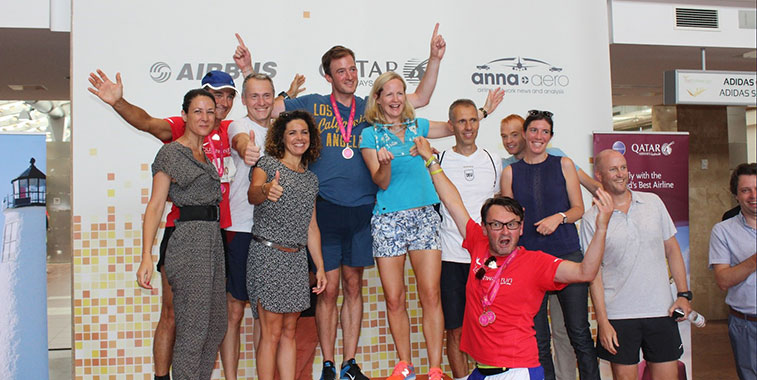 Headline sponsor Team Airbus, last year captained by Sinead Cormican, HO Contracts Europe, Africa & Pacific (holding trophy), ran fast enough to secure ‘The Fastest Aviation Enterprises Team 2016.’ “It really wasn’t fixed! We were as surprised as everyone else – but they do have some really skinny people on their team,” said anna.aero publisher, Paul Hogan, (seen here dancing with joy).

Airbus is once again the headline sponsor of this year’s charity race on Budapest Airport’s runway 13R-31L, taking place at 11:00 on Saturday 2 September. Speaking back when the company first became involved in the event Chris Buckley, EVP Sales Europe, Airbus enthused: “We wholeheartedly applaud the aims of the Budapest Airport-anna.aero Runway Run as a means of bringing airlines, airports, and all the aviation community together in a great sporting event, which also benefits worldwide child cancer charities and other great causes.”

Think you can defeat any of the current trophy holders and run off with titles such as ‘The Fastest Airline in the World’, ‘Fastest Aviation Enterprise’ or ‘Fastest 10km Runner’? Or maybe you just need the perfect excuse to get motivated and start running? The air transport industry’s premier charity event could be exactly what you’re looking for.

A note from the host organiser…

“We see that more and more airports are organising similar events,” explains Jost Lammers, CEO, Budapest Airport. “We’re proud to have pioneered such an occasion that people wish to copy but we never forget our main aim which is to collect as many donations for our charities as possible, together with our sponsors and partners,” he added. 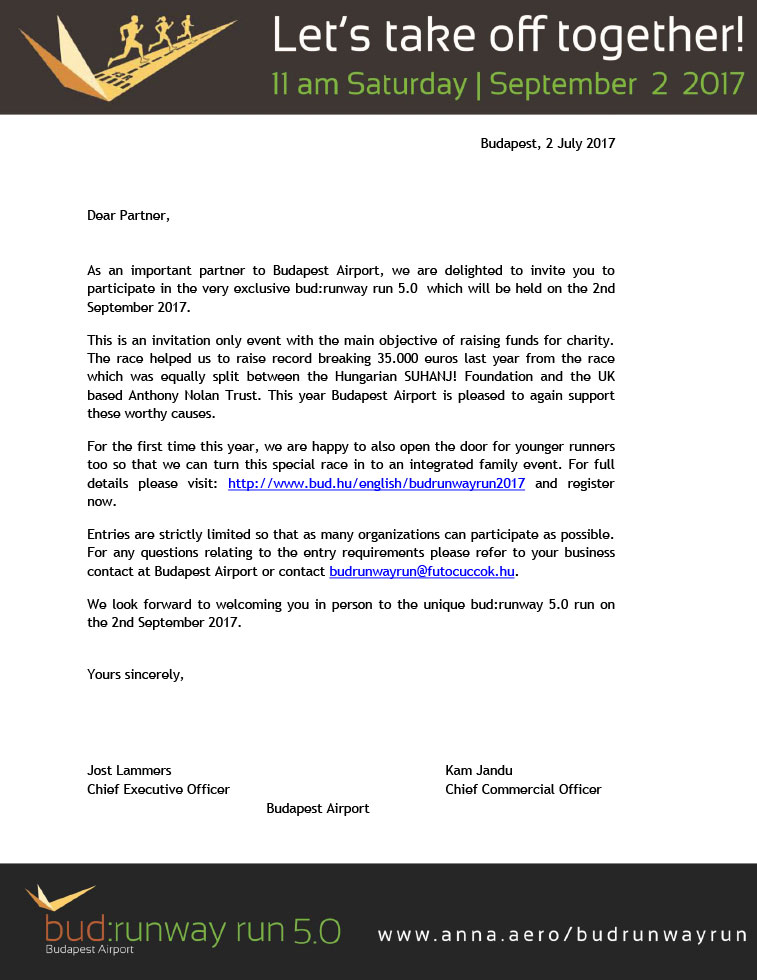 The personal touch: Budapest Airport’s CEO Jost Lammers and CCO Kam Jandu – who both take part and don’t just cheer from the side-line – personally invite all aviation partners to join them on the runway on Saturday 2 September.

Remember: All entry fees – just €50 – are entirely donated to international child cancer causes and a Hungarian charity assisting the inclusiveness of handicapped people in sports, and every runner gets a goodie bag too!