Jeddah Airport’s capacity increased by 13% in 2016; international market growing twice as fast as domestic; new terminal due to open Q1 2018 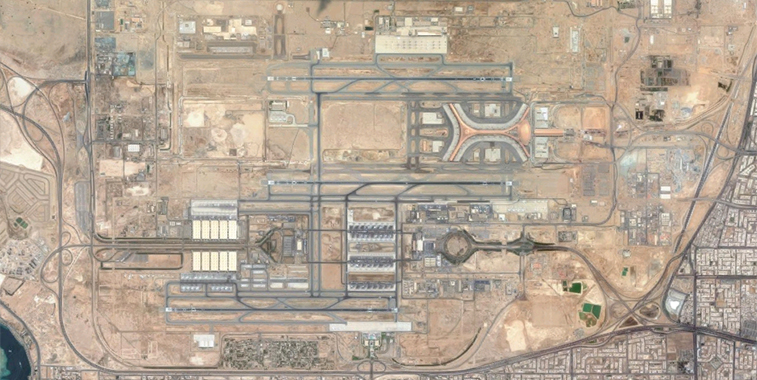 The new King Abdulaziz International Airport three-stage development started in September 2006, and is currently scheduled for completion in 2018. The project is designed to increase the airport’s yearly capacity from 30 million to 80 million passengers. anna.aero estimates that the airport handled around 34 million passengers in 2016. Since 2007, the airport’s average year-on-year increase in annual one-way seat capacity was 11%.

Jeddah Airport is the third largest in the Middle East when referring to annual seat capacity, with the airport registering nearly 22.7 million annual one-way seats in 2016. This places it behind Dubai and Doha, but ahead of Abu Dhabi. To give context in relation to numbers, Jeddah is currently around 40% the size of Dubai when looking at seat capacity, with the UAE mega-hub registering 56.3 million one-way seats last year. Doha has 14% more annual seats, while Jeddah is currently operating 36% more seats than Abu Dhabi.

Average year-on-year increase in seats this decade of 11%

Since 2007, Jeddah has recorded an average year-on-year increase in seats of 11%. As already stated, Jeddah had 22.7 million one-way seats in 2016, an increase of over 13% when compared to 2015. When analysing the graph below, one thing is very clear, international capacity from Jeddah is increasing at a much faster rate than domestic connections, with OAG schedules indicating that international capacity increased by close to 228% over the past 10 years, while domestic is up by 65%. 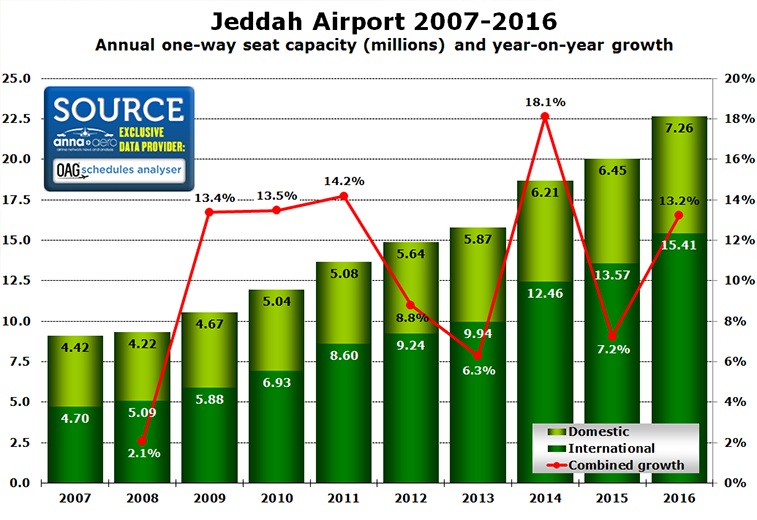 The latest passenger data that anna.aero has been able to track down for Jeddah is from 2015, with the airport that year handling 30,093,539 passengers according to the General Authority of Civil Aviation (GACA) for Saudi Arabia. This means that of the 81 million passengers that travelled through Saudi Arabia in 2015, just under 37% used Jeddah Airport, a drop of one point from the 38% market share Jeddah held in 2014, a year when the airport handled just over 28 million passengers. Using OAG schedule data, if we compare 2015’s passenger statistics against available seat capacity that year, it indicates that Jeddah’s average load factor that year was a little over 75%, the same that it achieved in 2014.

For 2017, annual one-way seat capacity from Jeddah is expected to pass 23.7 million passengers, up 4.8% when compared to 2016. However, schedules for the remainder of this year could still be altered.

One thing that is evident is the spike that Jeddah sees in capacity around Hajj, which this year is between 30 August and 4 September. One of the main features of Jeddah Airport that is known in the aviation community is its dedicated Hajj terminal. Specially built to handle pilgrims to take part in the rituals associated with the annual Hajj pilgrimage to Mecca, it offers many facilities and can accommodate 80,000 passengers at the same time. 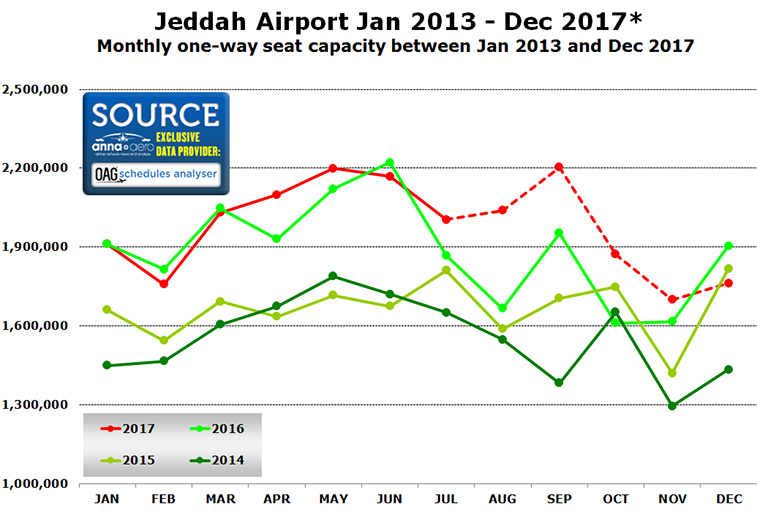 With the Islamic pilgrimage to Mecca being earlier this year, it has resulted in seat capacity for August being up 22% when compared to the same month of 2016, while September’s capacity is scheduled to be 13% larger this year. While there is a record amount of seats available from Jeddah this year, the average year-on-year increase in monthly seat capacity has reduced. For 2017, the average monthly increase in seats to Jeddah is 5.3%, down from the average of 13% last year, and 7.9% that was recorded in 2015.

Jeddah Airport’s leading carrier is national airline Saudi Arabian Airlines. The SkyTeam member occupies 54% of weekly seat capacity from Jeddah this summer, up from the 51% market share that the carrier occupied in S16. Overall the carrier has increased its weekly summer seat capacity from Jeddah over the past 12 months by 22%. Second to Saudi Arabian Airlines is flynas, with the LCC occupying 11% of weekly seats from Jeddah, a market share which has dropped from 15% in 12 months. One factor accounting for the latter carrier’s market share reduction is due to it seeing its weekly seat capacity at Jeddah shrink by 13% when compared to last summer. In S17 there are 53 airlines serving Jeddah. 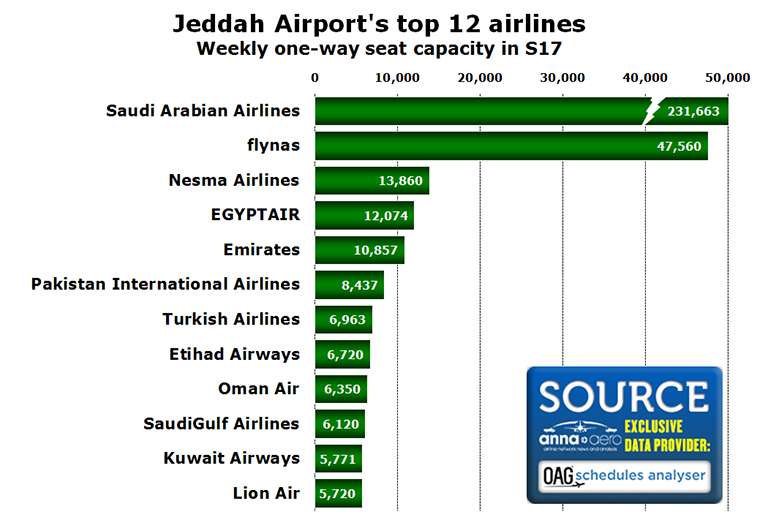 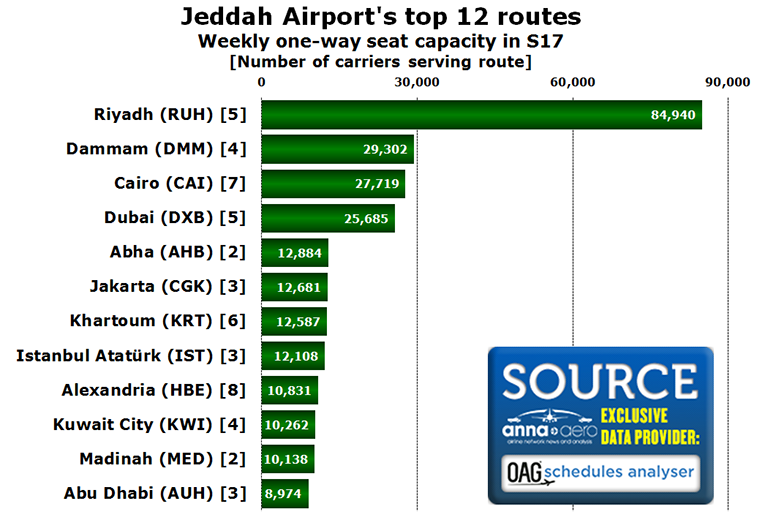 Jeddah’s leading international connection is to Cairo, with the Egyptian capital holding a 6.4% market share of seats. Cairo is followed by Dubai, with it occupying 6.0% of Jeddah’s weekly seats. In total there are 98 routes being served non-stop from Jeddah this summer.

When using OAG Traffic Analyser data to establish what the key unserved routes are from Jeddah, one thing is evident, the need for more flights to India. Jeddah’s leading unserved route is Kozhikode, with over 170,000 passengers estimated to have travelled between the two cities in 2016. This represents around 234 PDEW. Currently the Indian airport’s only direct link to Saudi Arabia is Damman. Etihad Airways is the leading connecting carrier for the Jeddah-Kozhikode city pair, with it accounting for 37% of traffic between the two airports in 2016. The second largest unserved route from Jeddah is Thiruvananthapuram, with this city pair seeing close to 54,000 passengers in 2016, around 74 PDEW. Saudia will be launching a twice-weekly service on this route from 5 October using its A333-300s.

Jeddah is currently going through a major expansion project. The new King Abdulaziz International Airport three-stage development started in September 2006, and is currently scheduled for completion in 2018. The new terminal, to the East of the current airport site, is designed to increase the airport’s yearly capacity from 30 million to 80 million passengers. According to the terminal’s architects, the design of the building has a strong conceptual form, with sweeping, curving lines and a cross-over structure resembling the crossing swords of the Kingdom of Saudi Arabia’s national emblem. 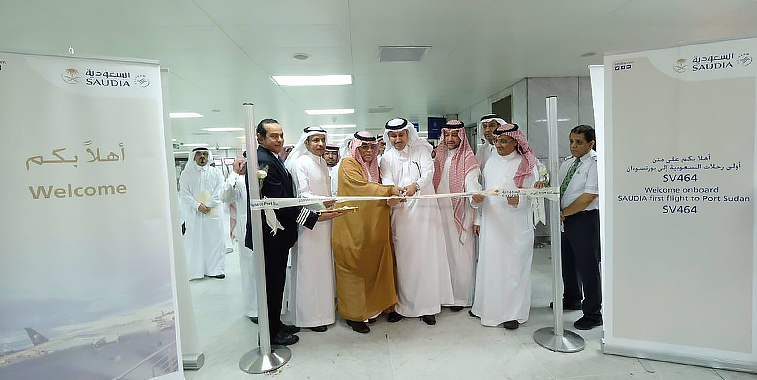