Primera Air gears up to join the low-cost transatlantic market – anna.aero analyses the demand behind the carrier’s new venture 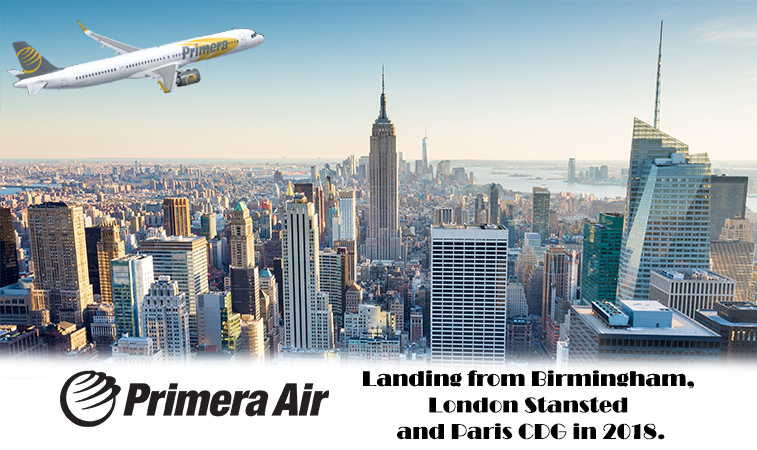 Primera Air is to premier in the low-cost long-haul market in 2018, preparing to enter the intensifying battle of the transatlantic market with flights from Birmingham, London Stansted and Paris CDG to New York Newark and Boston.

Primera Air has recently confirmed its intention to begin flights over the Atlantic to Boston and New York Newark, starting initially with flights to both destinations from Birmingham, London Stansted and Paris CDG, with routes scheduled to begin in April and May next year. All routes will be flown by A321neos, of which the carrier currently has an order for eight, plus two A321LRs, with deliveries expected in Q1 2018. It should be noted that the carrier also has a firm order for eight 737 MAX 9s. Flights to Newark will be flown daily from all three airports, with Boston being served four times weekly from the UK airports, and three times weekly from the French capital. With the news of the carrier’s transatlantic venture, Primera Air will join the list of airlines including Norwegian, LEVEL, Eurowings, WestJet and WOW air in offering low-cost long-haul flights to North America from Europe.

One of Europe’s most seasonal airlines?

Based in Scandinavia, Primera Air was initially launched to operate charters for major Scandinavian tour operators, but gradually it started selling tickets on some of its fixed charters in 2013. The continued success allowed Primera Air to increase both the number of routes and flight frequency, resulting in a mixed charter/scheduled carrier business model. Today the majority of Primera Air flights are scheduled, although some flights combine charter and scheduled passengers, and separate full charter flights are also operated. Currently the carrier has a fleet of nine aircraft; two 737-700s and seven 737-800s.

This year Primera Air will increase its annual seat capacity by close to 15% when referring to OAG schedules, with the airline expected to operate 1.24 million seats in 2017. However, what is very clear is the seasonality of the carrier, with its peak month of July in 2017 seeing 187% more seats than the carrier’s lowest month this year, December. 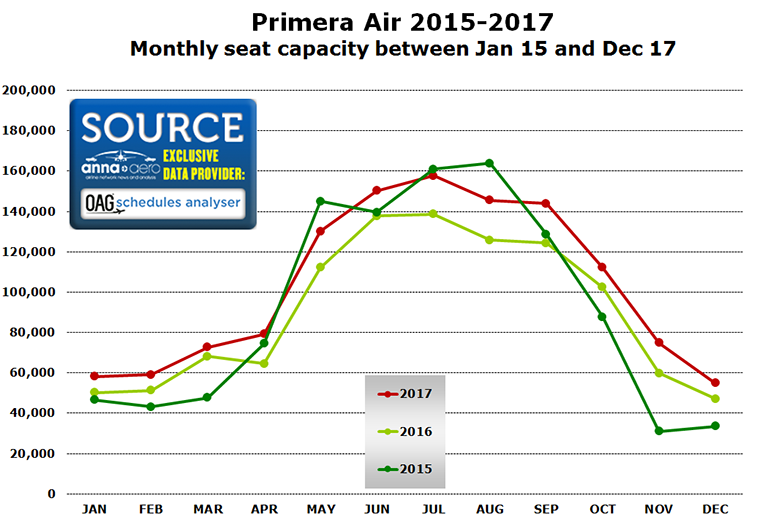 While the carrier has increased its seat capacity this year, the airline has done it sustainably, with it not increasing its seasonality profile. Instead it has grown capacity throughout the year, with all months except three (March, June and October) seeing double-digit growth in seat capacity.

Going to be tough to crack CDG

Now while services from both Birmingham and Stansted will not see direct competition, flights from CDG will go head-to-head with a number of airlines. United Airlines (twice-daily), La Compagnie (nine times weekly) and Delta Air Lines (daily) already link CDG to Newark, while Boston is served by Air France (13 times weekly), American Airlines (daily) and Delta (daily) this summer. There are also 60 weekly flights in summer between CDG and New York JFK, a route that is flown by LCC Norwegian four times weekly on 787-8s. So while Birmingham and Stansted are monopoly markets for Primera Air over the Atlantic, it will have a tough job cracking the market from the French capital, particularly with there already being LCC competition from Norwegian, which also links CDG to Fort Lauderdale and Los Angeles. The carrier will also in S18 serve Boston and Newark from CDG, along with routes to Denver, Oakland and Orlando.

What also makes it harder for Primera Air is that it does not have brand awareness in France or the UK, so strong marketing is going to have to be done if the venture is going to be successful. Currently the airline’s biggest market is Denmark, with Billund (14% of weekly departing seats) and Copenhagen (13%) being the carrier’s largest bases this summer.

The first route that anna.aero is keen to get a further grasp of is the connections from Birmingham and Stansted to Boston, services that have never been flown before and that Primera Air has stated it will operate year-round. While these services will also be launched from CDG, the market is already well defined, with Primera Air just trying to get a market share of what is already there, so anna.aero is focusing on just the routes from the UK in this analysis.

To get an idea of what the Boston market is like from the UK, we have looked back at the past monthly data to January 2015 to see how the destination has matured in recent history. What is evident is that the traffic between the UK and Boston, apart from Norwegian’s link from London Gatwick, is seasonal. The high month of travel from Heathrow to Boston (August) for instance sees 83% more traffic than the lowest month (February). Primera Air has stated that the new connections to Boston will be year-round, so with that it could be expected that the route reduces frequency in winter due to demand, or like Norwegian, it could stimulate winter traffic with its low fares. 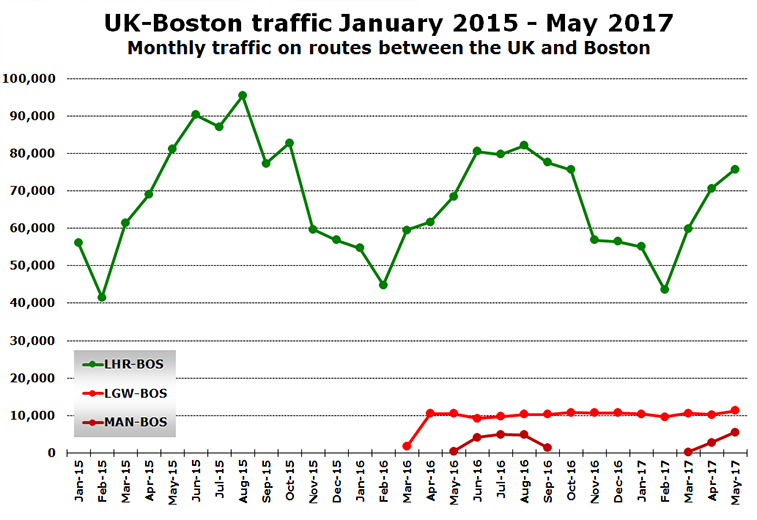 Looking at the statistics for January to May this year, traffic between the UK and Boston is up 17% when compared to the first five months of 2016. One factor helping this growth is Virgin Atlantic Airways joining Thomas Cook Airlines on the connection between Manchester and the US city in March, resulting in the seasonal route starting two months earlier than it did in 2016.

Of course Primera Air is not the first airline to enter the low-cost long-haul market to Boston from the UK, with Norwegian already connecting London Gatwick to the US city. Using a larger 787-8 on the route than Primera Air’s A321neos, Norwegian since its launch to Boston in March 2016 has averaged a monthly load factor of 89%, with it increasing from 84% in its first full month of operation to 94% in May this year when cross comparing CAA data with OAG schedules.

Now while there has not been a direct service between Birmingham and Boston before, when referring to OAG Traffic Analyser data, there is demand between the two cities. Around 8,700 passengers travelled indirectly between Birmingham and Boston from July 2016 to June 2017. Now while this only represents about 12 PDEW, what we need to consider is that this number does not take into account leakage to Heathrow, Gatwick and Manchester, while Primera Air could also stimulate demand with its new service. Currently the top connecting airports between Birmingham and Boston are Dublin (41% of traffic) and Reykjavik/Keflavik (24%). Trying to determine the demand from Stansted for Boston flights is more tricky due to its close proximity to Heathrow and Gatwick, along with the airport not having service from feeder carriers which Birmingham does. However, demand between London and Boston grew by 4% last year to over 892,000 direct passengers, while an estimated 47,000 passengers also travelled indirectly between the two cities last year.

One big benefit to Birmingham with the arrival of Primera Air is that it will take over from United Airlines on the route to Newark, a service which the Star Alliance member is ending after 20+ years of operation. The carrier had a monopoly on the city pair until American Airlines introduced services from JFK in May 2015. However, the introduction of the oneworld member did not dent United’s traffic flow too aggressively, with its average monthly passenger numbers dropping by just over 8% during the 21 months when American operated. Nonetheless, what the arrival of American did show is that there is a sizeable market between Birmingham and New York, with just under 150,000 passengers flying directly between the two cities last year (around 200 PDEW), up 6.1% on the total of 2015, and by a major 57% on 2014’s total of 94,000 direct passengers. One issue that Primera Air has is that it does not offer connections through Newark, unlike United. 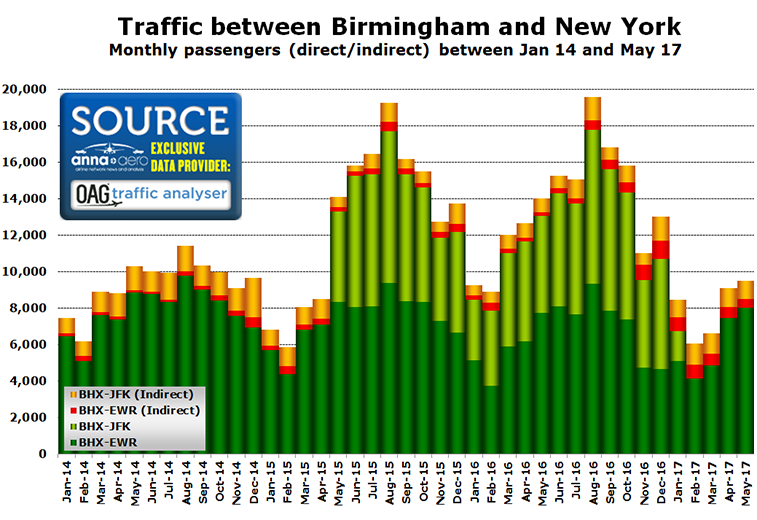 What is interesting to note about the demand between Birmingham and New York in recent years is that a sizeable proportion of the market still travels indirectly between the two cities. For the first five months of this year, on average 22% of monthly traffic has flown via another point when flying between the two cities, which is around 1,700 passengers per month. With this and the direct demand, there is roughly 224 PDEW between Birmingham and New York. Again like Boston, this demand also does not take into account the leakage to Heathrow, Gatwick and Manchester from Birmingham’s catchment. It is harder to forecast the demand between Stansted and New York, however London’s third largest airport has had direct flights to the Big Apple before. Up until 2008, Eos Airlines and MaxJet served an all-business class product, while American between October 2007 and August 2008 operated a daily 767 service from Stansted to JFK. The low-cost market is already served by Norwegian between Gatwick and JFK, with it increasing its frequency on its route to twice-daily soon to meet demand for its service.

Two more routes to be announced from all three bases

Primera Air has stated that it will confirm two further routes from all three of its new European bases by the end of S17 according to its press release of the initial operation. With that, anna.aero has looked to see what would be the most likely destinations for Primera Air to open.

Now, the range of the A321neos that will be operating these routes is 6,850 kilometres according to Airbus. This means that from the UK and France, it could reach as far as Raleigh-Durham (6,502 kilometres from CDG) and Chicago O’Hare (6,661 kilometres from CDG), but these destinations could be a push in relation to fuel contingency and weather. Based on this, anna.aero has concluded that Primera Air is likely to launch flights to Toronto and Washington from the three airports. When analysing OAG Traffic statistics, Toronto Pearson is the second largest unserved market in North America from Birmingham (after Orlando), with nearly 12,000 indirect passengers between July 2016 and June this year. This is on top of Air Transat offering a weekly service in summer between the two airports, with the Canadian carrier in 2016 carrying 12,000 passengers on the route, representing an average load factor of 88% when cross comparing with OAG schedules. Following San Francisco (fourth largest unserved market from Birmingham), O’Hare (fifth) and Los Angeles (sixth), all of which have been excluded for operational reasons, the next largest unserved market is Washington, with around 6,000 annual indirect passengers currently. Again, these numbers do not take into account leakage to other UK airports. 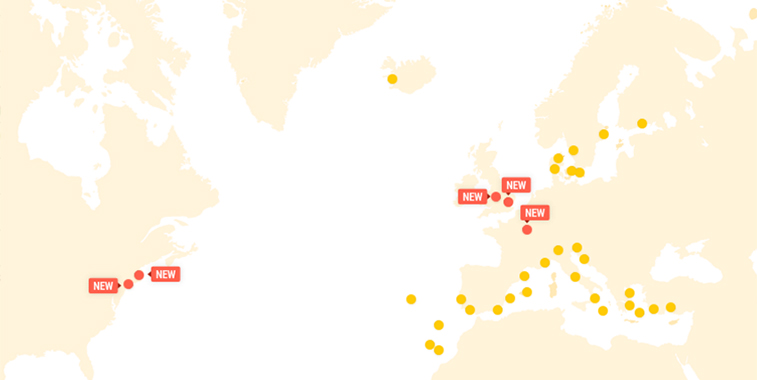 North America joins Primera Air’s route map. From next summer Primera Air will begin flights from Birmingham, London Stansted and Paris CDG to Boston and New York Newark, with flights to be operated on A321s. In 2017, the carrier will increase its annual seat capacity to 1.24 million seats, up 15% when compared to 2016.